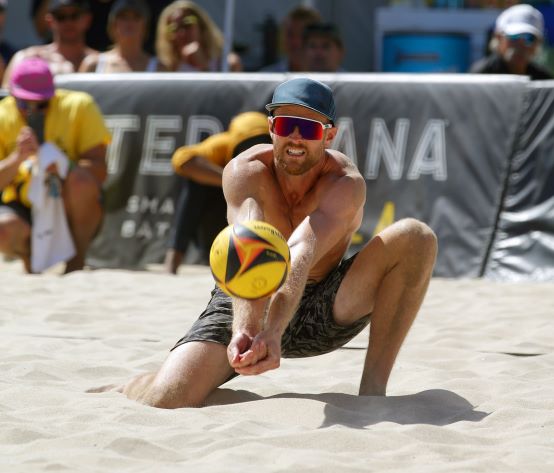 Sponcil, Cheng split after Tokyo, meet up in Hermosa finals

When an intense, complicated and seemingly successful relationship comes to a sudden and unexpected end, it’s tough enough to run into your ex on the street, at the grocery store or in a casual party setting.

But when you run into your ex in front of a few thousand wildly cheering volleyball fans with their loyalties divided between the two of you, it’s a hundred times harder, and at the same time much more exciting. The emotional antennae are up for reminders of past slights, and the adrenaline is flowing even more freely than usual in a competitive setting. 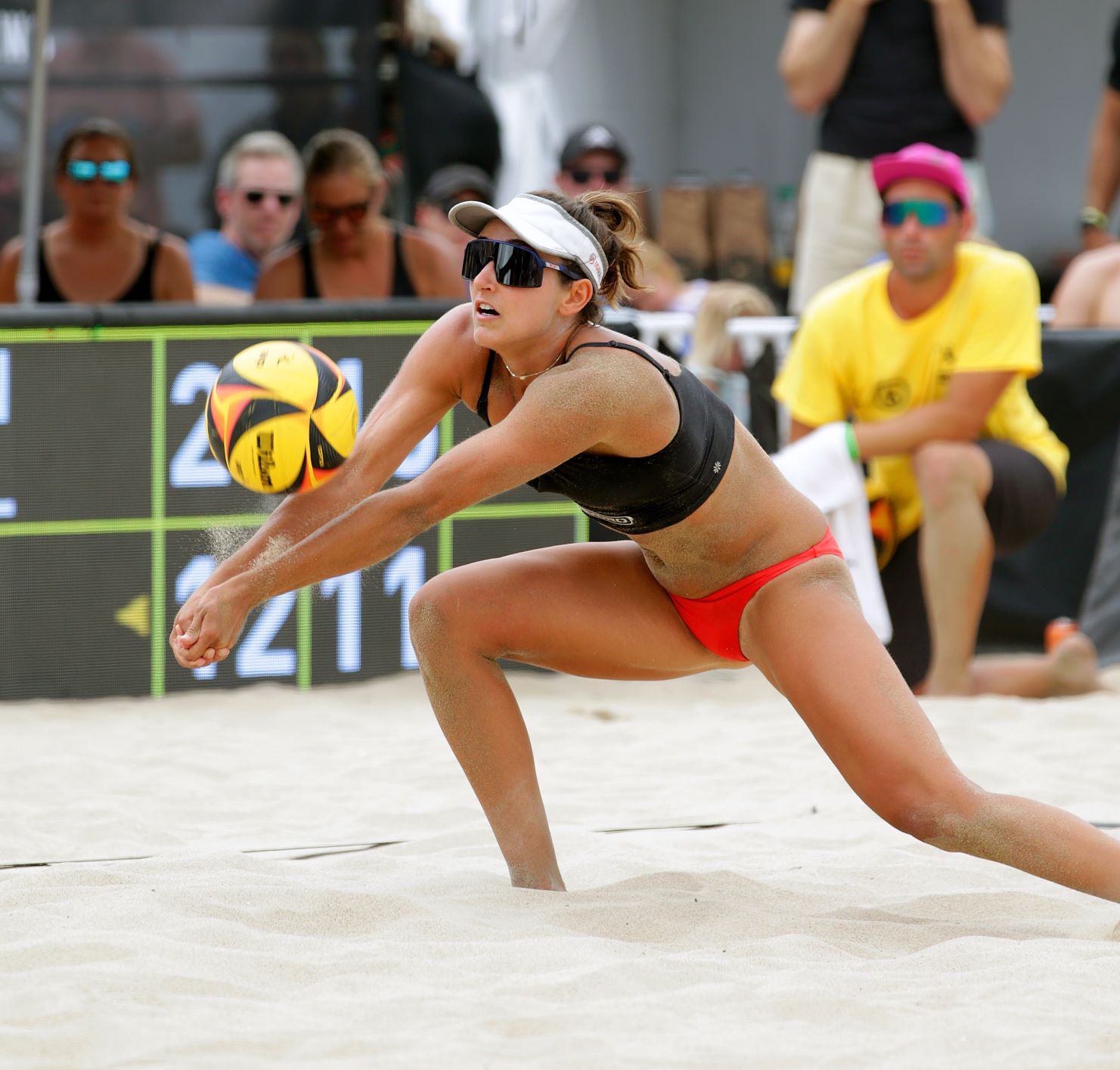 Sarah Sponcil registered 15 digs in the Women’s Final. This was just one of them. (Photo by Ray Vidal)

That’s the emotion-filled spot Sarah Sponcil and Kelly Cheng – formerly known as Kelly Claes, Sponcil’s partner on the second-best American beach volleyball team at the 2020 Tokyo Olympics – found themselves in when they met in the Women’s Finals of the AVP Pro Series Hermosa Beach Open Sunday afternoon.

Sponcil was clearly fired up even more than usual while Cheng looked tentative and a bit overwhelmed from the opening serve through the two-set wipeout that she had to endure.

Each of them was playing with a new partner – Sponcil with Terese Cannon, and Cheng with Betsi Flint – and were determined to show that they could carry on and even prosper without their long-time ex-partner, who just happened to be on the other side of the net.

Sponcil ended the 21-12, 21-15 victory with a vicious cross-court kill shot that landed deep in the corner just out of a diving Cheng’s reach. She leaped high in the air and let out a primal scream that showed the long-time Hermosa Beach resident took just a little more satisfaction than usual from an overwhelming victory that was never really close or competitive.

Pro volleyball insiders say Cheng has privately blamed Sponcil for their Olympic loss last summer, followed by the unexpected dissolution of their partnership. Asked directly about that after her quarterfinal victory Saturday afternoon, Cheng did not deny it.

“The girl has a lot of growing up to do,” Cheng said, referring to Sponcil. “Our breakup was a long time coming. The Olympic loss was just the last straw.”

Cheng then recovered from her burst of candor, and quickly added a sweetener: “But I wish her all the best….I could even see playing with her again someday.”

And she made one final point about the unexpected breakup of such a promising partnership: “After every Olympics, there’s a lot of shuffling around among players and teams. You have to keep that in mind.”

For her part, when Sponcil was asked about the breakup after her quarterfinal victory Saturday afternoon, she hemmed and hawed and finally admitted: “I’m not supposed to talk about that.” But she specifically denied that she has any growing up to do.

In the last two months leading up to the 2020 Tokyo Olympics, which were not held until the summer of 2021 due to the pandemic, Sponcil and Claes were the hottest beach volleyball team in the world. They were even hotter than the so-called “A Team” of April Ross and Alix Klineman who went on to win the gold medal, thus assuring their commercial viability for the next decade and their athletic immortality as Olympic champs.

And as for Sponcil and Claes, who came into the Olympics as the favorites based on their great results over the prior eight weeks? They lost a close three-set match in the round of 16 following a controversial call on a Sponcil serve, and finished without a medal at all. Or as the players like to say, they finished off the podium.

Two weeks after the Olympics, Sponcil and Claes told Easy Reader they had come up with a new team nickname – “Slaes” – to match the branding magic achieved by the A-Team nickname.

And they insisted they did not resent the A-Team’s victory in Tokyo.

“If it couldn’t be us, we’re glad it was them,” Sponcil said. “At least they’re an American team.”

“There’s a lot of mutual respect between us and the A-Team,” Claes said. “We hope to follow in their footsteps in the Paris Olympics.”

Sponcil, who is from Phoenix, Arizona, and now lives in Hermosa Beach, said the two were committed to staying together through the 2024 Paris Olympics.

She pointed out that both members of Slaes were only 25 years old, while at the time Klineman was 31 and Ross was 39.

“They’ve got 20 years on us. It’s pretty inspiring to watch the A-Team, so we’re happy to learn from them and watch them enjoy their success,” she said. “For now.”

But in the months after their Olympic loss, the blame game began and bad feelings started to fester. After all, the summer Olympics only come around once every four years, and it’s not easy to recover from a monumental letdown after such an exhaustive buildup, intense training and mental and spiritual preparation for the big moment.

After her Finals victory Sponcil was asked if she took any extra satisfaction in beating Cheng.

She just laughed, and moved on to the next question about her new partnership with Cannon.

“To do it with her is such a treat,” Sponcil said. “I love playing with her, and I hope there’s many more to come.”

The unspoken subtext was hard to miss.

Of course, the big victory by the top seeded team wasn’t all about Sponcil and her partnership-turned rivalry with Claes.  As well as Sponcil played while digging out bomb after bomb in the backcourt – she registered an amazing total of 15 digs — it was the taller Cannon’s domination of the close-quarters combat at the net that made the difference.

Over the course of the two sets, the 5-foot-10, 26-year-old registered five monster blocks and kept several other potential kill shots alive so that Sponcil could dig it out, and eventually win the point.

Cannon seemed just as excited as Sponcil was to get their first AVP tour win.

“I’ve been dreaming about this for a really long time so to actually go out and execute, it feels amazing,” Cannon said.

And she heaped praise on her new partner, a fiery competitor known for her bulldog style of play.

“She gets locked and loaded and there’s not a ball that can touch the sand,” Cannon said of Sponcil. “She digs everything and it’s absolutely incredible.”

This was the first Hermosa Beach Open since 2019. The pandemic forced AVP to leave the popular beach volleyball spot off the sharply reduced schedule the last two years.

Not surprisingly, the fans packed the grandstand all weekend, as if trying to make up for the two lost years. They reveled in all the familiar sights and sounds: lunging digs, laser-like serves, and clever cut shots, all performed to a relentless hip-hop soundtrack. And they responded with raucous cheers and unbridled enthusiasm every time AVP announcer Mark Schuermann asked them to do the wave or catch the mini-volleyballs being thrown into the crowd.

“COVID was just hard,” Sponcil said. “You get so much energy from the fans, whether they’re rooting for you or not rooting for you, it’s just a fun atmosphere. Beach volleyball is all about the fans and to have them back is great.”

“It’s just so much fun,” Cannon said. “There’s something special about Hermosa Beach.” 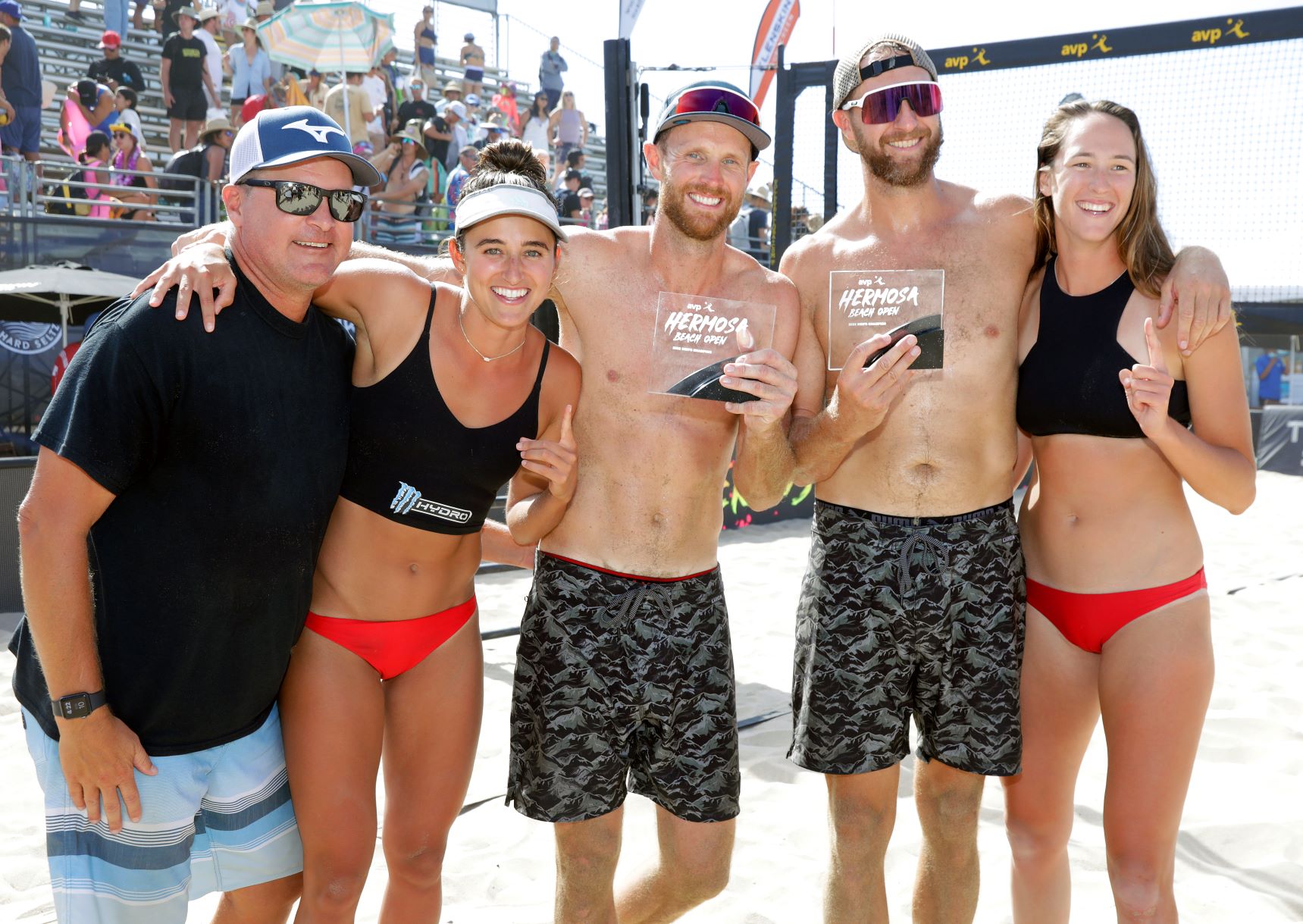 Two for two for coach Davenport

In the men’s final late Sunday afternoon, under a newly emerging sun that had been obscured by rolling fog most of the weekend, second-seeded Chaim Schalk and Theo Brunner finished a long journey by knocking off fifth-seeded Taylor Crabb and Taylor Sander – what Schuermann referred to as “The Two Taylors” – by a score of 22-20, 24-26, 15-9.

Although Brunner and Schalk were the second seed, they almost didn’t make it to the final. They dropped their second-round match on Friday and needed to win a pair of elimination matches Saturday afternoon, and then two more on Sunday morning just to reach the final.

When an exhausted but exhilarated Schalk and Brunner stood sipping beers under the hot sun moments after their hard-earned victory, they called on their coach Scott Davenport to pose for pictures with them.

Then they did something unusual: they also called for Sponcil and Cannon to join them for the victory shot with Davenport, who had just achieved a first for the AVP tour: he was the coach of both the men’s and women’s champions.

“I don’t think it has ever happened before,” Davenport told Easy Reader. “It certainly has never happened to me before, and I’ve never heard of it happening with any other coach.” ER 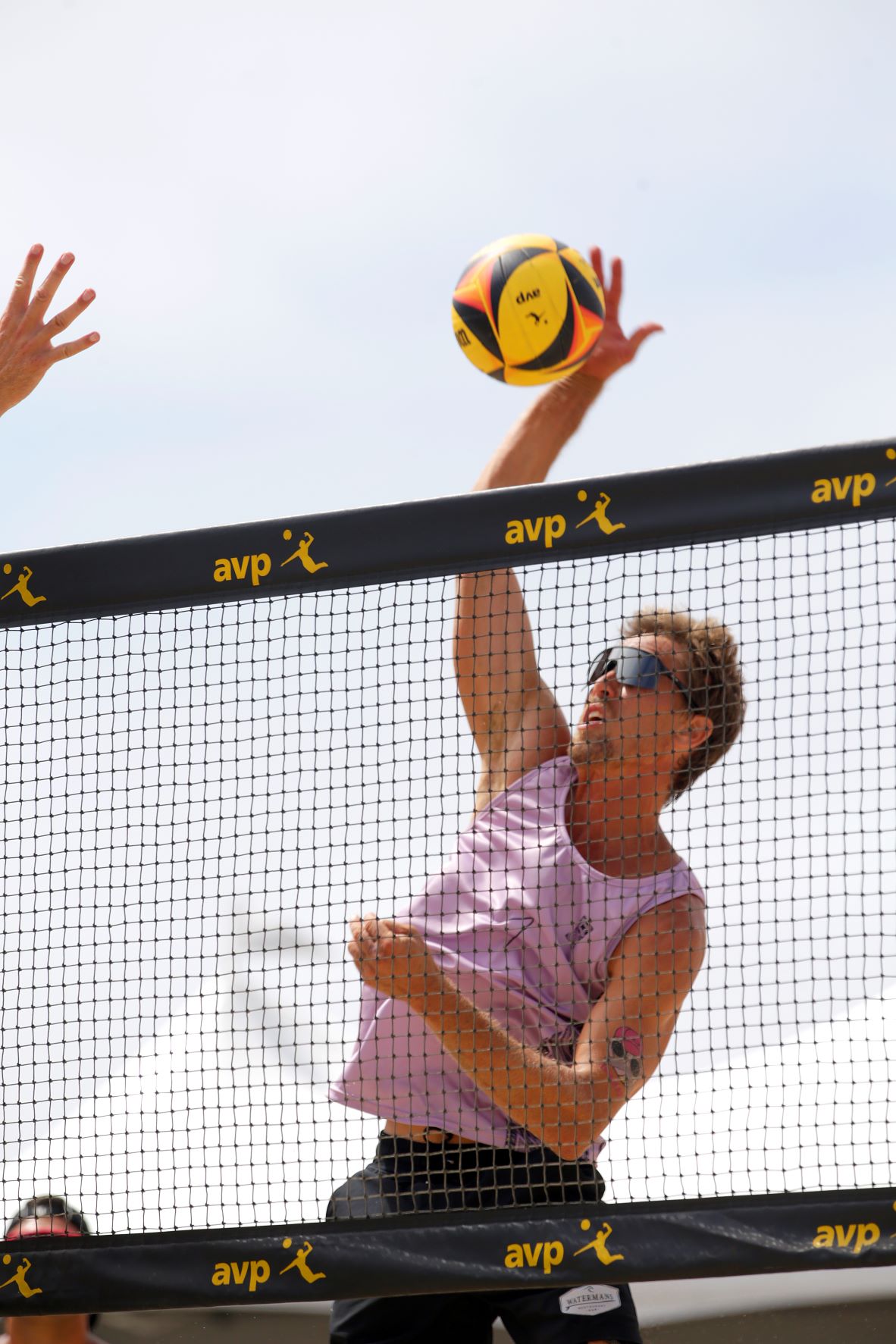 North Redondo Beach resident Taylor Crabb soars high for a kill shot, but it wasn’t enough to prevent a loss in the Men’s Final.