Orpheus and Eurydice: her point of view 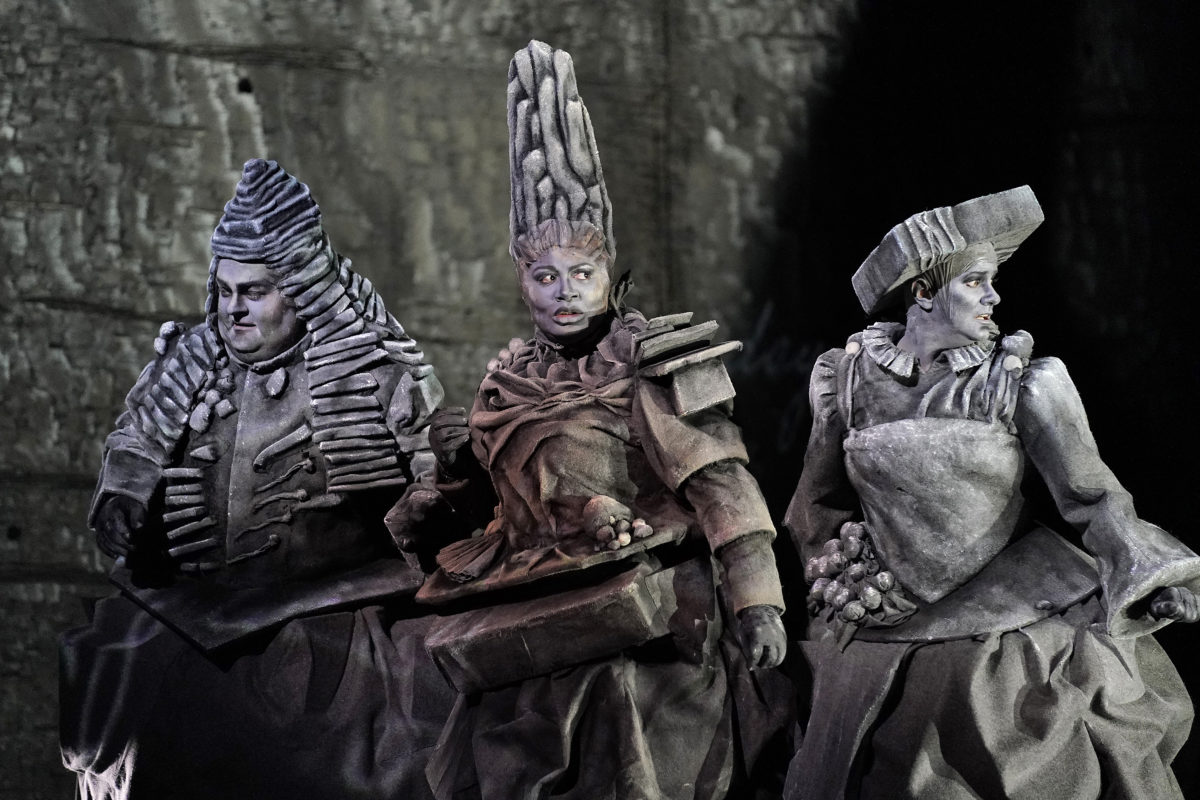 Writing an opera may be a solitary endeavor, but staging it with all its bells and whistles (from lighting and set design to costuming and, of course, the right singers) is a collaborative enterprise, and “Eurydice” now at LA Opera is an example of everything coming together just right. Matthew Aucoin wrote the music, Sarah Ruhl the score (based on her 2003 play), and Mary Zimmerman directed. It’s a world premiere, and very much worth seeing.

The myth of Orpheus and Eurydice, nearly as old as time itself, usually begins with Eurydice stepping on a viper on her wedding day. Orpheus, shredded emotionally, enchants Hell’s guardians (the dog Cerberus, the ferryman Charon, etc) with his lyre as he descends into the infernal regions to retrieve her. A few steps from daylight, he turns to make sure she’s behind him, and this voids the contract, as it were. With a gasp or a sigh, Eurydice fades from view.

Ruhl, with the then-recent death of her father on her mind, deepened the standard myth, and it becomes more of a modern meditation on remembering, letting go, forgetting, etc. Anyone who has lost a parent or a loved one knows that this is an Orphean journey in itself. 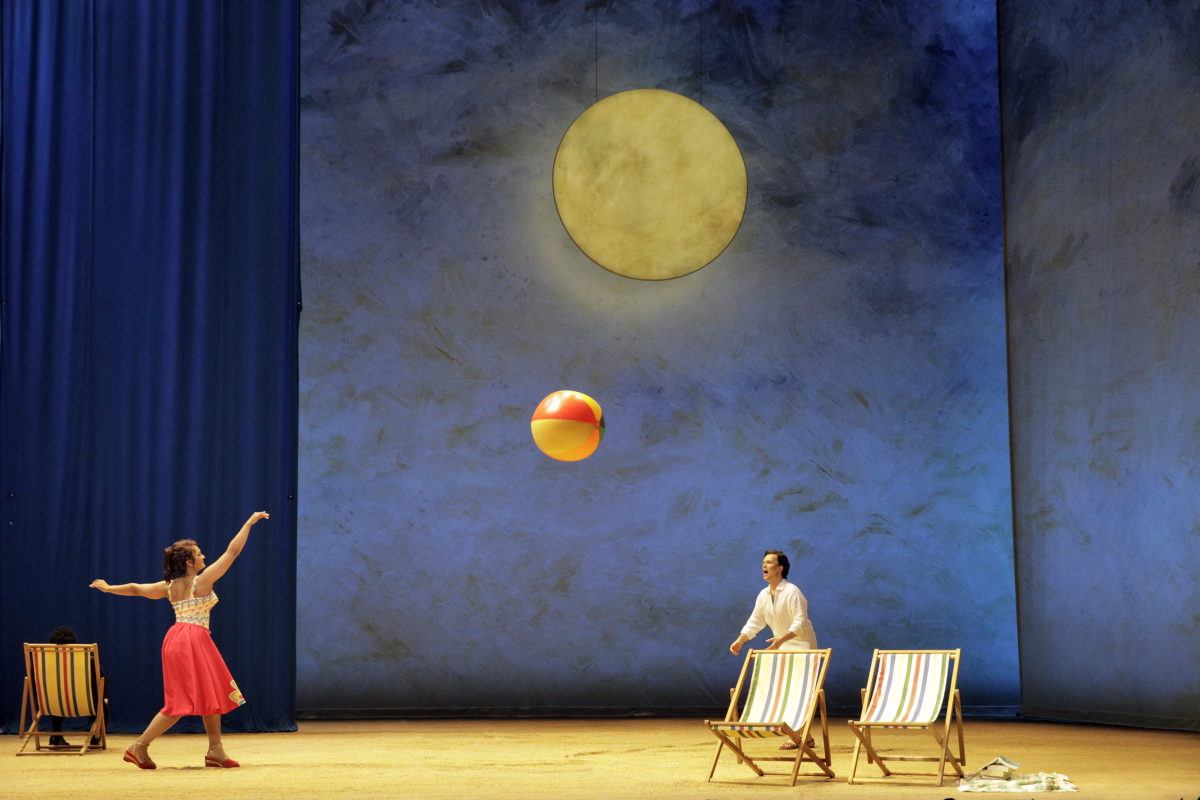 A sunny day at the beach: Danielle de Niese as Eurydice and Joshua Hopkins as Orpheus. Photo by Cory Weaver

The opera opens, with Aucoin conducting his own work, on a wide-open, brightly-lit stage that represents the beach, where Orpheus (baritone Joshua Hopkins) and Eurydice (soprano Danielle de Niese) are tossing a large beach ball back and forth. There’s a big yellow sun and a long blue curtain or arras that’s slightly moving to suggest a gentle breeze. Some people might find this scene a bit frivolous, but it’s necessary to point out how naive and untested the characters are at the beginning of the story, and to contrast where they will end up.

During the course of this initial encounter, Orpheus proposes to Eurydice and she accepts. We also note that he’s rather preoccupied with his own music, as songwriters or artists of any sort usually are. She, on the other hand, seems more bookish.

Meanwhile, wind of the impending nuptials gets to Eurydice’s deceased father (baritone Rod Gilfry), who writes her a letter. Delivering correspondence from the world of the dead to the world of the living bypasses clairvoyants and mediums in this case. The missive lands on the ground and is scooped up by “an Interesting Man,” who pockets it. We’ll get back to him in a moment. 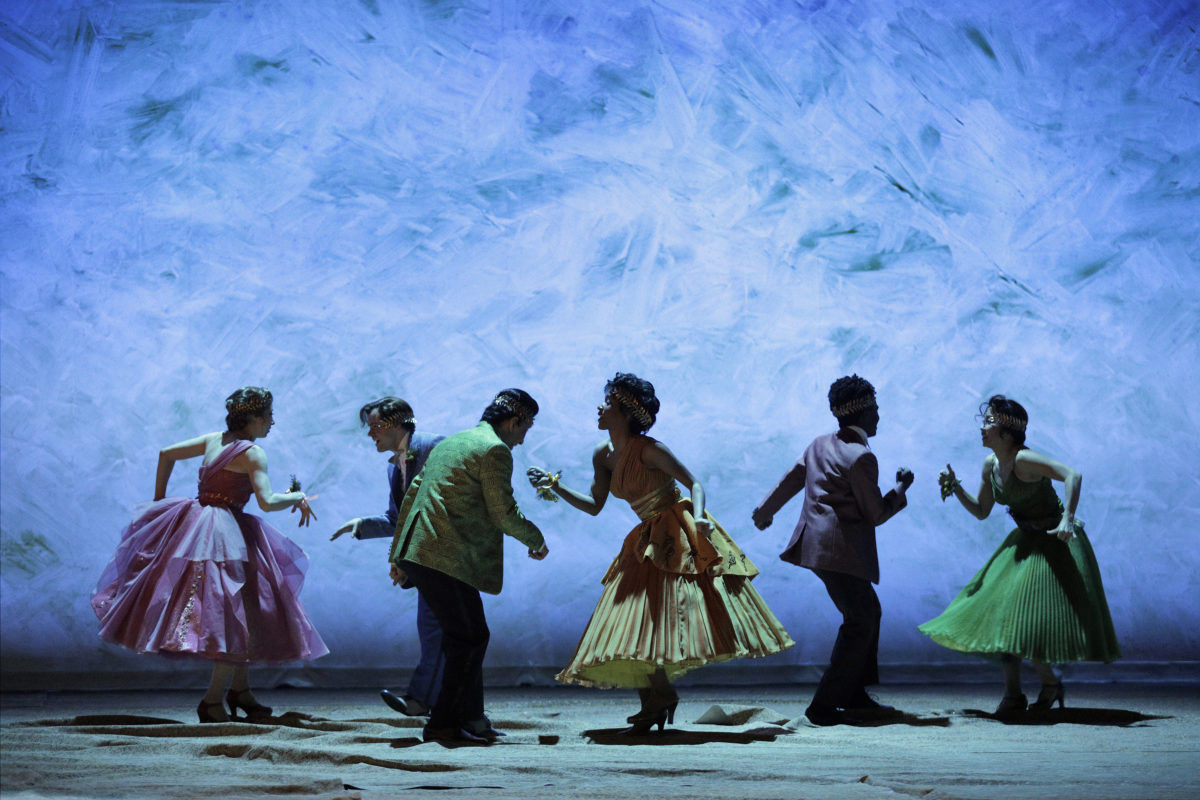 Orpheus and Eurydice tie the knot, and then the invited guests begin to jitterbug or whatever you want to call their dancing. The music here is lively and choreographer Denis Jones has made this a most amusing spectacle. But Eurydice gets fatigued and wanders out, thinking about her father. There’s a poignant line or two about how when a girl gets married she’s also bidding farewell to her father who is being replaced by her husband. That’s not to put an Elektra spin on it, as Freud might have, but to simply show how life soldiers on.

While wistfully mulling over past, present, and perhaps future, Eurydice is approached by the Interesting Man who tells her he has a letter from her father. He then says she’ll need to come up to his penthouse apartment so he can give it to her.

The interesting man, not surprisingly, becomes the creepy man, who then tries to seduce the young woman who has let down her guard. This scene seems to be a nod and a wink towards the recent #MeToo shakedowns and H.W. in particular. In some respects, the creators are a little late to the table on this. I mean, for how long must one beat a dead horse?

On the other hand, in the Greek myth, it’s when Eurydice flees from a lustful Aristaeus that she’s bitten (Who is Aristaeus? A beekeeper; and her nymphic maidens then destroy his beehives and kill his bees). In this rendition, she tumbles down a flight of stairs and dies. 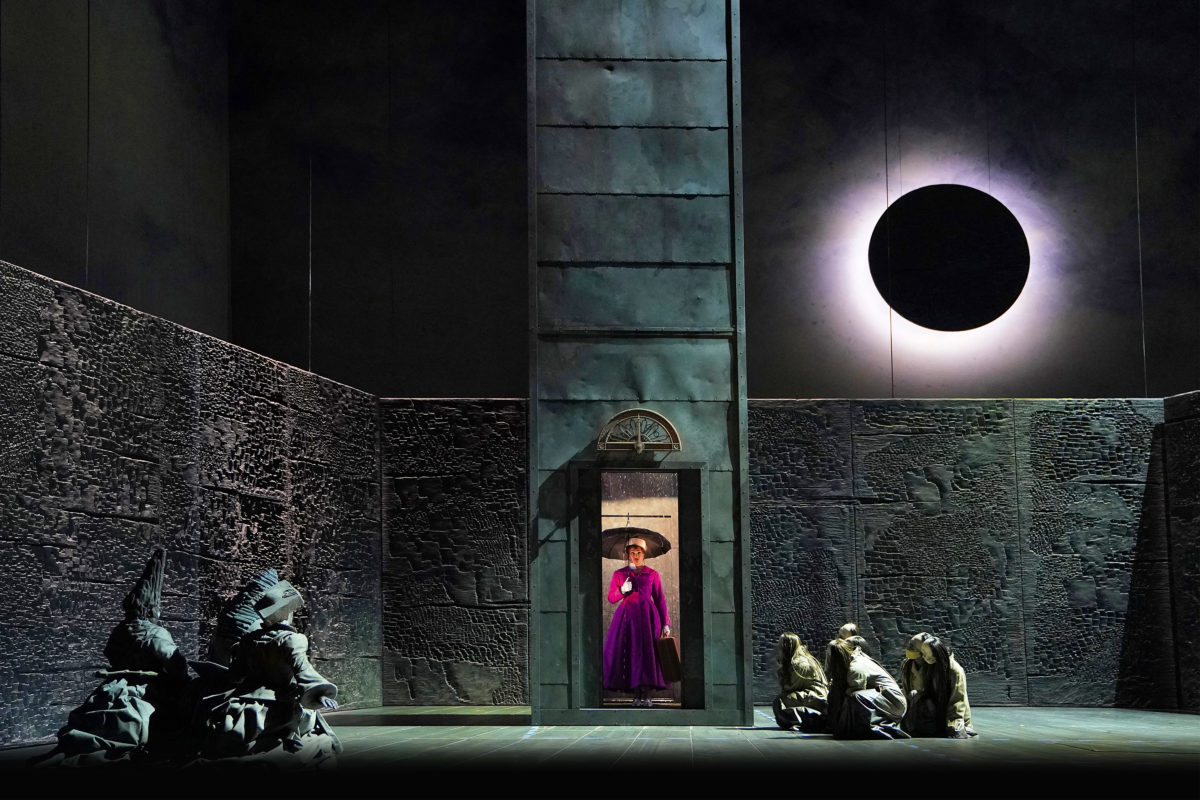 She emerges into the Underworld from an elevator holding an umbrella in one hand and a suitcase in the other. She’s wearing a bright lavender coat, which contrasts with the coal-shaded colors that now surround her. The rain that she apparently did not fully avoid represents the River Lethe, that is, the river of forgetfulness. Her memory slate is pretty much wiped clean.

However, her father recognizes her and tries to accommodate her to this new situation and, more to the point, revive her memory of him. Initially, she thinks he’s simply a porter. If you’re wondering, How come he’s aware of who he is and who she is, et cetera, it’s because he held his breath when dipped into the waters of forgetfulness. 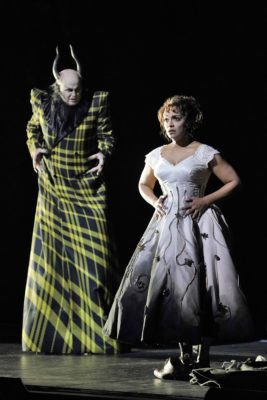 The Interesting Man noted above turns out to be none other than Hades, the Lord of the Underworld himself (tenor Barry Banks). Now Hades, or Pluto as the Romans called him, was a pretty somber fellow by all accounts, but in this opera he’s part jester, part joker, with only a twist of the sinister to match his twisty tail. In other words, he’s closer to the Mephistopheles of “Faust” than Hades as dark and brooding. What he reminds me of is Samuel Ramey’s performance of the Devil in LA Opera’s production of “The Damnation of Faust,” by Berlioz, presented earlier this century.

He’s not the only one bringing us a dose of comic relief. We also have the heavily-costumed Little Stone (Stacey Tappan), Big Stone (Raehann Bryce-Davis), and Loud Stone (Kevin Ray). They’re a stand-in for the standard Greek chorus, with a slightly goofy element thrown in.

Needless to say, these shifts in mood demand a corresponding shift in musical styles, and Aucoin delivers exceptionally well on this account. In fact, his musical range (clearly he’s absorbed ideas from many sources) makes me think he’d be perfect as a soundtrack composer. There are twists and turns here in his writing, and some of it’s so lively that it seems to want to scoot on ahead of the story. Perhaps unintentionally it underlines how slow opera itself can be, since operatic phrasing and singing can at times move at almost a glacial pace.

I don’t want to neglect Orpheus’s double (countenor John Holiday), who represents that part of Orpheus which is his musical persona or soul. This is an interesting addition to this opera, and opera in general, and even more so when the singers part ways late in the opera because Orpheus has chosen his wife over his music.

Lamenting the death of Eurydice, Orpheus charms his way musically into the Underworld, as noted. The three Stones tell him that singing is prohibited because it disrupts the dead (somewhat ironic to hear in a work in which everyone’s singing to begin with). Then later he’s told that he can only sing in a dead language. And so, in what is a pretty clever move all the way around, Orpheus sings a few phrases in Latin. 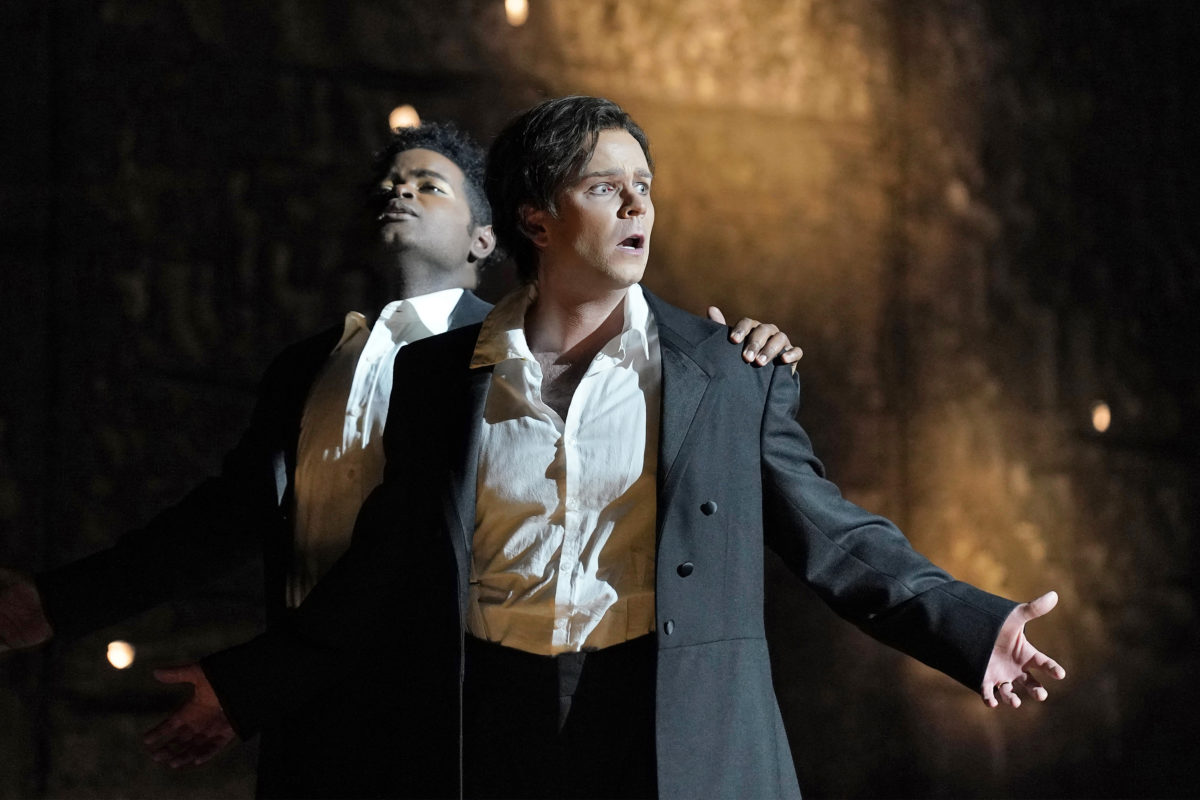 By this time, Eurydice has regained (through the help of her father) some of that lost memory, and she’s allowed to follow Orpheus out of the gopher hole and into the sunlight. But two things happen not far from the top. One, she’s not really sure it’s Orpheus, and two, she’s not so certain she wants to desert her father. In her confusion, she calls out her husband’s name: He then turns around and, well, you know what happens next.

So now what? Should he try again? If at first you don’t succeed…

I’m reminded a little of the 2002 remake of “The Time Machine” when the forlorn inventor goes back in time to change the past and keep his wife from being killed. But she meets her end in another way. The moral? You can’t outsmart Fate. 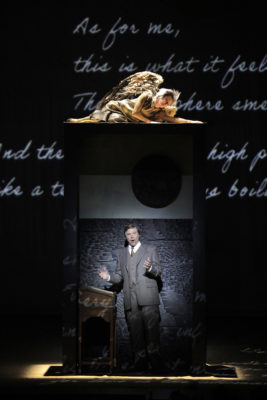 Orpheus does try again, but before he makes the descent a couple of crucial events have taken place and given a “Romeo and Juliet” spin on the narrative. Believing that his daughter has returned to the land of the living, Eurydice’s father purges the memories from his head. He removes them, symbolically, by shedding his outer clothes, one piece at a time. Then he enters the waters of forgetfulness. This is a well done sequence on every level, with some of the haunting poignancy that concluded the ending of LA Opera’s “Dido and Aeneas.”

He is discovered by his daughter, her hopes of being able to share his company dashed for good. Hades wants her for his bride (Why her and why not, say, Helen of Troy, we’re not sure), and she asks for a few minutes to compose herself. She then writes a letter to Orpheus, urging him to remarry, and adds instructions for his future wife on how to care for him. She leaves the letter for Orpheus to find, then enters the waters (represented by a shower stall) of forgetfulness. Orpheus arrives, but his memory has already been taken from him. Even if he found the letter, he wouldn’t have been able to read it. Now, all the threads between the characters have been cut.

As you see, we’ve come a very long way from that sunny, carefree day on the beach. What is at times during the course of the production pleasant and droll, ends up as tragedy, or at least sobering reality.

Of the singers, many of us have been seeing Rod Gilfrey for at least the past quarter-century. He remains as impressive as ever. Joshua Hopkins doesn’t truly showcase his talents until after reaching the underworld, but when he does it’s kind of like a late-inning surprise. Barry Banks is irritatingly inviting as Hades, by turns amusing and sinister. Without a doubt, though, it’s Danielle de Niese who’s the real real draw here. She has plenty to sing and many emotional states to go through, but she rises to the task and gives a splendid performance.