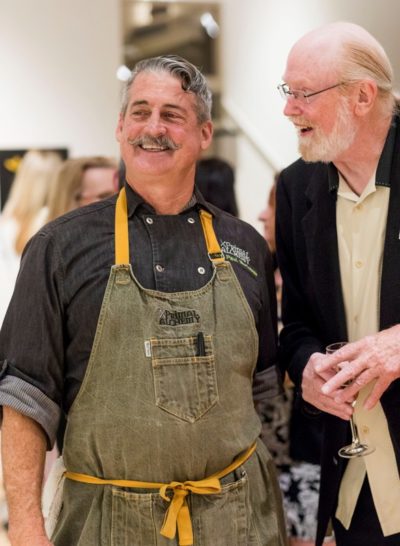 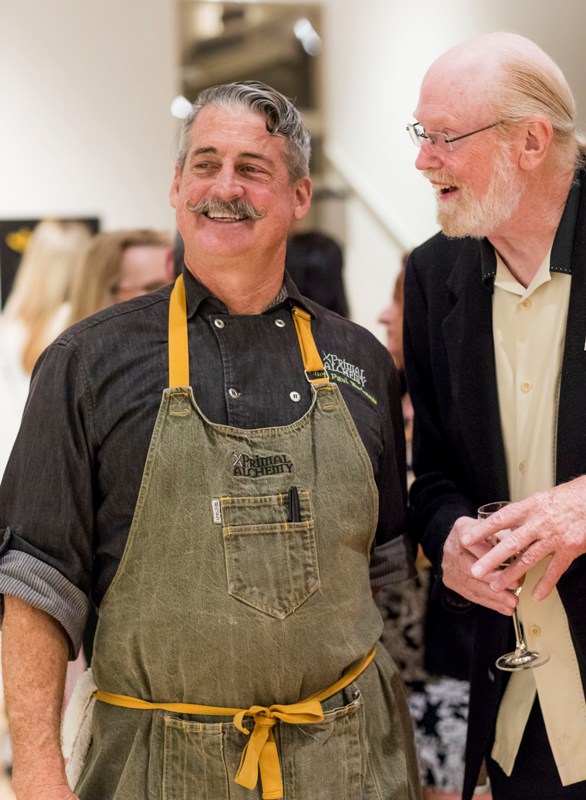 On March 16, the Palos Verdes Art Center hosted an examination of the natural environment of the Peninsula by artists of two unrelated disciplines. One was visual art: the opening of a show of plein air works painted amid nature, tranquil landscapes that are sometimes sun-drenched, sometimes brooding. These were exhibited near technical drawings by the Olmsted brothers, the property developers who shaped the Peninsula into the place we know today. Together they highlighted the way a rugged, treeless hill was sculpted into a Mediterranean fantasy, an overlay of one continent on another.

The other element of the evening was a dinner utilizing both foraged and farmed items from the neighborhoods in the paintings. To Chef Paul Buchanan, who consulted Tongva tribal culinary historian Craig Torres, the pairing made perfect sense.

“The style of Plein Air is about a sense of place. You’re painting something in its own location… As plein air involves capturing the sense of a place with paint, we’re doing it with food.”

For Buchanan foraged ingredients are the elements of his art, while to Torres they are a connection to his culture. The Spanish systematically broke the links between native peoples and their traditional foods to make them dependent. The farmed vegetables and proteins supplanted a culture of sustainable harvesting. Torres is lyrical when he reflects on his people’s traditional practices.

“Our life cycle was dictated by the seasons, what we harvested and gathered. The Los Angeles basin was our world. We had variety because the area probably has the most diverse flora of any place in California. You can go 10  miles in any direction and end up in a different environment. Our culture was based on alliances, intermarriage, and trade, and there was something in every ecology [to barter].”

The flavors of California native plants weren’t as varied as the crops that were brought by the conquerors, he admitted.

“My ancestors’ diet would be regarded as pretty bland today. We didn’t have a lot of ways to spice our food, or any items that had much sweetness. It wasn’t part of our culture, so we savored the simple, natural goodness of what we foraged and grew. To introduce people to traditional foods we come up with recipes that mix them with familiar things, but we focus on the simple flavors in their basic form.  We want people to transition to rediscovering things that are usually covered up. It’s almost like developing a relationship with your food, because you learn about those flavors over time. ”

Striking a balance between the simplicity of the native diet and our modern cravings was Buchanan’s job, and he is uniquely qualified to do it. He met Torres at a native cooking event in downtown Los Angeles about a decade ago. 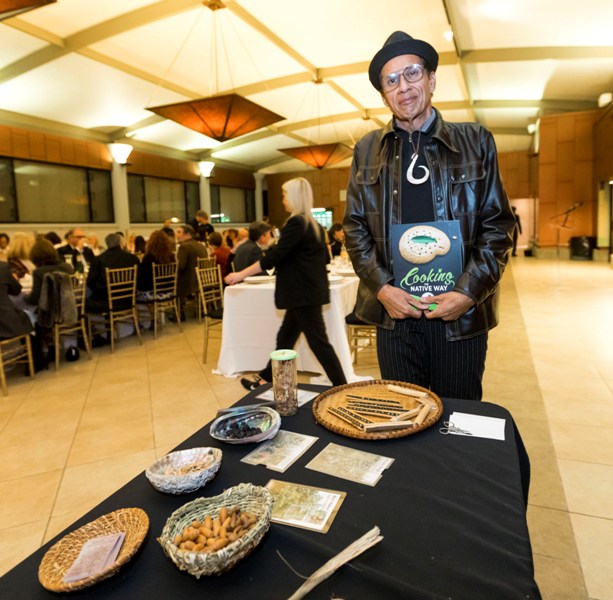 Buchanan is the founder and chef for Primal Alchemy catering, based in Long Beach. As he describes it, “We were local, seasonal, and sustainable before it was a fad.” The chef, who spent his youth in Thailand, trained in San Francisco along with a cohort of chefs who explored the flavors of foraged items and neglected crops. Buchanan adopted and extended their ideas. This includes traditional methods of food preservation, necessary in climates that offer bountiful harvests in one season and little or nothing in others.

“I was exposed to foragers and to the food preservers who were looking at pickling for the modern age, and it shaped what I do. I’ve been teaching a program called “Days of Taste” to fourth graders for 17 years, and part of it is showing them that food comes from the ground, not a grocery store.

In the case of Palos Verdes, that includes ingredients that most people don’t consider to be food at all.

“The prickly pear is everywhere, and we made a vinegar out of it for the ceviche. The stinging nettle is delicious in soup, and there is a local guy here who brings them to the farmer’s market when we ask for them. He may regard me as the guy who buys weeds, but he’s happy to sell them and I’m happy to buy.”

Those crops are generally available, though obscure, but there are problems with trying to present wild foods in a commercial setting. A sudden cold snap or unexpected rain can shift what is available, scrambling the plans of a chef who has a particular dish in mind.

It’s a problem Torres knows well, and he sometimes had to improvise when presenting programs about the indigenous diet. He is a member of a Tongva tribal group called the Chia Café Collective, which started as a seed and food bank for tribal elders. The workers talked and traded recipes, learning so much that they eventually collaborated on a cookbook called “Cooking The Native Way.” Despite the name the group doesn’t own a restaurant, or want one, both for practical and ideological reasons.

“We don’t have enough of our traditional foods to supply our own communities, much less start a food business. The environment has become degraded, the native plants choked out by things that were introduced either deliberately or accidentally. We still utilize the plants we can get, either by harvesting them or buying them. You can get chia seeds at almost any market, but not acorns or cattails. We have so few areas to harvest that when we see any under threat we’re concerned. We have a relationship with those plants, that environment, that make us activists on behalf of the few remaining places where the ecology hasn’t been tampered with.”

Even if they could find reliable supplies of native ingredients, Craig says that they would leave opening cafes to people like Paul Buchanan who want to be in the culinary business. The Chia Café Collective has a loftier goal.

“I tell people that we aren’t caterers or cooks, we’re not a nonprofit; we’re a philosophy. We’re trying to get people to refocus their cultural lens on some questions. What is their relationship to their environment, to the indigenous here who have survived for thousands of generations? We’re asking people to renegotiate their relationships with nature. We want them to eat things from here instead of thousands of miles away. We encourage people to rip out their lawns and put native plants there, and then they can eat from the land. It looks like it’s about food, but it’s about your relationship with the world.”

Interviewed separately, Buchanan echoed some of the same themes in equally passionate language.

“We want to remind people that there is food right at their feet, and most of us don’t open our eyes and look at it. There’s mallow growing everywhere and it’s a great green, less bitter than arugula. I’ve got kids in my Days of Taste class that I teach every year, and when they find that this weed is edible they eat it by the handful. It’s a great resource, one of many that we don’t use. That’s what this PV Wild event was about, a look at the resources that were historically there and how they were used.”

Those visual artists who created the works in the show were out in force, and before the dinner they stood near their work and answered questions. An interesting element of the show was the display of draft sketches of many pieces so that viewers could see experiments that led to each finished piece.  This window into the creative process is not one that chefs can easily present, because diners are generally only interested in trying the best version of any dish they create.

The painters, chef, and cultural historian all had things to say about the natural landscape of the Peninsula, and each hopes to continue the dialog in their own way. They all absorb lessons from their environment and express them as both individuals and representatives of their cultures, and their interactions with each other may shape their art in unpredictable ways.

The Plein Air exhibit at the Palos Verdes Art Center has closed. Chia Café Collective events may be found on their Facebook page.