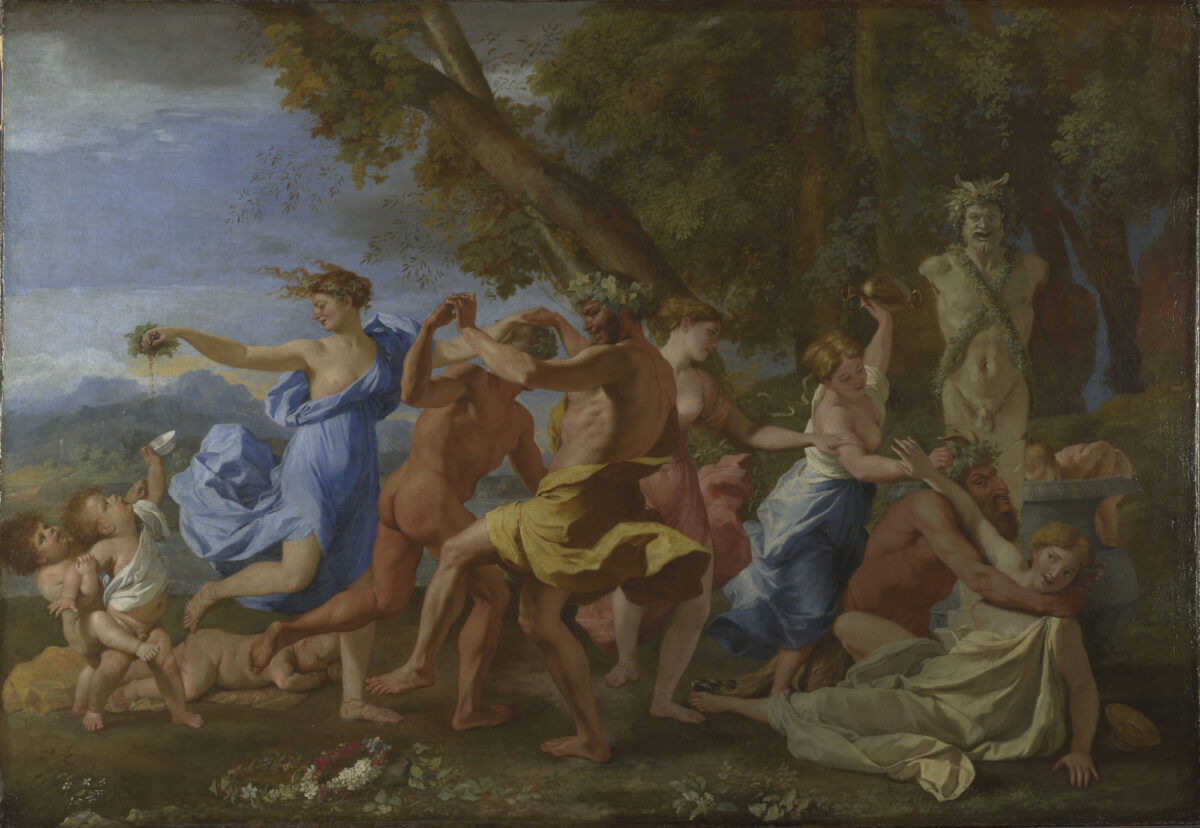 Nicolas Poussin and Antoine Watteau at the Getty

Let’s do this chronologically, with Nicolas Poussin (1594-1665) the subject of “Poussin and the Dance,” just opening, and on view through May 8, at the Getty Center. To my surprise, I’ve read the entire catalog by Emily A. Beeny and Francesca Whitlum-Cooper. Why was I surprised? Because I’m not a card-carrying fan of Poussin, who painted in the Classical tradition, and at first the only good thing I could praise him for was his splendid use of the color blue.

If you’re going to write about art, however, you’ve got to do so with open eyes and an open mind. So I plowed ahead, and in the process learned a thing or two. I’m still not a fan, but that’s okay; you don’t have to like an artist to see the value of their work.

“Poussin and the Dance” is devoted to the decade-plus that Poussin, who was born in Normandy, France, spent in Rome painting groups of dancers, mostly in pagan settings, between 1624 and 1637. After that he went on to less frivolous subject matter.

The authors of the catalog admit straight out that Poussin hasn’t exactly been perceived as a lively, enticing, or provocative painter. There’s no stepping around that fact, and most of the works in the book and the show are cringingly artificial, with half-clad revelers drinking, prancing, and just farting around. But let’s look beyond that, shall we?

Beeny writes of Poussin that “Portraying dancers allowed him to work through the problem of arresting motion, to explore the expressive potential of the body, and to devise new methods of composing his pictures.”

And, later, Whitlum-Cooper adds this: “Dance takes place in the round. It entails the movement of bodies through space, and its successful representation in paint or on paper requires an understanding of the mass and balance of forms and a sophisticated ability to render both buoyancy and weight.” It’s her contention that Poussin was “seeking to emulate in paint the qualities he so prized in antique sculpture: volume and proportion, physicality and weight.”

Those two quotes tell us all we need to know about what Poussin set out to achieve, but it should be noted that the artist used wax figurines—Anthony Blunt called them his “wax corps-de-ballet”—as models, the way a kid might arrange toy soldiers on the dining room table. And he got very good at this, by the way. For example, the figures in “The Triumph of Pan” (1636) form a complex calligraphy of curves and colors. If we spend enough time eyeing his “Birth of Venus” (1634-35) the visual choreography really pops out. Say what you will about him, Poussin knew a thing or two about composition.

I shouldn’t give the impression that everything Poussin painted was just fun and games, and this brings us to another Beeny essay, “Choreographing Violence: The Abduction of the Sabine Women,” which was a go-to theme for artists since it allowed them to paint muscular Roman soldiers picking up (physically, not in bars) and carting off young Sabine women. The subject has mostly appeared under the title of “The Rape of the Sabine Women,” which was the aim and outcome of the abduction, so I guess either word, rape or abduction, conveys that it wasn’t a pleasant afternoon for the Sabine community. 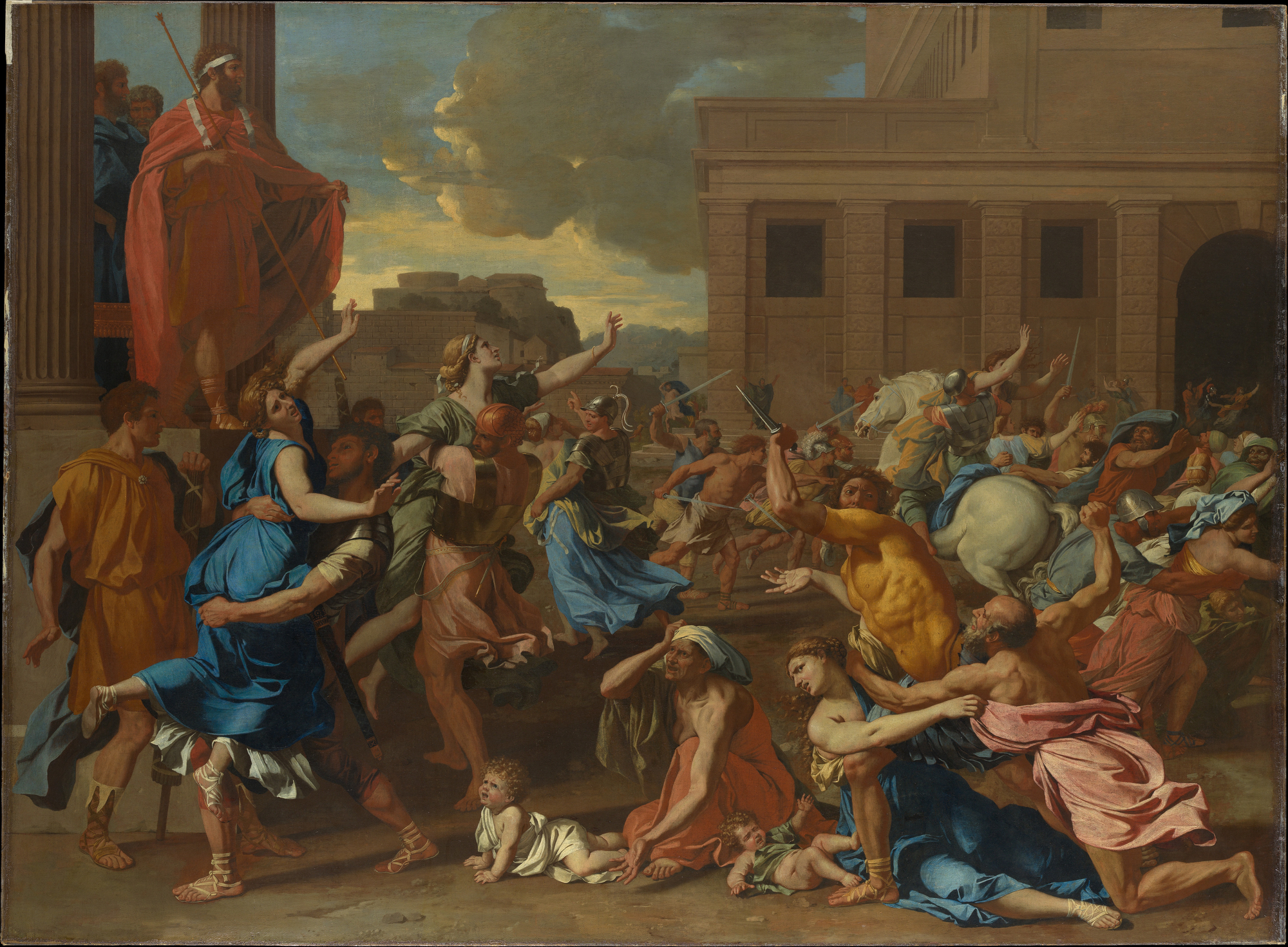 Despite the extreme possibilities for illustrating the subject, Poussin’s abduction pictures (he did a couple variations) are more like a frenzied, freeze-framed ballet (or frieze-framed in his case) that, in keeping with the book’s focus, has been choreographed. No explicit violence is depicted, but again the composition is noteworthy. And speaking of noteworthy, in the late 1880s Edgar Degas spent upwards of a year copying “The Abduction of the Sabine Women,” and his painting now hangs locally, in the Norton Simon Museum.

The exhibition is a collaborative effort between the National Gallery, London, and the Getty, which also means that a few pictures are in one venue and not in the other. That’s standard. However, one impressive work, “A Dance to the Music of Time,” which portrays four young dancers representing the eternal cycle of poverty, labor, wealth, and pleasure, didn’t leave London. That’s what catalogs are for. It’s also an incentive to put another entry on your bucket list of places to visit.

In my younger years, when I didn’t know better, I looped Antoine Watteau along with Boucher and Fragonard as the purveyors of silly and frivolous work best suited for an old folks’ home. That my own father owned one such print (“Ceres”) made it an uphill battle for me. It may have been Watteau’s “The Embarkation for Cythera that finally helped turn the ship around. 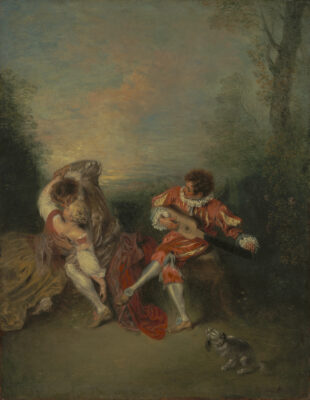 In her monograph about the painter, Iris Lauterbach summed up Watteau’s thematic spectrum: “Theatre and masquerade, fêtes galantes, amorous conversations in imaginary landscapes—and the sad clown.” Much of his work, I think, is comprised of festive scenes but projected through a sad lens or filter. A wistful gaiety, if you will. He paints as an outsider, as one who is close by but somehow excluded from the fun.

Which brings us to “La Surprise,” whose emergence from a private collection in 2008 was something of a surprise itself. After being exhibited here and there the Getty made an offer for it and acquired the work in 2017. They already owned another Watteau, “The Italian Comedians” (c.1720), which was purchased 10 years ago.

To mark the 200th anniversary of Watteau’s death (1684-1721),a small exhibition centering around “La Surprise” opened at the end of last year and it comes down in a few days.

“La Surprise” was painted in 1718-19 and can be considered one of the artist’s fêtes galantes, pictures which were, as Richard Rand puts it, “open-air gatherings of fashionable elites conversing, flirting, and making music, sometimes augmented by characters drawn from the company of the commedia dell-arte.” Like garden parties for the rich and famous.

Watteau may not have enjoyed a long life, but he did have a fruitful one in that he left behind over 200 paintings and as many as 4,000 drawings, of which fewer than 700 of the latter survive.

“To make a finished picture,” writes Emily A. Beeny, “the artist selected individual figures from unrelated drawings and painted them in harmonious juxtaposition.” This mix-and-match of stock figures pulled from sketchbooks wasn’t particular to Watteau; other artists did this, and in a way it’s reminiscent of Poussin’s use and reuse of wax figures for his compositions. 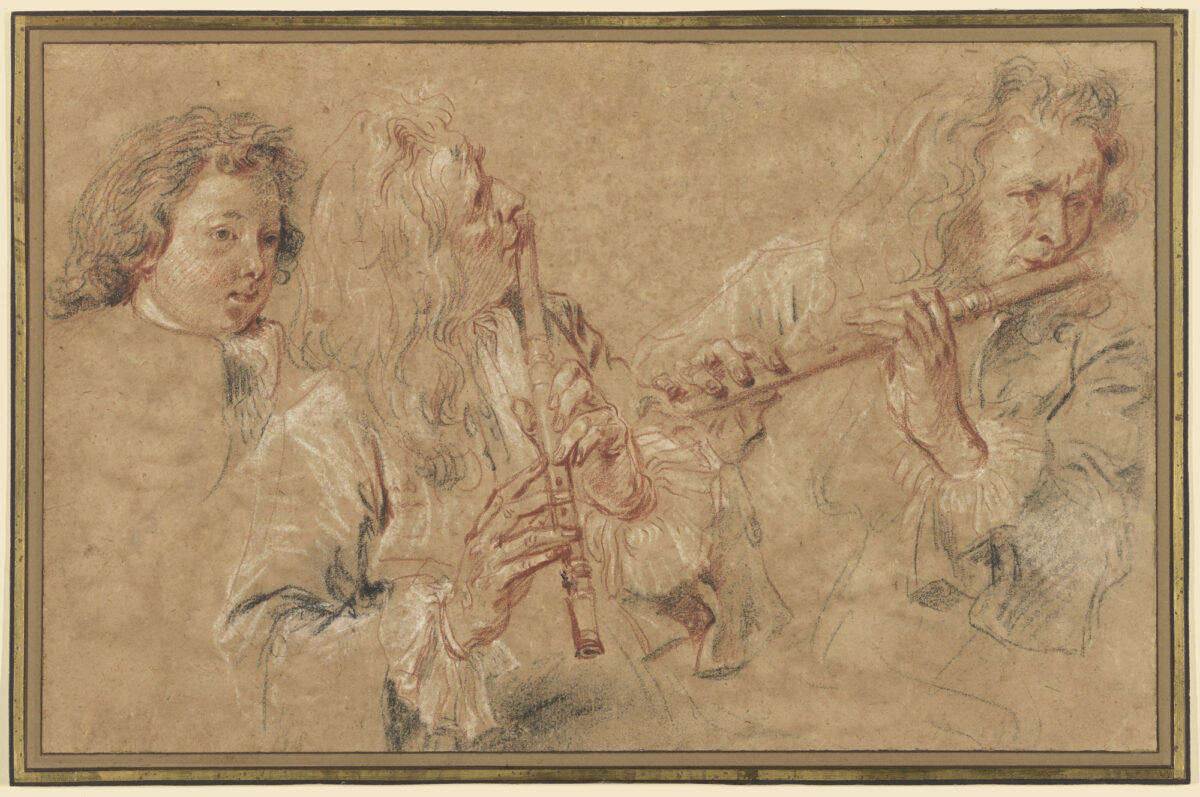 The catalog is small and concise, only 76 pictures, with contributions by Rand, Beeny, and Davide Gasparotto, but its delving into the history of a single work will remind some readers of the Getty’s former “Studies on Art” series. Along the way, we learn various interesting tidbits, for example that “La Surprise” was painted on one-half of the same carriage door as “L’Accord parfait,” which also ended up on the West Coast… in LACMA, just a few miles across town. Several other Watteaus have also ended up in Southern California, and what would the artist say about that if some time traveler could go back to Paris and tell him?

One thing the catalog doesn’t discuss is that little dynamic ball of passion formed by the embrace of the two lovers in “La Surprise.” Then the woman’s right arm drops down to her boyfriend’s ankle, the momentum of which is picked up by the foot of the musician and conveyed up his body. The placement of the three figures has a heartlike shape which doesn’t seem accidental and thus could be a clue as to what the musician is thinking. Also, we shouldn’t dismiss the symbolism of the little dog on the bottom right. People two centuries ago could read these signs a little better than we can today.

“La Surprise”: Watteau in Los Angeles runs through Sunday, although “La Surprise” will be sticking around for many years to come. Poussin and the Dance is on view through May 8.