Fritto Misto in Hermosa Beach offers pasta for everybody 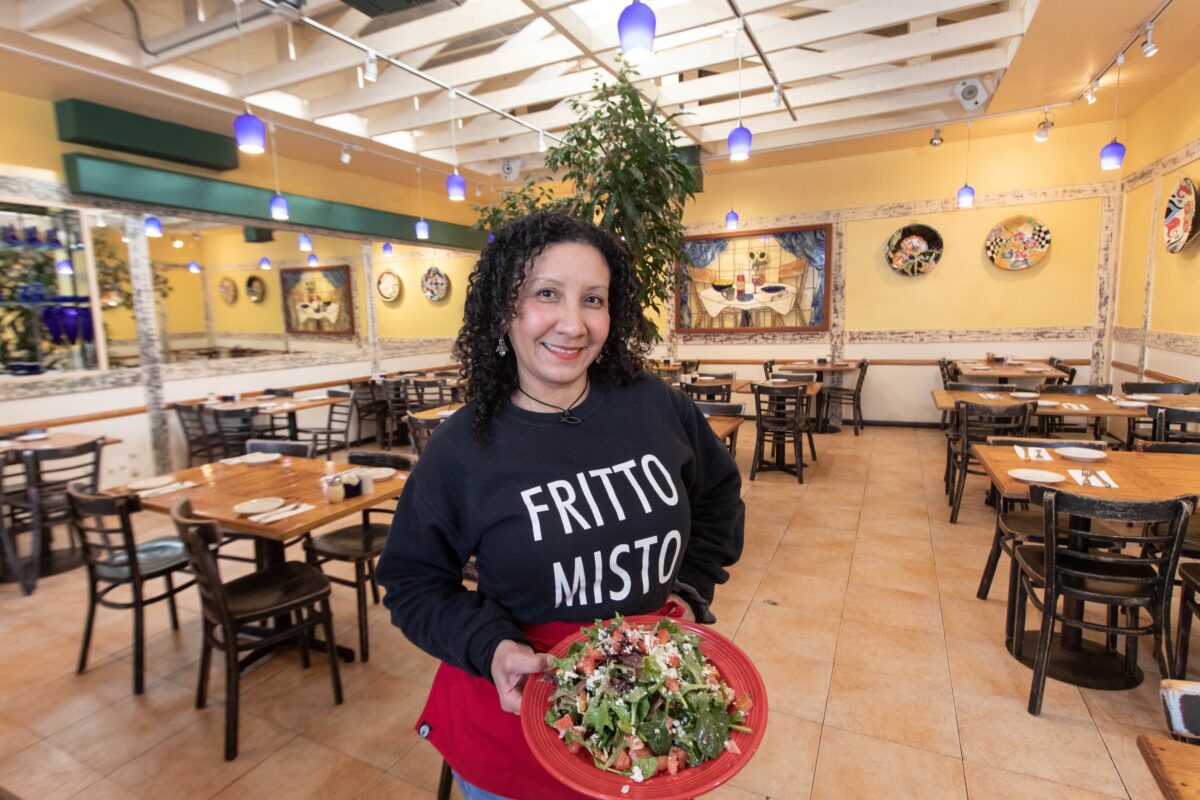 I have only known one person who disliked pasta in all of its forms – my father. During World War II he was a crewman on a destroyer escort where a vast amount of the stuff had been loaded by mistake. To hear him tell it, everyone suffered through meals of over-boiled pasta for a month, and when he stepped ashore, he never wanted to see the stuff again. We visited Italy on a group tour when I was a child, and I remember his look of sorrow every time it was served.

That example aside, most people do enjoy pasta, and it’s somewhere on just about any menu, as spaghetti, ramen, dumplings, spaetzle, mandu, pancit, or whatever. It follows that a restaurant serving pasta and almost nothing else might be a great hit. A local restaurant does just that even though they’re named after something that has no dough in its composition.

Fritto Misto is Italian for “mixed and fried,” and in the US that usually denotes seafood and vegetables that are coated with seasoned flour and tossed into the deep fryer. This is the case in coastal regions of Italy around Genoa and Naples, but elsewhere in the country it may include chopped meat and cheese or be almost completely vegetarian.

Fritto Misto is also the name of a restaurant that opened on Pier Avenue in 2001, the offshoot of a popular Santa Monica eatery. The tabletops made from dismantled wine crates, bright interior with decorative ceramics, and tall plants commanding the center of the atrium combine to make it a comfy space. Many staff members have been here since opening and greet regulars. It’s obviously a local hangout.

The pastas at the heart of the menu range from traditional to eccentric, and include the dangerous-sounding atomic pasta — New Orleans pasta served over tabasco linguini, and gnocchi stuffed with artichoke pate. Many people take advantage of the choose-your-own option, which allows you to select from 10 types of noodles or five types of stuffed pastas, and combine them with any of 14 sauces and 23 vegetables and meats. Those who don’t eat pasta have the option of putting all these toppings over sauteed vegetables, which is a boon to those on special diets and picky eaters. It’s safe to say that anybody can find something they’ll enjoy on this menu.

Before they attack the pasta, they’ll probably want a starter. They won’t need one, since portions here are substantial, but there are some salads that are intriguing. The greens and gorgonzola is a mix of organic lettuces, cheese, and toasted walnuts that is rich and satisfying. Their caesar is decent, but I recommend the Misto house salad. This is a mix of julienned carrots, lettuces, baby greens, and tomato with both walnuts and pine nuts tossed with a balsamic vinaigrette. The sweetness of the carrots and tomato is more prominent than the greens, and a small grind of pepper enhanced that balance. Ours arrived drenched in dressing, so I’d advise asking for that on the side, but otherwise it was very good. Salads here are available in three sizes, and the small one is enough for a starter for two.

A daily soup is offered, and on a recent visit this was potato-zucchini puree with hints of bell pepper and onion. It was pleasantly warming the same way that a good chowder is, and if it happens to be offered when you’re there I’d recommend it. I could have had a bowl of this and their good crusty bread, and called it a meal, but there was more to explore.

Fritto misto is also on the starters menu as an appetizer, though they note that the portion serves two to four people. They’re not wrong, because what arrives at your table is a giant mound of breaded and fried calamari and shrimp along with zucchini, broccoli, and artichoke hearts. The batter is referred to as spicy on the menu, but seasoned is a better adjective, because it’s not hot. It’s served with a zippy cocktail sauce and some garlic mayo, plus slices of lemon that enhance the seafood. We ordered this and a pasta as main courses for two people and shared both, and it’s a fine way to dine here. 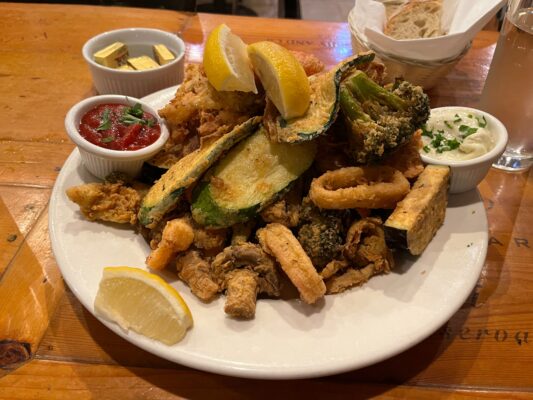 An appetizer of fritto misto at Fritto Misto. Photo by Richard Foss.

On our two most recent visits we selected a daily special of sweet potato ravioli with spinach in cream sauce, pasta pancetta with whole wheat mafalda, and vegetarian lasagna with Bolognese sauce. I was going to order their meat lasagna, but our server mentioned that the meat version has a heavy bell pepper flavor, while the vegetarian iss more in balance. It was a bit odd to order a vegetarian item and then put meat sauce on top of it, but it was a good call. The Bolognese was a light pink sauce rather than a heavy red and was mildly seasoned, and those who enjoy it zippy may ask for chili flakes on the side. I didn’t, because I was pleased with it just as it was.

We were less happy with the pasta pancetta because the Mafalda noodles were starchy and chewy. This is often the case with whole wheat pasta, which is notoriously difficult to cook with a result anything like its less healthy brethren. I know it can be done, because I have had it, but even pros can get it wrong. It might have been better with a different sauce, perhaps olive oil and garlic or checca, but the very rich garlic cream sauce accented the heaviness of the pasta. I suspect that I would have enjoyed this sauce along with the tomato fettuccine that is recommended as a combination, and would try it again that way.

The sweet potato ravioli were the star of both recent meals, the creamy sauce with butter and wine accenting the pasta pillows stuffed with vegetable puree. It was a simple item very well executed, and that’s the heart of Italian cooking in a nutshell.

To accompany our meals, we had wine from the rather short list, which could use some updating. The white section consists of one Sauvignon Blanc, two Chardonnays, and a Pinot Grigio, and in the two decades that Fritto Misto has been open a lot of very good Italian whites have come on the market at modest prices. The Folly of the Beast Chardonnay was actually quite good, but we would have enjoyed more choices. The red list was only slightly better, but we benefited from a daily special, a Carlin de Paolo Barbera that was good enough that I’m going to hunt for some bottles for home.

We tried only one dessert, a winey, velvety tiramisu that would have been over-sweet but was balanced by a sprinkling of cocoa powder. I usually prefer a less sweet version with a bit more texture, but this one worked nicely.

The portions at Fritto Misto are generous while the prices are modest, with many entrées below 20 bucks for a portion that will have you reaching for a to-go container. This is not a place that you take someone to impress them with anything other than the fact that you know a nice reliable locals’ spot, but for everyday Italian style dining, it’s a hit.