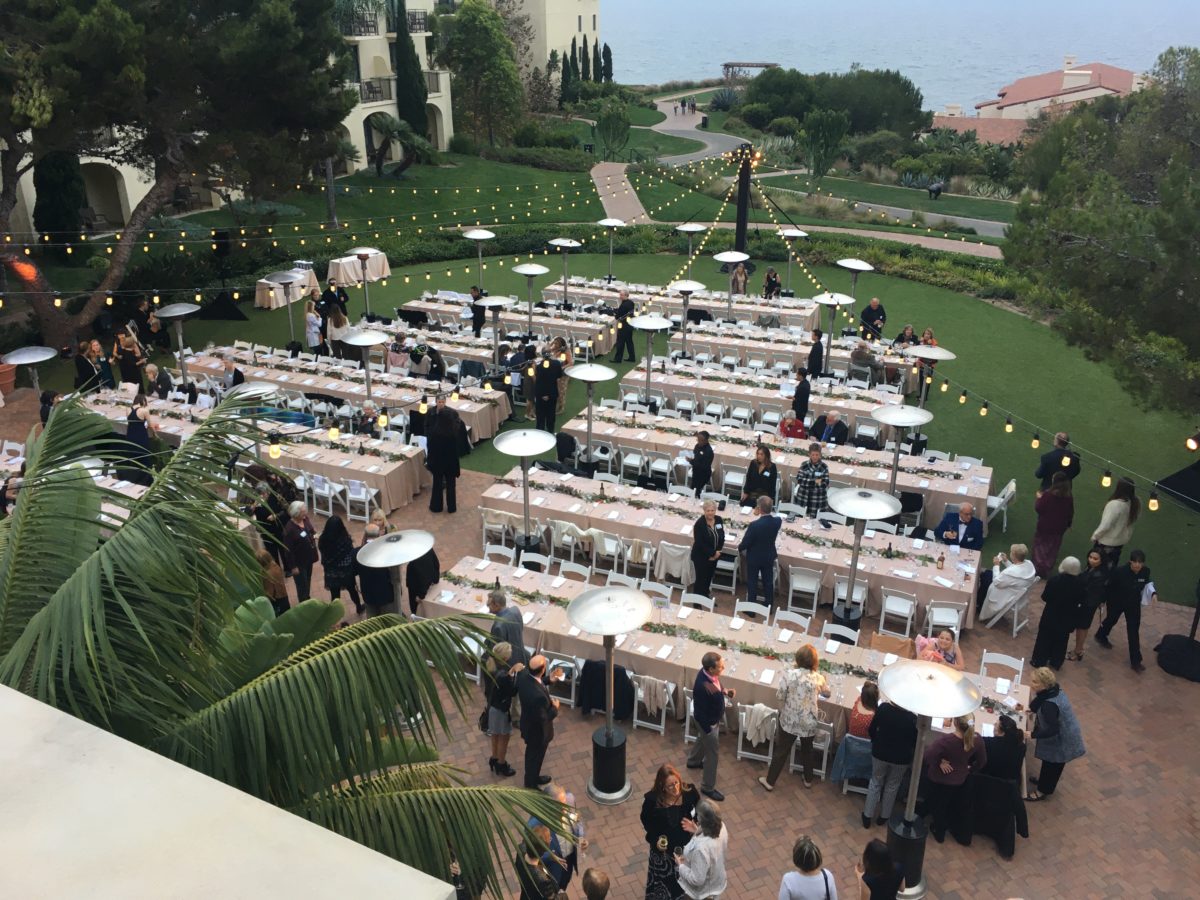 An overhead view of Terranea’s event space as attendees mingle with wine and cocktails. Photo by Richard Foss

If you just look at a map, it might seem unlikely that any event in Palos Verdes could legitimately be called pastoral. On all sides save the ocean to the southwest, dense suburbs dominate an artificial landscape. Nevertheless, the name is appropriate for a Palos Verdes Peninsula Land Conservancy event, because the fact that any open natural space remains in the area is a tribute to that organization’s three decades of service. 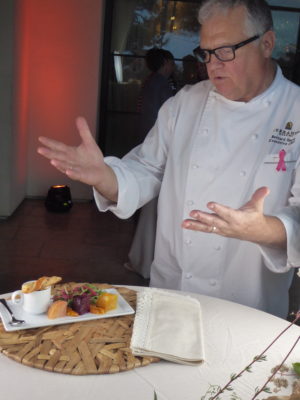 Executive Chef Bernard Ibarra explain an appetizer that is about to be served. Photo by Richard Foss.

The Palos Verdes Pastoral celebrated the Conservancy’s history and achievements on October 27th with a gala event at Terranea Resort. The two organizations have a long history: when the resort was being designed, Conservancy Executive Director Adrienne Mohan consulted with them about using native plants in their landscaping. The kitchen there has also taken the lead in using produce grown on the Peninsula, and Executive Chef Bernard Ibarra has drawn inspiration from ingredients and recipes created by indigenous Tongva people. These showed up throughout the meal, particularly memorable in local mussels accented with prickly pear salsa. Another dish may have done the environment more favors, since Chef Ibarra turned invasive fennel plants into a rich, creamy soup along with nasturtium oil and local bee pollen. Palos Verdes residents would have to become great enthusiasts of fennel soup to make a dent in the fast-growing plant’s spread, but any progress along that line is a good start. 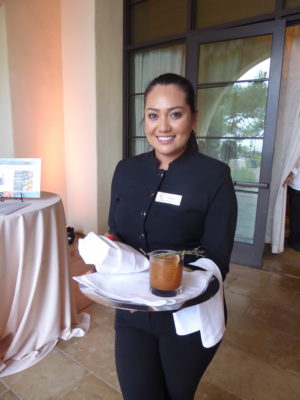 The evening began with cocktails, wine, and appetizers on the broad terrace with a view of Catalina. The wines included Flying Triangle Syrah, made from grapes grown in Rolling Hills, and Seka Hills Tuluk’a, a red blend made in Northern California by Native Americans on tribal land. Those who preferred cocktails enjoyed the signature “Gnatcatcher in the Rye,” named in honor of the endangered California gnatcatcher that nests on the Peninsula. (There wasn’t any actual rye in the cocktail, which was based on bourbon from El Segundo’s R6 Distillery, but the pun had to be made. The other ingredients were apple cider, blood orange juice, and Terranea’s spiced syrup, with a garnish of local figs and a sprig of thyme.)

Besides the drinks and the aforementioned mussels, starters included figs wrapped with cured ham, anchovies with onion marmalade on toast, a fruit and chicken skewer with peach and pear compote, and prawn rissole infused with lemonade berry, a native plant renowned for its tart, citrusy flavor. Guests enjoyed all of these while listening to live music by guitarist Paul Ellis, who showed delicate virtuosity with traditional Spanish and Classical pieces. 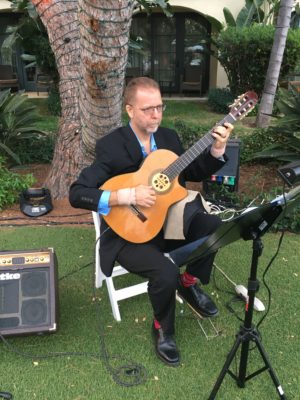 Music during the evening was provided by guitarist Paul Ellis. Photo by Richard Foss.

While the appetizers, beverages, and scenery would have been a draw by themselves, one of the great attractions here was the chance to talk informally with others who are passionate about preserving the unique environment of the Peninsula. Having the event in this open-air environment helped keep the focus on the goals of the organization in a way that no conference room or restaurant situation could. A light, fresh breeze from the ocean moderated temperatures that had been unseasonably high, and in the cool of the evening heat lamps kept things comfortable.

When it came time for dinner, everyone was seated at tables ornamented with aromatic branches of local foliage, sprigs of herbs, ornamented flatbreads, and the occasional whole red pepper or other vegetable. (Some of the peppers went home in pockets and purses, presumably on the assumption that they shouldn’t be wasted.) After brief presentations by Terranea Resort President Terri Haack and Land Conservancy Director Adrienne Mohan, servers arrived bearing the first course: wild fennel soup and a roasted beet salad with watermelon radish, prickly pear, tangerines, and local olive tapenade topped with Meyer lemon-infused sea salt harvested from Terranea’s shoreline. The pairing of the silky soup with a salad that had a crisp, slightly tart flavor thanks to the beets and citrus was superb, and the use of the prickly pear and other local ingredients emphasized the connection to the land. 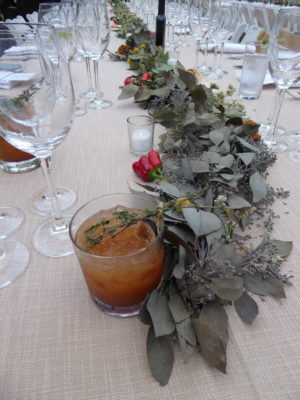 The table decor was made with local foliage. Photo by Richard Foss.

This was followed by the main course, tenderloin of beef crusted with saltbush seeds, seared, then slow cooked in bone broth reduction. There was symbolism as well as flavor here, since native people who used the saltbush were driven from these lands so cattle could roam there, so pairing beef with saltbush represented both. It worked both conceptually and in terms of flavor, and was artfully paired with scallops poached with local kelp in lobster sauce and a potato galette with root vegetables and farro. The wines offered at this course included Chardonnay and Pinot Noir from Villa Oneiro, the winery located near the top of the Palos Verdes Peninsula. These were well received, and a reminder that this was a productive agricultural area long before the first luxury homes were imagined. 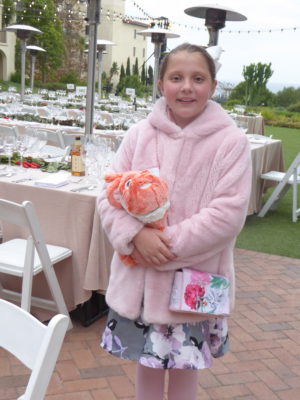 The Land Conservancy’s aim is to save natural spaces for future generations. They hope that Kaylin Gregerson, who is ten years old and attended her third PV Pastoral, will inherit the same love of nature. Photo by Richard Foss.

To finish there was an elaborately layered desert: an apple crumble topped by a goat cheese panna cotta, sage honey gelato, and edible lavender flowers. It was interesting to see how people approached this: some dissected it to sample each element, while others enjoyed the way that the slightly different blends of taste and texture infused each bite.

The evening finished as it began, with people who had met by chance at the long tables chatting animatedly before departing. As conversations do, these wandered from musings about the food and the beauty of the evening to both everyday and lofty concerns. It had been a lively and successful evening for 240 attendees, who were ready and reenergized to assist with not merely preserving the wild spaces of the Peninsula, but extending them for future generations.