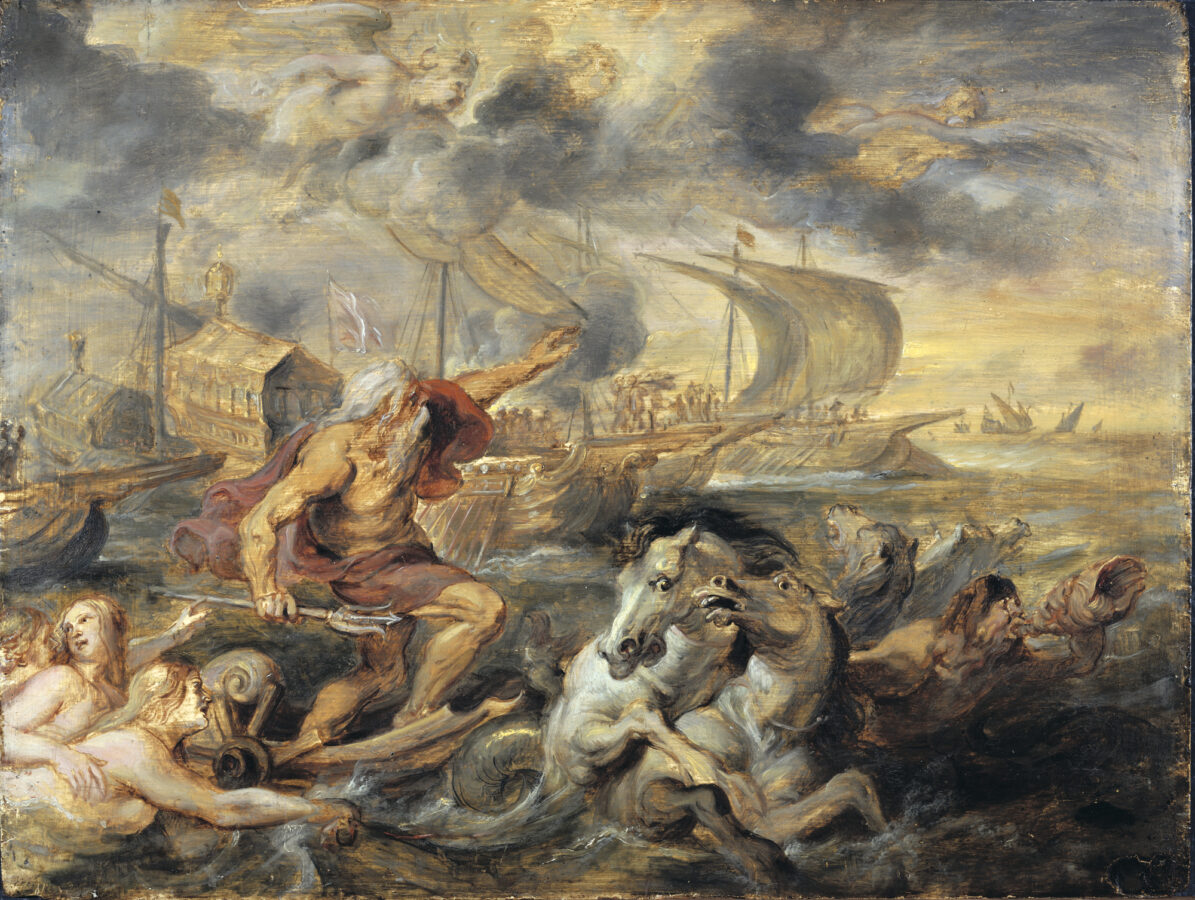 “The Voyage of the Cardinal-Infante Ferdinand of Spain from Barcelona to Genoa in April 1633, with Neptune Calming the Tempest (“Quos Ego”)” (1635), by Peter Paul Rubens. Oil on panel. Harvard Art Museums/Fogg Museum. Image: © President and Fellows of Harvard College, 1942

The Marvel Superheroes of yesteryear were the gods and goddesses of classical mythology, and it took an “action painter” (no, not Jackson Pollock) to capture them in the heat of the moment, whether that moment be wrestling lions, spearing wild boars, riding into battle, or abducting young maidens. The artist I’m referring to is of course Peter Paul Rubens (1577-1640), a contender for the Wagner of painters as even many of his smaller works are “monumental.”

The curators of “Rubens: Picturing Antiquity” (Anne T. Woollett, Davide Gasparotto, and Jeffrey Spier) are quick to emphasize that for Rubens “the connections between ancient and Baroque sensibilities were vibrant and alive with possibility. Rubens’s passionate visualization of the ancient past served as one of the defining creative forces of the seventeenth century.” 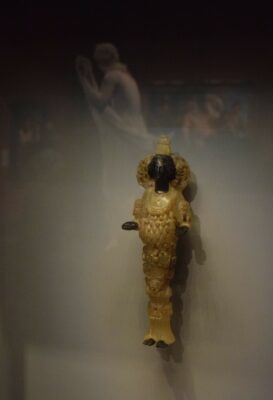 Getty director Timothy Potts also points out that the current exhibition, on view through Jan. 24 at the Getty Villa in Malibu, looks “into themes found throughout Rubens’s career to reveal the exceptional range of intellectual pursuits that stemmed from his profound knowledge and enduring curiosity of the classical past.”

Rubens was one of J. Paul Getty’s favorite artists, hands down, and this is at least the fourth exhibition devoted to Rubens that I’ve seen in recent years, the others being “Spectacular Rubens: The ‘Triumph of the Eucharist,’” “Looking East: Rubens’s Encounter with Asia,” and “Rubens & Brueghel: A Working Friendship.” Each one tackled a different aspect of the painter’s art or interest.

We might want to start by asking how a lad from Antwerp became immersed in Greek and Roman art. Well, being that Rubens was in Rome in 1601-02 and again from 1606-08, he had the opportunity—and took full advantage of it—to see and sketch sculptures and statues, and not simply the ones on everybody’s bucket list.

“Once in Italy,” writes Anne T. Woollett, “Rubens explored unusual themes of chaos and turbulence.” A good example of this might be “The Fall of Phaeton” (c.1604-05), which depicts a Challenger-like space disaster, only this time with horses and a hapless charioteer. 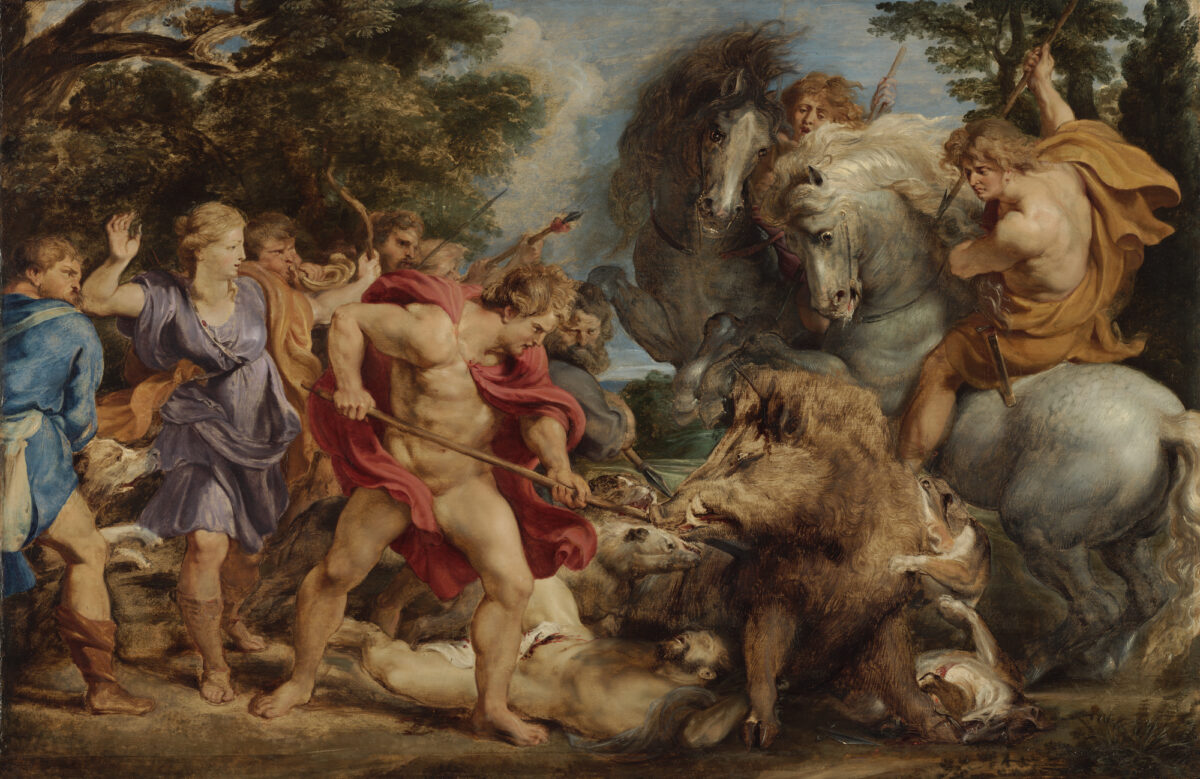 Rubens zeroed in on the defining moment (or, with a nod to Henri Cartier-Bresson, the decisive moment), but also, as Woollett notes, “Like (Hendrick) Goltzius before him, Rubens found the muscularity of antique sculpted physiques compelling.” This is evident in “The Calydonian Boar Hunt” (c.1611-12), the image that’s been used to promote the show. “Sheets of anatomical studies, executed with graphic dynamism, attest to the young artist’s desire to master the mechanics of motion.” 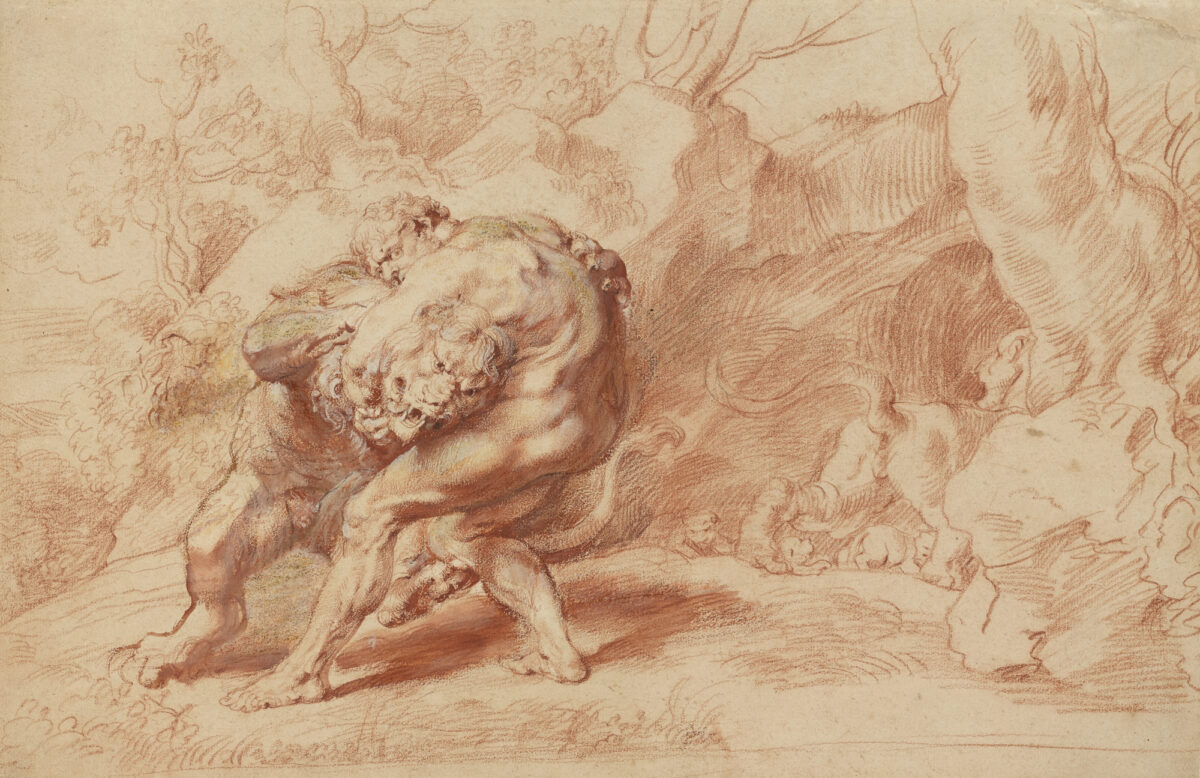 Two more examples, both of them in the exhibition: “Hercules Strangling the Nemean Lion” (c.1620) and “Hercules and Cerberus” (1636-37). These works capture the clash and dynamics of opposing forces, action suspended as if in mid-stride.

One of the key works that inspired Rubens was the first century BC marble sculptural group known as “Laocoön,” in which the priest Laocoön and his sons have become entangled with anaconda-sized snakes, to their detriment. “The taut, muscular forms and anguished countenances” of the victims “represented ideal heroic exertion and suffering for Rubens.”

I should mention that it wasn’t all just grappling and wrestling: Rubens also depicted Diana and her nymphs on several occasions, and also various drunken and lustful satyrs. In some instances, and this is what makes “Rubens: Picturing Antiquity” unique, the original source or inspiration is on display with Rubens’s version of it, for example “Silenus with a Wineskin,” a marble statue from the third century AD, and Rubens’s drawing of it, “Drunken Silenus” (c.1608). The real coup is having both “The Calydonian Boar Hunt” (see above) and the marble Sarcophagus Panel with the Calydonian Boar Hunt from AD 280-90.

While it’s one thing to sit on a stool and sketch a sculptural work, it’s another to avoid “the smell of stone” while drawing it. Those who copied statues tended to focus on proportion, but Rubens focused more on the expressive qualities or, in other words, “the information statues could offer in terms of pose, composition, anatomy, and expression.” His renditions on paper never look wooden (or smell of stone!), and this is why. What Geppetto did with Pinocchio, Rubens did with the Laocoön—he brought it to life.

Davide Gasparotto writes in the catalogue that “Rubens’s ‘keen and unerring judgment’ about antiquity was almost proverbial, and was aided by an extraordinary visual memory and an enviable firsthand knowledge of classical sources,” but it wasn’t only large sculptural works that impressed and inspired him, but also ancient coins, engraved gems, and cameos. 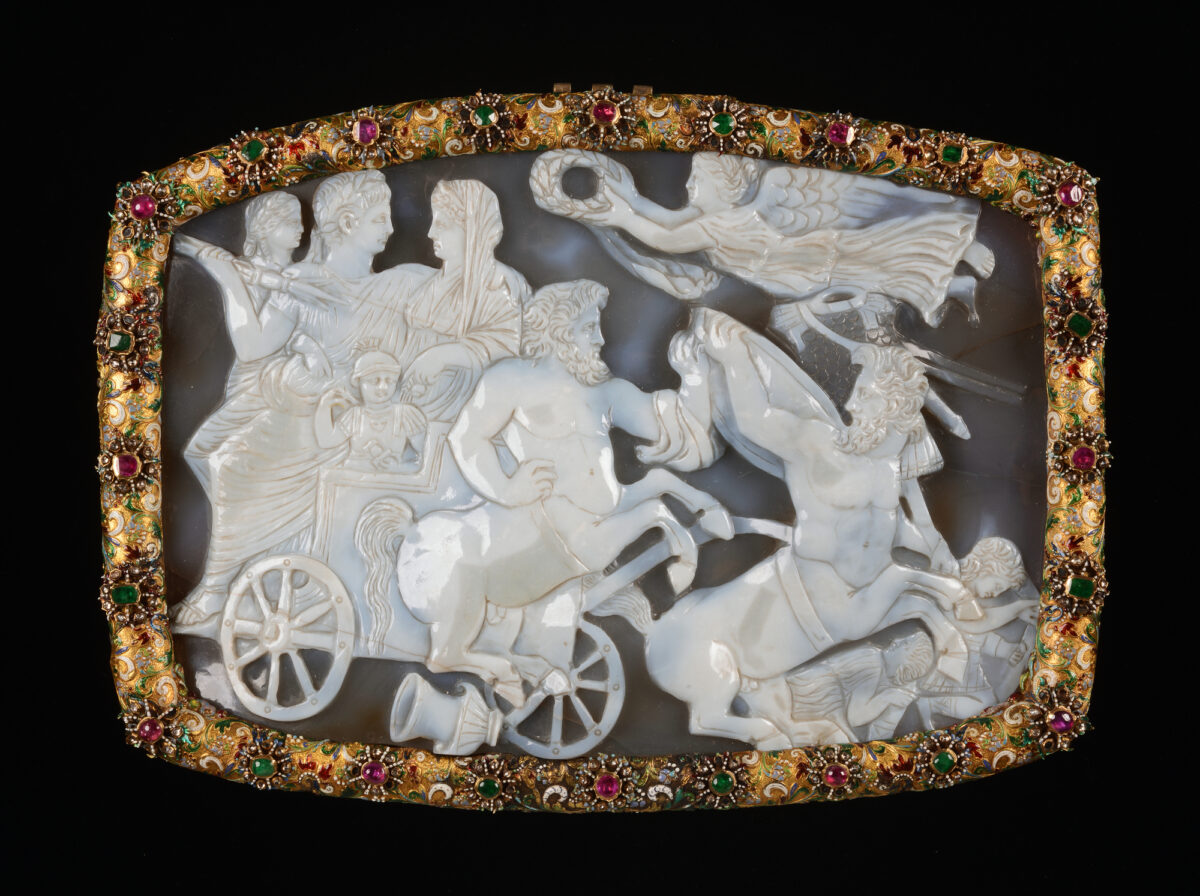 People of means, mostly in Italy, had vast collections of these objects, and Rubens not only had access to many of them, he himself amassed an impressive collection as well. Although he eventually sold off most of its contents, he held onto the more meaningful pieces. Which is a roundabout way of saying that “Rubens: Picturing Antiquity” not only features drawings and paintings but a nice selection of gems, coins, and other ornaments. As another proof of his deep interest in this subject, Rubens and Nicolas-Claude Fabri de Peiresc planned to create and publish an illustrated volume devoted to the masterpieces of ancient glyptic art.

When you think about it, pomp and circumstance and ticker-tape parades are like big gems writ large and colorful. And thus, as Woollett states, “Perhaps more than any other occasion represented in classical sources, the triumphal procession fascinated Rubens.” There are examples of this compelling interest on exhibit as well, which is also reminiscent of the book and exhibition, “Spectacular Rubens: The ‘Triumph of the Eucharist,’” from a few years back. 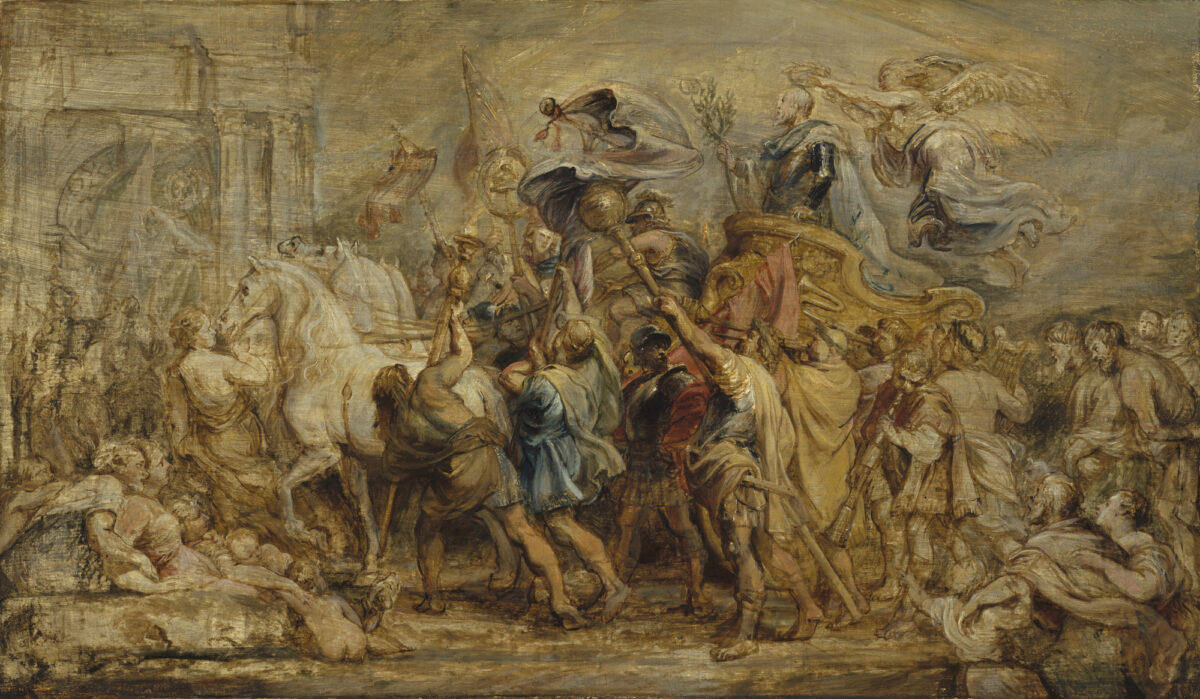 “The Triumph of Henry IV” (about 1630), by Peter Paul Rubens. Oil on panel. Lent by The Metropolitan Museum of Art. Image: metmuseum.org

Looking through the various sources, the bibliography and so on, it’s somewhat amusing to see the different ways that Rubens is referred to elsewhere, in other languages: Pierre-Paul Rubens, Petrus Paulus Rubens, Pietro Paolo Rubens, and Petri Pauli Rubenii. But the visual images are a universal language that doesn’t need translating and that everyone, everywhere, can understand, admire, and enjoy.

Rubens: Picturing Antiquity is on view through Jan. 24 at the Getty Villa, 17985 Pacific Coast Highway in Pacific Palisades. Admission to the Getty Villa is always free, but reservations required for admission. Parking, $20. COVID mandates in place. (310) 440-7300 or visit getty.edu/visit. ER