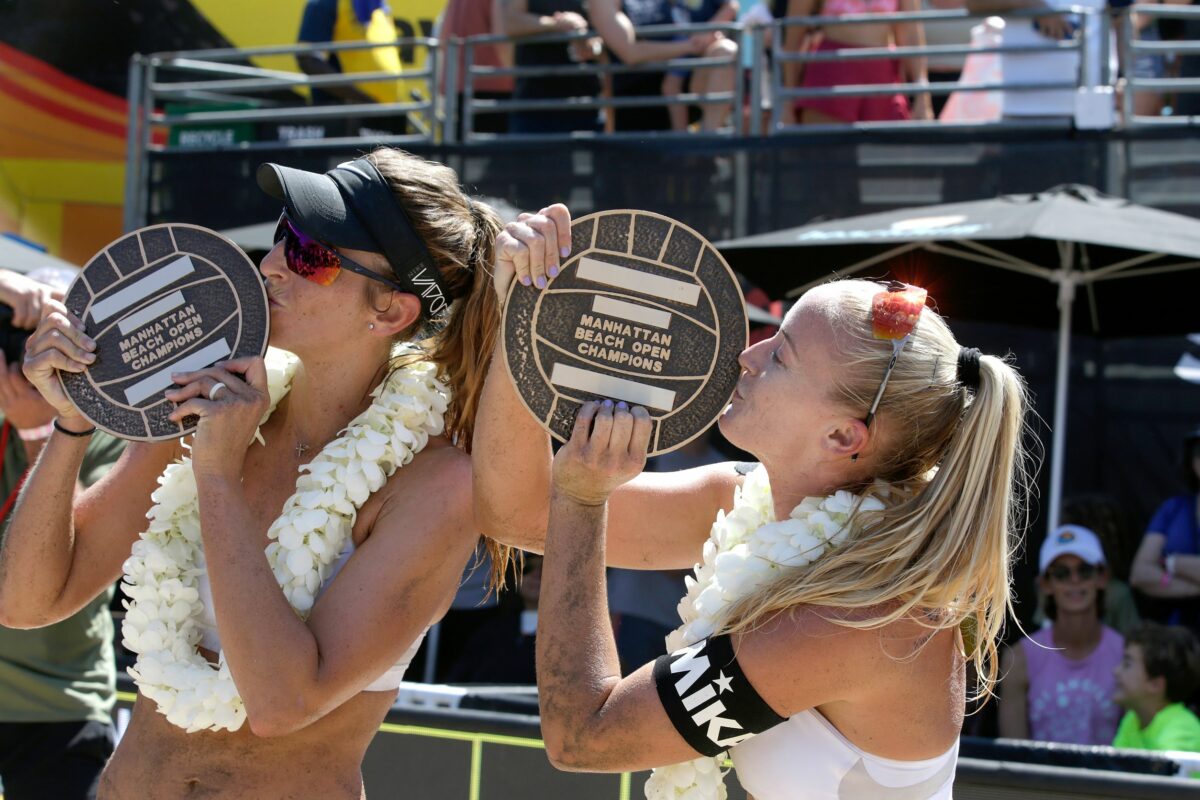 The City of Champions just gained another one.

Now one more has been added to the city’s ever-growing list of present and future Sports Hall of Famers: April Ross.

The world’s best women’s beach volleyball team has always had half its roots in Manhattan Beach, with Alix Klineman coming up through the city’s elementary school system, and graduating from Mira Costa High School in 2007 as arguably the most accomplished athlete in the school’s history.

But until last month Manhattan had to share the A-Team’s hometown hero honors with Newport Beach, where Ross grew up, and developed her game before moving on to USC and the pro volleyball tour.

But now Ross is an MB resident too.

“I moved here last month,” Ross confirmed Saturday when asked about the rumored change of residence. “I live in the tree section.”

And Ross confessed it has been a summer of major life changes in another way for her: she is now engaged to a young man named Josh Riley.

“We plan to be married next summer on the beach,” she said. “I think it will be very romantic.”

And Ross, 40, may also be looking at a career change as she gradually starts to transition from playing to coaching.

Ross and Klineman were the defending champions at the AVP Manhattan Beach Open held this past weekend, and were honored with a Manhattan Beach Open Walk of Fame plaque installed during the traditional ceremony on the Manhattan pier Thursday afternoon. But they sat out this year’s tournament to heal their injuries and get some much-needed time off from their yearlong victory lap, after winning the Gold Medal at the Olympics last summer.

Despite their decision not to play the MB Open, Ross was a very visible presence all weekend long. She coached the men’s team of Kyle Friend and Tim Brewster, who lost in the early rounds.

And that’s not the only coaching she’s getting involved with. In October she and AVP men’s star Phil Dalhausser – another Olympic Gold Medalist — will host a two-week clinic in Santa Monica for both teens and adults. (PhilAndApril.com.)

With her cultural profile raised to a new level of awareness thanks to the Olympic Gold Medal the thousands of volleyball fans who packed the MB Open courts Friday, Saturday and Sunday were enjoying her presence as the face of the sport.

She also served as a roving ambassador for products like KT Tape, the therapeutic kinesiology tape.

While KT workers handed out free tape samples – small samples of everything from bug spray to sunscreen to premium water have long been a fun part of the MB Open scene — Ross autographed everything put in front of her by a steady stream of fans at the KT Tape booth.

The most frequent request, from kids and adults alike: Can I take a picture with you?

But there were variations, like the little blond kid who asked her to sign his yellow water bottle, and the big girl who asked Ross to sign her white visor.

“I’ll never wear it again,” she said as she proudly showed it off to friends. “It’s going right up on my wall.”

The 6-foot-1 Ross even fist bumped two big football-player types who approached her with toothy smiles and outstretched hands.

“We’re both huge fans,” one of the guys said. “Saw you win the Olympics. Congrats.”

A few people asked to touch the Olympic gold medal around her neck. She even showed one fan the hand-knitted pouch a friend made for her to keep the medal protected. 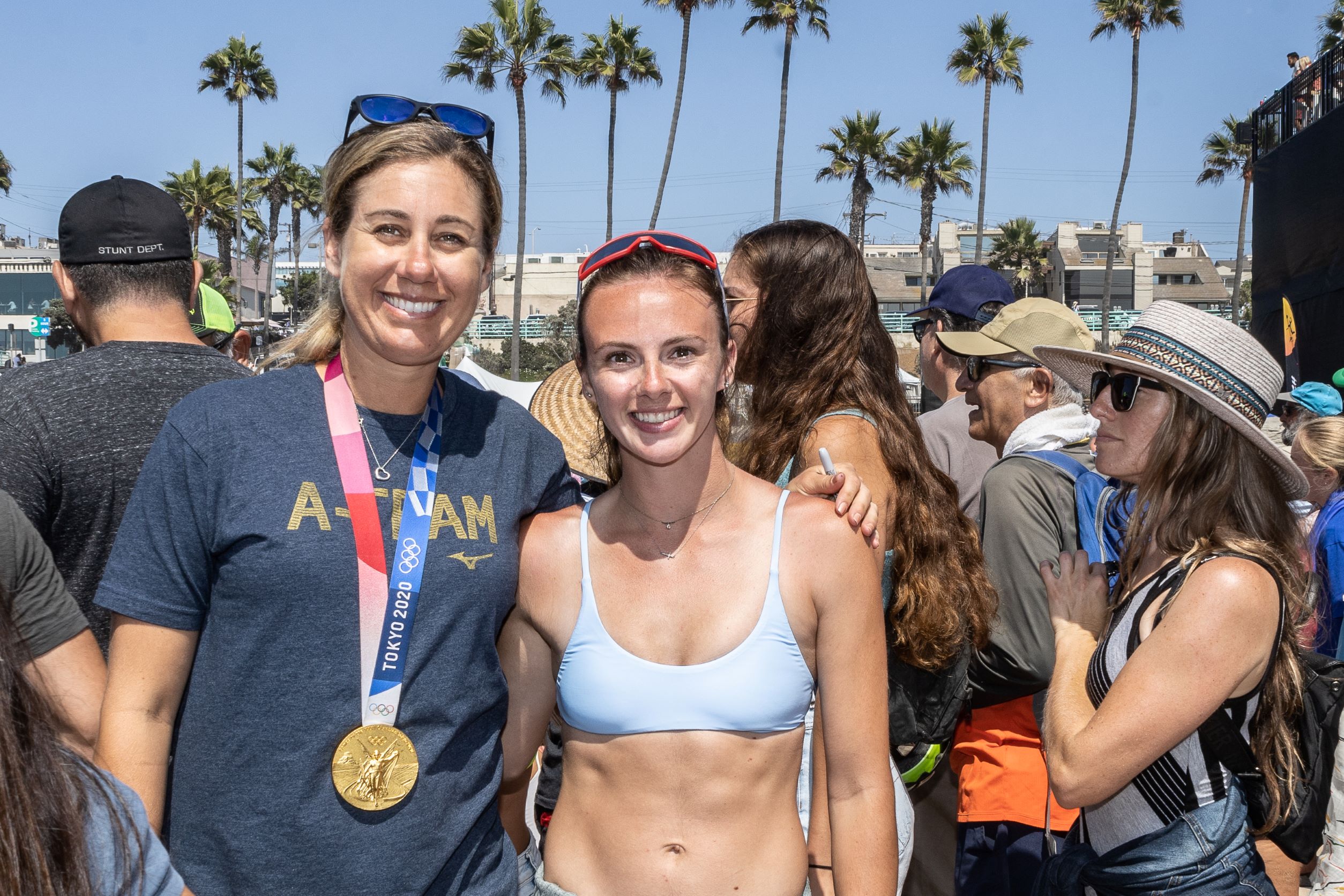 Those were all brief encounters. But then came Jenna Quillen, a 26-year-old from Cleveland, Ohio, who said it was a dream come true to meet one of her idols. The other is Kerri Walsh, who was Ross’s partner from 2013-2017.

“That’s when I started getting into volleyball,” Quillen said. “They were both my heroes and inspired me to play competitive volleyball. Of course, we don’t have as many opportunities to work on our game in Cleveland as kids here do.”

She said she has tried to qualify for AVP tournaments but so far has been unsuccessful.

“That’s my dream,” she said. “Just to make the main draw once in my life.”

Ross said she once shared that dream.

“I totally get it,” she said. “That was my goal when I started. I failed the first five times I tried.”

Quillen was amazed to hear that and took heart from it.

“April is an inspiration,” she said. “Her persistence is amazing. And her sportsmanship is off the charts. I think she’s the best sportsman out there.”

“I mean, how often do you get to meet April Ross?” she said as she walked away. “I’ll never forget that she took the time to talk to me like a fellow competitor, not just as a fan. It was just such an honor to meet her.”

Before Ross could greet another well-wisher, she was asked if the A-Team plans to compete in the 2024 Paris Olympics.

“TBD,” she said, shorthand for To Be Determined. “But we would like to give it a shot.” 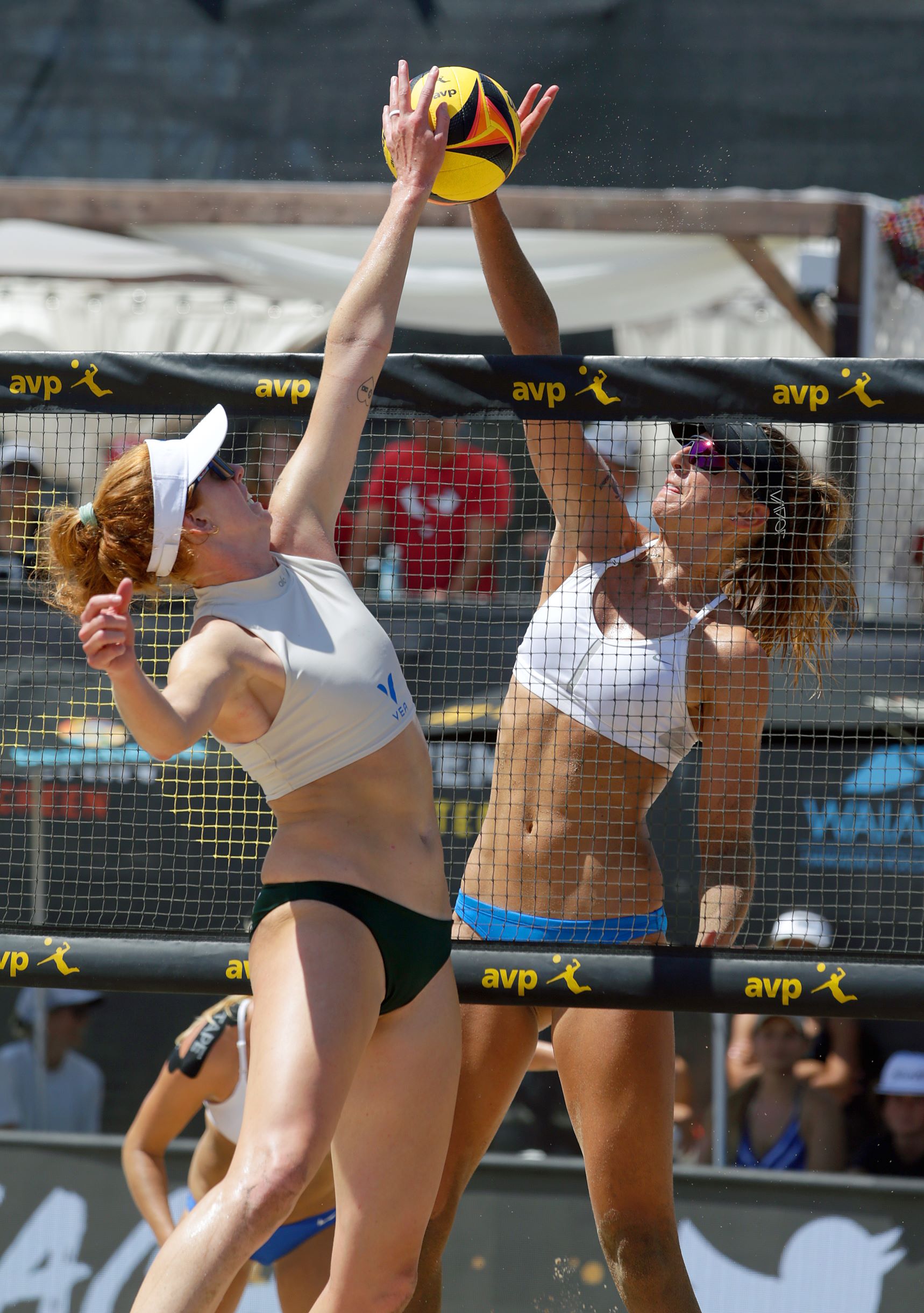 Kelly Cheng and Kelley Kolinske contest the ball at the net, in the tightly contested finals. Photo by Ray Vidal

While the A-Team was off the volleyball stage, the actual competition went on. The “Wimbledon of Beach Volleyball,” was won by two Manhattan Beach newcomer residents  Sarah Hughes, and Kelly Kolinski in the Women’s Division, and Tri Bourne and Trevor Crabb in the Men’s Division. 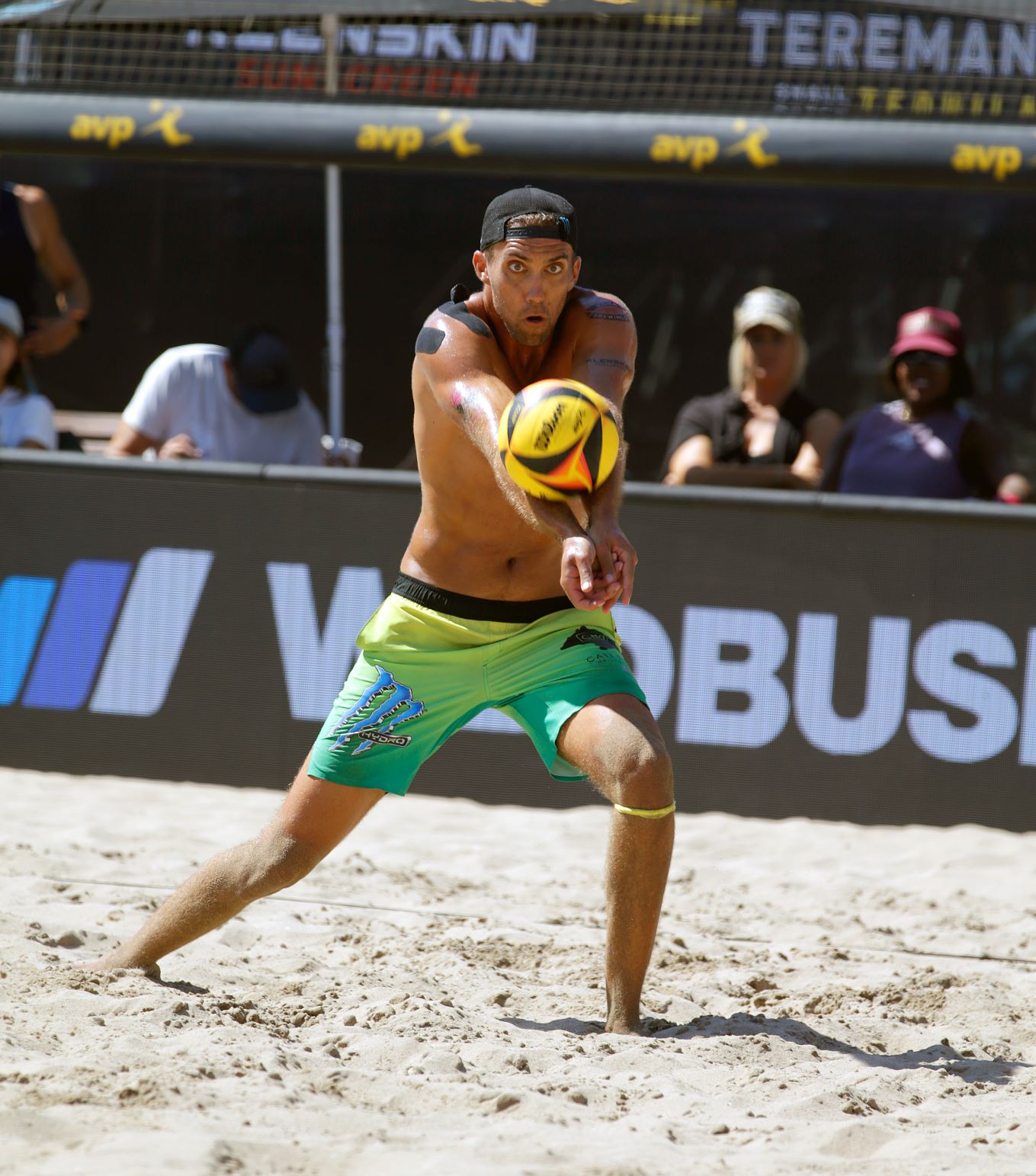 Trevor Crabb handles a hit in the finals. Photo by Ray Vidal

The women stole the show. While Bourne and Crabb beat Theo Brunner and Chaim Schalk in straight sets, and led from the first jump-serve to the last monster block, Hughes and Kolinski won in a white-knuckle thriller.

While it looked bleak for Kolinski and Hughes, Kolinski said they never even thought they might lose. “We knew they might get tight as they neared the victory, so we just took it point by point and told ourselves to keep fighting.”

And fight they did: Kolinski had a monster block to get to 13-11, Hughes soared above the net for a cross-court kill shot to crawl within 13-12, and Kolinski served a frozen rope that caught the top of the net and dribbled down into the sand before Cheng or Flint could do anything with it.

With the crowd standing and screaming for the third-seeded underdogs to beat the second-seeded team, Kolinski stuffed Chang at the net to earn a match point. Tension in the stadium was at a category 5 and rising. Then Flint leapt for a cross-court kill that landed just wide of the left sideline.

Suddenly, improbably, Hughes and Kolinski had ripped off a 5-0 run to steal a match that they had been on the verge of losing.

Hughes leaped into Kolinski’s arms, coaches, trainers, friends and family swarmed onto the court to create a huge dog pile with both players on the bottom, and for a few minutes bedlam reigned.

Finally, the two ecstatic winners had calmed down enough to tell the assembled media how much it all meant to them.

“Getting your name on the pier, stamped on there forever, is pretty special,” Kolinski said. “And to be doing it where we both live, in our hometown, with all our families and friends here was awesome.”

Manhattan Beach: once again the City of Champions!