Matt Wuerker, an editorial cartoonist from Palos Verdes, was awarded a Pulitzer Prize on Monday for what the award committee described as “his consistently fresh, funny cartoons, especially memorable for lampooning the partisan conflict that engulfed Washington.”

Wuerker works for Politico, an online-only political journalism organization based in Washington D.C., where he has drawn cartoons since the site’s launch in 2007. This year marked the first time for-profit, online-only publications have won journalism’s most prestigious award. Huffington Post received this year’s Pulitizer for national reporting.

Wuerker said he was drawing a cartoon at the Politico offices when the newsroom erupted in cheers Monday afternoon.

“I was not expecting it, I really wasn’t,” Wuerker said in a brief interview Tuesday. “It’s crazy validation…I never even entered the Pulitzers up until the time I started working for Politico, and even then it seemed like an utter crapshoot. Never in my wildest dreams.”

Politico editor-in-chief John F. Harris, in an article on the site Monday, praised Wuerker not only for garnering the organization’s first Pulitzer but for helping establish its identity.

“I don’t think there is any better example of nice guys finishing first in our newsroom than this award for Matt,” Harris said. “He’s just, as everybody knows, one of the best, nicest, most dedicated, conscientious [people] in the newsroom, and we really, really appreciate what you have done for us both in winning this award but far more in helping us build a publication.”

More than 200 staffers threw an impromptu celebration. Wuerker, 55, expressed gratitude for the publication, which has given him his first home as an editorial cartoonist after decades cobbling together a living through freelance work and syndication.

“The whole thing was very improbable – at age 50, to find a home like this, especially in a time when the newspaper industry seemed to be in such dire shape, to find myself working for a platform that was going,” Wuerker said. “When everything else seemed to be sinking around us, Politico was really, truly running against the tide. It was really my great and good fortune to hop upon that particular vessel in the storm…I don’t think what they were thinking is ‘Oh we need a staff cartoonist so we can go win a Pulitzer.’ It wasn’t part of the flow chart for the success of Politico.”

The organization was jubilant on Monday afternoon that the flow chart had, in fact, worked out this way.

“Word came out and people started to applaud and I looked up and my [executive] editor, Jim VandeHei, sat down at my desk and shook my hand,” Wuerker said. “It’s such a strange, fabulous wave of emotion you have to ride out, sort of disbelief mixed with a lot of pure happiness and a hideous swelling of your ego. It was great. I had a moment where I hugged some other editors that were right by me and realized I was going to have to hug the entire newsroom, so instead of hugging the entire newsroom I channeled an odd combination of Stephen Colbert and Sally Fields and ran through the newsroom high-fiving everybody. It was great. It was like a scene out of a really corny movie. It was really a blast.” 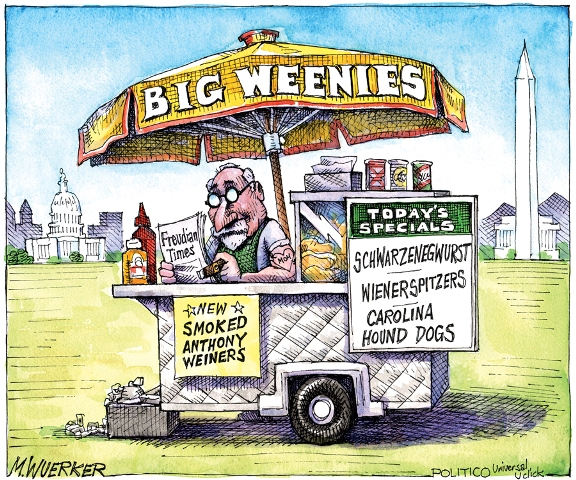 This 2011 cartoon was among the works that earned Wuerker a Pulitzer prize.

Wuerker’s political cartoons first appeared when he was a student at Malaga Cove Intermediate School, in the school’s weekly paper.

“It was the same time Watergate was going on and Vietnam was reaching its height and I was just this callow, stupid 7th grader trying to make political commentary,” Wuerker said in a 2006 interview.

He continued drawing at Palos Verdes High for the school paper, the Trident, and began receiving more and more attention for his skill at it. “It was great,” Wuerker recalled. “For basically this shy and introverted kid, it was a window into doing something public.”

While still in high school, Wuerker won a student competition among local students that was judged by Paul Conrad, the famed editorial cartoonist who drew for the Los Angeles Times and lived in Palos Verdes until his passing in 2010. The iconoclastic Conrad was one of the most renowned editorial cartoonists in the country, so much so that his sharply critical take on the Nixon Administration earned him a spot on Nixon’s infamous “enemies list” – something Conrad later said he valued more than the three Pulitzers he was awarded during his four-decade career.

“As a teenager reading the paper, I was like, ‘Wow, here’s a guy who sits around and draws pictures who has gotten the attention of the president of United States.’ Not only that, but he managed to get Nixon to hate him,” Wuerker said. “I thought that was pretty impressive.”

Wuerker’s parents Ralph and Scotty were friends of Conrad, who became a mentor of sorts for Wuerker. “His best advice to me was, ‘It’s more about read, read, read than about draw, draw, draw,’” Wuerker said.

Wuerker could not have chosen a more embattled profession. At one time, nearly every newspaper in America employed an editorial cartoonist, and their work often appeared on page one. As Wuerker noted at a talk he gave at St. Luke’s Presbyterian Church in Rolling Hills in 2006, the 200 or so editorial cartoonists still working 20 years earlier had dwindled to about 30 to 40 fulltime cartoonists.

“I am,” Wuerker said, “a living anachronism.”

What is even rarer about Wuerker is his style, a type of drawing knowing as “cross-hatching.” “Crosshatching” is an extremely labor intensive way of drawing that is a throwback to editorial cartooning in the 1800s and is characterized by the use of crossing sets of parallel lines to mark and shade a cartoon. Even Conrad – a throwback and iconoclast if ever there was one – was amazed that Wuerker still employed the style.

“He does more drawing per square inch than any guy I’ve ever known,” Conrad said in a 2006 interview. “He draws, draws, draws. And it works. His cartoons are beautiful things. They are works of art, as far as I’m concerned.”

Wuerker, in light of the changes that have taken place since he started at Politico, said he’d like to add to his comments from 2006.

“I would like to amend that – that I am a living anachronism,” he said. “I showed that an anachronism can adapt, too. There is a strange little irony here – even though I am basically a 19th century style cartoonist, drawing in pen and ink and watercolor on paper – maybe I said this back in 2006, but I believe it even more now – all this stuff actually adapts pretty well to the digital age, and in some ways is perfectly suited to the world of online news, blogs, Facebook, and Twitter. You take an old fashioned cartoon and scan it and you put it on an iPad or an iPhone and its colors are even more brilliant and the ability to share a cartoon is faster than the olden days. You know, it works just fine.”

Wuerker also credited the small independent weeklies including Easy Reader, and specifically editor Kevin Cody, who helped launch his career three decades ago, for keeping alive his hope that he might actually be able to make an unlikely living doing what he loves.

“I am very grateful along the way for the newspaper publishers, the people who have magazines and newspapers, that employ oddballs like cartoonists,” he said. “That is what kept me going through the 25 years that preceded Politico. Willamatte Weekly after college, the Easy Reader – Kevin was giving me color cover illustrations that kept a freelancer like me drawing. I would have had to go get honest work if it wasn’t for people like Kevin. I mean that.” 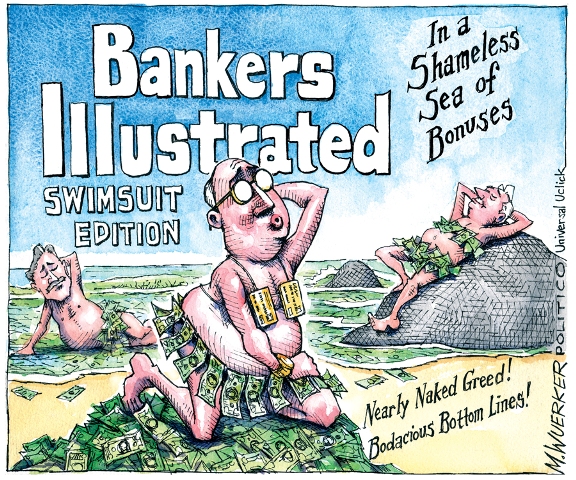 This 2011 cartoon was among the works that earned Wuerker a Pulitzer prize.