Polly’s is still Polly’s on the Pier [restaurant review] 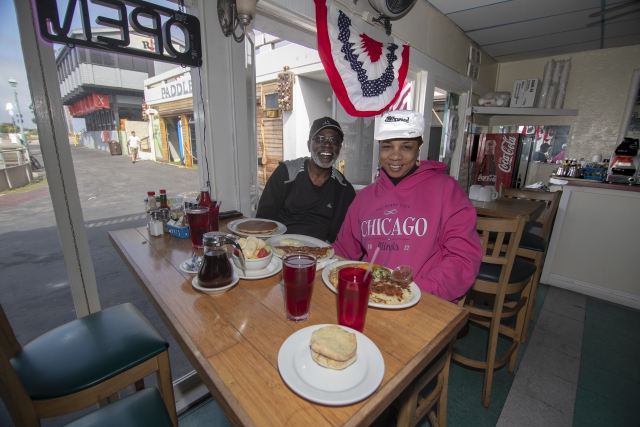 Valerie and Mike Davis know exactly what to order on Polly’s on the Pier. Photo (CivicCouch.com) 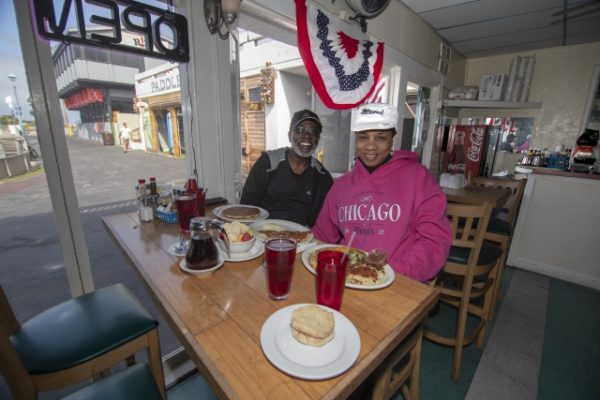 Valerie and Mike Davis know exactly what to order on Polly’s on the Pier. Photo (CivicCouch.com)

Moving from one location to another is a challenge for any business. It helps to have an established clientele and an unusual product, or at least a specialty or two that nobody else in the neighborhood offers. Restaurants actually have some advantages over other businesses, because the good ones develop a bond with repeat customers that would be unlikely at a mattress store, laundromat, or furniture refinisher.

Even so, the move can be problematic when the old location had a thematic fit with the environment. A perfect example of this is Polly’s on the Pier in Redondo, which has retained its name after being forced to move when the condemned fishing pier. The new space is just north of the old one, and raised the question of what it should be called. They had several options, none perfect. Polly’s on the Boardwalk doesn’t have the same pleasing alliteration, and also breaks the sense of continuity with the old location. They could change the name to Polly’s on the Boardwalk But We Hope To Move Back Onto The Pier When They Rebuild It, which would have the virtue of accuracy but would require a very large sign.

Polly’s decided to just keep the name, which was probably the most sensible thing to do. They then faced a choice of whether to change their business model, since they were a breakfast and lunch place that moved into an area noted for nightlife. Many owners would have decided that it was time to start serving dinner and apply for a beer and wine, but again they decided not to change. The owners of Polly’s evidently have a strong belief in their business model.

I heard predictions of doom from many locals, including the owners of nearby establishments. A cornerstone of Polly’s business had been the people who used that fishing pier, and without that draw the place would wither away. The move was in early January.

Fast forward to now, and Polly’s on the Pier seems to be doing just fine. The corner between the stand-up paddleboard rental shop and Naja’s doesn’t have a view of the surf, but it also lacks the disconcerting shudder every time a good-sized wave hit the rickety old pier. The space is a bit smaller, the menu is the same, and so are at least some of the staff. My server recognized me from a visit that was at least a year ago.

I looked at the menu and found there have been a few minor changes, all additions to the Mexican items on the menu. In the spirit of scientific inquiry I ordered a breakfast burrito, while my wife went with the hotcakes, egg, and bacon breakfast. Both were standard items competently executed, which was exactly the feel of the old Polly’s. The salsa with the burrito had a decent kick, the hash browns on the side had some crispness, as I had requested, and my wife’s pancakes were nice and fluffy. The only thing that was different from the experience at the old place was that the coffee was better and they accepted a credit card for payment.

The next time I stopped by, I asked my server what she thought was the best item on the menu, and she unhesitatingly recommended the roast beef melt. I hadn’t remembered this as a featured item and asked why, and she said that they had started roasting their own beef and it was better now. I have been eating crab melts at Polly’s for years and regard that as their standout item, but decided to give the beef melt a try. The beef was indeed better than the standard packaged stuff and worthwhile for the carnivore crowd. I still prefer the crab melt for its rich flavor, but would certainly have this again.

On another visit I tried a Polish sausage, spinach, mushroom, and cheese omelet, despite the fact that I knew my wife might make fun of me for ordering it. It’s exactly the kind of thing I often make for breakfast at home, so why was I ordering it when dining out? By that point I was thinking of Polly’s as comfort food and not even trying to find novel or unusual items. I asked for grilled onions in it because that’s what we make at home, and the effect was just as I wanted.

I’m sure if I were to order the whole menu, from beginning to end, there would be nothing remarkable and nothing bad. They make simple food well, serve it with a smile, and don’t charge much. The place has character, and you can get a decent American breakfast in an area without many other options along that line. If that sounds good to you, Polly’s is where you should go. The fact that their move went so well suggests that for a lot of Redondo denizens it’s a winning strategy.