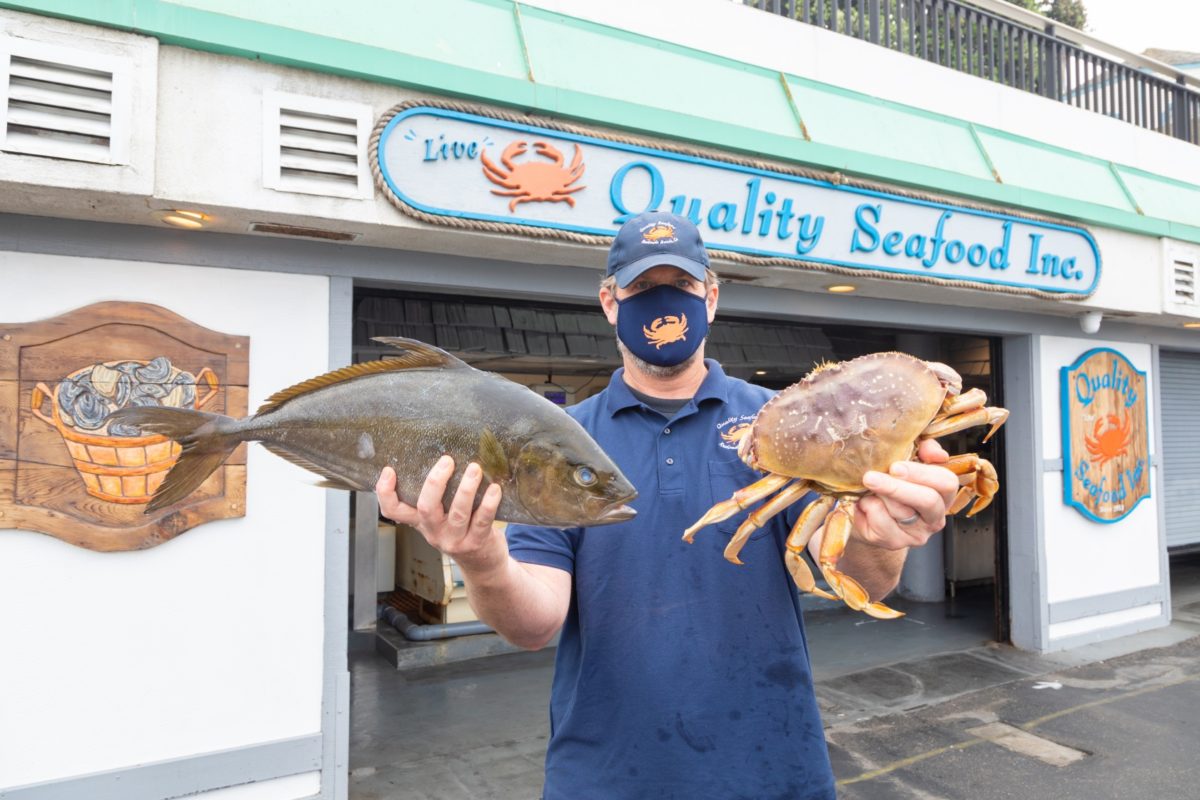 My grandmother grew up by the Chesapeake Bay in Maryland, and like most people from that area was particular about seafood. Before ordering crab cakes at a restaurant she would pepper the server with questions – was it made with leg meat, claw, or backfin lump, and where was the crab from? Servers usually had to go back to the kitchen to find out, and sometimes the people back there didn’t know either.

This was embarrassing to a child who didn’t want to be associated with the picky old lady with all the questions, but in retrospect foreshadowed my own career. I’m polite about it (and she often wasn’t), but I like to know about the quality of seafood before committing to ordering it.

Which fits nicely with the name of the place I’m reviewing this week, where the workers certainly could have answered my grandmother’s most probing questions. Quality Seafood is owned and operated by people who really know their fish, and who still buy from local fishermen. Unlike some places that have a few pieces of fish on display for show, this is as much a fish market as an eatery. Many people who have strolled by the tanks full of live seafood are surprised when they step inside and see the vast array of even more seafood on ice. 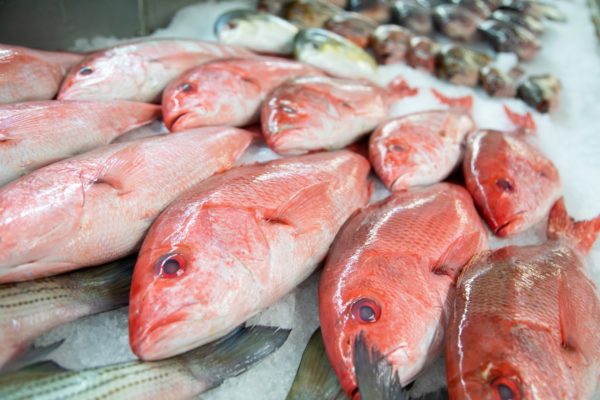 Red Snapper on ice, but not frozen at Quality Seafood. Photo by JP Cordero

There are downsides to the sprawling layout here, and it helps to understand the system and figure out what you want in advance. The ideal tactic is to take at least three friends and stroll the space, taking note of what is fresh since the selection changes daily. Then split up and head for the lines, one each to the shellfish section, crab and lobster tanks, fried fish counter, and beverages. The one at the beverage line will get through first and can stake out a table and text the rest so they’ll know where it is. If you want to get the timing perfect, the one at the crab and lobster line should order first, because steaming large seafood takes 20 minutes while the other lines average 10.

If convenience is more important than having a quiet dinner, grab a table close to the counter where orders are picked up, but be aware that you’ll be serenaded by echoing car horns and squeaking tires from the adjacent parking structure. It’s worth the short walk around the corner to the much more pleasant tables near the ramp to the pier.

As to what you might be carrying when you rendezvous at that table, I can give some suggestions based on two recent visits. On the first we ordered ahi poke, aguachile, calamari, a shrimp burger, some smoked fish, and a fish, shrimp, and chips platter. The poke was very good with a moderate spiciness that tasted of ginger, red and black pepper, and perhaps a dash of wasabi. One of the joys of poke is the cool, smooth textures balanced with spice heat, and this version nailed it and was a great starter for a hot day. The aguachile, raw shrimp marinated in lime juice with chillies and cilantro was quite a bit hotter, which is appropriate to this Mexican preparation. There was a little cucumber to cool it down, some red onion shavings to heat it up, and it should make any fan of spicy ceviche happy.

I had ordered the smoked fish as a starter on a whim because they have an unusually wide variety, and got small pieces of shark and mahi mahi. The mahi was good, the shark rather dry and chewy, so I took that home to use in a soup or some other recipe. 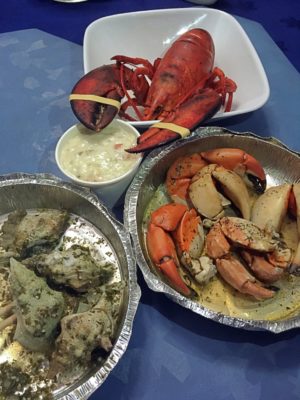 The calamari was also a disappointment, chewy and leathery rather than crisp, but the house-made ground shrimp burger was a pleasant surprise. I ordered it because the person at the counter said it was one of their better items, and they steered me right. The dense breaded shrimp patty arrived crisp with the interior steaming, and it had just enough seasoning to keep us eating to figure out what it was. We didn’t, but I’d have another one to find out.

As for the fish, shrimp, and chips platter, the seafood was served in a crisp beer batter and had a fine, fresh taste. We were given cocktail sauce but didn’t use much of it, because it was fine just as it was. The fries were okay, but I wished I could have gotten onion rings instead because they’d be great with that batter.

The drinks section is decently stocked with beers and soft drinks but doesn’t have much for those who prefer wine. They did have sake and a pineapple-cactus cider that my wife ordered, while I had a mango wheat ale from Golden Road brewing. The flowery sweetness of the mango with the ale bitterness was a fine combination with the food, and I recommend it.

That dinner for three ran $65.83 and showed the strengths of their fryer counter. I returned to pick up dinner that would showcase the contents of the live tanks. After a wistful glance at the oysters (20 different kinds), I got one of my wife’s favorite meals: a fresh steamed lobster and some king crab claws. On a whim I also ordered steamed local conch that I was informed had just been brought in. I’m mainly familiar with these large marine snails in stews from around the Caribbean but wanted to taste them on their own. After placing my order and paying at those two counters, I headed back to a third counter to get a cup of chowder, because you can’t visit a seafood place and not try the chowder. About 20 minutes later I was headed for the parking structure with a bag full of seafood goodness, which I seat belted in with care. I arrived without spilling a drop and with a raging hunger after smelling it all the way home.

The chowder was unimpressive, a good portion of seafood in a broth that was thickened with flour and under-seasoned. Some herbs and pepper or bacon would have livened it up, but as served it was a bit too bland.

The other items we had ordered were deliberately under-seasoned – they were all about showing off the simple flavors of the seafood. A note for anyone who decides to try the conch – after you pry them from their shells, which can take a bit of doing, you will find that at one end is a round piece of shell, at the other some dark meat. Discard those and eat what is in between. The meat has the mild flavor and chewy texture of escargot, and like that delicacy is best with garlic-herb butter and a dash of pepper.

The lobster I selected was just under two pounds, and all the easily accessible meat was in the claws and tail. There wasn’t a huge amount of it, but it was so rich and filling that it felt like more. I recommend that you have some poultry scissors and nutcrackers at the table, though a clean pair of pliers and some wire cutters will do in a pinch. Those will be helpful when dealing with the crab claws too. The meat that you’ll get from both of these had the delicate flavor of the sea, and the texture that is the major attraction of fresh rather than frozen products. Lobster that has been frozen can taste fine, but the texture is often mushy, without the springiness we experienced here. It’s more pricey, to be sure – the small lobster ran $34, a pound of crab claws $20, but it was a delightful weekday splurge.

The bustling, slightly chaotic atmosphere of this old-school fish market is polarizing – some love the authenticity of the place that has been in business for almost 70 years, others fault the noise, lines, and inefficient ordering system. It’s a worthwhile experience for those who appreciate the freshest seafood, and a taste of the way fish markets used to be when all of our grandmothers took their day trips to the beach holding their parents’ hands.