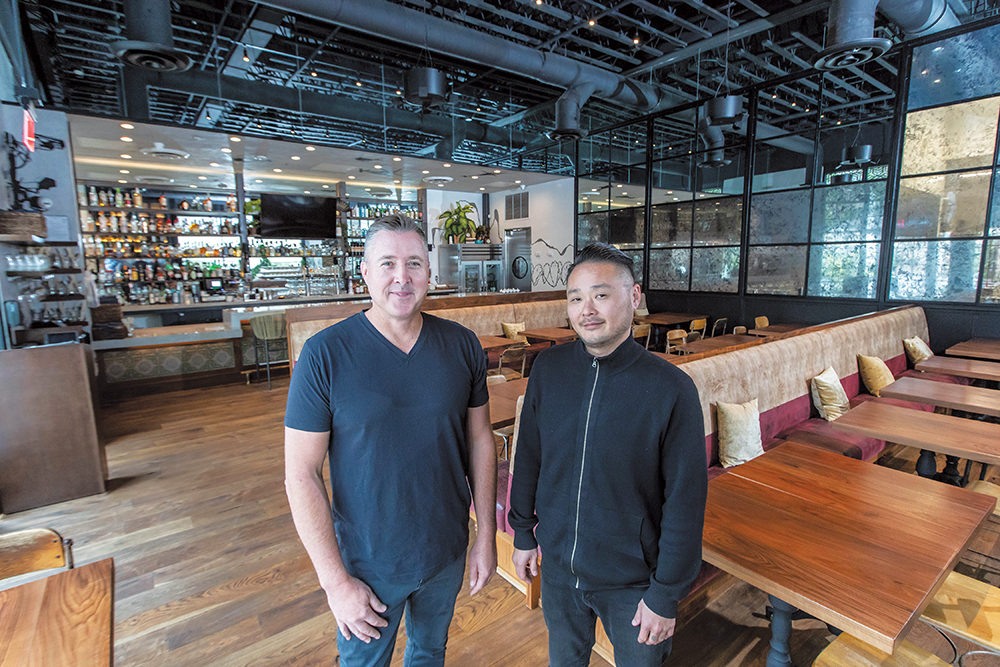 When Chef Tin Vuong opened the first Little Sister restaurant in 2013, the food was an unusually personal expression of his family’s history. As the South Vietnamese regime teetered, uncles and cousins scattered to whatever country would give them refuge, winding up all over South Asia. They reunited in the USA, IN the San Gabriel Valley to be specific, having acquired a taste for the flavors of far-flung lands.

Tin absorbed those ideas, added what he learned in the 626 area code, and put them all on one menu alongside Vietnamese dishes from his ancestral home. The restaurant offered Balinese meatballs, Chinese numbing-hot pickles, Burmese papaya salad, and Hong Kong noodles, among other items. This was served in an environment some found disturbing, where the walls featured stark silhouettes of barbed wire, guns, and helicopters juxtaposed with butterflies and birds. Hip hop music set a throbbing pulse at a volume that sometimes approached painful. It wasn’t remotely like anything else in the South Bay, and some diners loved it while others were baffled. Other outlets followed in Redondo, Downtown LA, and elsewhere.

The Manhattan Beach location closed in June of 2020, but fans were delighted to hear about a new location opening at The Point in El Segundo. Those who headed right over expecting the Balinese meatballs and ma la pickles were surprised when they got a look at the menu. Chef Tin has taken the restaurant in a new direction, focusing on modern Vietnamese food with robust spicing.

Traditional Vietnamese food has been available in the South Bay for over two decades, generally at everyday prices and in modest surroundings. Most offer similar menus: spring rolls fresh or fried, combination plates over noodles, and pho, soup traditionally made with various cuts of beef and a variety of vegetables in a rich bone broth. Little Sister is different – they don’t offer conventional pho at all. There is, however, a dish called pho banh cuon that puts the flavors of pho into a rice paper roll, and that’s as emblematic of the way Chef Tin innovates with flavors.

A recent dinner we started with “autumn rolls,” butter basted escargot pastries, and salmon crudo in herbed coconut milk with lotus root. The fresh oiliness of the salmon and richness of coconut milk were offset by bursts of flavor from pungent green herbs like perilla and Thai basil along with crispy toasted garlic. Lotus root adds crunch but not much flavor to dishes, and it was barely detectable as an element. There were some serrano peppers and purple onion in there too, enough to add a spicy kick, but they didn’t take over. The balance was even more delicate in the autumn rolls, which are much like standard pork and shrimp summer rolls but with jicama and sweet potato added to the usual Vietnamese vegetables. There was Chinese garlic sausage in there too, and that slightly sweet flavor fit right in. Peanut sauce was provided for dipping, and can be used sparingly because there are so many interesting things going on here already. This is an inspired take on a traditional item, and I highly recommend it.

The only item that we didn’t find noteworthy was the escargot “poppers,” a cylinder of puff pastry filled with chopped snail meat served with persillade sauce. Snail has a delicate shellfish flavor that needs embellishment, and there wasn’t anything distinctive. The parsley butter sauce was good by itself, and something I would have happily eaten on bread, but adding it to the buttery puff pastry was a bit much.

Our main courses were seared sea bass, charbroiled shrimp and pork over vermicelli, and a lemongrass-grilled pork chop over chicken fat rice. I ordered that last item for the rice as much as anything else, having had plenty of rice cooked in stock but none I could remember cooked with the fat. It added silky richness as well as flavor, and was much more than just the starch to go with the protein. The lemongrass pork had smokiness from the grill along with the distinctive herbal flavor. It was topped with a fried egg and served alongside a salad with lots of toasted garlic and what I think was raw shallot – it was something with a strong oniony kick. The spicy greens were a good complement to the rich pork and rice, another example of Chef Tin thinking through all the flavors on a plate.

The other two items seemed a bit more traditional, but still had individual touches. The sea bass had a slight caramelization that might have been from Vietnamese fish sauce and ginger, and it was served with a small mountain of salad, julienned pickled carrots, and noodles with dipping sauce. The charbroiled pork and shrimp was a similarly hefty portion and was almost conventional in concept, but as with the other mains, the flavors were zingier than is typical. The flavor profile was different from Thai food, which uses tamarind and different chillies, and not quite like anyplace else. This is Vietnamese food with prime ingredients and the flavors amped up, and if this represents a new style of cooking from the San Gabriel Valley’s community interactions, it’s a style that could catch on.

The cocktail menu has a bit to do to catch up with these flavors – the drinks are well made but most don’t have quite the same flair. The “Stoney Negroni” is a gimmick with a burning tealeaf on the side of the glass – it’s cute but adds nothing to the flavor. The “Old Drunken Master” points the way with a mix of bourbon, herbal liqueurs, and bitters that matches the style of the food. The bartender said the cocktails are a work in progress.

For dessert we tried chocolate cake, a luscious version of a standard item, and a pecan tart that used raisins and a bit of ginger to excellent effect.

On a midday visit I tried their banh mi, the classic Vietnamese-French sandwich made with fresh and pickled vegetables along with various proteins. The pate with grilled pork was solid, the flavors just as they should be, but they hadn’t drained the pickles so it came out a bit soggy. That misstep aside, it was something I’d have again, because it was a splendid lunch. One note, though – this is not fast food, and it took at least 25 minutes, even though the place wasn’t packed. It’s worth the wait, but if you are in a hurry, you might call in the order.

The Little Sister at The Point is somewhat quieter than the shuttered original, and has a pleasant outdoor patio. The food is as good as ever and despite the narrower focus there is something here for anybody who loved the original.