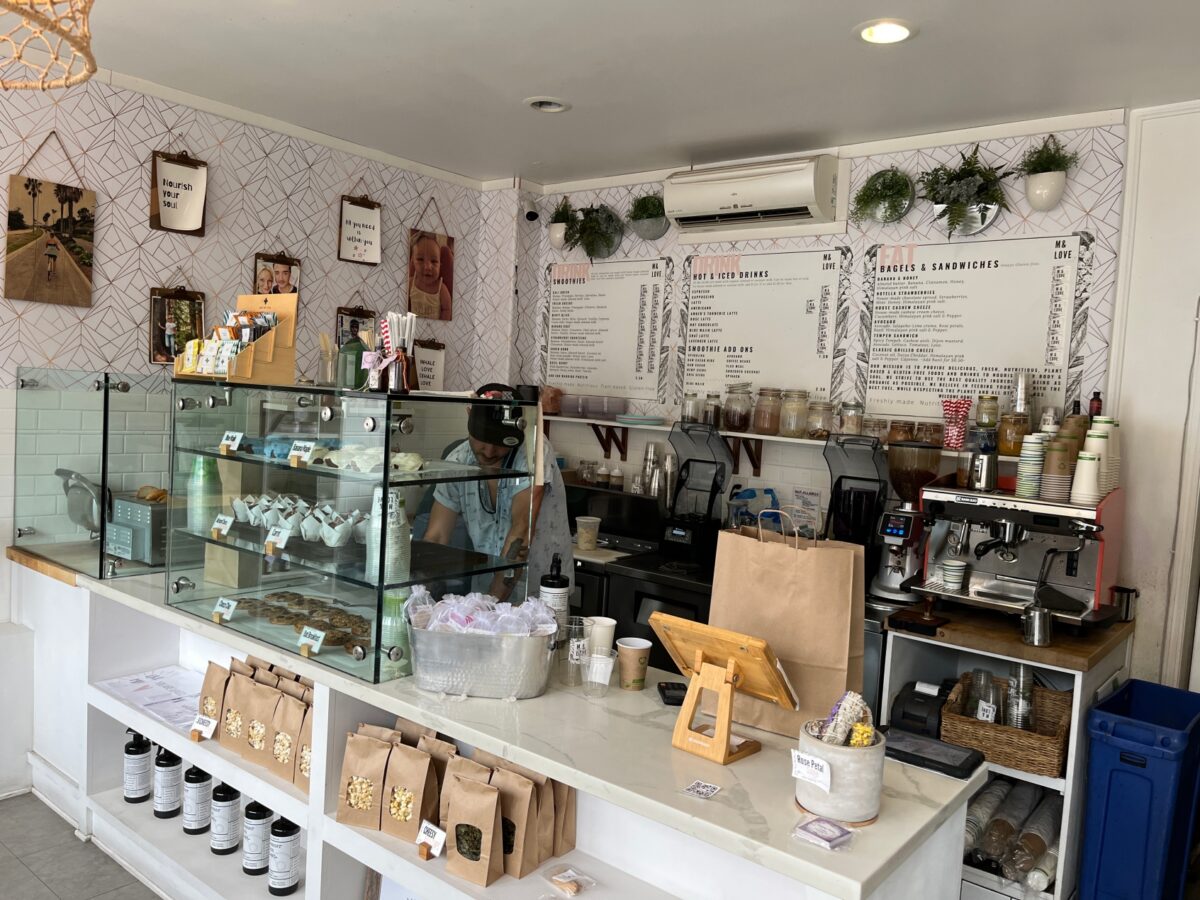 M & Love’s interior is cozy, with a deli case of grab and go items, but no inside dining. Photos by Richard Foss

I have heard some interesting arguments about vegetarianism and the vegan diet. Some point out that humans evolved as omnivores, with a natural craving for protein rich meat and dairy items. Those on the other side point out that the success strategies that worked on the savannas of Africa aren’t necessarily relevant to the planet we now live on. I can’t remember any of these arguments ever convincing people on the other side, but they continue to happen because people are passionate about their food.

I am firmly in the omnivorous camp. If eating just about everything wasn’t part of my job, though, I would be consuming a lot less meat. I’m delighted when I find a place that makes satisfying and creative vegan food, so I was interested when M & Love Café opened in North Manhattan Beach.

Their location on Highland by 33rd is small, but has relatively high visibility thanks to a giant sign and the white stools on the sidewalk. The space inside is cozy, with most space taken up by shelves of beauty and food products, a deli case of grab, and go items, and a long couch where people sit while awaiting orders. There’s no room to dine in, but with the beach three blocks in one direction and Sand Dune Park four blocks in the other, it’s convenient for a picnic or to take to home or office.

Everything they serve is gluten free and vegan, so people with those dietary restrictions are covered. Other needs are harder to address, because the menu is badly written, with oblique descriptions, or none at all. For instance, would you order something called “Bliss Balls” with no idea what it was? If you did and have a peanut allergy you’d be in trouble, because it’s a peanut butter based sweet that for some reason is in the grab & go section rather than listed among the desserts. The packaging for every item has a comprehensive list of ingredients, and they could have easily put a link to the label on their website, but for some reason they didn’t.

On my first visit I ordered something I thought couldn’t possibly work: an avocado bagel with jalapeño-lime crema, rose petals, basil, Himalayan pink salt, and pepper. My skepticism was partly based on the unusual pairing of avocado, basil, and rose petals, and partly because I had never had a gluten-free bagel that remotely resembled the classic version. Surprise, it was excellent. The bagel didn’t quite have the balance of slightly tough exterior and interior chew of the traditional version, but it was the most bagel-ish GF product I have ever had. It passed the test of reminding me closely of a bagel, and the slight sharpness of basil and faint floral scent of the petals was a genius pairing with the avocado. Putting rose in anything savory is a dealbreaker for a lot of people because they expect an overwhelming floral sweetness, but judicious use of rosewater and rose petals give Indian and Persian cooking part of its appeal.

Their tempeh sandwich with cashew aioli, dijon mustard, and avocado with lettuce, and tomatoes was just as good, though I’d take issue with the description of the tempeh as spicy. There was a little warmth from smoked paprika, but it was still mild. Had I not known the bread was GF, I wouldn’t have guessed, and the mix of flavors and textures was well balanced. 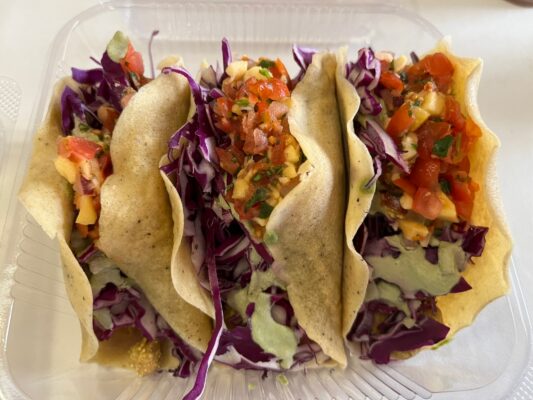 Other items unfortunately didn’t work quite as well. The “chickpea tacos” were a set of good flavors messed up by a flawed presentation. A mix of whole garbanzos, chopped purple cabbage, tomatoes, mango, and onion was mixed with mild Indian spices and then put into cassava and chickpea flour crepes. If this had been done just before serving the crepes probably would have held together, but the moisture of the vegetables and the lime crema sauce soaked them through, so they fell apart almost instantly when you picked them up. It wouldn’t be difficult to sell these with the tortillas separate so that people could fill them themselves, or to abandon the idea of calling this a taco and selling it as a salad with the tortillas crisped and added at the last minute. If either of those were done, I would recommend this item.

I can’t say that I’d recommend the pesto zucchini “noodles,, though. This was simply zucchini run through a spiral slicer with tomatoes and chunks of apple, accompanied by a fairly standard pesto sauce and a hemp seed “parmesan” topping. It wasn’t bad, but at $15 for something anybody could make with a few minutes work and a few cents worth of common ingredients, it did not justify the price. The sandwiches and other items were similarly priced, and I didn’t mind because they were complex, with  unique preparations.

The desserts at M & Love were a mixed bag – the carrot muffin was excellent, and indistinguishable from a conventional one. The banana maple doughnut wasn’t fried, and was really more of a disc shaped cupcake, but had a very good cake base. I found the frosting too sweet with both sugar and maple flavors, and would have preferred a lighter touch with it, but there was enough contrast with the cake to make it enjoyable. This wasn’t the case with the “blue majik” doughnut, which had a sweet cake with sugary frosting. It would’ve been better to focus on the flavor of the berries and not try to enhance them with extra sugar.

A variety of coffee drinks are offered, though the menu does not note that they’re decaf. We decided on “minty bliss” and chocolate bomb smoothies, and were glad we did. The chocolate smoothie was made with almond milk and included bananas, dates, and almond butter along with a lot of cacao powder. Though the ingredients list didn’t include chillies there was a taste like a tiny bit might be lurking in the background. The texture was very thick and I got the last of it out of the cup with a spoon, because it was good enough to chase around.

I had ordered the minty bliss because I couldn’t imagine what it would taste like to mix bananas, dates, mint, spinach, vanilla, cayenne, and cacao nibs. I have no idea what possessed someone to toss all of those things in a blender, but it was an inspired moment. I really could drink one of these every day and enjoy puzzling out the way that all the flavors work together.

M & Love needs to work on the way they describe their food, and tinker with the presentation on the garbanzo tacos, but much of what they do is exciting and creative. Prices are on the high side compared to conventional restaurants, but this is not a conventional restaurant. They’re using top quality produce and exploring ways of using it in unorthodox ways. If you’re vegan or vegan-curious, GF or having brunch with somebody who is, you should order your next picnic there.