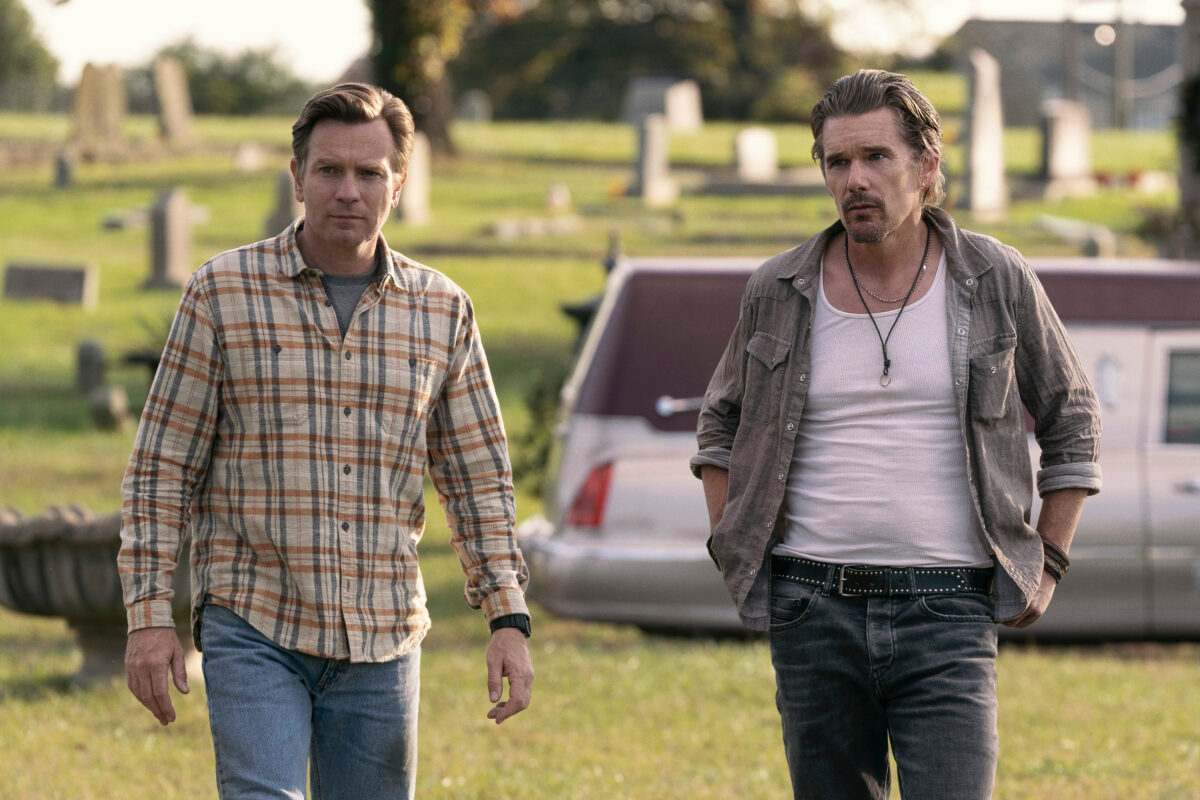 Ewan McGregor as Raymond and Ethan Hawke as Ray in "Raymond and Ray." Photo courtesy of Apple TV+.

“Raymond & Ray,” a complex portrait of half brothers who shared the same dysfunctional and abusive upbringing, delves into the aftereffects of becoming the same in different ways.

Raymond, identifiable immediately by his crisp khakis, uncomfortable demeanor disguised poorly by the tight smile on his placid face, arrives unexpectedly at the hovel his half brother Ray calls home. As he gets out of his family van, an attractive, if rather used, young woman is seen leaving the premises. Warily approaching the door, Raymond knocks and knocks and knocks. Eventually a disheveled Ray answers, as visibly annoyed as Raymond is fearful. Raymond has come to announce that their father has just died. The blank stare on Ray’s face classically imparts his response, “So?” 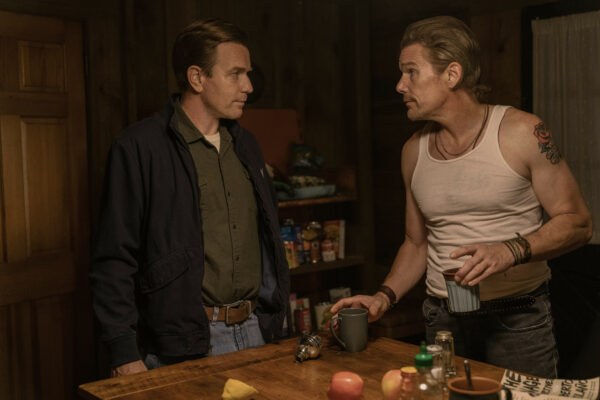 Ewan McGregor as Raymond and Ethan Hawke as Ray in “Raymond and Ray.” Photo courtesy of Apple TV+.

Thus begins an unlikely road trip. Their late father, whom neither had seen nor communicated with for many years, had a last request. He wanted Ray and Raymond to attend his funeral. Ray is less than interested in complying with the wishes of the father who stole his future, one where he was smart and talented and showed actual promise. Instead Ray ended up a failed musician, the widower to a loving woman who died too soon, and a former heroin addict. Why, he wonders, would Raymond want to do anything the old man wanted? Raymond, too, failed in life, a failure that could be traced back to his father’s ridicule, abuse, and the chaos that made him become the boring, uptight man who sought solace in an uninteresting job that offered the stability he needed but closed him off from the people who loved him, two ex-wives and a soon-to-be ex who saw something they were never able to reach.

Raymond wants to go in hopes of finding some closure. Ray agrees, but only to support Raymond with whom, at one time in the long ago past, he shared one of the closest relationships he ever experienced outside of his much missed wife. He’ll go, but he won’t make it easy. Together, their differences are exaggerated. Ray has the easy charisma of a player who needs merely to bat his eyelashes and women fall at his feet. Raymond is the embodiment of the Felix Unger character in The Odd Couple described as a clenched nerve. He looks, he longs for, but he doesn’t act.

Arriving at the funeral parlor, they discover additional requests by their father. Not only are they to attend the funeral, but they are to dig his grave and drop his pine coffin within. Further, their father requested that he be buried nude. Since it is to be an open casket, the funeral director suggests a shirt to cover the emaciated chest that will show. Like a dutch door, only the top half of the coffin will be open.

The preparations and the funeral itself bring the men into contact with those who had relationships with their father, illustrating that he was many disparate things to the different people in his later life. Foremost among them is Lucia, his last lover and father of her son Simon. Kiera, his nurse, comes out of curiosity and stays out of an attraction to who Ray might be under freer circumstances. 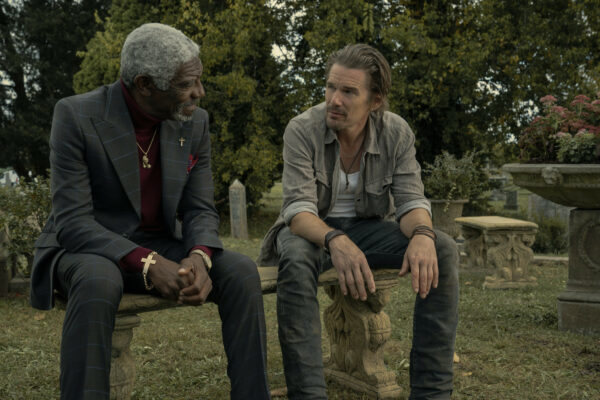 Vondie Curtis Hall as Reverend West and Ethan Hawke as Ray in “Raymond and Ray.” Photo courtesy of Apple TV+.

Arriving at the gravesite, they are greeted by the Reverend West, a rather showy individual who claims to have been their father’s spiritual advisor. West, with his gleaming toothy smile and his shiny gold jewelry, knew a different man than they did, recognizing that he was more than the sum of his parts while also being considerably less than. His spiritual guidance is subtle and affecting in his non-judgemental approach.

More surprises arrive at the gravesite with the appearance of new found relatives. Their father was nothing if not prolific.

Written and directed by Rodrigo Garcia, this is a deep dive into the intricacies of relationships, especially those that come under the category of “coulda, woulda, shoulda.” This is an arena that is probably more personal to Garcia than evident. He was the son of Gabriel Garcia Marquez, the Columbian Nobel Prize winner in literature. Marquez lived a somewhat peripatetic life filled with politics, uprootings, and larger than life characters. How do you emerge from such an enormous shadow? Complicated family dynamics are surely in Garcia’s wheelhouse and his exploration in “Raymond & Ray” is deep and infused with the understanding of what happens when promise is unfulfilled and life derails. 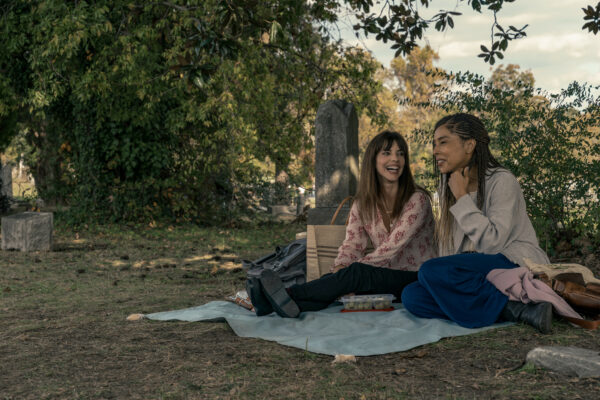 Maribel Verdú as Lucia and Sophie Okonedo as Kiera in “Raymond and Ray.” Photo courtesy of Apple TV+.

Casting in this film is a particular strength, right down to the small but pivotal roles. Tom Bowers as the funeral director is a study in controlled confusion, calmly presiding over a circus. Maribel Verdú as Lucia grows in warmth and complexity as the story progresses. The always marvelous Sophie Okonedo, Kiera, is dazzling in her seeming ambiguity to the funereal events. She instantly understands Ray and although she tries to help him, she refuses to be taken in by him. Vondie Curtis-Hall as the Reverend positively lights up the screen with his dazzling smile and knowing eyes. He has always been a favorite of mine and it is surprising that he appears so seldom because there is a depth to his performances that always enhances the roles he plays.

Ewan McGregor is so effective as the uptight Raymond that you come to believe that he really is as one dimensional as he believes he is. Only gradually, in keeping with the unwrapping of the layers in this film, does one gradually come to see what lies beneath the frustration.

Ethan Hawke as Ray is a true star. Scarred, cynical, ruined, he is a bad boy who ran to seed and is carefully managing what he can and letting go of what he can’t. From the moment he appears on screen, you know who he is which makes his gradual, and rather miniscule growth all the more effective.

Like any film that values character development, Garcia has given us a film where no one is the same at the end as they were at the beginning, even if those changes were barely visible.

Premiering on Apple TV+ on October 21.