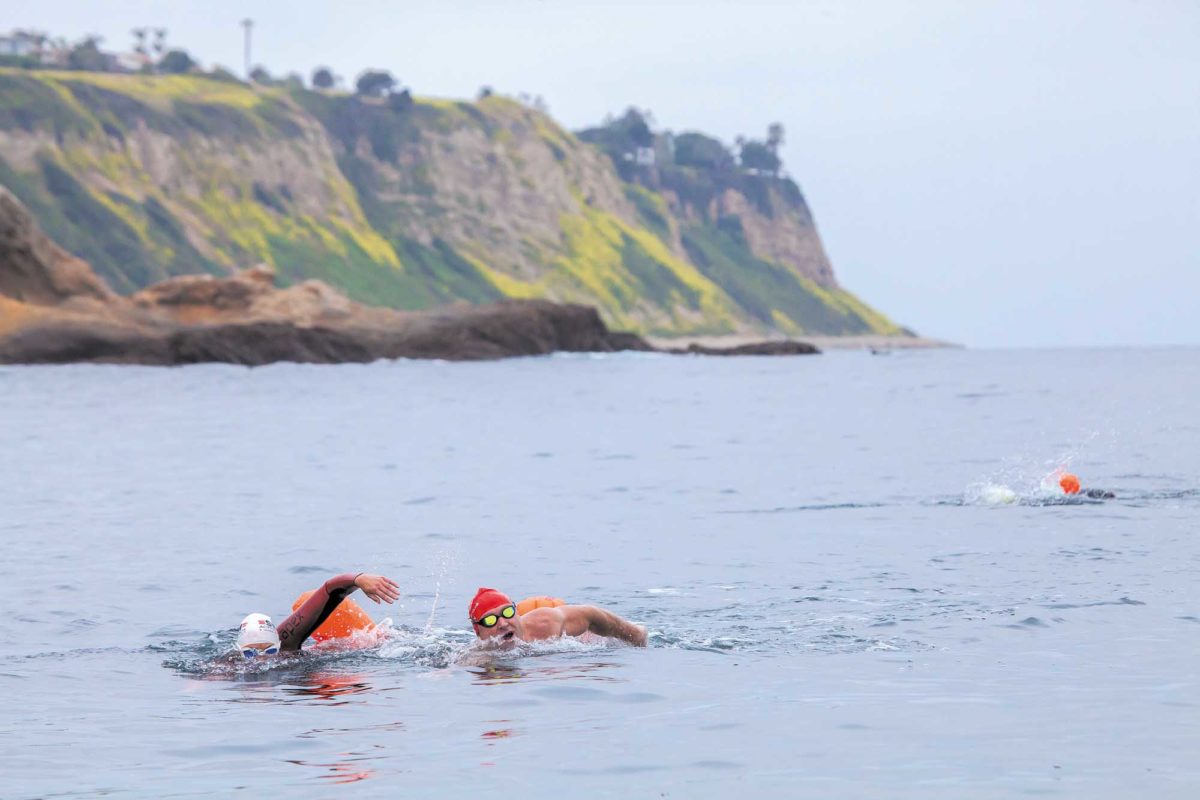 For many, many minutes after open-water swimmer Quinn Fitzgerald marched himself out of the ocean off of Torrance Beach, following a test swim on a Thursday morning in May, he was unable to peel the smile off of his face.

“It was beautiful, refreshing. It was pretty great to see dolphins — multiple dolphins,” Fitzgerald said. “It really brings to light that you can’t come up with a better location for an open water race…not to mention, the LA ’28 Olympics.”

Fitzgerald is a well-known open ocean swimmer and member of the Board of Directors for the World Open Water Swimming Association. And thanks to him and Steve Munatones, WOWSA’s founder, Redondo Beach and the South Bay will be the site for the World Open Water Swimming Association’s Ocean Fest 2019 in October — and, if they can pull enough strings, the 2028 Los Angeles Olympics’ 10 kilometer Marathon Swimming event.

First, Redondo needs to get through its own, second annual Swim the Avenues ocean swimming event, planned for this Sunday, July 14.

As it currently stands, a series of LA’s 2028 Olympics’ ocean events are planned for Long Beach’s Convention and Entertainment Center, part of a hub of activity in and around Downtown Long Beach, with marathon swimming and triathlon events planned along its waterfront.

When Mayor Bill Brand heard that, he thought, why not the South Bay? Why not Redondo Beach?

“Last year, Bill reached out to me and said he needed an event — he needed something to promote the South Bay and Redondo,” Crump said.

The two are longtime friends: Crump remembered first meeting Brand outside of Whole Foods, while Brand gathered signatures for a political campaign, and the two sportsmen got to talking. Years later, Crump was among the first people on Brand’s mind for this event.

“I think he wanted to highlight the elevated viewing position from the Esplanade and start building a tradition,” Crump said. “Redondo’s looking to have that open water tradition — Manhattan Beach has volleyball, Hermosa has surfing, now you’ve got an open-water swimming venue and you put Redondo on the map.”

Last year’s Swim the Avenues event — featuring both one mile and half-mile races — was a great success for Crump and his business partners Mike Ward and Bryan Mineo. The three originally planned for a maximum of 300 registrants, and had to scramble to find more than 100 additional swim caps.

This year, Swim the Avenues will continue to have its one mile and half-mile swim — but Crump is expecting as many as 500 swimmers, capping entrants at 600. 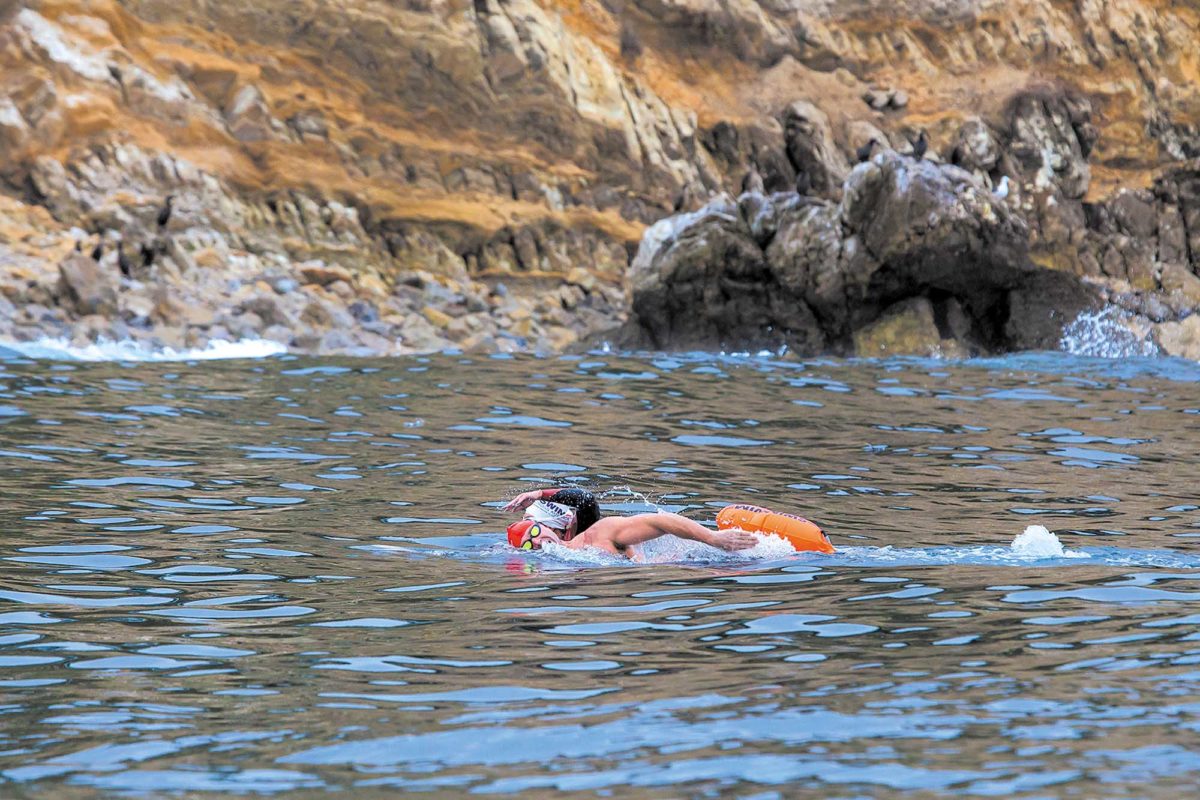 What’s new this year, Crump said, is the introduction of a team trophy, a perpetual trophy that will bear the names of the winning team based on the five top-scoring swimmers in their races.

Also, new this year: Crump will be running the race, the first time he’s competed in an event he’s organized since taking over the Redondo Beach Triathlon in 2006.

As for Brand — who, alongside Councilman Nils Nehrenheim, was among last year’s earliest race registrants — Crump has been told that the mayor will be swimming tethered to another competitor, owing to Brand’s recent cancer diagnosis and concern for seizure.

Brand has long been a champion of the city’s dream to hold an event during the 2028 Olympics, telling Easy Reader in 2017 that “these things don’t happen unless you take some chances and present yourself in the race. I’ve been trying to get my nose in the tent to get some of these events,” reaching out to the 2028 Los Angeles Olympic Organizing Committee, to both LA Mayor Eric Garcetti and LA28 head Casey Wasserman to inform them that Redondo has maintained interest in hosting events — especially the open water swim event.

The trouble with that angle is that one of LA28’s main selling points in its bid to host the games is its ability to center a variety of events in hubs: Downtown and South LA, the Westside, the San Fernando Valley, Inglewood, Carson, and Long Beach. Consolidating events allows easier logistical planning, including traffic and security setups.

Councilman John Gran is a member of Redondo Beach’s Olympic Sub-Committee, and acknowledges that reality.

“The folks at LA28 were very clear with their message about Long Beach, and we understand their needs and concerns,” Gran said. “If they reconsider it over the next eight years, great, but we’re not counting on it. Until then, we want to put on a great annual event.”

Gran credited Brand for being progressive and forward thinking in establishing the swim, continuing to say that WOWSA’s October event is an exciting international showcase for Redondo Beach.

“The organizers mentioned that almost all internationally recognized open-water swims are outside of the United States. The international body is looking for U.S. venues.”

Which just might work in Redondo’s favor. LA28 has a set of events planned for outlying venues, including Anaheim, the Rose Bowl, and San Dimas — why not Redondo? It seems to some like a no-brainer, considering the potential of hosting a swim alongside the picturesque bluffs of Palos Verdes versus one near the mouth of the Los Angeles River.

Munatones met Brand at an event in San Francisco last year, when the mayor explained his plan for a marathon swim in Redondo.

“Even though I grew up in Whitter, lived in Huntington Beach for the last 25 years and done lots of Catalina Channel crossings, I’ve never been from Terranea Point to here,” Munatones said. “I grew up here, and I can’t believe I missed this. Once I saw it, there was no doubt.”

For Munatones, the positives were easy to list: sweeping views of the Pacific Ocean, towering sea cliffs, wildlife, kelp beds — in short, the beauty of the Santa Monica Bay. “It’s everything we want to showcase in our sport,” he said.

So Munatones and WOWSA set out to ensure Redondo and the South Bay would be the host for the organization’s 2019 Ocean Fest, a multi-day event that features award ceremonies, workshops from ocean swimming luminaries and experts on health and best training practices and — of course — a dip into the local waters, with races planned from a 100 meter dash to the Olympic length 10km race. But to ensure they had the best plan for Redondo’s waters, a series of test swims were necessary.

On Thursday, May 2, the first of those swims took place; Munatones and Councilman Nehrenheim followed a group of swimmers as they took a test swim from Bluff Cove to Torrance Beach, surveying their surroundings.

“It was like swimming in an aquarium,” Kirt Kingzett said. “Malibu is nice, but here, you have this shoreline…I’d swim here again in a minute. Just saying, now I need to move to Redondo.”

Fitzgerald, the swimmer, and WOWSA board member, couldn’t help but note the swim’s beauty as he looked around for possible hazards, which were quite a few, he found.

“You don’t get a better view than the bluffs, the colors, the rocks — it’s really special, coming around that bend in Bluff’s Cove. It’s a majestic spot,” Fitzgerald said. “If you’re an open-water swimmer, you want to be in nature, in the elements, appreciating the beauty. These x-factors, wildlife, and surf, they make the sport, and they make the sport interesting.”

The question to him is, why hasn’t an Olympic Marathon Swim taken place in such a venue before? Since 2008, the 10 km swim has taken place in a rowing channel, a lake, and the coastline off of a Brazilian fort.

“Swimming in this water is clear, great scenery — you’re not swimming in a pool, it’s not a traditional coastline of sand and ocean and boring houses…it’s a vibrant coastline of different views, and it’s always changing on you,” said Nehrenheim, an experienced waterman in his own right. “Here it’ll tend to be a lot clearer, more sea life, and dolphins, and the currents aren’t as strong as in other areas…this puts us on the map for our culture of outdoor living.”

“This is just the first stroke toward LA28,” Fitzgerald said.

The Second Annual Swim the Avenues event takes place on July 14. Registration starts at $45, and increases on July 13. More information at rbopenwaterswim.com.

WOWSA’s 2019 Ocean Fest is Oct. 5 and 6, including events at Seaside Lagoon. Tickets for events range from $10 to $150; race registration ranges from $30 to $100. More information at openwaterswimming.com.