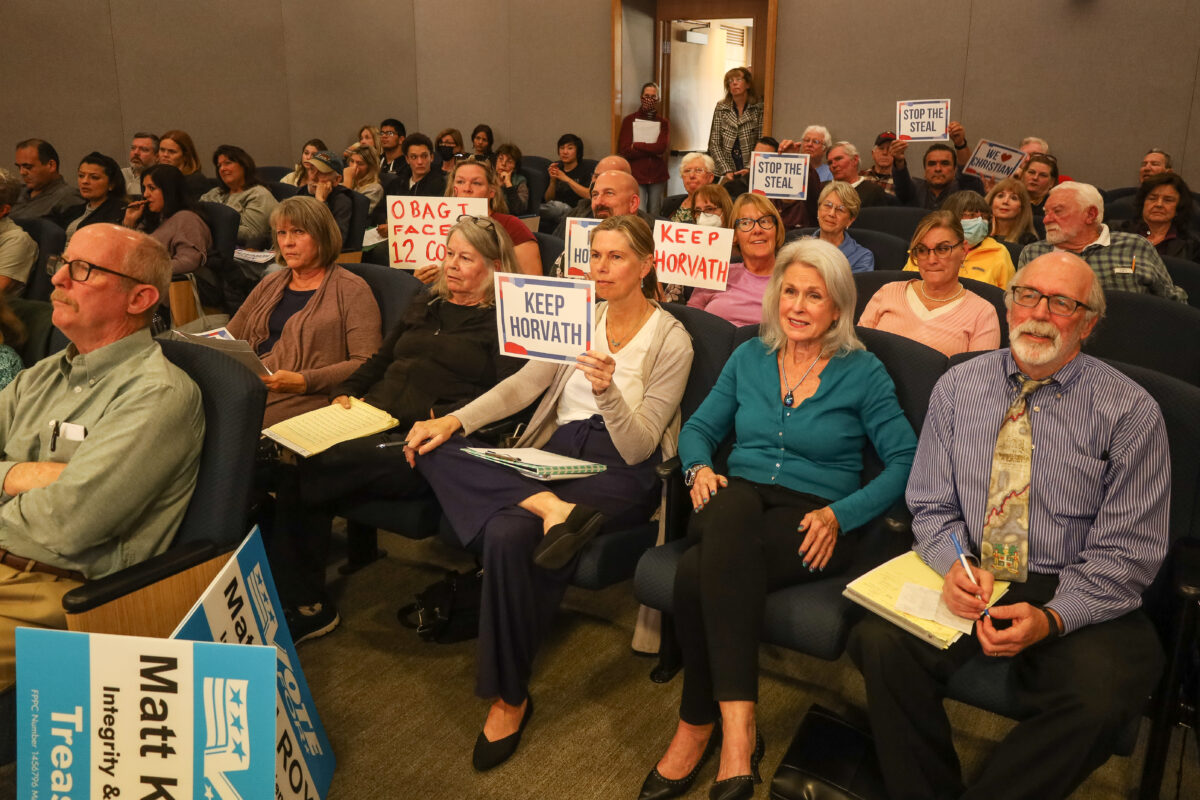 The crowd looks on during the proceedings Tuesday afternoon at city council chambers. The outspoken public comment largely echoed the signs being shown, and commented on the tone of current Redondo Beach politics overall.  Photo by Kevin Cody

In a two hour and 25-minute meeting Tuesday afternoon, called by Mayor Bill Brand on whether city councilman Christian Horvath maintained legal residence in Redondo after his family moved to Torrance, the verdict appeared to be in hand early on.

At the end, the city council voted 5-0 that Horvath had proved he remains a Redondo District 3 resident, and he would not be ordered to vacate his council seat.

Horvath has two months remaining on his eight years in office.

The rare 3 p.m. session in front of a packed council chambers drew public comment, in and out of turn, and calls for civility, along with probing questions of Horvath and councilmembers’ explanations that the residency question had to be addressed per city charter.

Mayor Brand was not in attendance.

“I was just overwhelmed by the support of those who came out,” said Horvath Wednesday. “And just super grateful for what, in my opinion, was headed toward a very different outcome had they not been there.”

Horvath explained it was the result of a mix-up by the L.A. County Voter Registrar’s office, after a family change of address.

His wife, three children, and father-in-law moved to a house in Torrance last July, while Horvath remained at their Redondo home with housemates, who helped offset the mortgage. He lives in the modified garage.

“You kind of brought this on yourself,” said Councilman Zein Obagi, Jr., in his case study presented at the meeting, showing pictures on the screen above council row. What was the definition of “domicile” as compared to “residence” in the city charter? Was Horvath’s Lexus in the driveway when it should have been if he truly still lived there?

Obagi concluded that the seat should not be vacated.

Councilman Todd Loewenstein said the city had to call the Tuesday meeting, but concluded he would take Horvath’s word about his residence.

The session began with comments from Mayor Pro-Tem Nils Nehrenheim about a lawsuit against himself and how his own residency was questioned in 2017 when he first ran for office. He told of a city attorney representative delivering a subpoena to an elderly relative’s house outside of Redondo Beach – which drew a counterargument from city attorney Mike Webb.

Nehrenheim then asked that the crowd stand up, hold up their right hand and swear to tell the whole truth during the session, to be sure the proceedings were clear of “rumor and innuendo.”

“This topic, to me, is very personal,” Nehrenheim said. “It’s very serious as a heart attack to me.”

He noted that he had uncomfortable questions, which needed to be asked of Horvath. Are he and his wife separated? Are they getting a divorce? Does any family member have a restraining order against him?

“No, my family doesn’t have a restraining order against me,” Horvath said, to laughter.

Nehrenheim continued, saying he stood in line at the Post Office for an hour Monday to get information related to changes of address.

“Our city charter doesn’t define what ‘resident’ means,” Obagi said, during his time to speak.

“Even if the garage is not hospitable, I think (Horvath) gets to remain as a councilmember here,” he said.

“If he is misrepresenting something with his lender is not before us today,” he said.

Nehrenheim added that only the body of the city council can determine residency, according to the charter.

“Mail forwarding is a change of address,” he said.

“No one’s buying what you’re selling. He has not vacated,” said Emdee, before commending the crowd. “I cannot thank you enough for showing up (at 3 p.m. on a workday) to do the right thing.”

City Attorney Webb confirmed that the city charter does not define residency. He cited the California Supreme Court.

“The right to hold office is a fundamental right… if there is any ambiguity (the elected representative) should remain in office,” Webb said.

Loewenstein offered his sympathies to Horvath for his family situation.

“Sometimes you have to do what you have to do for your family,” he said. “What you’ve shown so far is that you intend to live there… the fine line between residence and domicile, the state of California has wrestled with this many times… Christian has said he intends to live in Redondo Beach (for the remainder of his term), even though it’s been messy, I’ll take him at his word.”

Loewenstein also talked about the basis of the meeting.

“We as a council have to do our duty to uphold our charter,” he said. “We could’ve avoided this with some upfrontedness.” 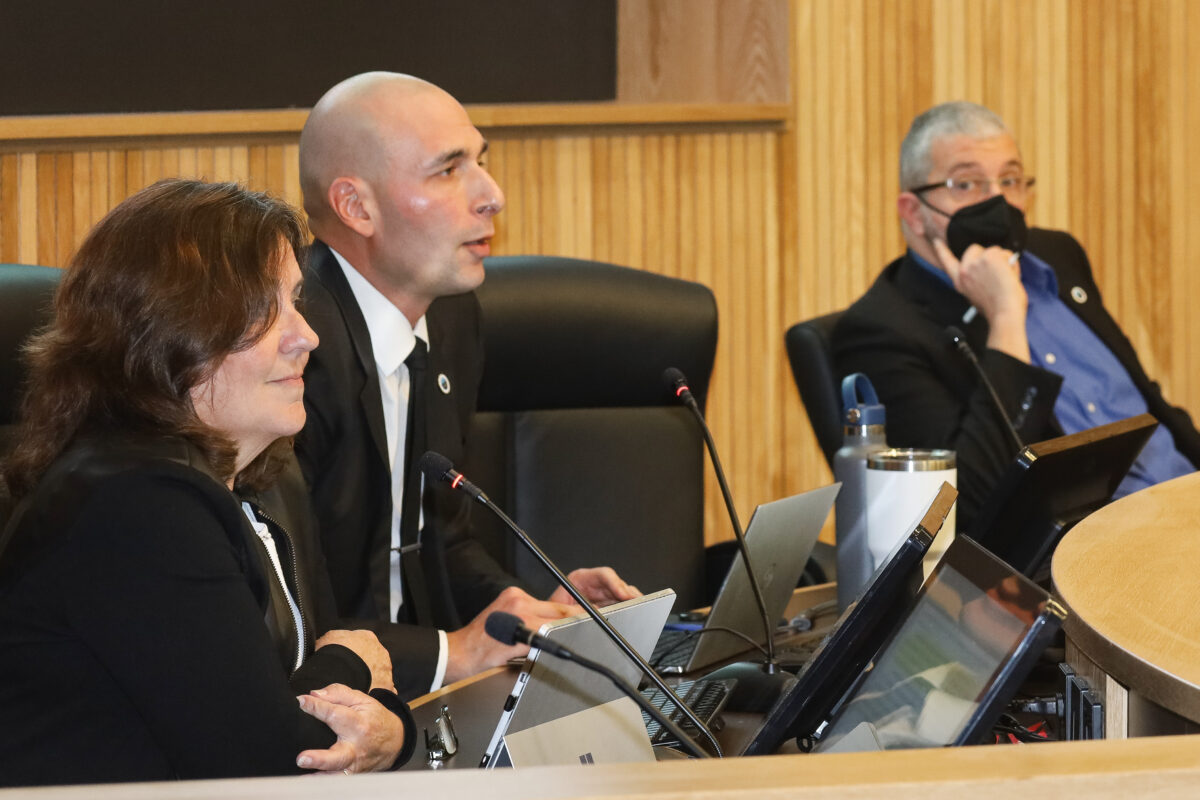 Public comments from the crowd numbered a couple dozen, the vast majority in favor of not vacating the seat. Among the speakers was former councilmember John Gran, who made his first public statement since losing his seat to Obagi in March 2021.

“Thank you very much, I know you’re doing your due diligence,” said Gran. “The acrimony within our city is what has created such a charged (subject); this should have been an administrative piece.”

“We need to be better than this as a city,” said another resident. “We shouldn’t be having this discussion at all.”

“This truly is a new low for all of y’all,” said another woman who came to the podium.

Holly Osborne called the matter that brought this on “logistical chaos,” and told of her brother moving their father into his house back east in the last years of his life.

“We are human beings, and we are professionals, let’s act like that,” said another speaker.

“It ultimately amounts to a clerical error,’ another said.

“Your comments sounded like they were coming from the point of vengeance,” he said, before making a specific legal point which Nehrenheim agreed with.

“I’m amazed that this is even happening,” said another speaker.

But another contended what Horvath did was “electoral and financial fraud.”

The man noted that he lives nearby and is ‘nocturnal’.

“Your car better be in front of that house every night,” he said as Nehrenheim told him that was enough.

Resident Joan Irvine criticized the meeting and said of Horvath, “You have been called the moral compass of the council, and you are.”

“If Mayor Brand is the only one who can call this meeting, why isn’t he in attendance?” said another man.

A speaker on Zoom said that he considered running for city council in District Five, but decided against it because of what he had seen and heard from this council, saying the city was losing out on quality candidates.

“I was told it was a hit piece. Please get along. It’s not a hit piece if you behave this way,” she said.

Another member of the public questioned Horvath.

“I am very disappointed. He was not forthright. If his intentions were for the city, he would’ve  been more forthright,” she said. “(But) I don’t think it’s appropriate to remove him from office with such a short time to go.”

“We have an obligation here,” Nehrenheim said nearing the conclusion. “Today I put my family second to be here. This is something we have to take very seriously. I apologize to anyone who thinks my words or questions were inappropriate, but I want people to understand… we have to go off of act and intent. Act and intent. I can’t go off of rumors, social media.”

He made a motion that Horvath had proven his residence and intent, that he had done what he needed to correct any errors.

Included in Nehrenheim’s motion was a directive to the city attorney’s office to modify the charter to clear up any ambiguity in the definitions.

Obagi amended the motion to “take no action based on Section 6.5 of the charter.”

The unanimous vote concluded the meeting. Horvath thanked people in the crowd. Maroko made a comment to Mike Webb, then stepped up to Nehrenheim. They shook hands and talked. ER

Horvath responds to council’s, others’ concerns

A day after the meeting, Representative Horvath said he had been prepared for a different vote by his fellow council members.

He cited the 3 p.m. time of the special meeting and the wording of the agenda.

“It seemed it was written in a way with a conclusion in mind,” he said.

Should he have been more upfront with the council, to let them know about the family’s move?

“I talked to my neighbors about it, and others,” Horvath said. “These are people I have relationships with. With the council, I don’t necessarily have those relationships. Just like I wouldn’t expect to know developments of Councilmember Obagi’s State Bar case, or his divorce. But I hear my colleagues, that I should have let them know. (Some) things in my family are private. I really wasn’t sharing it with (many people).”

Should Horvath have recused himself from the vote about his own seat?

Mayor Bill Brand gave a statement to Easy Reader after Tuesday’s session, in which the city council decided not to vacate Christian Horvath’s District Three seat.

“I called a special meeting because there was concern among Councilmember Horvath’s neighbors that he didn’t live in his district anymore, which is addressed in both our City Charter and State Code,” said Brand. “Plus, he went on Facebook and stated his intention was to ‘remain’ in Torrance after his term on the Redondo Beach city council ended. Where one intends to remain is used in State Code, Section 349, to define residency. This created a lot of confusion and was worthy of a special meeting, but the council decided unanimously not to vacate his seat so that’s the end of it.” ER