Redondo goes for the gold with Ocean Fest event 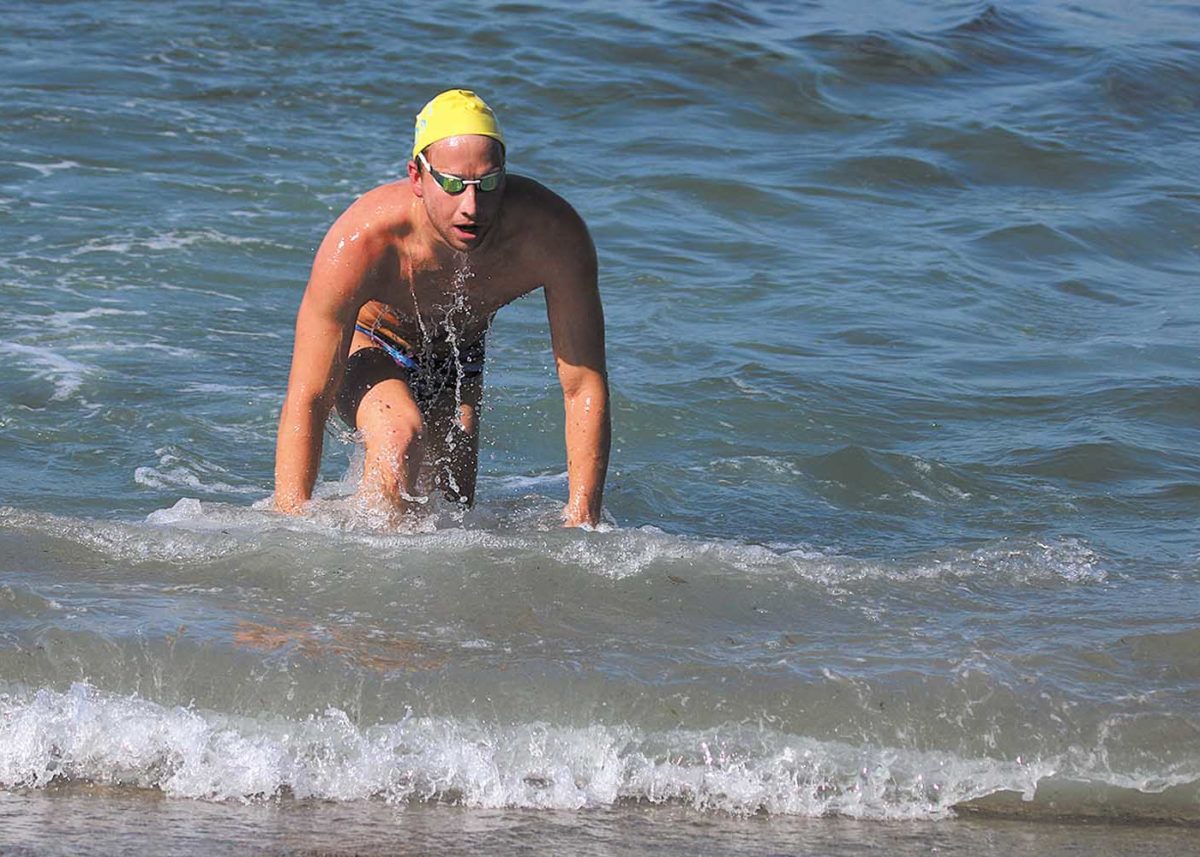 Ever-dominant Hermosa Beach swimmer Ryan Bullock continued his roll of victories in South Bay swimming events on Sunday, as he cruised to a first-place finish in the 10K marathon swim during the World Open Water Swimming Association Ocean Fest 2019.

WOWSA’s Ocean Fest, organizers said, was the first step in a 10-year plan that hopes to bring an Olympic event to Redondo Beach, by prying the Marathon Swim from Long Beach Harbor to the South Bay — and in the process, turning Redondo Beach into a West Coast hub for open water swimming.

Redondo has been home to triathlons for years, and the Beach Cities have a long, storied history of ocean sports, but the 10K was a first — both for Redondo Beach and for Bullock.

“I was just waiting for the turnaround — an out-and-back course is brutal the first time,” Bullock said. “When you’re swimming — you have the water at eye level — you can’t see the end of the course, only the next buoy in front of you…but I handled it well, and I knew that once we hit the turnaround, I could pace out how long I had left in me.”

Bullock is well known in these waters — this year, he won his fourth straight (and fifth overall) Dwight Crum Pier-to-Pier Challenge — and unrivaled as of late, winning the 10K with a time of 2 hours, 11 minutes, 54 seconds. His next-closest competitor in the day’s race, Casey Powers, of Los Feliz, finished nearly seven minutes behind, at 2:18:25. Sandra Frimerman-Bergquist, of Bloomington, Minn., was the first woman to finish the 10K, and the third finisher overall, with a time of 2:20:30. 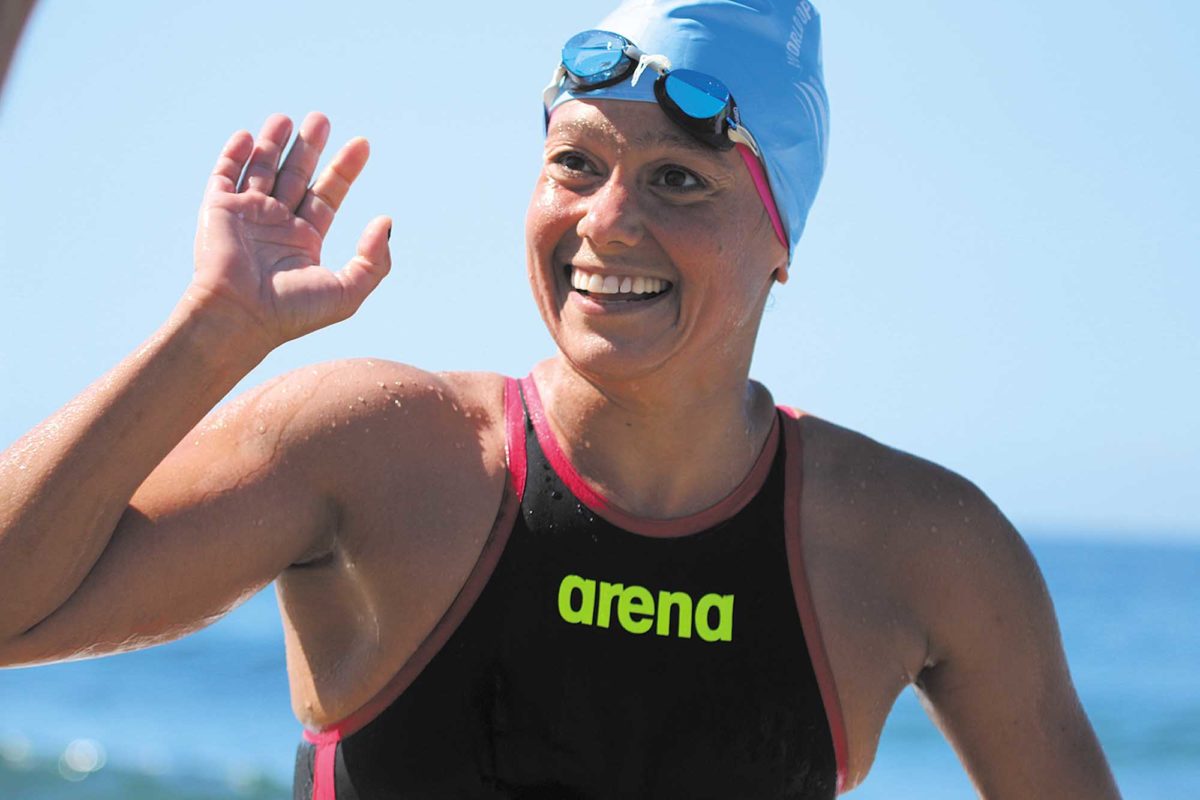 Sandra Frimerman-Bergquist, of Bloomington, Minnesota, was third overall in the 10K, in a time of 2:20:30. Photo

But the day’s fastest race belongs not to Bullock, but to a man who has already qualified to represent the United States at the Tokyo 2020 Olympic Games: Jordan Wilimovsky, 25, of Venice, who won the 5K race in 1 hour, 2 minutes and 42 seconds, at a 20 minute, 10 second per mile pace — six seconds faster than his compatriot Matan Roditi. There could be an asterisk attached to that time, however: Wilimovsky turned back just as he reached the Surfline to urge Roditi on, causing the two to cross the line in quick succession.

“It was warm and super fun to have it out here,” Wilimovsky said. “This is a good place; it’s cool for spectators to be on the beach like this to watch.”

Wilimovsky started the race among a group of 5K “elites,” a division that consisted entirely of athletes affiliated with USA Swimming. His placement came only one minute and 11 seconds before the next major notable in the group, Haley Anderson, 27, of Santa Monica — and formerly of Manhattan Beach.

Anderson is the only American swimmer to have medaled at an Olympic open water swim, having won the silver in the London 2012 games.

Anderson and Wilimovsky are among the first two open water swimmers from the US to qualify for next year’s Olympic games, alongside Ashley Twichell. Anderson also won the silver medal in this year’s world championships.

“The weather’s nice, the water’s nice…it’s always fun to be in a local race like this,” Anderson said. “It’s always fun being down here.”

She’s no stranger to the pier-to-pier either, though she’s never competed. “But I’ve done it for fun,” she said.

“It’s awesome to see them putting on a great race and testing out potential locations,” Anderson said, when asked what she thinks about how this race fits into Redondo’s bid for the 2028 Olympics. “I’m excited to be out here to support them, and this is a great spot.”

Bullock agreed. “I think it’s a beautiful venue and course. I think they did a really good job putting it on for the first time, and I think, from a course standpoint, it’s unique, and it has a beautiful coastline view,” he said. “I think there are always some things that have to be worked out, but overall, it would be such a unique place to have the Olympics.” 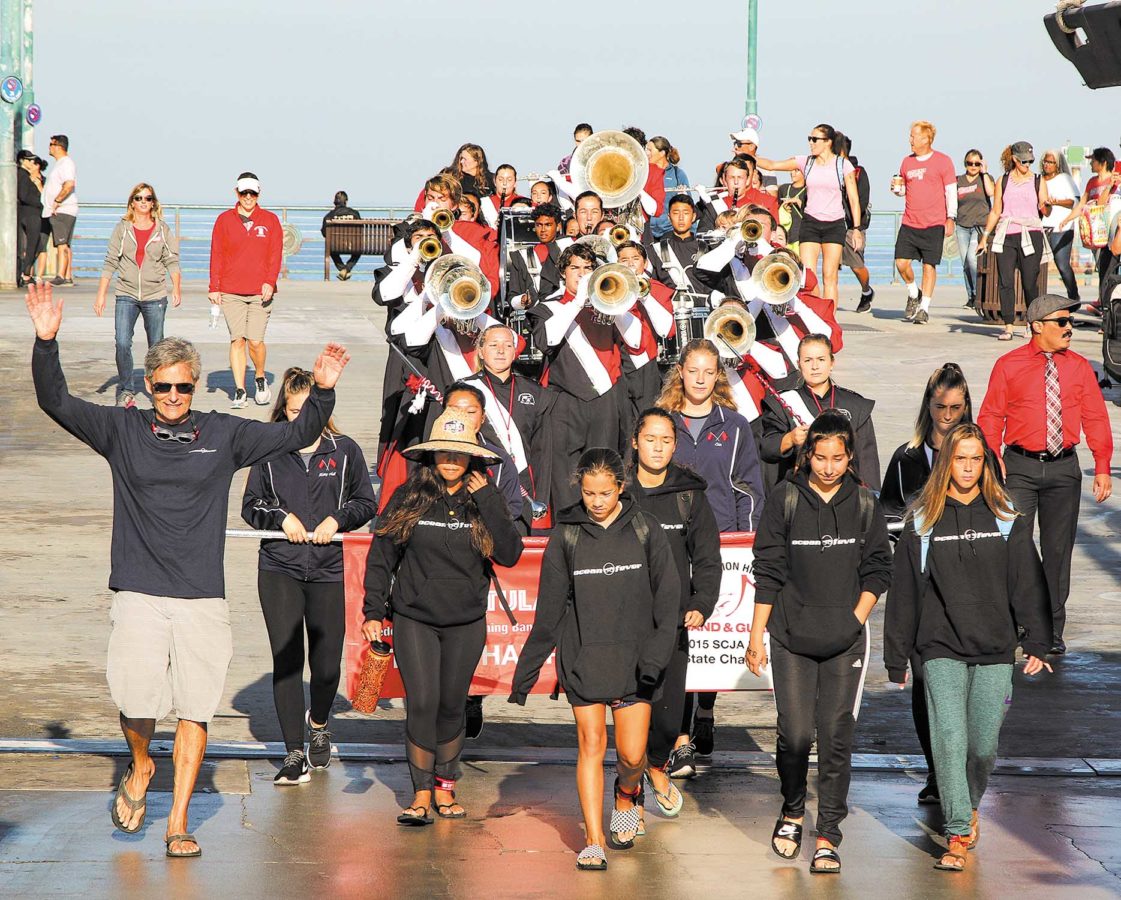 Redondo Beach Mayor Bill Brand leads the band and the swimmers from Seaside Lagoon, through the pier, to the start at Veterans Park. Photo Building a Brand

The event wouldn’t have taken place without the advocacy of Redondo Beach Mayor Bill Brand, who traveled to San Francisco to wow WOWSA with a video package detailing the beauty of Redondo and the South Bay. He was successful, drawing the group’s founder, Steve Munatones, and a handful of the organization’s executives to Redondo to close the deal with a test swim this Spring — and they loved it.

But on Saturday, Brand nearly missed his appointment; he was scheduled to lead off the second set in Ocean Fest’s Wave Makers Speakers Series at Seaside Lagoon. Brand, organizers promised, would talk about his plan to bring the Los Angeles 2028 Olympic 10K Marathon Swimming event to Redondo Beach, despite the repeated insistence of organizers that Long Beach would be the event’s home.

When he missed his 2 p.m. time slot, and organizers were left to vamp and work the crowd for half an hour, it was clear something was up. The day before, Brand missed an appearance at King Harbor Yacht Club, which was holding a welcome party for swimmers in town for the festivities — his wife, Dierdre, deftly filled in, sources in attendance said.

WOWSA Board Member Quinn Fitzgerald explained that Brand was recovering from chemotherapy treatment, and that two days earlier, he underwent the latest round in his battle against Stage Four lung cancer — a condition Brand only learned he had after it had spread to his brain.

Side-effects from radiation treatment on his back and lungs damaged his throat, making it difficult for him to eat solid food, much less speak.

But around 4:30 p.m., Brand appeared, receiving a toast from the gathered crowd after giving a short-form version of why he’s chasing the Olympics.

To Brand, the 1984 Olympics barely made a dent in the South Bay. The 2028 Olympics already seem much the same way. According to the Los Angeles’s 2028 Olympic organizing committee’s bid, the South Bay events themselves will stay east of the 110 Freeway, at Carson’s Dignity Health Sports Park (formerly known as StubHub Center).

One official map of proposed Olympic venues has a large, orange circle labeling Carson’s sports complex as the “South Bay Sports Park.” The Beach Cities, on the other hand, are buried under the map’s legend. It’s no surprise then that, despite Redondo’s overtures, LA28 holds firm that Long Beach Harbor will be the home for the marathon swim, brushing off the Beach Cities.

“Yeah, we’ll see,” Brand said, rousing the crowd. His idea is that, with WOWSA’s backing, Redondo’s bid as the home of open-water swimming will be too big to ignore.

The next day, Brand was back at Seaside Lagoon to head a parade that included the Redondo Union High School SeaHawk Marching Band.

He was still under the weather though — with only a few hours before he was scheduled to jump into the water for his own swim, he was unsure if he’d take the dive.

“I was literally throwing up this morning,” Brand said. “Then I thought, if Yuko can be swimming for 24 hours, I can drag my butt out here.”

Yuko Matsuzaki is a 57-year-old Japanese swimmer who set a Guinness World Record only hours before by swimming for 24 consecutive hours in an Endless Pool (essentially a treadmill for swimmers) that was set up in Seaside Lagoon.

A blog post by Munatones, posted at the WOWSA website, reported Matsuzaki’s hallucinations during her own marathon swim — she herself stated that she saw sea lions and dragons, and felt significant pain in her right shoulder with eight hours left. Matsuzaki finished her swim by shifting strokes from freestyle, to only left-handed, to alternating freestyle and breaststroke.

So Brand took the leap, bringing a secret weapon, 92-year-old Bob Freeman, a fourth-generation Redondo resident who swims in the ocean at least once a day. Brand invited Freeman the day before, paying for his entry into the 100-meter dash, and racing in with him from the chute.

After finishing the swim sprint, Brand high-fived Freeman and two accompanying swimmers, then doubled over to catch his breath. He felt like vomiting again into the sand, but held himself back, scoring yet another little victory that day. 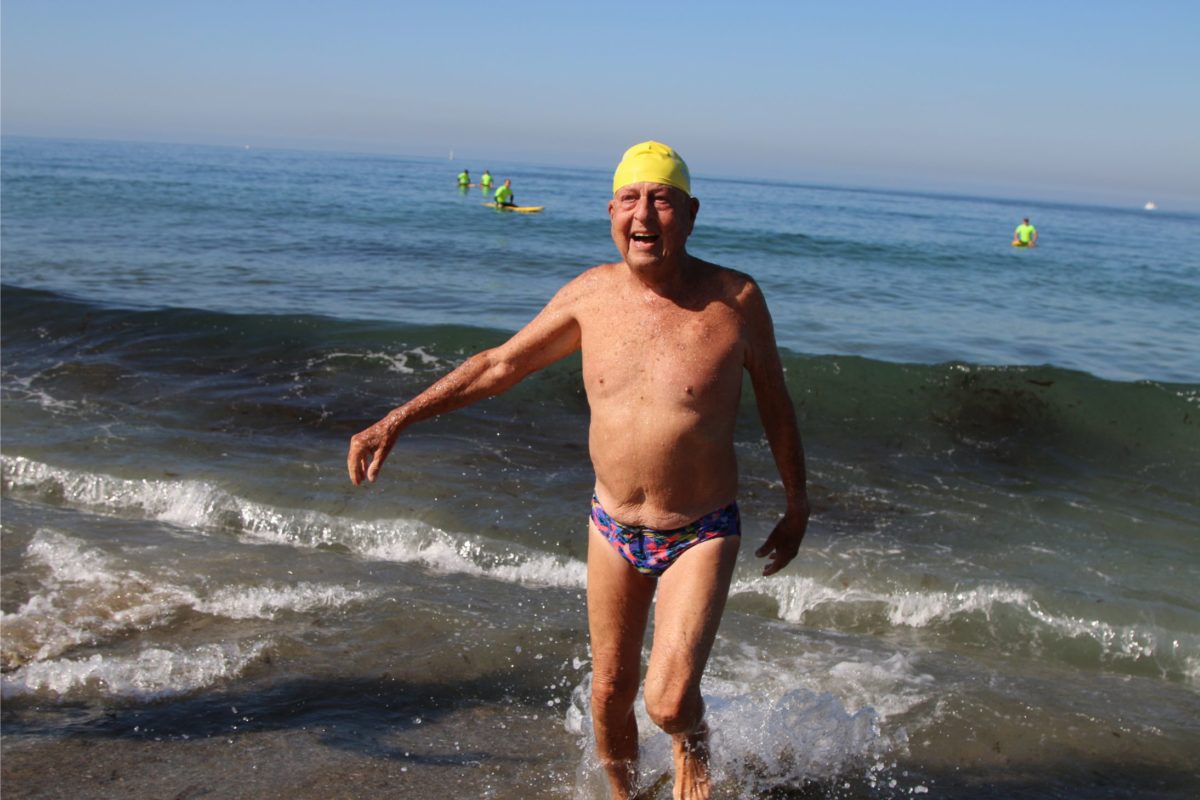 Bob Freeman, 92, of Redondo Beach, celebrates his finish in the 100-yard event. Freeman swims in the ocean every day. Photo

Days after the weekend-long event, promoter Quinn Fitzgerald is already looking forward to next year’s event. WOWSA and the City of Redondo Beach are tentatively engaged for Ocean Fest 2020.

“I think it was an eye-opening event,” Fitzgerald said. “I think a lot of people were amazed that there are these whole international communities of swimming that are different than just the pier-to-pier ocean swim…We basically had the leaders and luminaries of those communities here.”

The race, he said, was “blessed with phenomenal conditions” — clear skies, no fog, and water that was about 70 degrees and fairly flat. “And you can’t beat that view, looking at the Palos Verdes Peninsula,” Fitzgerald added.

Registration was solid too, according to Fitzgerald, who reported as many as 550 total entrants for the day’s races.

But his biggest concern is making the Ocean Fest into a world-renowned experience, purpose-built to introduce people to the community of swimmers.

“That’s why we had a live Guinness World Record attempt, Olympians, authors, and people who are true humanitarians,” Fitzgerald said. “And people love to be recognized for things — so many people are doing awesome things outside of swimming, and this is their fun social outlet.”

“We tried a lot of things, and aspects of all of them have potential,” Fitzgerald said.

After his race, Brand was exhausted, resting with his back to a wall on a platform behind the race emcees.

“I feel like I started a fire, and all of these other people threw gasoline on it,” he said, reflecting on the weekend and his hopes to attract the Olympics to Redondo. “I defy anyone to show me the swimmer who would rather be in Long Beach Harbor.”

Brand put his head back against the wall and looked back out toward the blue expanse. “The water was so beautiful…you could see the bottom, the fish, it was warm and clear. It couldn’t have been more beautiful.”