Riera's Deli updates a family tradition for the takeout era 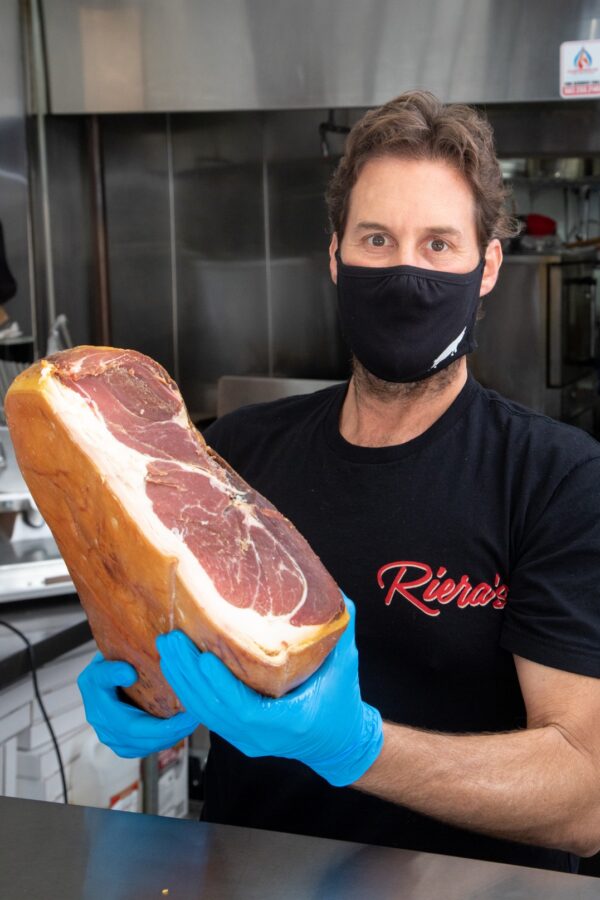 I first ran across the term “moveable feast” as the title of Ernest Hemmingway’s memoir, not knowing its original meaning in religious practice. It refers to a holiday with a changeable date but I had thought Hemingway was referring to a picnic, which I envisioned as involving sandwiches, potato salad, and because it’s Ernest, some kind of alcoholic beverage.

Picnics are currently the only dining out experience we can have, and I’ve been having a lot of them lately. This has been aided by take-out from Riera’s Place, a pizzeria and deli that opened last August. If that name sounds familiar, it should. Owner Nick Riera is the grandson of Millie Riera, whose restaurant was a local landmark for decades. Riera’s Place offers counter service rather than the swanky seafood place hers was, but some of the same items are on the menu here. I tried those and others at three meals and found much to like about the new operation.

Picnic number one was at the South Coast Botanic Gardens in PV, which has a very nice area with shaded tables by the parking lot. It’s only about 10 minutes from Riera’s, but seemed longer because the scent of the hot pastrami kept tempting me to pull over and have a bite. I had to try the pastrami because Riera’s makes their own, which few people do because it’s a lot of work. The meat has to be rubbed with spices, pickled, aged, and then slow-smoked. Most commercial suppliers rush this so the product is tasty but tough and rubbery compared to the real thing. Cheap pastrami must be sliced very thin so buyers won’t notice how tough it is. Riera’s has the proper tenderness, though it is unusually mild. Traditional pastrami often has a very spicy pepper and paprika crust, and though those flavors were present they were in the background here. It reminded me of a cross between corn beef and pastrami, which is no bad thing.

My wife doesn’t like pastrami and ordered a Redondo Special, grilled chicken breast with lettuce, tomato, mayo, and provolone and a dash of marinara sauce. This is a classic deli sandwich with the exception of the marinara sauce, which is a good addition in terms of flavor but makes it a bit soggy. I would recommend you ask for the marinara on the side so you can add it at the last moment, and that goes for the mustard with the pastrami, too. Fries or chips are available and on this visit we got chips because those travel better. We also got a cup of Riera’s homemade chicken soup, which was just the kind of rich, warming concoction you hope for when you order chicken soup. A lunch like this will fortify you for walking the miles of trails in the Botanical Garden, which is a great way to spend an afternoon in the South Bay.

The second picnic was at El Retiro Park, which is almost across the street from Riera’s but hidden by a row of houses. This was so close that I ordered fries alongside a crabcake sub sandwich. Both survived the short trip, hot and crisp. The crabcake is different from the East Coast classic with its paprika-heavy shot of Old Bay seasoning. Instead the flavors that weren’t crab were mildly herbal and went nicely with a coleslaw that tasted of celery seed and a dash of agreeably, vinegary tartar sauce. The fries were just average but were hot and crisp, and a nice counterpart to the sandwich. I recommend that sandwich and a visit to El Retirio, too, because it’s a tranquil place to enjoy lunch. At just about any time it is well stocked with children, parents, and dogs, though not with tables – there are benches or you can sit on a ground cover and get close to nature. 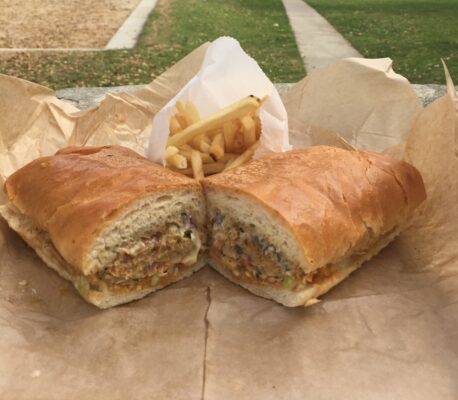 The third meal from Riera’s was at home. We were going to dine on the patio but for a cool and foggy evening. I like repeating themes in my reviews, but not enough to let dew settle on my pizza, so we dined indoors. This started with poke and a cobb salad, followed by a quarter-pan sausage “deli” pizza and a slice of their grotto pizza. Riera’s makes gigantic rectangular pizzas and subdivides them to order, so a quarter pan pizza is ample for two people. The deli pizza is your standard medium crust pizza, the grotto a Sicilian-style slow risen sourdough pizza with a much lighter crust. We found the grotto style pizza far superior in flavor and texture, the tomato sauce lighter and fruitier, the simple topping of mozzarella and basil fine by itself. There are various add-ins such as pepperoni and meatballs,  but give the unadorned version a try first to savor the simplicity.

The accompanying cobb salad was the classic iceberg lettuce topped with egg, chicken, bacon, and the like, but elevated by a homemade blue cheese dressing that was rich and flavorful without being heavily sharp. If you like fuller flavors you might try the poke, which has a tang from toasted sesame oil and a cumulative heat thanks to some red pepper and ginger. It’s not advertised as a spicy poke, but at least on the day we were there, the kick was noticeable. I like my poke zippy, my wife doesn’t, so after a few bites I had that to myself. 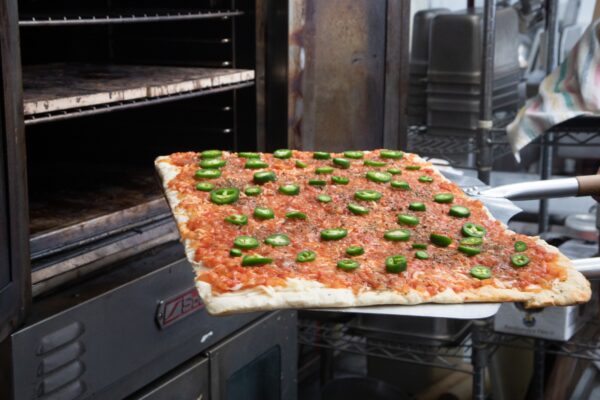 A Riera’s “Grotto” pizza on its way into the oven. Photo by JP Cordero

On each trip to Riera I have looked longingly at the clam chowder in the deli case but didn’t get it because it is sold only by the quart. I asked Nick why he doesn’t serve it ready to eat and he explained that keeping the clam chowder on the warmer causes it to become condensed and shifts the texture to gluey, so they don’t do it. This makes sense and shows a commendable desire to have the food enjoyed at its peak.

Riera’s Place is very good and has obviously caught on with locals, since there was a stream of take out orders in preparation each time I’ve visited. The community knows a gem when they see it, and it’s their portable feast for the local park, patio, or family table.