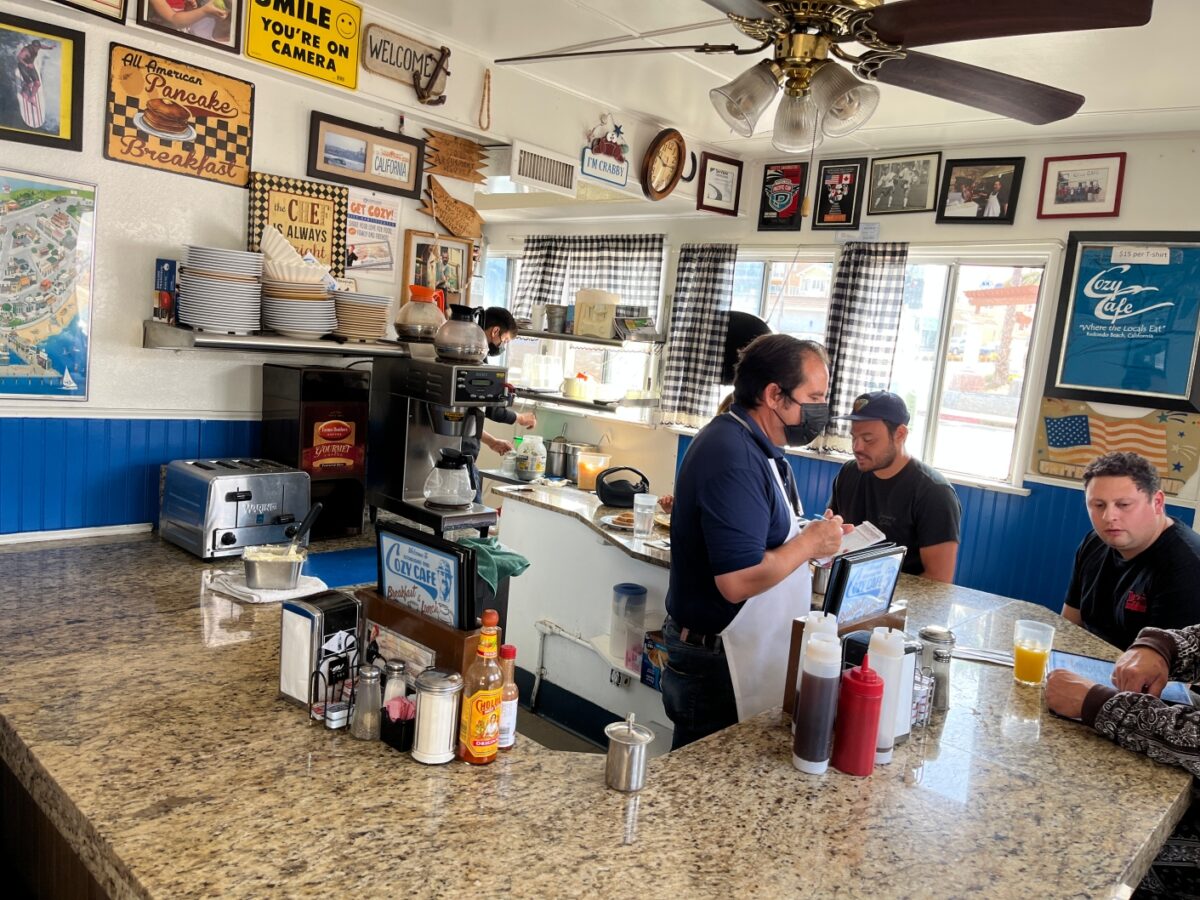 The Cozy Cafe has the style of a bygone era of roadside diners. Photos by Richard Foss

The little building just south of Torrance Boulevard on PCH isn’t beautiful when it comes to proportions or decoration. From the outside it has all the charm of a shoebox, a yellow stucco square with olive green trim, unembellished but for a sign proclaiming it the Cozy Café. The building has probably been there for over a 100 years (none of the employees seems to know), and is the least-changed commercial structure in a wide radius. To architectural preservationists it’s a delight.

Go inside and you encounter an atmosphere of welcome and, yes, coziness. This was a barbershop before George Anagostu remodeled it into a café in 1980. The counter is modern, granite rather than the formica or wood, but otherwise the space is reminiscent of a diner from the 1940s. A clutter of jokey signs, photos of past customers, some in black-and-white, and other bric-a-brac make it look like a movie set for a film involving a road trip in a Studebaker. The staff seem to know most of the people who dine at the counter, greeting them by name as they bustle back-and-forth to the tiny kitchen around the corner.

Only nine seats are around that counter, but there are patios both at the side of the restaurant and in the rear. The one behind the restaurant has the most space and is quietest, and while it lacks the charm of the interior dining space it’s quieter and offers more elbow room. Sit down and you’ll be handed a menu, offered coffee if it’s breakfast time, and generally made to feel at home.

The menu is noteworthy mainly for amusing typographical errors, and is otherwise a straightforward list of American classics with a few Greek items. It’s as unpretentious as the décor, but promises some homemade items like the corned beef hash and the chili. I almost always order corned beef hash when it is made in the house, so I knew what I was going to have as soon as I saw that on the breakfast menu. Unfortunately, as soon as it arrived, I recognized it as canned, with the uniform consistency of chopped beef and potato. When I asked our server, he confessed that he hadn’t noticed that the menu said it was “fresh made.” Perhaps it was in decades past and they forgot to change the menu when they switched to commercial stuff, but it was a letdown. The poached eggs and home fries that came with it were fine, but I won’t order the hash again.

My wife picked a classic American breakfast of French toast, eggs, and bacon, and it was competently made, the bread a thick cut that fried up fluffy and light, the egg the requested over medium. The coffee was standard American drip with no fancy drinks, which fit the setting. 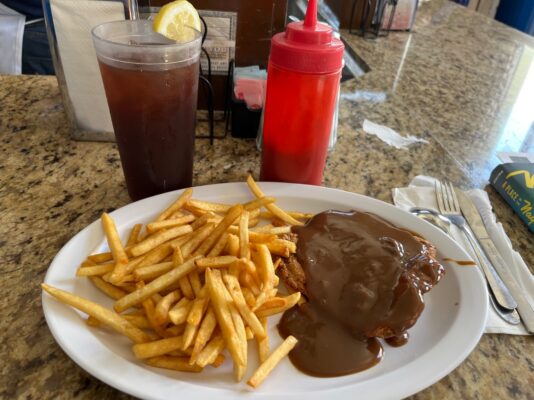 We returned for lunch because I wanted to try the item listed as “our house chili.” I find good chili delightful and am always looking for the best in the South Bay, but before ordering I asked if that came from a can too. It did, so I got something I hadn’t had in at least 10 years – chicken fried steak. In Texas this is an actual thin steak that is breaded and fried, probably an item borrowed from German immigrants who made schnitzels with the new world addition of white or brown gravy. The Cozy Café’s version is a breaded burger, served with brown gravy and either fries or salad on the side. As long as I was clogging my arteries with the chicken fried steak, I decided that I might as well go the whole way and get fries with it. They were crisp, the “steak” enjoyable as a novelty, but I might not eat another one for another decade.

The best item of either trip was the Greek chicken salad, a standard green salad tossed with vinegar, oil, feta cheese, and oregano, topped with sliced grilled chicken. The oregano’s herbal tang is a nice touch, and I’m going to start adding fresh oregano to my salads at home. Any meal where I find a technique that I want to copy later is a good meal, so this one was a success.

The Cozy Café isn’t a culinary destination, but a place you go because the service is friendly, the environment comfortable, and the food okay.