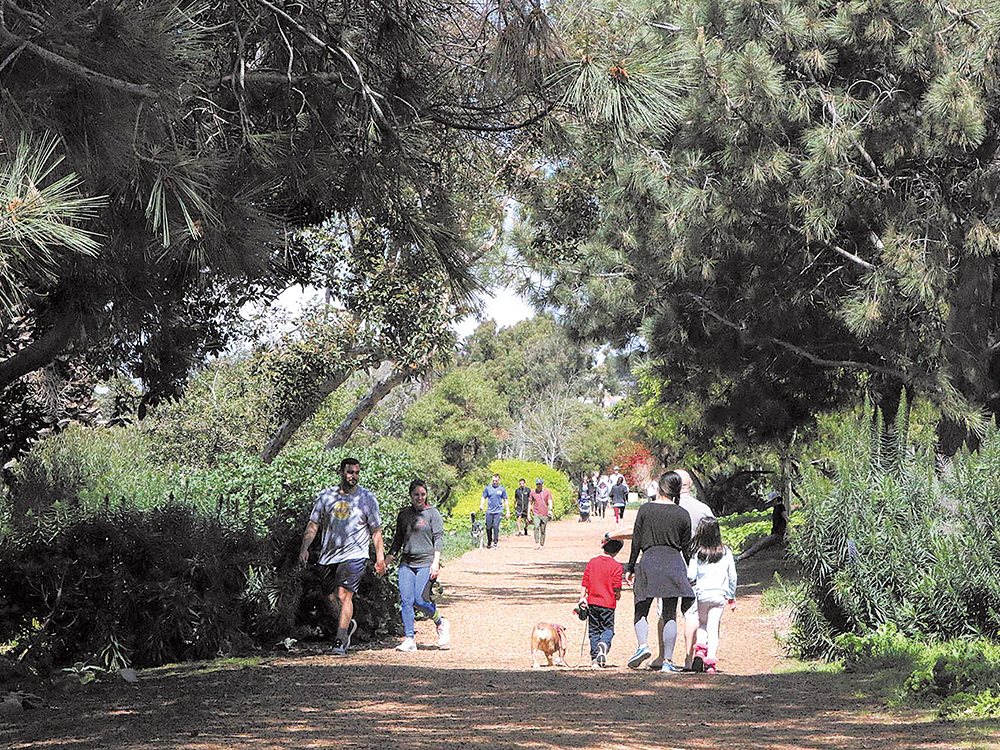 Studying installment of a surface along Hermosa Beach’s Greenbelt to make it more accessible for people in wheelchair has generated heated debate. Photo by Kevin Cody

A war of words erupted Tuesday as Hermosa Beach City Council members tangled with dozens of residents during a discussion of the future of the Greenbelt, called by some “the crown jewel of the city.”

At issue was the funding of a study that officials hope will “determine the feasibility of installing an accessible surface path on the Greenbelt to provide a firm, natural looking path that increases accessibility for the disabled and boosts accessibility for all,” according to a staff report.

Diversity of opinion was articulated early in the debate by residents Kent Allen and Raymond Jackson.

“We’ve beaten this issue to death, and it is clear that the vast majority of the people in this town simply don’t want it,” said Allen.

“The Greenbelt is considered the crown jewel of the beach cities and access shouldn’t be limited. There is no harm in increasing accessibility to all. So let’s do the right thing,” Jackson countered.

More than 35 residents wrote to tell council members they opposed a “hardened surface” that might encourage more bicycles and other wheeled vehicles to disrupt pedestrian use.

Even before debate started, Mayor Justin Massey lectured those who had written letters to the council opposing the study and possible changes in the Greenbelt surface.

“There is a fundamental misrepresentation of what is before the council, and I urge people to think critically about the information you are getting out there,” Massey said. “This is simply an assessment of potential options. This is not a pilot program.”

City Manager Suja Lowenthal added, “The item before us does not have anything to do with paving. That is a misinterpretation. We want to make sure that these areas are accessible for people. For us to look at access is very much what Hermosa Beach is all about. I applaud the council for allowing us to take a look at this. And I encourage all to have an open mind.”

The city will hire a consultant with expertise in requirements of the Americans with Disabilities Act (ADA) to “study what might be possible,” Lowenthal added.

Caroline Petty, a former council member, called in on the Zoom meeting to disagree: “I want to address Suja’s comments. Not every single person gets what they want,” said Petty. “It is an outrage you won’t let this go. The community is vehemently against this. It’s not an ADA issue. Nothing is limiting access to the Greenbelt. The community is not being listened to. Your intention is to drag this out as long as possible until you wear everyone out, and leave people knowing their opinion does not matter. I think you are misinformed, not us.”

Gila Katz said she was “disappointed” at Petty’s comment. “We need accessibility for people who can’t walk as easily as others,” she said. “The Greenbelt is not just for people who can easily use it. This is what makes the city strong and beautiful. This dissent is sad.”

Moira Nelson told the council, “I feel strongly that the Greenbelt is one of the city’s treasures, and it should be shared with everyone. I use it, and I’m usually alone, and I’d be happy to be joined by an army of people in wheelchairs. This is something that belongs to all of us.”

Council member Mary Campbell said she was “shocked by the lack of empathy I’ve seen tonight.” Then she expressed her support for the study proposal, which subsequently passed on a 4-0 vote.

— Approved a contract amendment with Willdan Engineering for additional funds for COVID-19 code enforcement, not to exceed $50,000, and extending through the calendar year. The contract can be terminated by the city at any time if pandemic restrictions are lifted sooner.

Police officials noted there have been 701 citations issued by enforcement officers, who contact up to 150 people daily regarding violations. Of those cited, 88 are contesting.

Massey noted that officials in El Segundo had been asked to mutually cooperate on the letter production, but “they wouldn’t share with us for reasons I don’t know.”

The revised letter will be reviewed by council members before it is sent.

— Agreed with council member Michael Detoy to place on a future agenda a discussion that might lead to lobbying Los Angeles County officials to finally allow organized volleyball and other group outdoor sporting activities. Detoy said he has been told that restrictions now limiting such activity “might be lifted on March 17,” St. Patrick’s Day. ER