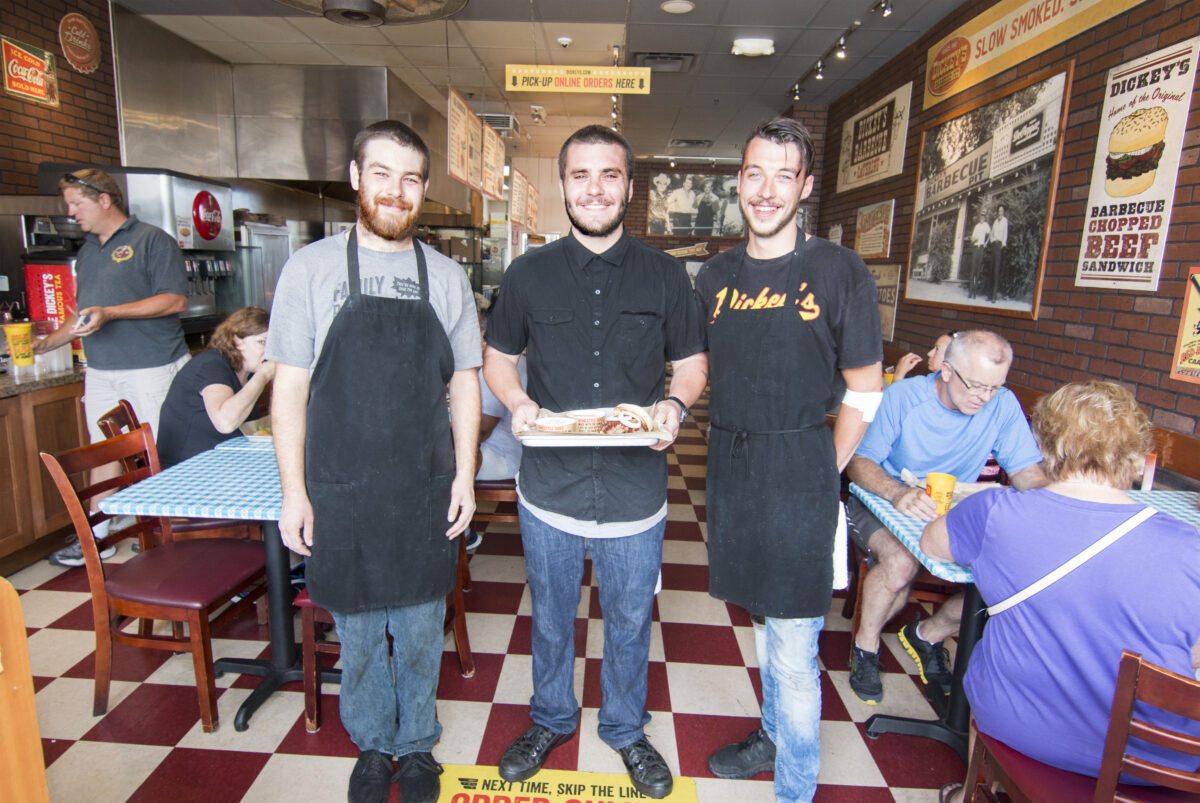 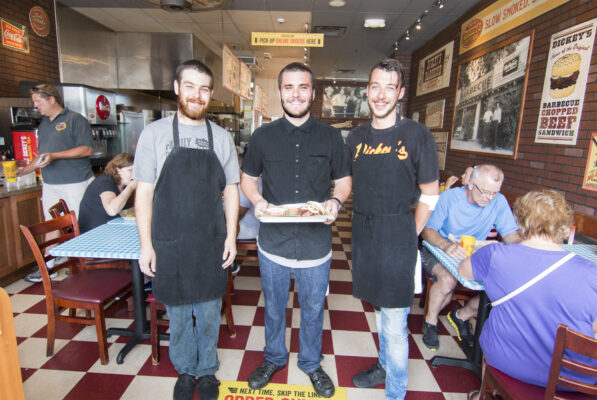 Once a term gets embedded in language, it’s pretty hard to dynamite it out. A case in point – we still speak of dialing a phone call, even though the last rotary phones were manufactured in 1985. Children who are shown a phone with an actual dial have no idea what to do with it unless they’ve watched old movies, but the term sticks.

Another term that has lost meaning is pit barbecue. It’s not entirely an anachronism, because there are still places where wood is burned in an actual hole in the ground and meat placed over the coals. It’s one of the most inefficient cooking methods on earth, and the local Air Quality Management District would have a short and pointed conversation with anyone who proposed a new eatery using the technique. New technologies have evolved to obtain the same effect while burning a fraction of the fuel. Instead of that tasty smoke blowing away on the breeze, it’s circulated so it penetrates the meat – and the pitmaster gets pinpoint temperature control in the bargain. 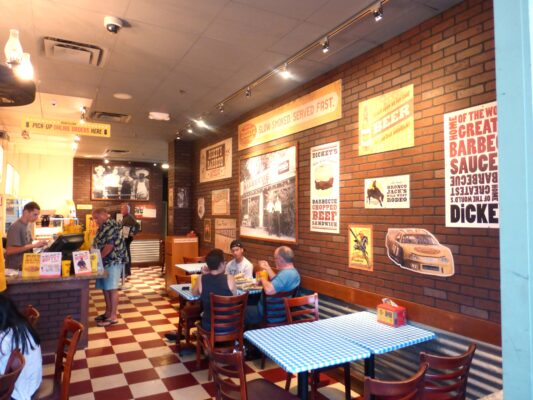 More of the interior of Dickey’s. Photo .

At Dickey’s Barbecue Pit in Redondo the smoker is hidden in a metal cabinet behind the counter, but you can still get a whiff of hickory on the breeze as you cross the shopping center parking lot. The corner space near Wholefoods looks as much like a Southern roadhouse as checkered plastic tablecloths, replica road signs, and fake brick can achieve, but it’s a cheerful environment and most seats are occupied at any given lunch or dinner hour.

The pork ribs and brisket are the stars here – both benefit from a spice rub that flavors the meat deeply. The ribs have the crisp “bark” on the exterior and are not quite fall-off-the-bone tender, which is just the way they should be. Fall-off-the-bone meat is usually mushy, and though there have been some instances where ribs from the small end of the rack have been a bit dry, things are usually right on the money. The brisket has that bark and smokiness too, but on a recent visit the pulled pork was moist and tender but hadn’t taken up much smoke or spice. It was very juicy roast pork, but without the concentrated flavor that smoking can provide. I’m not a fan of Dickey’s chicken, as they use boneless breast meat that has little flavor. Skin-on whole chicken might be great coming out of that smoker, but when I tried their breast meat the principal flavor was the Italian dressing it had been marinated in.

Dickey’s also offers ham, turkey breast, cheddar-jalapeno sausage, and their version of Polish sausage made with a mix of beef and pork. I have tried the two sausages, and the cheddar-japlapeno sausage is exactly the greasy guilty pleasure you’d expect, oozing cheese and setting just a bit of a fire on the tongue. The Polish is a little light on the garlic and pepper compared to traditional kielbasa, but smokes surprisingly well.

Three sauces are offered – mild, spicy, and a sweet and slightly hot sauce. The mild is too mild for me, and even if you usually like a bland sauce you might mix it with one of the hotter versions to pep it up.

With your hunks of protein you can get a variety of sides, of which the best is fried okra. The okra is made to order in a spiced cornmeal batter and really tastes like the South – it’s the item I can’t resist when I’m dining in. (Alas, fried okra doesn’t travel well.) Their waffle-cut fries and thin onion strings are also made to order and are worth getting, if you’re going to devour them immediately.

If you’re ordering to go and things will sit a while, the green beans with bacon would be my first choice, with the “potato casserole,” a mix of MASHED potatoes with sour cream, cheese, and scallions, the starch of choice. The barbecue beans and cole slaw are decent but unexceptional, though I’d get the slaw with the pulled pork – the tartness would go well with the rich meat (there’s a reasonfor that tradition). I’m not a fan of Dickey’s mac and cheese because the pasta was overcooked and the sauce a bit gummy both times I’ve tried it, but some people like it that way. As the old Southern proverb goes, “De gustibus non disputandum.” (That’s Southern Italy, not the Southern US, but the sentiment that “You can’t argue about taste” still applies.) 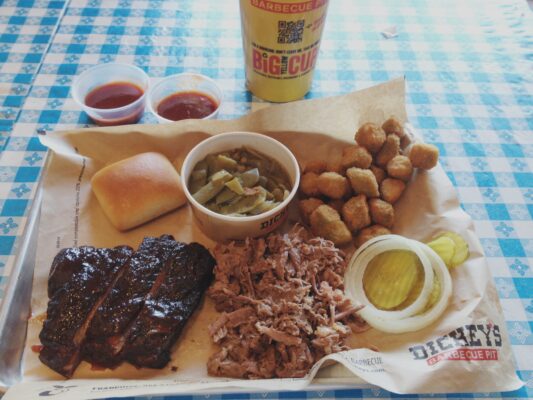 Salads are offered, a chicken Caesar, standard dinner salad, and that same green salad covered with brisket, cheese, and fried onions. I haven’t tried any of them, but I have had one of the stuffed baked potatoes, a mammoth spud stuffed with meat, cheese, onions, and a dab of barbecue sauce. This will fill at least one person to capacity, and if you like baked potatoes it’s a good choice.

Soft serve ice cream cones are offered free for all diners, which particularly delights the younger set, and they actually make a sweet but decent apple pie. What delights the adults is that the bill isn’t high for barbecue – a pound of meat with two sides and rolls, enough for two to three people, costs only $28, and individual barbecue plates start at nine bucks. Dickey’s is a good choice for barbecue locally, and you’d never know from the taste of the ribs that they haven’t been in a real pit somewhere in Texas.