Restaurants get whiplash, pivot to take-out and delivery

How local eateries are dealing with the ban on dining in 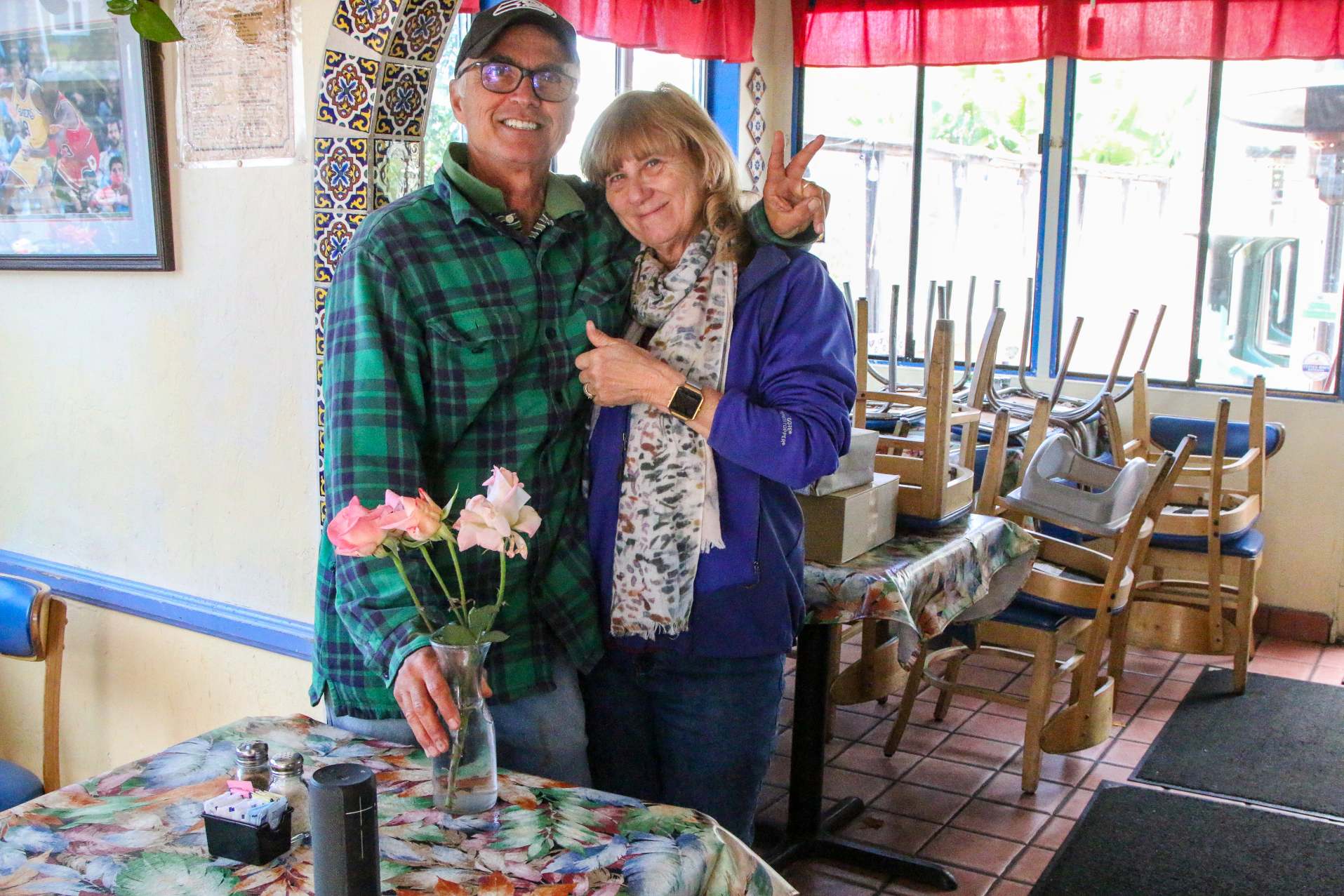 La Playita owners Harold and Susan Cohen have stacked their chairs on their tables, but are still offering take-out at their downtown Hermosa Beach restaurant. Photo by Kevin Cody

Things have been moving so fast recently that it might be good to start with just one fact for perspective. One week ago, you had well over two hundred options for dining out around the Beach Cities. Today you have none.

The change happened so quickly that even the most agile restaurant owners had trouble coping. I visited one place where the manager proudly showed off the fact that they were setting only every other table so that diners wouldn’t be close to each other. Less than two hours later the order came from the county that ended all dining in, negating their efforts. Another restaurateur sent out emails to all of his regular clients advertising 50% off everything on the menu through this coming weekend. This worked too well, and that restaurant sold out of almost everything within a few hours and had to suspend business. At least one restaurant had scheduled a big advertising campaign with an email service and forgot to pull it, so that a promotion for a wine event went out the day after it had to be canceled. You can’t blame any of these people for errors or misjudgment, because they were reacting to something that had been inconceivable almost up to the moment it happened.

Everyone in the restaurant industry now faces a grim choice: close entirely and hope they have enough cash in the bank to last until they can resume service, or shift to a takeout and delivery only model. Some places can’t make the transition, because the appeal of their restaurant is rooted in the environment and service experience or they serve a cuisine that doesn’t travel well. Restaurants whose reputations are based on an inventive and constantly changing menu are going to be hardest hit, because they depend on a high level of customer interaction with servers. The Strand House announced their closure almost immediately after the order banning dining in arrived, and owner Michael Zislis remarked that “It’s not the kind of place that people go to for take out.” His new Brews Hall at Del Amo and the eateries in the Shade Hotels have stayed open, the latter because the hotels are offering packages that include three meals a day, laundry service, and free delivery of prescriptions and items from local pharmacies. It’s an innovative strategy, but one that few competitors have the facilities to match.

Many restaurants have stayed open even though the owners know they will probably lose money, because they want to keep their staff employed. They value keeping their team together and are willing to bet that, in the long-term, customers will recognize and appreciate it. Some are making up for the lack of table service by offering sharply reduced prices – in the case of Spumoni in Hermosa, 50% off. The Arthur J is not only offering discounts from their regular menu, but is also selling their high quality meats to go, in effect becoming the South Bay’s newest butcher shop. Like many others they’re taking advantage of a change in state law that allows them to sell their wines to go, though only by the bottle rather than by the drink.

Others are coping by changing their menus to offer modestly priced family meals. Barsha in Hermosa has switched from Tunisian specialties to comfort food family dinners like turkey lasagna, chicken pot pie, and a Sunday fried chicken supper. Not everyone has made a change that is quite that drastic, but many have simplified their menus in order to make a high volume of items available from kitchens that usually operate at a very different pace. Some are actually expanding their offerings: Gabi James is offering their regular menu as well as four different family value menus each day. At the other end of the spectrum, pizzerias and burger joints have no such adjustment to deal with, and probably have few changes to make except for ordering a lot more to go boxes.

So what do you do if you can’t cook at above a rudimentary level, are too tired to consider the prospect of making dinner yourself, or you want to help keep a favorite place in business? Here are a few tips:

Looking ahead, it is impossible to ignore that our entire local restaurant industry will be facing hard times, particularly those with high rents in downtown locations. Places that historically made a substantial portion of their profit from tap beers and cocktails are in trouble because neither one can be sold to go. Bars that offered mediocre food to soak up alcohol are at a considerable disadvantage, and some will undoubtedly go under.

The ones in deepest trouble are the restaurants that had planned to open within the next few weeks, because they have no income stream now and will have no established clientele whenever everyone is allowed to open. The new Palmilla in Manhattan Beach, which already has a strong local brand, is one of several that will delay their debut. Since several other projects are transplants with no reputation here, they will face the highest burden when it comes to trying to define themselves and find a clientele.  I imagine that a lot of landlords are getting calls right now about rent reductions, and a lot of investors who were counting on a quick return are realizing that they won’t get it.

This situation is changing and will continue to change, and like the other people at this publication I will do my best to let you know what’s going on. We have a webpage  with information about which places are open and what they’re doing, and we will try to keep that up-to-date even as things change.

There are a lot of creative people in the local food service industry, and some of them will undoubtedly come up with ideas for serving great meals even though their staff won’t be there to refill the water glasses and take away the dishes. If you want to let me know about some of the things they’re doing, my email is richard@richardfoss.com.