Riding along with Fido… and T-Rex 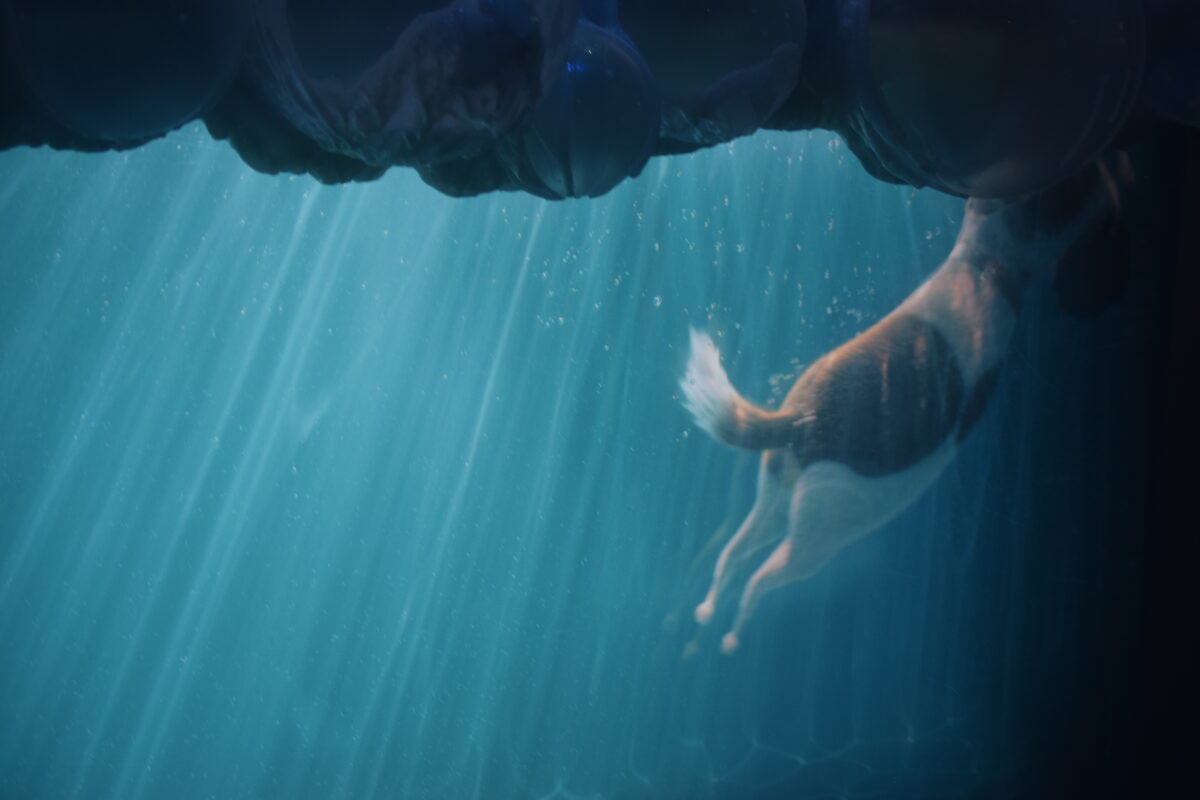 He fell into the tank. Will this pooch be eaten by the Mosasaurus? Photo by Bondo Wyszpolski

He fell into the tank. Will this pooch be eaten by the Mosasaurus? Photo by Bondo Wyszpolski

Of dinosaurs and dogs

Let’s start with the one where you won’t get drenched, and that would be “The Secret Life of Pets: Off the Leash!” which is the newest attraction at Universal, and one that’s fairly charming all in all. Besides, it’s one thing for a small pet to be “off the leash” and yet another for an angry dinosaur to be untethered. But one paw or claw at a time.

“The Secret Life of Pets” is based on two animated films which passed under my radar but maybe not yours if you’re 10 or 12. It’s along the lines of an old-fashioned dark ride where you board a vehicle and are whisked about from one setting to another. This one’s best suited for pre-teens and answers the ages-old question, “What are your pets doing when you’re not at home?” If you think the answer is sleeping, mating, and smelling up the catbox, you’re wrong, at least this time. They’re getting into all sorts of mischief, but it’s harmless: no one gets an ear or a tail bitten off. 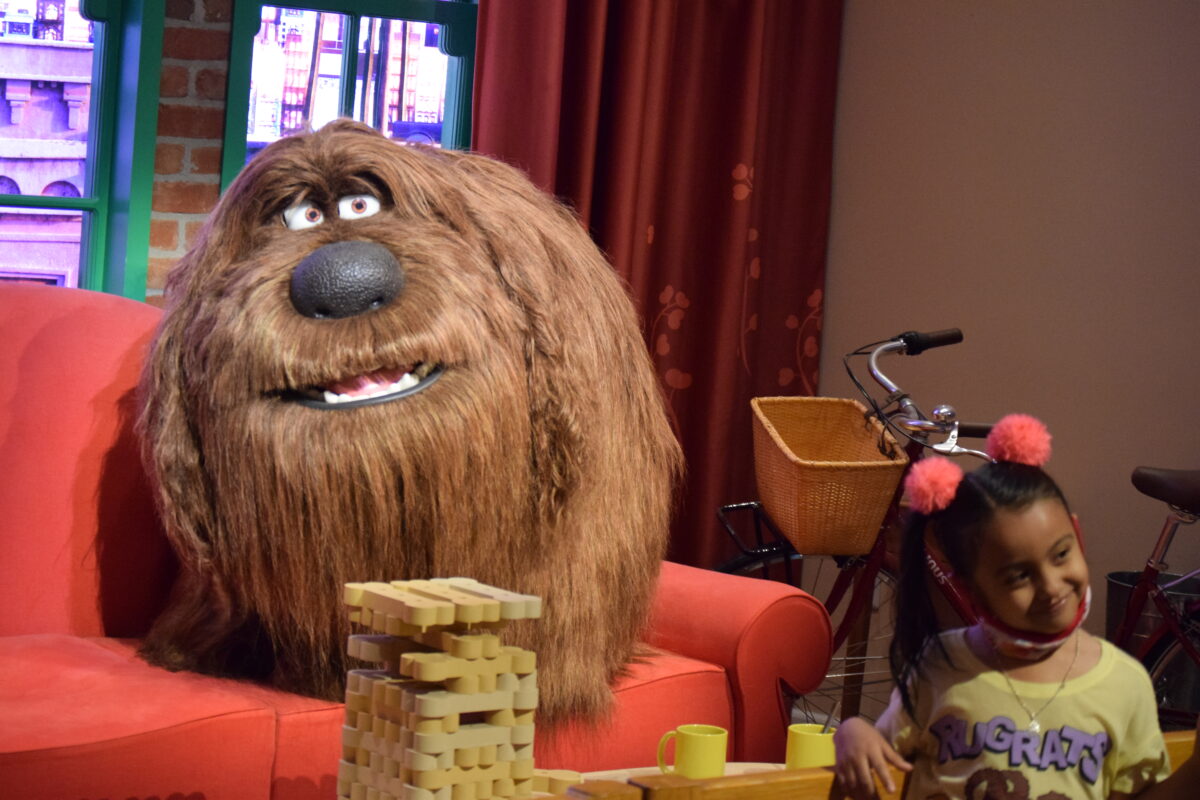 Duke, with guest, inside The Secret Life of Pets attraction. Photo by Bondo Wyszpolski

The story begins in Katie’s New York City apartment, and visitors actually get to walk through parts of it before hopping onto the ride itself. In fact, those who have an express pass actually miss part of this experience. In this way we meet some of the characters, too: Max, Snowball, Gidget, Chloe, and Duke. Louis C.K. voiced Max in the first film, but landed in the #metoo dog pound before he could reprise his role for the sequel. The attraction itself is filled with gentle mayhem and one may need to go through it again in order to catch many of the shenanigans.

The Jurassic Park film franchise has provided a built-in audience for Jurassic World: The Ride, this being a revamping of Jurassic Park: The Ride. This time it’s all about the indomitable Indominus Rex, who is also off the leash, as I’ve said, but in a more serious way. Perhaps it’s my age, but I prefer rides that approximate exquisite novels, with an infusion of mood and atmosphere, and off the top of my head I think of Disneyland’s “Pirates of the Caribbean.” There’s an impressive bit of that here as our boat glides through what seems to be a large aquarium filled with sharks… and the prehistoric Mosasaurus that seems as long as a city block. We see it swimming with deadly grace, snatching up a shark in one bite, and moments later banging the glass with its head. Cracks appear, water splashes out (on us, of course), but fortunately we elude disaster. This is all rather sublime, and in my opinion the best part of the attraction. Too bad we can’t opt to backtrack and experience it again without having to redo the entire ride. 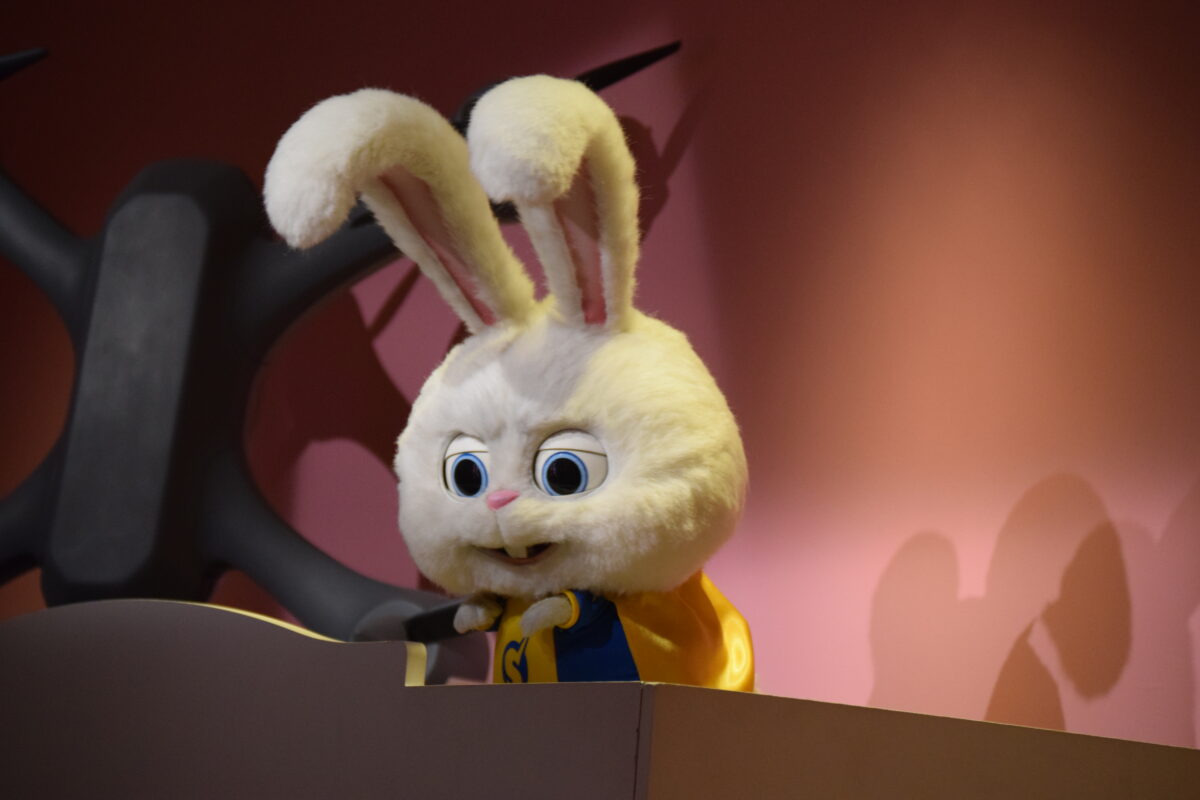 Snowball, inside The Secret Life of Pets attraction. Photo by Bondo Wyszpolski

A brief but pleasant interlude gradually turns ominous, with signs that something has gone wrong. Yes, the big girl has escaped, and she’s not leaving the scene until she’s had lunch. “Listen to me,” says Chris Pratt, one of the film stars, “do not panic!” This, as the boat is being tugged up a steep incline, and perhaps where one’s apprehension is at full tilt. You don’t even have to be on the ride to know that there’s a big drop ahead and a soaking for almost everyone aboard.

Maybe I’ve experienced too many rides like this over the years, but the final plunge and splashdown, and the drenching that follows, has become an annoying cliché. What if, instead, our boat had turned into a hovercraft at the last moment, risen above the outstretched jaws of the Numero Uno Predator, and then given us a nice view of Isla Nublar?

So, the bottom line, the ride is a bit mediocre despite that enthralling beginning with the Mosasarus, which in itself, however, is worth going on this adventure. 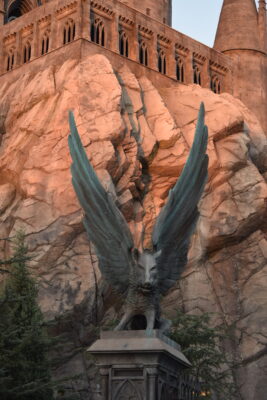 Universal Studios: The Wizarding World of Harry Potter, as dusk rolls in. Photo by Bondo Wyszpolski

I queried several people on this, and everyone agrees that the best ride at Universal Studios is still the tram tour. I suspect that The Wizarding World of Harry Potter comes next. For me, the Transformers attraction is towards the bottom, because being shaken back and forth for five minutes lost its appeal when I was maybe 15.

A day at Universal Studios did have me thinking about other California theme parks. I’d even written a couple of articles on them for the L.A. Times way back when. For a while, my preferences were for the seedier parks, the long-gone Long Beach Pike, for example, but I have been visiting Knott’s Berry Farm and Disneyland almost since their inception. As for the latter, I’m sure Walt would never have welcomed aboard the Star Wars and Marvel franchises. Would he really have wanted attractions where we’re sent into distant galaxies to blow up things and kill other beings? Meanwhile, on the watered-down Jungle Cruise, African natives have been replaced with chimpanzees, but the terrible jokes of the boats’ skippers live on in perpetuity.

As for Universal Studios, I noticed that out in the open the wearing of masks was about 50-50, with the park urging the unvaccinated or partially vaccinated to wear masks at all times; and for everyone, regardless of their vaccination status, to wear a mask when indoors. A bit of a hassle, sure, but the park does seem less crowded (fewer travelers from out of state or abroad) than it normally is at this time of the year. So weigh your options—and enjoy the rides. ER