Ritter was old school, all in paddleboarder 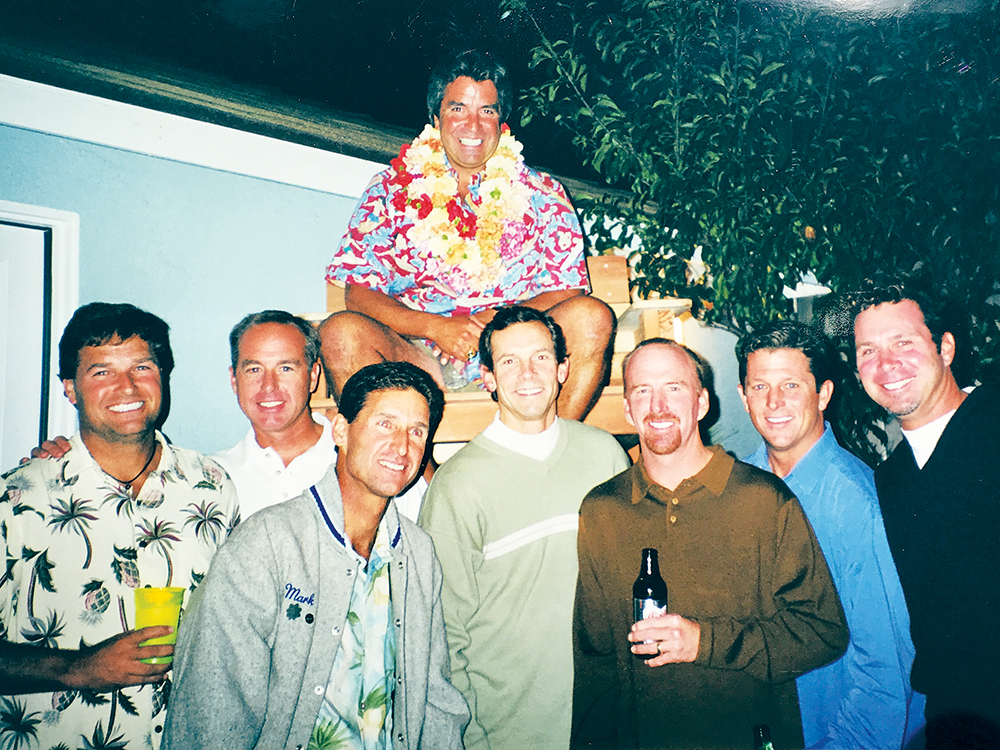 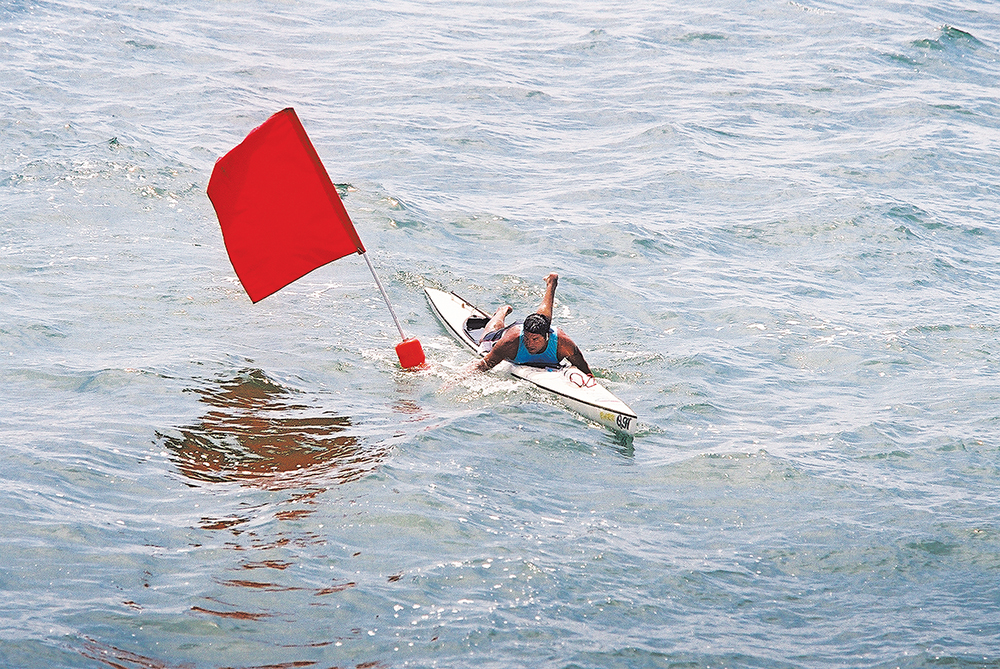 Tim Ritter passes the finishing buoy at the Manhattan Beach pier during the 2002 Catalina Classic. Photo by Ray Vidal 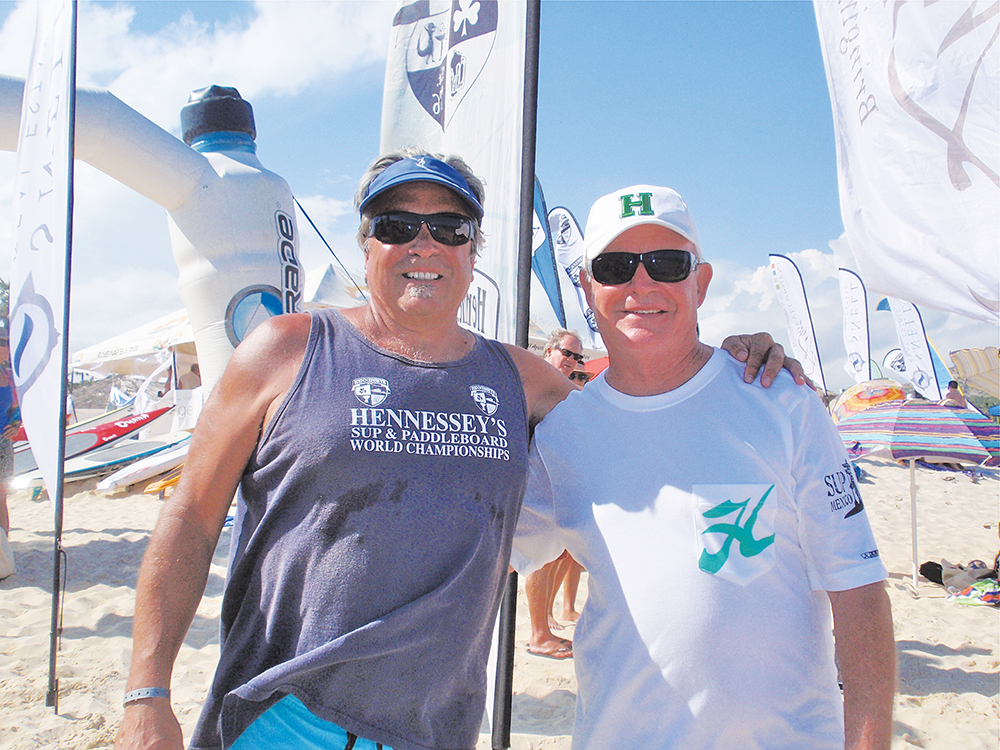 During the Catalina Classic Paddleboard Race pre race meeting last month, at Buffalo Park on Catalina Island, race director Buddy Bohn asked for a moment of silence in memory of Tim Ritter. Ritter competed in the 32-mile race from Catalina to Manhattan Beach nine times. But as Bohn and others have noted since his death last month, Ritter’s most important paddleboarding  role wasn’t paddling. It was what he did for other paddlers.

“Tim was the guy who put traditional prone paddleboard racing on the world stage,” Australian lifeguard and champion paddler Mick Di Betta said. “In running races with travel budgets and prize money, he gave me and many others the opportunity to see the world and meet some of the most important people in our lives. I’m sure without Tim’s hard work and passion for the sport we would not have races now, like Molokai2Oahu.”

“Before Tim, we had two South Bay races — The Rock 2 Rock at the start of summer and the Catalina Classic at the end of summer. When Tim founded the Hennessey Paddleboard Series, we had races up and down the California Coast, in Mexico, Hawaii and in Australia,” Levy said.

“That was the Golden Era of paddleboard racing. Tim set the standard for all the races that followed,” former Catalina Classic board member Scott Rusher said.

“I’ll never forget the advice he gave me when I started paddling,” Rusher added. “Paddle as hard as conditions allow. All out, the whole way.”

The former Mira Costa High School football player, wrestler and shot putter was an old school, gut it out athlete.

While other paddlers consumed Gu, and sipped electrolytes from their water bottles during races, Ritter ate chocolate doughnut holes, recalled Jim Cowherd, who escorted Ritter on most of his Catalina Classic races.

“One year at the R10 Buoy, I played a Sammy Davis Jr. CD of the “Candyman” to get him fired up. He looked over at my boat with a big smile, and said “Groovy man, groovy.”

Ritter passed away last month, one month short of his 60th birthday.

“Tim approached me in the late 1990s about starting a race series that would upgrade paddleboarding from simply jumping in the water, paddling, and then going home, to something more memorable. His vision was to make each event a full day, where the paddlers could get to know each, and form lifelong friendships,” recalled Paul Hennessey.

Hennessey owns taverns in just about every beach town from Pacific Beach on the Mexican border to the three beach cities.

‘Most of our customers are surfers and paddlers. The races were a way for Hennessey’s to give something back,” he said.

“We had cash prizes for the top finishers, and every paddler received a swag bag with board shorts, rash guards, and towels that were worth much more than the entry fees. The San Francisco race had black and white striped rash guards because the race went around Alcatraz,” Hennessey said.

“Tim should have been a promoter instead of a painting contractor.”

The first Hennessey Series Paddleboard race, from San Pedro to Torrance beach, had 127 paddlers, the most to that date of any prone paddleboard race. The 2002 Hennessey’s World Championships in Hermosa Beach had more than 200 paddlers, another record number.

Over the next decade, as stand-up paddleboarding became the fastest growing water sport in the world, Ritter added a stand-up division to his races.

But he shared the reservations many prone paddlers have for the rival sport.

“Prone paddlers race regardless of the conditions. Stand up paddlers don’t show up when it’s rough,” he told a reporter when stand-up was at the peak of its popularity.

By 2013, SUP’s popularity had waned, Only a single stand-up paddler entered the Hennessey Return to the Pier race, from the Hermosa Pier to the Manhattan Pier and back. But stand-up’s decline had also dragged down the number of prone paddlers. The 2013 race had just 50 paddlers. The following year’s paddleboard festival in Redondo Beach was the last he produced in the South Bay.

Levy said the Hennessey Series success was also a reason for its demise. “The races had a starburst effect. Tim and I went to the first Molokai2Oahu race. There were just 17 paddlers. But it grew, along with other paddleboard festivals throughout California, Hawaii and Australia, all modeled after what Tim had done.

Ritter grew up surfing in front of the Neptune lifeguard tower with other neighborhood kids, among them, Derek and his brother Mark.

In 1995, the Levys and a few friends, after having competed in the Catalina Classic, decided to embark on adventure paddles.The first was the San Francisco Bay, followed by Lake Tahoe — on the same day. Randy Meistrell, one of the paddlers, enlisted Ritter to escort them on a personal watercraft.

On the way back from Tahoe, Ritter surprised his friends by saying he wanted to paddle.

“A few years earlier Tim was my paddle escort in the Two-Mile Pier to Pier Swim and he was so out of shape he could barely keep up with me swimming,” Mark Levy said.

“Derek said paddling would be good for my back,” is how Ritter explained his conversion to paddling. Derek is a chiropractor.

“Whatever Tim did, he was all in,” Meistrell

His first distance paddle was across the English Channel.

“Eight days we sat it out in Dover,” Ritter said in a 1995 Easy Reader interview. “There were gale-force winds, rain. The weather was so horrendous even the boats wouldn’t go out.”

Then, a day before we planned to head home the weather broke.

“It was the prayer at Canterbury Cathedral,” Ritter said. “The vicar offered a prayer for us and we lit candles and that seemed to do it.”

“Tim and I were together as we approached the French coastline,” paddler Charlie Didinger recalled. “We could see the lighthouse about a mile and a half away and we were paddling but we couldn’t get anywhere, the current was pulling us away. That was getting a little depressing, but then the current just went away and we paddled right in.”

“It was pretty emotional the last quarter mile,” Ritter said. “There were tears in my eyes.”

In subsequent adventure paddles, the group would circumnavigate Manhattan Island, and Catalina Island. and cross Loch Ness and the Cuba Straits, from Florida to Havana.

Shortly after Ritter’s death, his friends gathered at the Bull Pen to share remembrances of their surf trips to The Ranch and San Onofre, ski trips to Mammoth and Aspen, volleyball at the Manhattan Six Man and Hermosa Labor Day tournaments, and the paddleboard races that gave new life to a sport that was in danger of fading away.

“Tim was like a gravity force. He drew people in,” Levy said.

Ritter is survived by his daughters Alexandra and Kate, first wife Linda and second wife Roberta. A paddleout in his memory will be held Saturday, Nov. 6 at Torrance Beach. ER