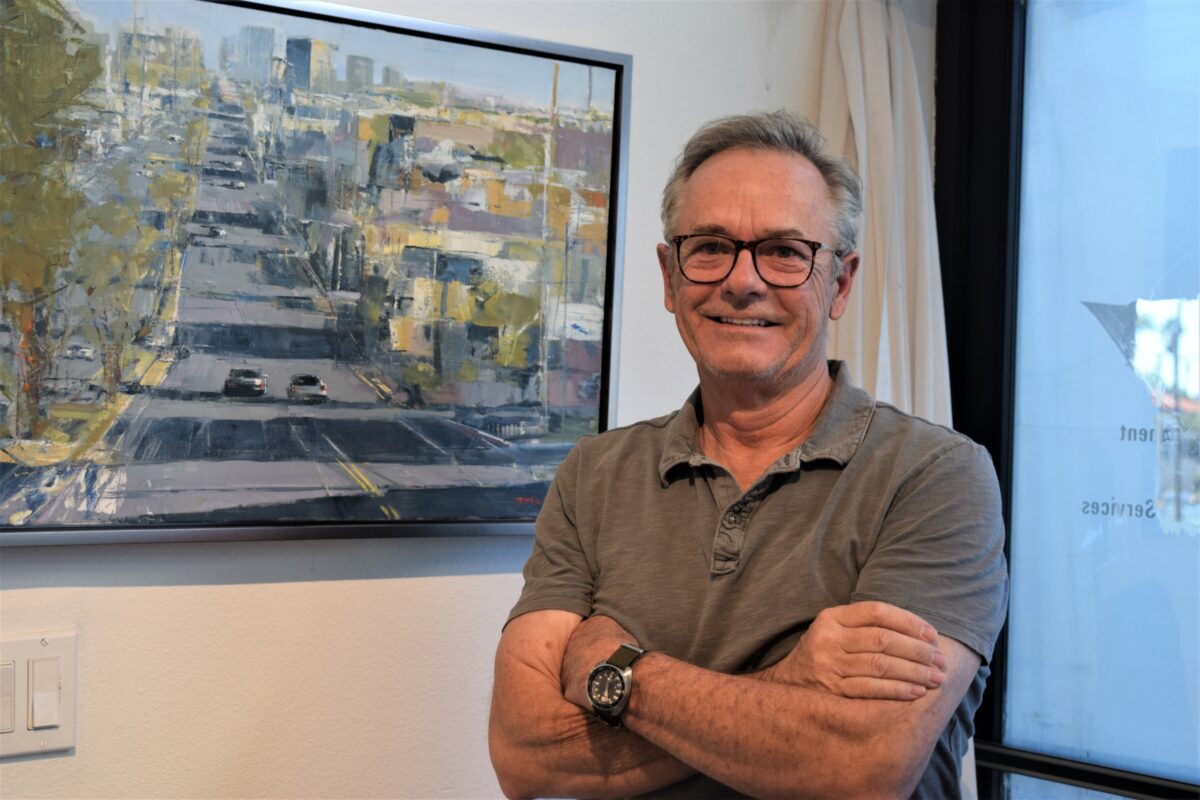 Many artists, before sitting down and getting creative, struggle with what to make and how to say it best, in the medium of their choice. Maybe they wrestle with motivation and self-confidence as well. None of this, from what I can tell, seems to hold back Ross Moore, who has a spacious studio on the corner of Knob Hill and PCH in Redondo Beach. And right now he’s preparing for Saturday, when he’ll show his newest paintings.

You can fill in the blanks

“I’m very fortunate to have my art on the walls,” he says, “and my studio is set up for it. I just open the door, walk in, and I’m working. Just a little bit of inspiration and I’m good to go.” 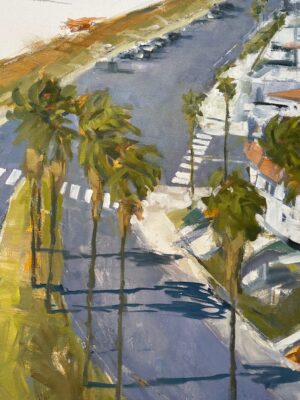 Moore also lives in Redondo, and that “little bit of inspiration” that gets him moving is often a local scene, a stretch of roadway with palm trees or the ocean on one side, or people at the beach soaking in some rays. Not one oppressive or depressive picture in sight. Moore remarks that he sells most of what he paints, and that seems to be largely by way of two local galleries—Dion Gallery in Redondo (which he’s exceedingly appreciative of) and Riley Arts Gallery in Manhattan Beach.

Although many of the images may appear generic and sometimes effortless, Moore knows exactly what he’s doing, the effect he’s after, and he’s very good at explaining it, too. After choosing a subject that he likes it’s more than just adding paint to a canvas. “I try to find the essence of that scene and then bring it to life. A painting is just a snapshot, it doesn’t move. It’s a moment in time, but the whole story needs to be there. So I try to put everything I can into it, but I leave enough information missing so the viewer can fill it in on their own, with their own mind.” 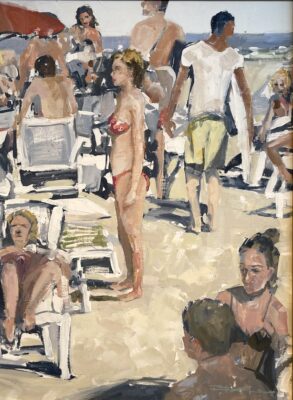 “Alone in a Crowd,” by Ross Moore

To put this another way, Moore’s paintings are representational but semi-abstract at the same time. People and places may be recognizable, but not the details. The reason for this is to reel in the viewer, to entice him or her to look closely at the work in ways they might not have done otherwise.

“The viewer has to connect with it,” Moore explains. “When somebody looks at it, they have their own opinion of it. And that’s an interesting thing to see, that someone can look at the painting and get something out of it that’s different than what I was saying, but it resonates with them immediately. The viewer and the artist, we’re on the same plane. Not to be metaphysical about it, but we’re thinking the same way, and it’s a powerful thing. It’s really the reason I paint, to get that connection with someone.” 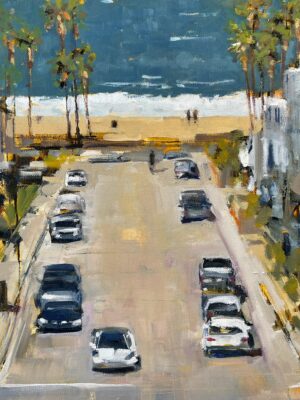 Some of Moore’s pictures are composites, a montage of disparate images now integrated into a seamless composition. But does he take his own photographs that he can then work from?

“I have a camera in my car all the time so, yeah. When the light’s right, somewhere, I grab the image.” Moore points to a painting that looks down towards Hermosa Ave. and, farther out, the shoreline, from (presumably) Manhattan Ave. and 14th St. in Hermosa Beach. One could consider it an iconic view, and because it appeals to him Moore says he may paint additional variations of it.

“The people that are interested in my art,” he continues, “may look at the image and they go, Oh, is that 14th St. in Hermosa Beach? Or, is that the sushi place on Coast Hwy? And it is, you’re right.” At the same time, “It’s whatever you want it to be. It kind of doesn’t matter what the subject is: What’s grabbing you and pulling you in? That’s what I want to know.

“These paintings are very abstracted, really; that’s the true sense of this art, because it’s an abstraction of an image. But it’s image-based. And it’s a joyful thing to have somebody look at it and say, Wow, I don’t know what it is about that painting, but I just love it. It’s very gratifying for me.” 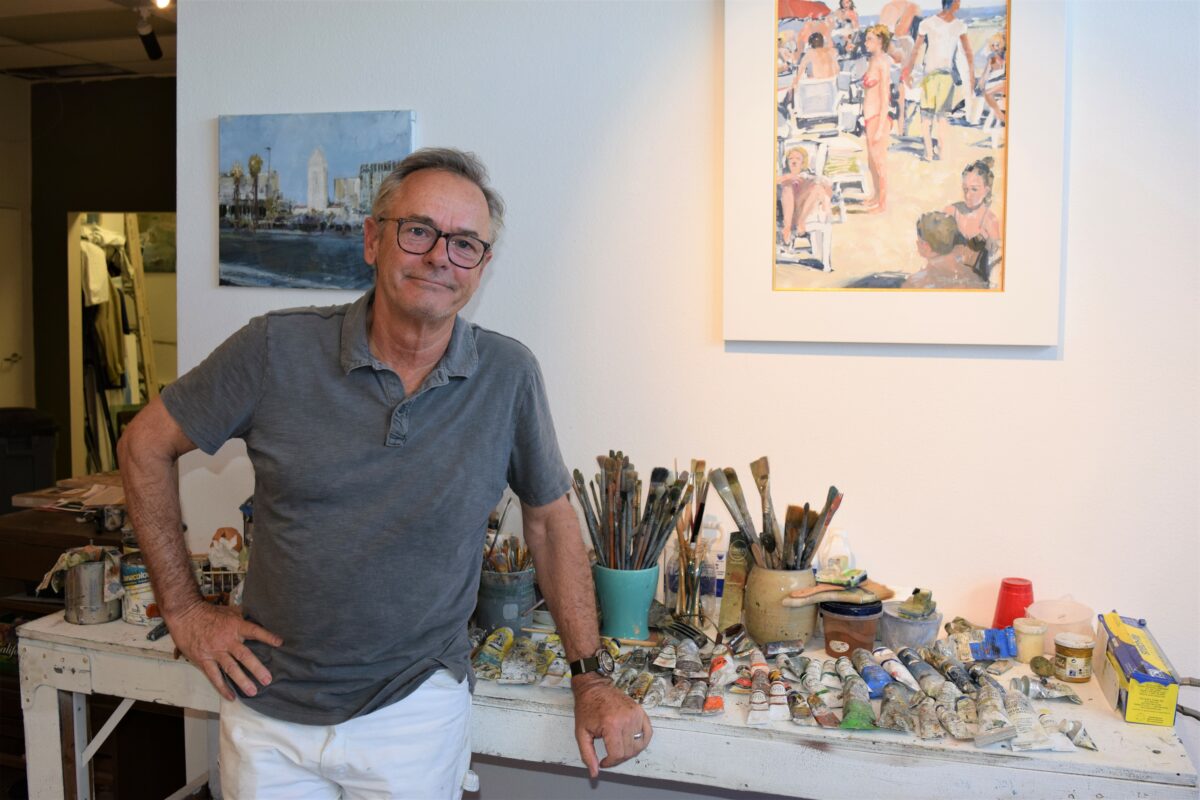 Take the tools and start

Ross Moore has had studios to work in for about 30 years, and the present one for maybe a year and a half, but where did he start out and how did he gain an appreciation for art? 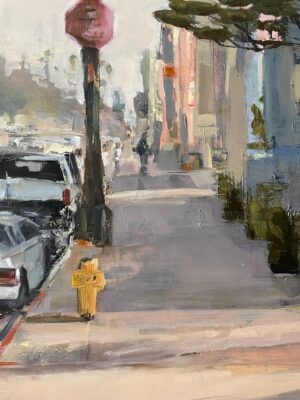 “I come from a large family,” he says. “I have 12 siblings. My mother just picked something for everybody to do, and she gave me the paper and pencils and said: You draw.” He laughs. That was in San Francisco, and Moore frequented the De Young Museum of Art in Golden Gate Park. The family then moved to St. Louis and Moore studied “with one of the best watercolor artists when we lived in the Midwest,” a woman named Leona Cooper.

Not long after this, Moore was back on the West Coast, and he attended Redondo Union High School. He mentions his art instructor, Jack McClain, who recognized his talents early on and gave him full run of the supply room, with everything at his disposal: “I spent two years in high school just drawing whatever I wanted to.

“From there,” he says, “I met Ken Auster in Laguna Beach. I studied with him personally for six years. That was probably in the early 2000s. So here I am today, and I love it; and I have a great time with it.” 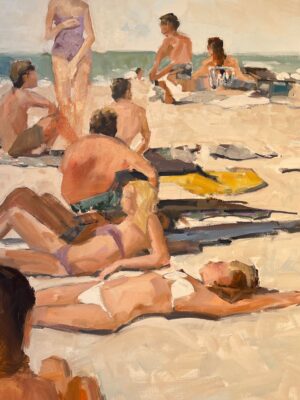 Some artists will attend college and get a Bachelor’s degree, then a Master’s, and even a Ph.D, but after a couple of years at El Camino Moore had all the skills he needed. And when a person has all the tools, maybe that’s when it’s time to put them to use.

“Someone can teach you process and mixing colors and theories and concepts,” Moore points out, “but you have to paint, you have to create yourself as an artist. But really every artist is self-taught: In the end it was them, it wasn’t Yale or the Pasadena school of whatever art. It was them. They just worked hard, and it takes a long time to get to the point where it’s authentic, when you pull the brush across the canvas and it is you.

“And I can tell you, every painting that you see here”—gesturing to the walls of his studio—is in one respect or another autobiographical. It is me that you’re looking at. It’s me. Christopher Le Brun is the former president of the Royal Academy of Arts, and he says that what you seek should be authenticity. That’s what I try to go after, authenticity. But he also said something interesting, which was, The worst part of your painting is really more you than anything else. I always think about that when I’m painting.” Certain writers, present company included, often wonder about the same thing.

The Neanderthals got there first

Moore brings up the New York magazine art critic Jerry Saltz, who apparently posed the question “What is art?” and then posed the answer, along the lines of Art is the ability to put thought into material and express yourself. “Emotionally, probably,” says Moore, “or however you want to express yourself. 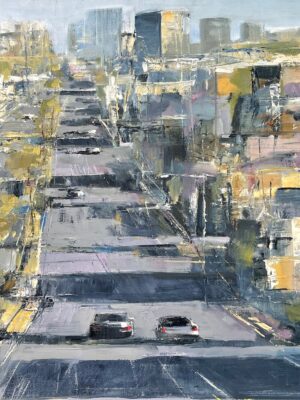 “So, once again, you load a brush up with a bunch of paint on it, that’s the material, and you put it onto the canvas. That’s the ability to embed your thought into the material. And so, I live by that.”

If the thought is embedded in the paint (the form, shape, etc), then it can all but literally speak to the sensitive person who is engaged with the work.

It’s an intriguing concept—thought by way of material lodged in a work of art, and ready to divulge its secrets to those on the the same wavelength—and Moore takes it back virtually to Day One, when a Neanderthal picked up a stick of charcoal and drew an antelope and maybe a spear-thrower on the wall of his cave. “There was no written language, no spoken language, no music, no dance. There was no art. But what that person did was to embed their thought into the charcoal and make an image that meant something emotionally to them.

“This is way more poignant than ‘Is that 14th St, Hermosa Beach?’ See, I’m coming back to that now—but that’s exactly what I do today.”

In short, the beat goes on.

While the Neanderthals and other early people had their daily distractions, they did not have our present day temptations, such as the internet, that pursues us relentlessly. But Moore knows his workplace is sacrosanct, and he treats it as such.
“I don’t do that here,” he says of social media and the like. “I’m steeped in the creation.”

The artist. Photo by Bondo Wyszpolski

And yes, it’s all around us on the walls of his studio, a large and impressive body of work.