For anyone who isn’t familiar with Sichuan cuisine, a meal at Rui Ji may be a challenge, but that’s exactly the reason to go there … 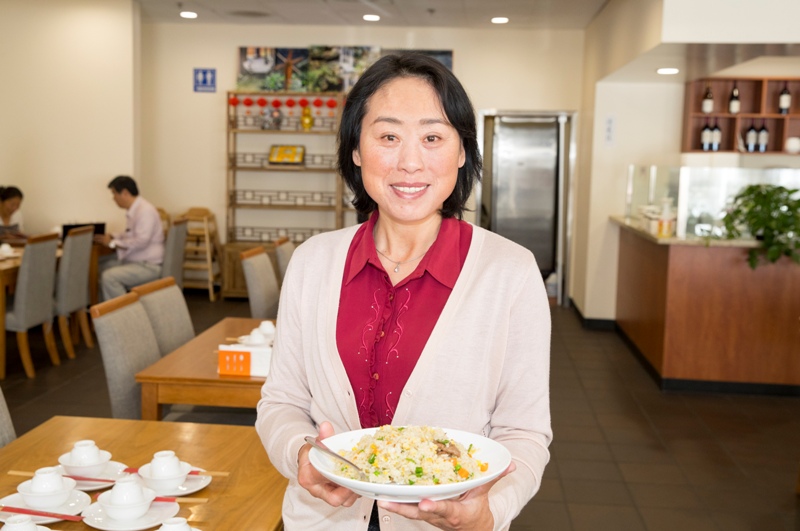 If you go to almost any Chinese restaurant, there will probably be an item with the icon of a chili pepper next to them, and a name like “Sichuan pork.” What you actually get if you order it may vary from place to place, but it will involve oil, garlic, and chili peppers. It’s also a fair bet that it doesn’t closely resemble anything eaten by people in the Chinese province of Sichuan.

This happens even at otherwise authentic Mandarin and Cantonese places, because Sichuan cuisine is very different from the coastal regions from which most Chinese emigrated. Chefs in the mountainous inland province have different traditions, different spices, and different ideas about flavor.

Until recently anyone wishing to try authentic Sichuan cuisine had to make the long drive to the San Gabriel Valley, but a restaurant that opened last year in Lomita makes that trip unnecessary. Rui Ji is almost unknown outside the Chinese community and hasn’t made any great attempt to educate outsiders. When I asked about a puzzling menu item I was told that they don’t worry much about the English translations because not many people visit who can’t read Chinese. A few minutes on your smartphone’s internet will give you at least a guess as to what you might be ordering, despite occasional evocative or oblique names. I suggest one of two strategies: go with a bunch of friends and order a whole bunch of things and see what happens, or ask your server for help.

The staff is fairly fluent and helpful, and if you do the latter be honest about whether you like spicy food, and insistent if you actually want it, because they will probably steer you away from the hottest dishes. There’s a special icon on the menu for those labeled “numbing hot,” and it’s entirely accurate. The cuisine uses a spice called Sichuan flower pepper that will actually overwhelm your tongue and lips so that they lose all feeling. As strange as it sounds you should order at least one of them, because it’s a unique sensation that is at the heart of this cuisine.

In three visits I tried items that ranged from mild and sweet to explosive, and enjoyed most of them. Pork with winter melon soup started out one meal with a gentle mix of sweet, rich, flavors, and it wasn’t until the third or fourth spoonful that I noticed the underlying notes of white pepper and ginger. It was a subtle surprise, and a good way to ease into the fireworks to come.

Those showed up soon enough with an order of crispy spare ribs that had a thick coating of cumin, garlic, and other spices and were topped with chilies and chopped scallions. The ribs were in a puddle of chili oil and we could smell their pungent, alluring scent when the server delivering them was still several feet from the table. They weren’t marked as numbing hot but after a few bites our lips were tingling, and after a few more our foreheads were sweating. If you have never enjoyed really hot food before, this might not seem like a good thing, but it was. I have read that very spicy food releases endorphins that make you slightly high, and I believe it, because there was something exhilarating about these. 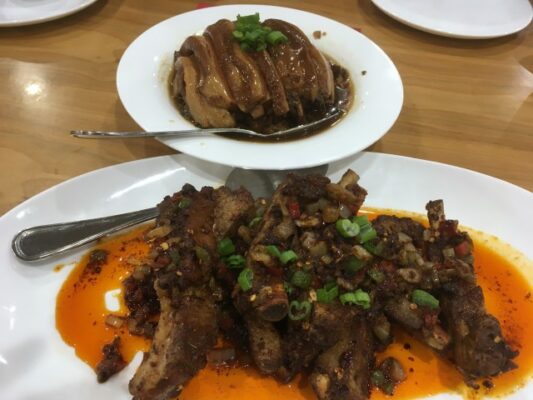 When the heat got a bit too intense we cooled off with rice and with an item called Grandma’s braised pork. We never met Grandma but can tell she has a sweet tooth, since there was brown sugar and soy in the rich, mild sauce. The pork was very similar to bacon and somewhat fatty, but that made it a perfect antidote to the more fiery items. One of these was something we ordered because we couldn’t figure out what it was – braised duck with shredded konjak. We knew the duck part but hadn’t had konjak before. It’s a tuber prized for its mild flavor and jelly-like consistency, and the Sichuanese enjoy it for its texture. It was in a sauce that had a fair amount of chillies and some vinegar and was an interesting experience.

Alongside these unusual dishes we ordered two that we knew well: dry-fried string beans and eggplant in garlic sauce. The beans were the only disappointment of the meal, fried in oil to the proper slightly leathery texture but oddly one-dimensional. The balance in this dish is usually between the vegetable, shreds of garlicky  pork, chili, and peanuts, but the peanuts were missing in action and the pork was mildly seasoned. The eggplant in peppery garlic sauce was everything we hoped for, richly seasoned with chili, onion, sesame oil, and just the right amount of chili peppers.

On another visit I tried roasted duck in a sweet sauce and cabbage fried with chili peppers and oil. The cabbage was marked with a chili pepper but barely deserved it, and probably would have been better as a respite from something that had a handful of numbing peppers. That didn’t include the duck with a skin rubbed with sweet spices, which was meaty and rich but not what we went there for. We had accidentally ordered two of the milder items on the menu, and while they were decent we wished we had asked our server for help with balancing the flavors so we got something more challenging. Only later did I realize that it had been a valuable proof that someone who doesn’t like hot food can find things here to enjoy.

For anyone who isn’t very familiar with this cuisine, a meal at Rui Ji may be a challenge, but that’s exactly the reason to go there. The dishes are inexpensive, so take some friends and explore this cuisine together. Odds are that you’ll all find something you like, and you’ll learn something about the real flavors of one of China’s most celebrated regions.