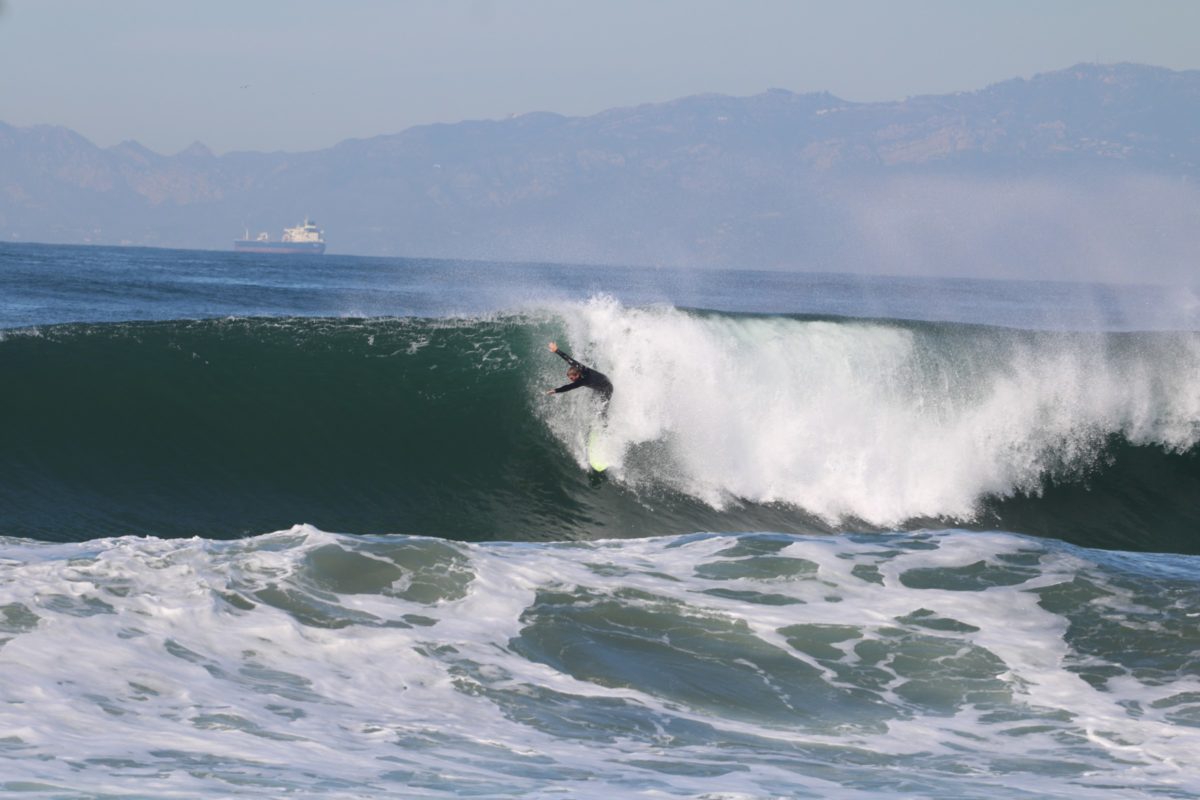 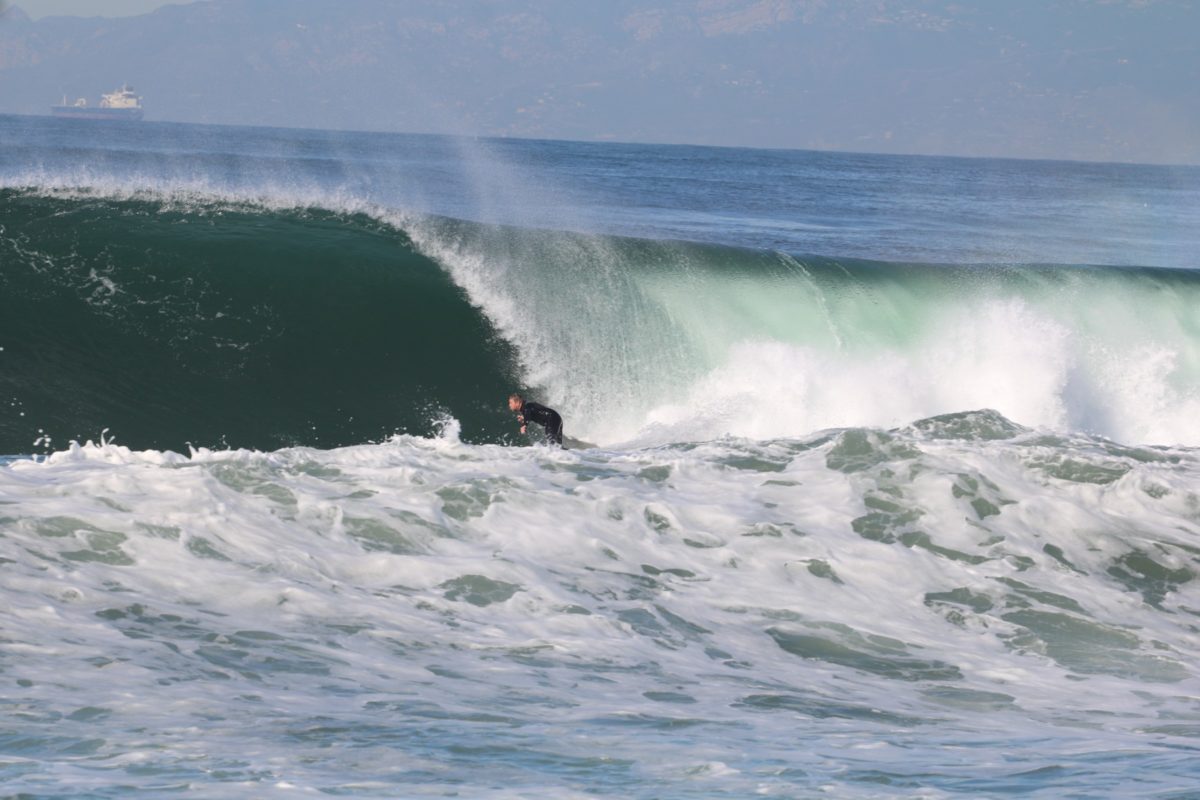 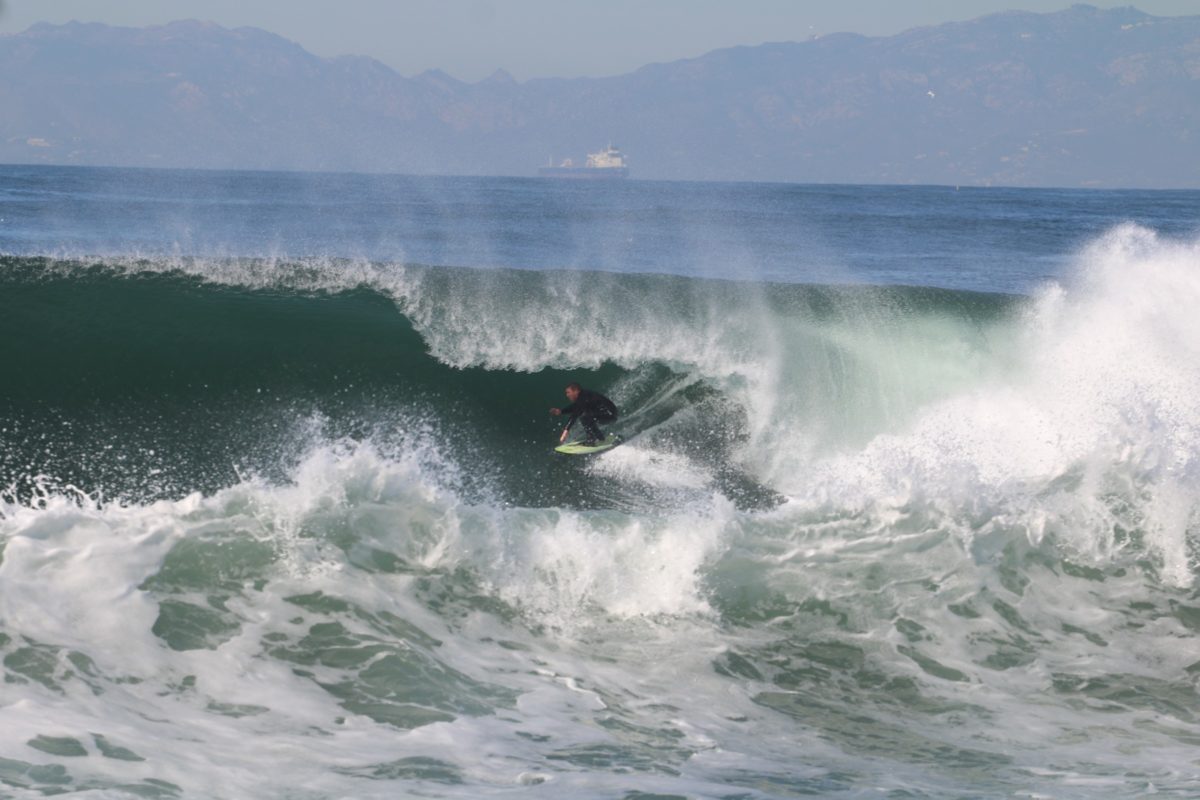 Pat Webber, of Torrance, staked his claim to being the best big wave surfer at Torrance Beach with this free fall drop followed by a double barrel ride down the beach on the day after Christmas. Photos by Tim Tindall

Every Saturday before Christmas, Nick Weber presents the Ratopia Surf Classic at Torrance Beach. The contest was founded in 2005 to raise funds for 22-year-old local surfer Denny Bales, who was diagnosed with Hodgkin’s Lymphoma. Since the contest’s ounding, it has raised $150,000 for the Leukemia and Lymphoma Society.

Every year Santa rewarded the contestants for their good behavior with a present of fun surf.

“I don’t believe it. The surf is good again,” veteran longboarder Shawn O’Bryan said when he arrived at the contest. The Ratopia always has good waves no matter how bad the contest conditions may look at the start. Two years ago it was blown out beyond recognition in the morning but the wind switched and the waves were good for the finals.

This year saw pea soup fog and a near record, 7-foot high tide for the first heat. Non-contestants waded in the water so they could shout out jersey colors to the judges, who otherwise couldn’t tell who was up.

Weber had his hands full because Ratopia is not just a surf contest. It’s a beach festival with body surfing and costume surfing contests. For the non-aquatic, there are also beach runs and push-up and pie eating contests. Local surf shops and restaurants donate to the drawings. At the silent auction, a new Ferrara surfboard went for $200 and a new mountain bike for $100.

Weber started the contest by singing the “Star Spangled Banner.” It was the best rendition I’ve ever heard. He should be singing at Dodger Stadium.

Joey Lombardo and Mike Siordia helped me, judge. Despite the high tide, the early contestants l got plenty of 3- to 5-foot, whomping shorepound waves. The always smooth Will Allan took over the first heat by hanging 10 on almost every wave. Haydon Gunston did some nice coasters but Tristan Durston got the wave of the morning, landing a big floater.

The fog began to lift in the third heat. Carlsbad local Nick Rogers took over with long rides and big coasters. Local Rodney Buck got smooth nose rides all day long and Carson Wanke had some with radical cutbacks as he sped down the line and into the dry sand.

The star of the day was 9-year-old Jett Prefontaine, of Carlsbad. His dad Homer swam out with fins and shoved Jett down the face of the outside waves. Jett would jump to his feet, and carve a mean roundhouse cutback into the hook and finish in the shorepound. The 4-foot waves looked double overhead. Little 9-year-old Cormac O’Bryan gave Prefontaine him plenty of competition. And Ben Oien was no slouch with his big cutbacks and coasters.

In the teenage division, Ryan Hughes and Parker Browning put on an air attack, dogfight. The longboard had Will Allen and Rodney Buck getting nice tube rides through the low tide bowls. Nick Rogers from San Diego got outstanding heels over tip rides on the fast rights. In the finals, Jett Prefontaine and Carson Wanke were the standouts.