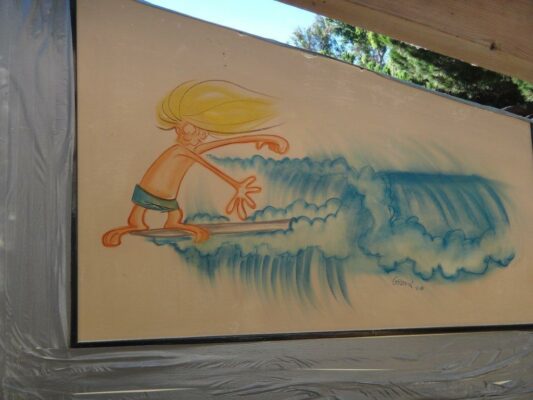 Griffin Mural, a priceless piece being saved from the landfill.

With just 24 hours before a bulldozer is due to destroy two previously unknown murals by surf artist Rick Griffin, two old fans organize a rescue effort

Photos and Words by: Joe Knoernschild

A few Sundays ago, after a fun session at Haggs, I checked my cell phone for voicemails and there’s one from my good friend Mac McKnight. Mac’s a general building contractor.

“Hey Joe, you might want to check out a home here in PV that is due to be demolished this week. There’s some art high up on two of the bedrooms walls that is signed Rick Griffin, 1960.’

I’ve been a huge fan of Rick’s art since the mid-1960s. Many a RG poster was up on my bedroom wall. One I am stoked to still have is his “The Creator Slow Moving Maintains His Creations as Vortices,” illustrating Van Morrison’s album These Mystic Eyes. In 1969, I sent my $1.50 to Surfer and eagerly awaited the postman. A shout of “Yowza” went up when the poster finally arrived. The poster still graces my bedroom wall. 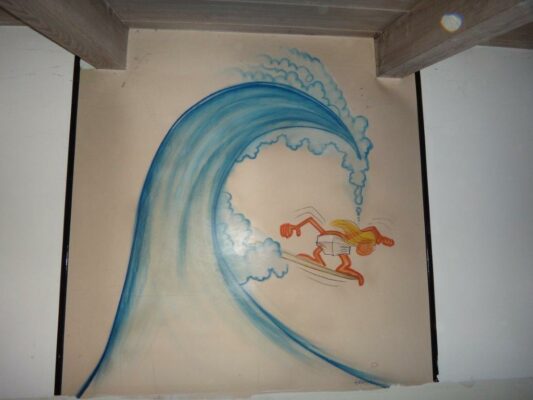 Griffin Art before the artist worked with Greg Noll and Surfer Magazine.

Griffin died in 1991 from an accident on his Harley.

I call my wife Cindy and beg her to meet up with Mac at the home due to be mowed down before heading to church.

Mac shows us the murals.

Wow. This sure looks like the real deal. Who knows about this stuff? Denis Wheary, of course, a good friend and one of the most respected El Griffo collectors.

“Dennis, did I wake you up? Sorry for calling so early on a Sunday morning.” Denis verifies the rumor I’ve heard for years that in high school Rick was asked by his surfing classmates to paint their bedroom walls with his pre- Murphy cartoons. TheLaguna BeachArt Museumback in the 2006 show had a closet door from this period.

Now I am standing in front of two previously unknown works, on plaster (not drywall), on a home due to be bulldozed within a few days.

Rick’s friend Rob Quigley lived here. The home was recently sold and our guess is the owners know nothing about these very cool 1960 Rick Griffins about to be lost to the sands of time.

How to save these Rick Griffins? The demo crew has already torn off the Spanish roof tiles. All the windows are out, and all cabinets, toilets and sinks. The carpets are peeled up.Tomorrow, Monday, Mac tells me, a crew of at least 10 guys is showing up to salvage what they can and then the bulldozer takes over.

Yikes. The clock is ticking. The home is not ours. We call the new owner and leave a voice mail. And we send an e-mail.

Monday morning, Mac is there right at 7 a.m., speaking to the demo foreman. If the art was on dry wall, it’d be cakewalk to just cut it out. But it is painted on the plaster. There are studs, pipes, and a heater vent behind one piece. The image butts up to the ceiling joists and tongue and groove, open ceiling beams. Once the integrity of the old plaster is compromised, the entire painting could slough off.

Still no word from the owners. But we surfers are a cagey breed. Just as with surfboard factories, the currency with construction crews is cash and beer. I have the cash. Mac has two six-packs and ice. The foreman agrees to try to save the art by literally cutting it out — straight through the interior plaster walls, through the studs, pipes and heater vents, clear through the exterior stucco.

I wish we had more time to call in experts, but the bulldozer has been rented. There is a demo schedule to be met. The foreman assigns Carrillo to the task. Soon, he’s hard at it, on a ladder while the tongue and groove ceiling is being peeled away.

Rick’s wife Ida and daughter Flaven respond to e-mails I’ve sent. They ask, if the art cannot be saved, at least get high resolution images shots. I line up a pro photographer with lights and a tripod. He agrees to come Tuesday. But, Monday evening, I get the word the bulldozer is set to go Tuesday morning. It’s getting dark, the demo crew is leaving.

Tuesday, first thing, when I pull up the bulldozer is indeed in the driveway. Parts of the home are flattened. My heart sinks. Carrillo gives me a thumbs down and I’m super bummed. I have failed. Then Carrillo breaks out laughing and pulls a tarp off the chain link fence and shows me the art. He did it.

Griffin mural being carefully cut out of wall.

Getting the cut out walls to my home garage is not easy. The smaller piece is at least 250 pounds, the bigger one maybe 350 pounds. I call Mac who has a flatbed truck. With help from five of his guys we load his flatbed and drive the half mile to my home.

Murals waiting to be picked up.

Flaven emails me a picture of her son, Rick’s grandson. He bears an uncanny resemblance to the surfer in the white trunks — the image on the left — dropping in. 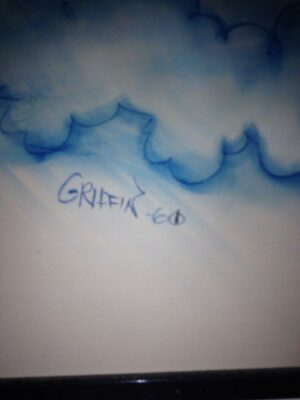 I suppose we could have just “liberated” the art and not informed the home’s new owner. But I’ve learned the hard way it is always better to take the high road. “You reap what you sow.” So, while the art has been saved from the dustbin of art history, it remains to be seen where the final home will be for these two iconic pieces. DZ