Scare tactics under the big top 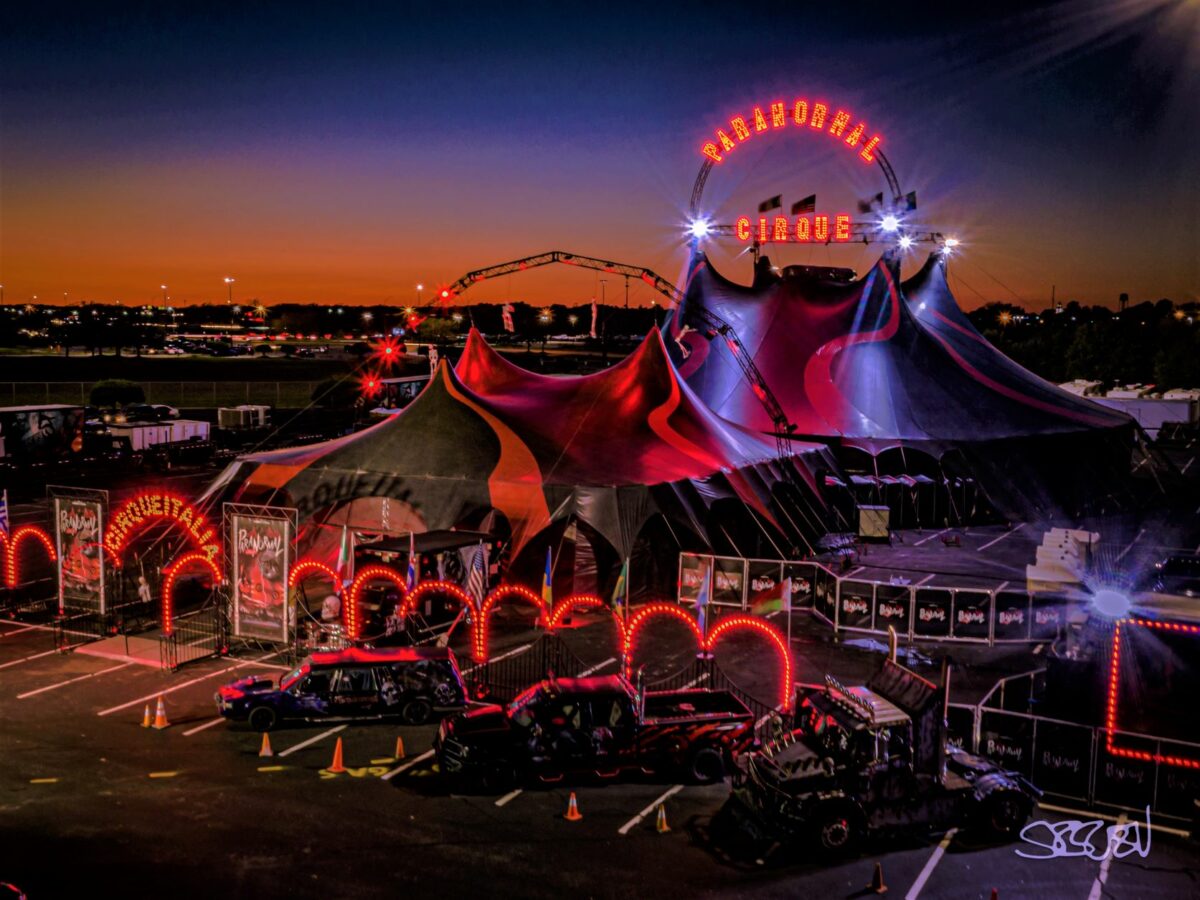 It’s a nightmare in Redondo

Anything goes under the black and red tent of “Paranormal Cirque”

Leave the kiddies at home. On Thursday, August 11, the self-described thrilling, wicked, sexy, and even dangerous Paranormal Cirque opens the dark maw of its tent for six shows in Redondo Beach. They say it’s not for the faint of heart, and if you’re under 18 you don’t get in without a parent. If you’re under 13 you don’t get in at all. It’s that kind of show!

The various acts include aerial straps, a doll contortion duo, tightrope walking and juggling, a roller skating duo, and of course a wheel of death. There’s also a pair of clowns, presumably more menacing than outright friendly, who perform skits during the show, and one of them, who goes by the deceptive name of “Steve,” agreed to answer some questions before he and his entourage roll into town. Consider yourself forewarned.

Easy Reader: Cirque Paranormal is under the umbrella of Cirque Italia. Are there other cirque or cirque-like shows that the company has developed or is developing?

Steve the clown: “Cirque Italia has four traveling circuses at the moment. Two family-friendly water circuses, and two editions of Paranormal Cirque, one of which is touring California at the moment. Next year will bring even more exciting touring productions from the company.”

ER: Does the show travel all year, or just during the warmer months?

Steve the clown: “Because Paranormal Cirque performs in a beautiful, climate controlled tent, we have the ability to tour the United States all year long.” 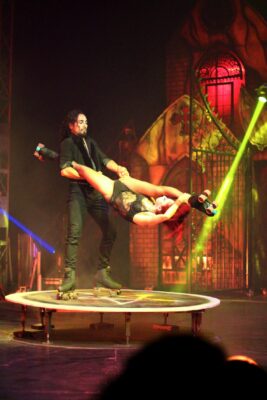 ER: It appears that you’re only in various cities for a few days (four days in Redondo Beach and six shows). How do you decide how much time to spend in one town as opposed to another?

Steve the clown: “The amount of time Paranormal Cirque performs in a city is decided by our corporate office in Sarasota, FL. I believe the decision is largely based on the population of the city and the surrounding area. Social media posts for the selected area begin about a month in advance, and we also have an advance team that travels ahead of the show to put up posters and hand out coupons featuring a discount code for ticket savings to local businesses.”

ER: It seems there is a burgeoning market for burlesque/cabaret-type shows created with a mature audience in mind? Do you think that this is a sort of reaction to the more family-friendly Cirque du Soleil shows?

Steve the clown: “Cirque Italia wants to provide entertainment options for families as well as adults. We have two family-friendly water circuses, as well as the two adult-oriented Paranormal Cirque units. Cirque Italia’s owner, Manuel Rebechhi, is from Italy, and in Europe it is very common for circuses to hold family shows during the day and adult shows at night. He wanted to bring this idea to America, where circuses are seen more as children’s entertainment. Our adult audiences are some of the most enthusiastic I’ve ever encountered.”

ER: My impression is that there’s a hint of the old-style freak show (the carnival sideshow with disreputable characters) in Cirque Paranormal. A bit of a horror or Halloween element to it as well? What were some of the inspirations behind the show’s creation, and, primarily, what is unique about Cirque Paranormal that sets it apart from shows of a similar nature?

Steve the clown: “Paranormal Cirque is truly a unique, immersive horror experience. From the moment you enter our preshow tent you are in the world we have created. Everything is themed and decorated to put our audience in the proper mood to be scared and entertained.

“We encourage our audiences to arrive forty minutes early to experience our preshow, which is included in the price of admission.

“Our patrons can pick up a cool souvenir, enjoy some tasty snacks, and meet our performers up close and personal as they roam the area as scare actors.

“So not only do you get to see two hours of top notch live entertainment, you also get to experience a haunt attraction beforehand!”

ER: What’s coming to Redondo Beach appears to be the Orange Unit The press release mentions that the Black Unit follows an “animal-free policy.” Does this mean that some “units” have animal acts? Are there several units or groups touring simultaneously?

Steve the clown: “All of Cirque Italia’s shows are animal-free. Our four units all travel simultaneously, crisscrossing the United States. Our unit is the Orange Unit, currently in California; the other Paranormal Cirque is the Black Unit, currently in the North East. Our Water Circuses are named the Gold and Silver Units, but those names are mostly for people in the company to easily differentiate the four different shows.” 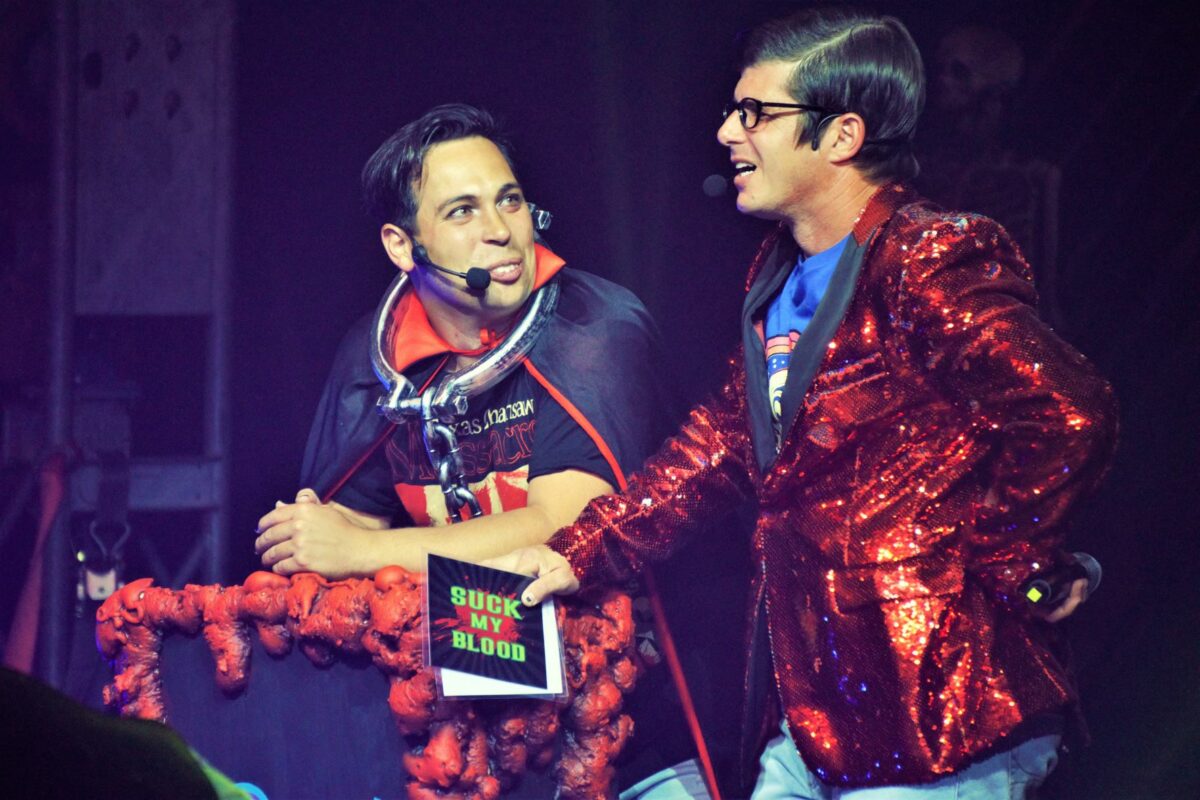 Steve and Ryan perform comedy skits during Paranormal Cirque. Steve replied to Easy Reader’s questions about what they’re up to and what patrons can expect (the unexpected, of course). Photo by Torey Hovland

Steve the clown: “Our cast is truly international. Myself and my comedy partner, Ryan Combs, are from the United States (South Carolina and Massachusetts respectively), but the rest of our performers come from Mexico, Africa, Argentina, and even Italy.

“All of our performers have been in circuses most of their lives.”

ER: The press release says that the show is not for the faint of heart? Should the audience really be that concerned?

Steve the clown: “The most extreme part of our performance is the preshow, which I mentioned is a haunt attraction with our performers out to actively scare our audiences.

“If you are not a fan of being scared, you can always tell our staff at the ticket office and they will give you a badge that lets our performers know to leave you alone. Although our performance is horror themed, it is much more fun than terrifying.”

ER: I see that many of your performers do double-duty, so to speak. Livia Garciacano, for instance, does the “Hair Hang” and is also part of the Roller Skate Duo. What sort of preparation, for example, would she need to do in advance of each performance. I’m guessing there’s a lot of warming up and working out.

Steve the clown: “Everyone involved with Paranormal Cirque wears many hats within the company. The same person who sells you a light-up hat or mask will later be amazing you with jaw-dropping acrobatics.

“Livia pulls triple duty in our show as a hair hang artist, hand to hand acrobat, and roller skating vampire.

“All of our acrobats and aerialists have been training for their entire lives, performing in other circuses and honing their acts over time. They must be dedicated to maintaining a strict diet, exercising regularly, and stretching before and after each act.

ER: As for you and Ryan, your fellow clown, do your comedy skits pretty much have a set routine or do you tailor them to the region or state that you’re passing through? Or are you both good at being spontaneous and able to read the different audiences? For that matter, is there a noticeable difference between audiences in each part of the country?

Steve the clown: “Ryan and I have an outline for our acts, but there is lots of room for improvisation. No two performances are the same, which is a treat for our many audience members who return multiple times.

“As we are onstage we have to quickly assess each audience so we can entertain them and make them laugh to the best of our ability. We rely heavily on audience participation, although we are not the type of clowns who pull someone on stage and humiliate them. In one act we do get someone on stage with us, but we empower them and make them the champion while we are the butt of every joke. We also encourage our audiences to shout out things because it gives us something to play off of and build upon.

“We also try and use local references whenever we are in a city. As social media director for the unit I have the added advantage of picking up on any local jokes our audience would enjoy. For instance, when we were in Hemet, CA the funny comments about the street on which we were located gave us a wealth of material to use in the performance.” 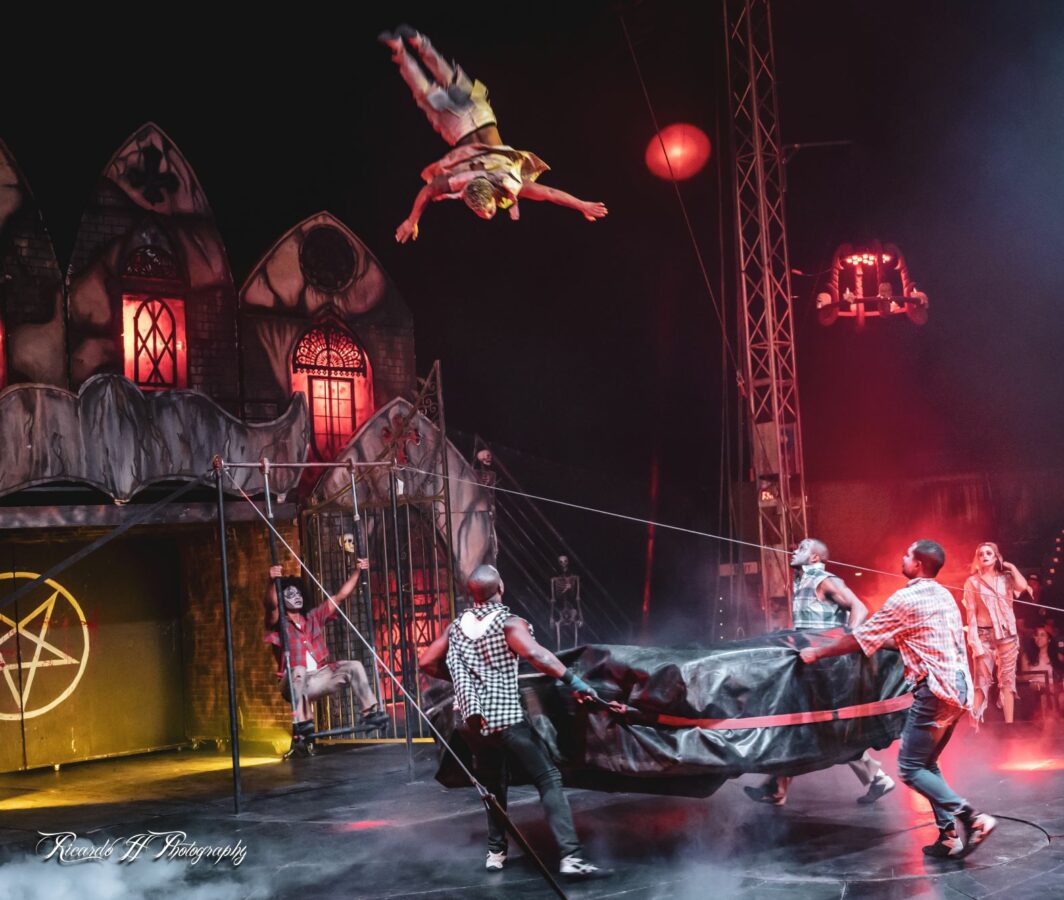 ER: I’m sure that, over the course of a tour, you’ve seen or experienced some unusual things. Do you have any special or strange anecdotes that you’d care to share?

Steve the clown: “We really never know what to expect from our audiences at Paranormal Cirque, which makes it truly exciting for us and for the ticket holders. In the three months we have done this show I could write a book about all of the funny things that have happened when we interact with the audience. I simply encourage your readers to purchase a ticket and come expecting the unexpected. And don’t say I didn’t warn you!”

ER: What else should our readers know in advance of attending Cirque Paranormal?

Steve the clown: “We are touring California for most of this year. All of our tour dates can be found at paranormalcirque.com, and they are updated weekly.

“Tickets can be purchased at our website or at our onsite ticket office, located in front of our air conditioned tent.

“Our show is rated R for bad language and adult humor, so no children under the age of 13 are allowed. Teens aged 13-17 are allowed with an adult guardian, and if you are 18 and over, come have a killer date night or friends’ night out!”