“Scenes from an Empty Church” – Reverential and Irreverent [MOVIE REVIEW] 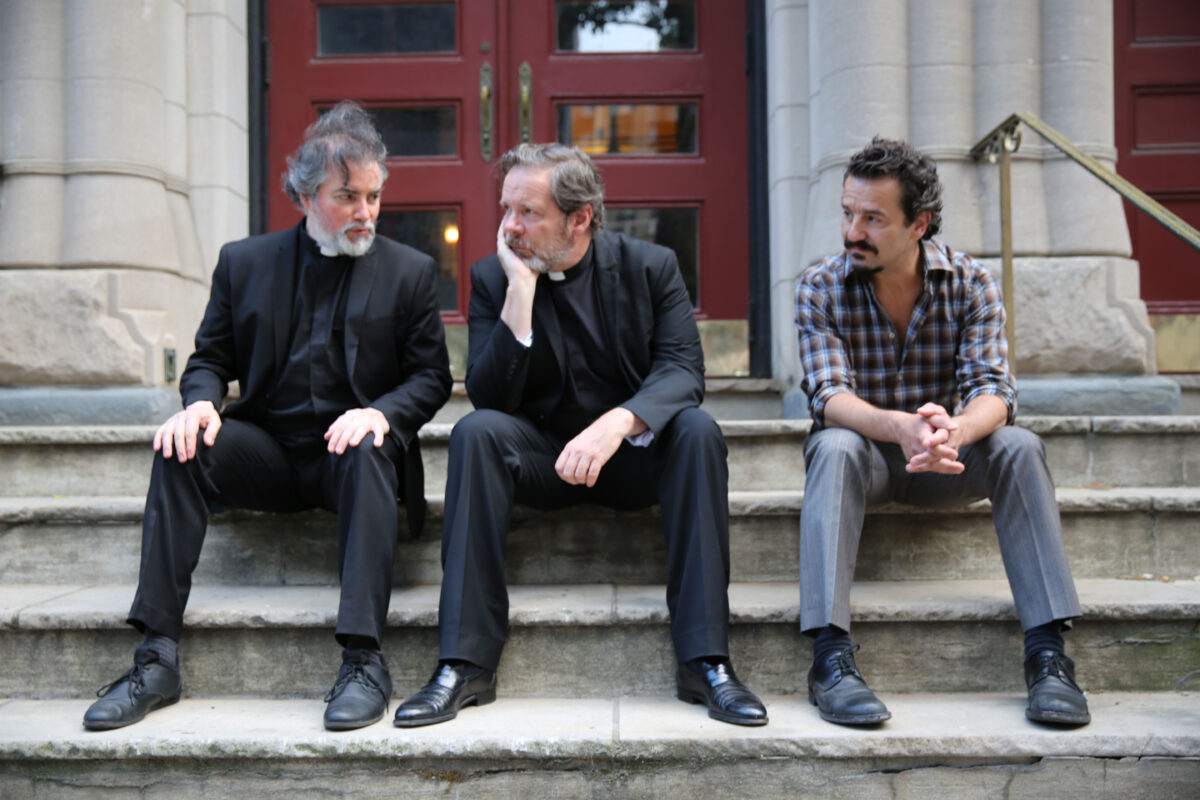 If it were easy to make conversational films interesting, there would be lots more of them. Film is a visual medium; theater is more about the words. “Scenes from an Empty Church,” like the long ago surprise hit “My Dinner with Andre,” successfully straddles both worlds. What it also straddles is hypocrisy and sincerity, although perhaps not intentionally. But more on that later.

Shot during the pandemic in New York City, “Scenes from an Empty Church,” written and directed by Omur Tukel, opens on the scrupulously masked Father James, wiping down the pews with disinfectant and ruminating about the dangers of infection that are everywhere. A bit more open-minded is his associate Father Andrew who feels that perhaps Father James is going a tad overboard.

Father Andrew has some news to contemplate and bounce off his superior. He has just received a letter from a childhood friend after more than a decade of silence. Paul, his long lost companion, would like to come to the church to catch up; he’s made some significant changes in his life and he would like to share them.

Enter Paul, initially masked, who has much on his mind. Soon he has seduced Andrew into removing his mask. It’s just the two of them and Paul is safe, as he assures the priest. Off comes Andrew’s mask and what ensues is what becomes a series of intellectually challenging philosophical discussions about living, dying, the need for God and prayer, and how paranoia and fear have overtaken the populace due to the pandemic when the real need is closeness and empathy.

Their philosophical discussions, primarily led by Paul, are intelligent, open-ended, and humorous, while also occasionally being nihilistic and ironic. Soon Paul has Andrew opening up the church to people in need and Father James allows individual parishioners to sign up for 10 minute prayer sessions and confessions. Realizing the value of the catharsis that these “meetings” bring, James unmasks and allows more and more individuals into the church, even agreeing that Andrew may hold a small wedding in the upcoming week.

Paul, in a continuing round of visits to his friend Father Andrew, even brings about a reconciliation between Andrew and his father, ending an estrangement of many years. Andrew, born a Jew, initially converted based on faith but pissing off his father was an added benefit. Both have mellowed and he is able to have an intense discussion with his non-believing father on “What is God” in different religions. It turns out that Dad is more reflective and knowledgeable than the Father.

Meandering a bit like a well-told shaggy dog story, two of the “scenes” are particularly memorable. The first involves a nurse who discusses the guilt she feels in wanting to quit her front line job. She’s had enough but feels selfish for wanting to prioritize herself. The second is a brilliant elucidation of what money can buy when a man walks in off the street and asks to be baptized. Bug-eyed and intense, there is something definitely off about him. Fathers James and Andrew explain to him that there is a process that he needs to go through and that they cannot and will not accommodate him. And this is where even our “holy” men wobble. Offered a huge amount of money, they decide to disregard the rules of the Church and oblige this peculiar visitor. Once baptized, the visitor receives assurance that he has been absolved of all his sins. There follows a diatribe on forgiveness and insincerity. Our visitor, the Sinner, has done some truly evil things by his own admission, and has just bought his way to forgiveness from them. This episode leads one to wonder if the road to righteousness has progressed since Martin Luther left the Catholic church in the first place.

Our priests, as it turns out, have feet of clay. But then so does our director. Tukel was selling the idea that closeness in a time of isolation is a balm to all. In so doing, he has chosen to ridicule the need for safety protocols. Granted Father James’ paranoia about germs was rather over the top, nevertheless, the removal of masks, the lack of social distancing, the belief in the phrase “I’m safe” undermines all the careful work done by healthcare workers, government officials, and medical professionals trying to keep the majority out of danger. The common good seems not to have entered this picture. The unmasked in this film are disconcertingly present; rule breakers are given a pass. It can be assumed that the timeframe of this film was when the coronavirus was still in its ascendency and yet Tukel is presenting a “God will take care” point of view presented by so many of the Churches trying to hold indoor services throughout the country. 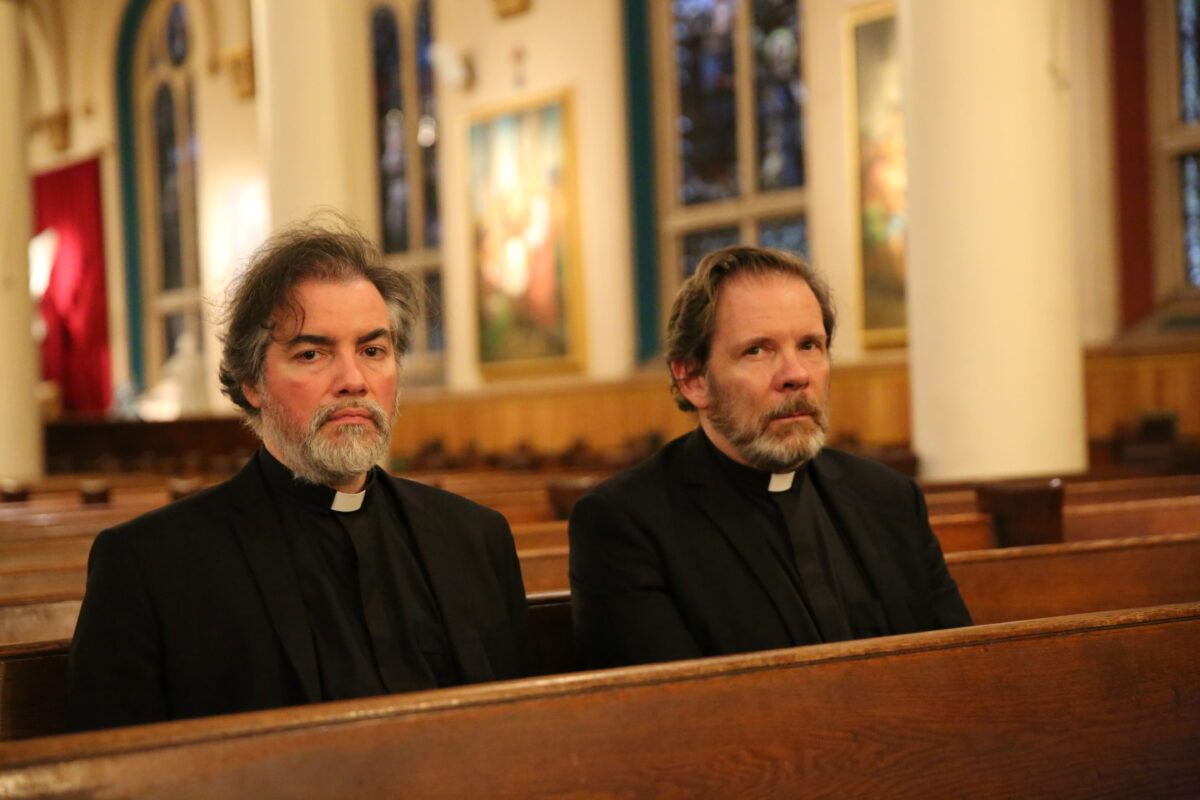 There is another way to look at this film in a way that Tukel clearly did not intend. A truly biblical scenario plays out with Father James and his masked precautions as “Adam” and Father Andrew as “Eve,” the curious. Paul, the erstwhile friend of Andrew is “The Devil” seducing the more vulnerable Eve into removing her mask and succumbing to the disingenuous “We’re all in this together” scenario. Enter “The Sinner” and Adam and Eve tumble down the slippery slope when he buys his way to forgiveness. The Devil has done his work and there is no turning back from opening the doors to the unmasked any and sundry as all healthcare protocols are tossed out the stained glass windows.

Tukel’s cast is exceptional. Kevin Corrigan as Father Andrew and Thomas Jay Ryan as Father James complement each other well and are masters of the small gesture. Max Casella as Paul has shown, once again, that he is a character actor of depth. Paul Reiser as Andrew’s Dad (or the father of the Father) is a welcome counterweight to the “true believers.” Most impressive, however, is Craig Bierko as The Sinner in the kind of star turn that all actors dream of. He enters the scene, steals it and everything around him, and leaves.

“Scenes from an Empty Church” is an engaging and intelligent film, intellectually challenging and verbal in a way that is all too rare. I wish I hadn’t felt the hypocrisy so personally, but then the need for organized religion is not something I’ve felt since childhood, and maybe not even then.