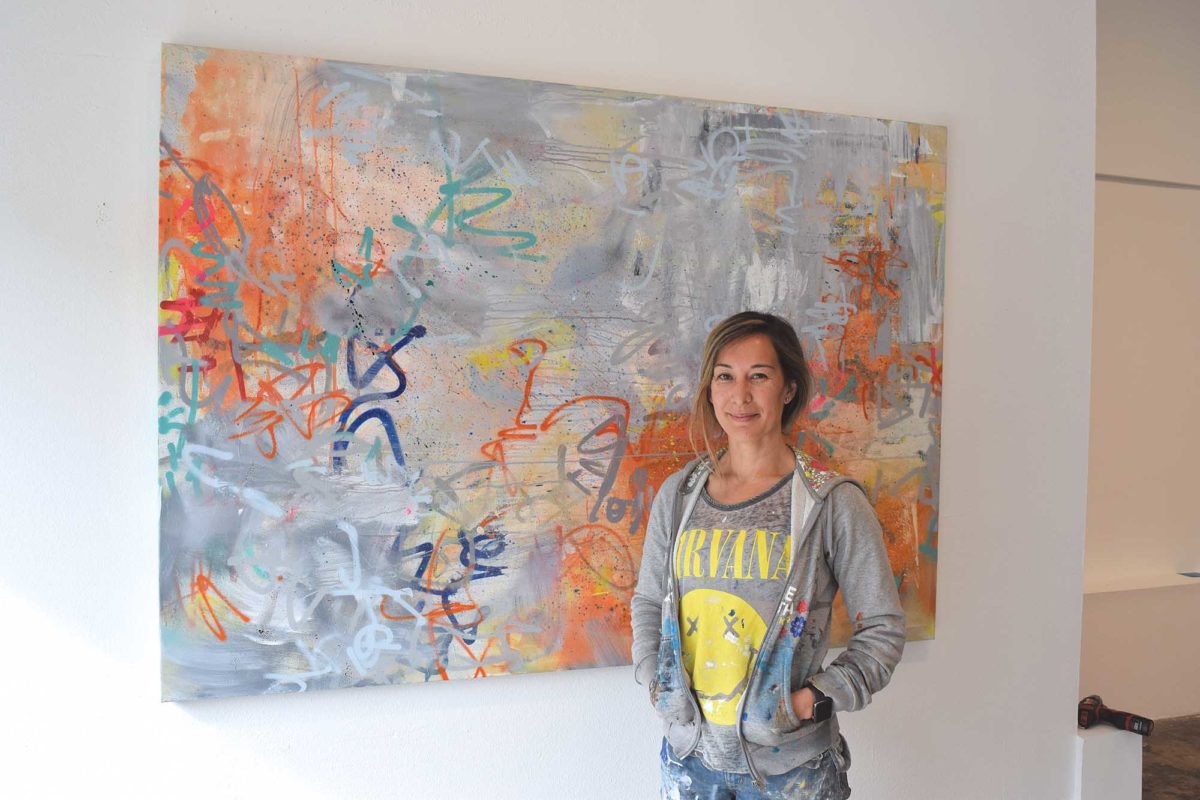 A bigger burst of energy
Laura Schuler’s “Creative Dissonance” opens Saturday at ShockBoxx in Hermosa Beach
by Bondo Wyszpolski
It wasn’t the answer I was expecting.
“I studied systems engineering,” Laura Schuler replies when asked what she majored in.
Schuler, along with Michael Collins, owns ShockBoxx Gallery on Cypress Avenue in the quasi-bohemian district of Hermosa Beach, a couple of doors up from Resin, the art collective run by Rafael McMaster. Schuler has a solo show of her recent paintings opening on Saturday, and that’s why we’re sitting outside, in front of ShockBoxx, on an overcast but warm afternoon.
Schuler grew up in Arlington County, outside of Washington, D.C. “My mom always wanted me to take art classes. But when I got to college I didn’t want to study art: I wanted to study physics. My dad was like, ‘What are you going to do with a physics degree? You need to be an engineer.’”
I’ll tell you what you do with a physics degree, her interviewer exclaims. You discover secrets of the universe!
“That’s what I wanted to do, yeah,” Schuler says with a laugh. “My high school had a planetarium and I went there every Friday morning before school started to hear what the teacher discussed.”
Schuler then attended Virginia Tech, but not to end up giving Stephen Hawking a run for his money. And after graduation?
“I worked for defense for almost 10 years doing project management.”
Although she had “continued to take art classes throughout my college career,” in the years immediately afterwards Schuler “kind of lost the entire art practice.” To learn how she regained it, keep reading. 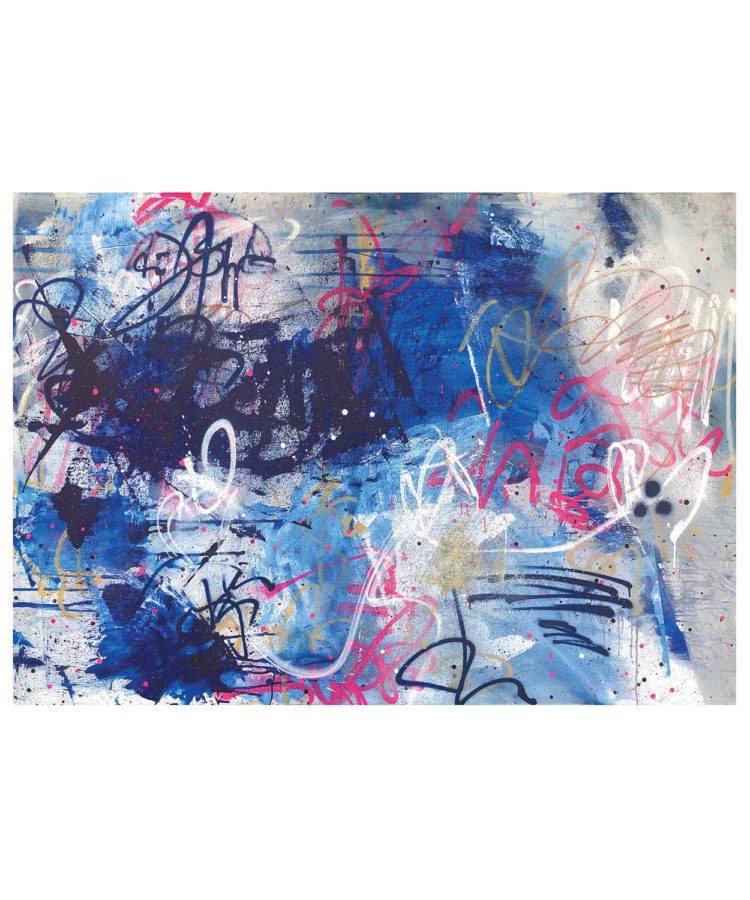 “Step One Of The Los Angeles Starter Pack” (48×48 inches), by Laura Schuler

Energetic canvases
One day Schuler’s husband woke up and the first words out of his mouth were: “I can’t live in Virginia anymore, we have to leave. The weather’s too cold for too long.”
Or something to that effect. It was springtime, that season which doesn’t know if it still wants to snow or to turn on the sunshine and carpet the landscape with a verdant green.
“So we moved to San Francisco for eight months,” Schuler says. “It was cold, it was expensive, and people weren’t very nice.” Pause. “We knew one friend in Hermosa at that time.” 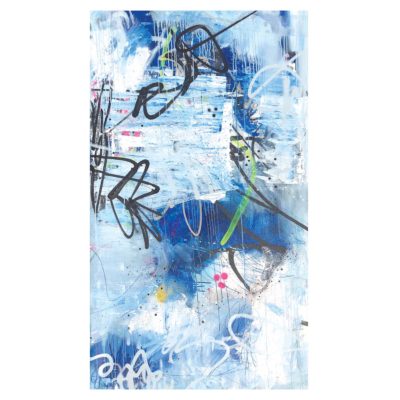 They came to visit, and found paradise. Back in the Bay Area, Schuler’s husband looked for a job in Southern California. As for herself, Schuler says, “I didn’t know if I should be applying for (another) engineering job, and so I decided, ‘Why don’t I create something that I can take with me, instead of having to worry about applying and quitting, applying and quitting.’ So then I started the art practice back up.”
The move south, to Hermosa Beach, happened about four years ago. As a side note, the friend they’d originally come to see had in the meantime moved to Pasadena. Apparently the Schulers weren’t tempted to follow.
So, are you now doing your art full-time?
“Right now, yes, I am,” Schuler replies. My art practice and running the gallery with Mike. That’s it. That’s my full-time thing.”
The art is mostly abstract, I assume?
“It’s all abstract. There’s a lot of acrylic paint, spray paint…” Schuler indicates a pair of canvases behind us. “I have a lot of large pieces. This one is almost four feet by six feet. Not counting the small pieces, I think I’m going to have about 15 of that size (in the show).”
As for the process and the ideas behind the making of her art…
“It’s about energy, and I try to capture that on canvas,” Schuler says. “The process is also pretty reflective of energy, so when I paint it’s not just on an easel.” That’s to say the canvas might just as often be leaning up against a wall.
“I’ll rotate it tens and tens and tens of times before it’s actually done. There’s a lot of pouring water onto paint that’s been brushed onto the canvas and I’m flipping it up to let the thing drip. You have to move around, you have to kneel down, you have to lift things. It’s a labor-intensive process.”
And clearly a battle of sorts. Schuler’s clothes, I note, are splattered with paint. 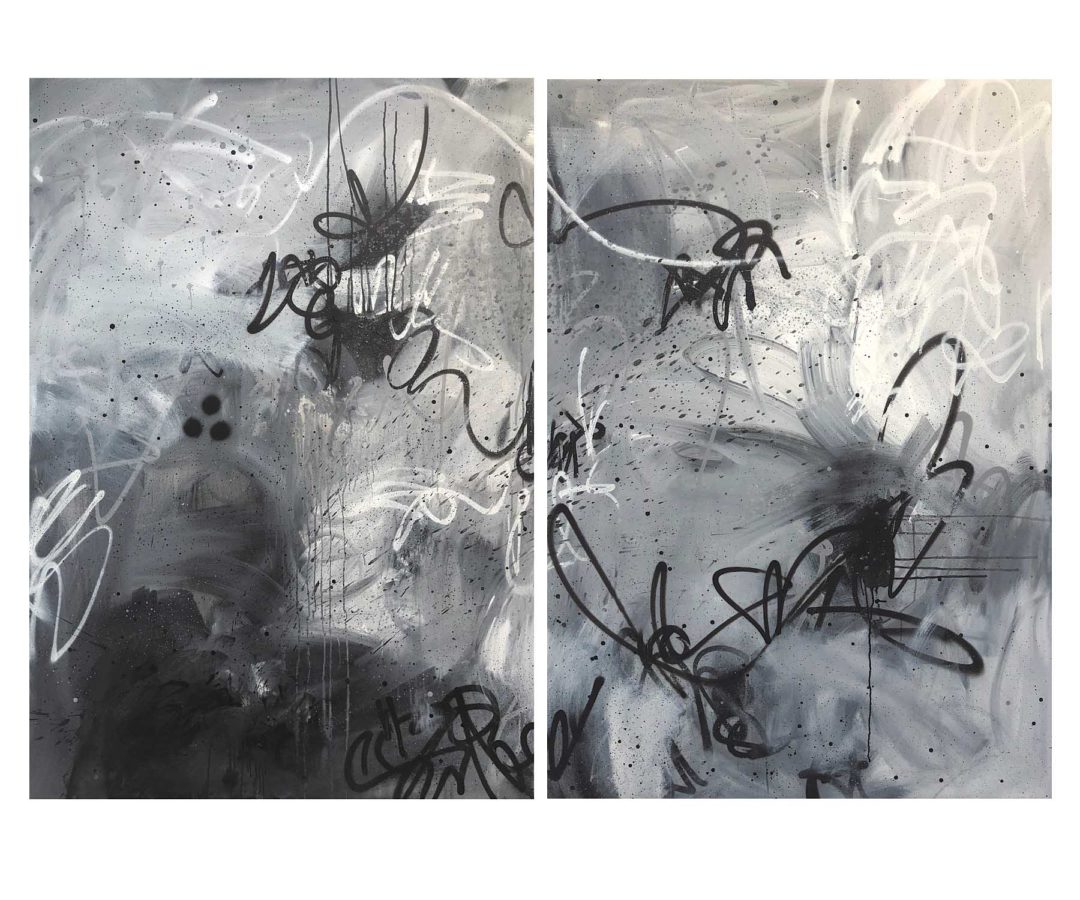 One’s place in the hierarchy
Every blank canvas questions the artist who’s staring at it, brush suspended in midair: Where exactly do you want to begin?
“I start with one color,” Schuler says. “Most of the time it’s blue. But it’s really, ‘What am I drawn to at that moment?’ I guess you could call it anchoring, like what’s that base color that’s going to drive the painting? And then you build around that.
“If you go into where I work there are several movable trays of spray paint cans, there are several movable carts of acrylic paint. Lots of brushes, lots of scraping tools, even lots of different (nozzles) that you can put onto the spray paint cans that allow for a wider or more narrow stroke.”
Are there certain artists that you relate to, that you have a connection with?
“I like to look at contemporary artists,” Schuler replies, before mentioning that she spends “an inordinate amount of time on Instagram” looking for and at the work of others. “Because at this point any painting is derivative of a Monet or a Gustav Klimt or one of the greats. So between my work and between the greats we have all of this derivation in the middle.”
Whether via Instagram or any other method, on a handheld device or in a library basement, we discover our role models or kindred spirits however we can.
“Oscar Murillo is one of my favorite artists right now,” Schuler says. “He’s a Colombian painter. What I like about his work is that it’s very frantic, and I think that the level of energy that he captures in his work is something that I would like to say is commensurate with my style.”
And then I would imagine some of the abstract expressionist painters, maybe from the ‘50s and ‘60s?
“Absolutely, yeah. Anything hanging in the Broad.” 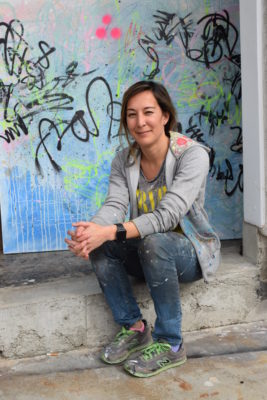 And then closer to home
“L.A. has some really wonderful art,” Schuler continues. “I like to think that if I’d stayed in the D.C area I might not be doing this; or maybe I would, in the sense that I’d be kind of a bigger fish in a smaller pond. But here, there’s just an explosion of art, and there’s something to be said about being surrounded by others that do the same thing, especially with the program that we have at ShockBoxx.
“Right now we have a select group of artists that we want to support, and we’re constantly seeing and feeding off each other’s work. It’s really inspiring to see how hard other people are working, and how many great pieces of art they’re churning out every day.”
It’s reminiscent of being in an academic environment with like-minded individuals, everyone part of and carried along by a mighty current.
“Yes, exactly,” Schuler replies. “It’s lifting each other up, just by doing what you do, and doing it as frequently and as great as you can. Incrementally improving and iterating, and putting it out there and letting people see it, and talking about it.”
That also describes the nascent but fragile arts community that’s formed around ShockBoxx and Resin, as well as the surfboard shapers and recording studios, etc., on and all around Cypress Avenue.
“I think of where we are as a society,” Schuler says. “We have manufacturing on a global scale, (and) anything that we want can be on our doorstep in two days.” But, she adds, “only here, right here, in the entire world can you find paintings like this. Almost everything now is a copy of a copy of a copy, so there has to be something special about these things that are one of a kind that you can only get in Hermosa.” These works might range from Brent Broza’s photographs to Drica Lobo’s paintings, two of the many artists who’ve been thriving in the local environment.
“It’s exciting for me to think about it like that,” Schuler continues, “to have something unique no one else can have.
“If I wanted to share one thing it would be that. I want the community to embrace this little pocket of art that’s happening right now because it’s really special.”
Cognitive Dissonance: A Street Art Exhibit, featuring Laura Schuler, opens with a reception from 7 to 9 p.m. on Saturday at ShockBoxx Gallery, 636 Cypress Ave., Hermosa Beach. Through March 19. RSVP info@shockboxxproject.com. ER