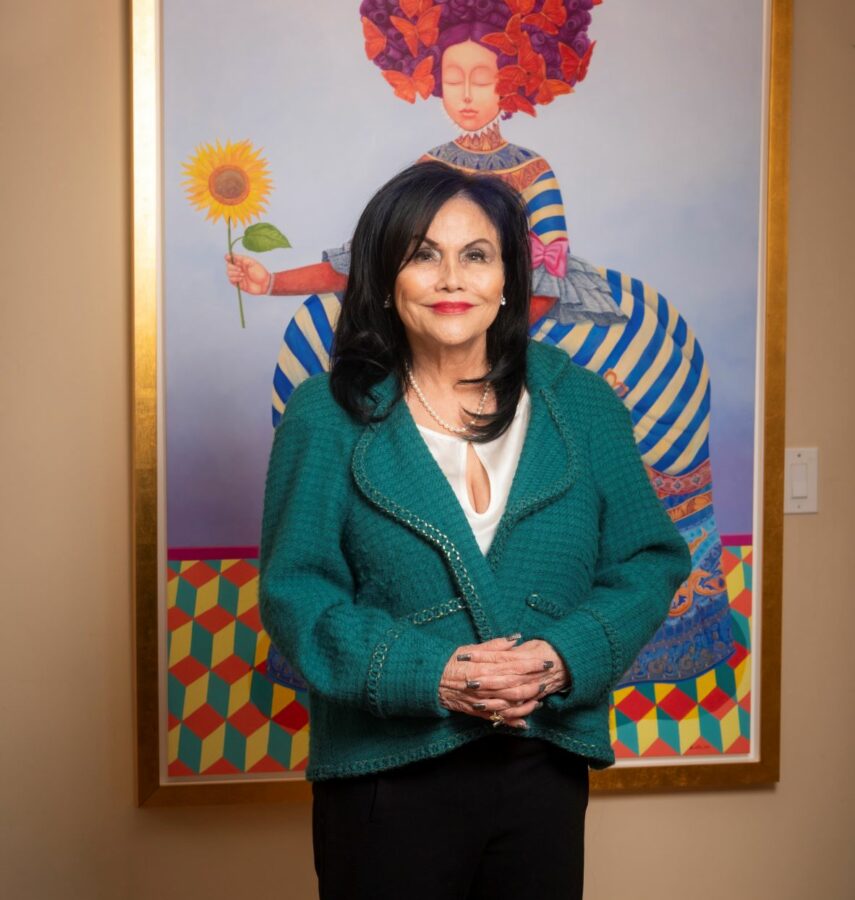 On any given day, Dr. Carmen Estrada Schaye receives about 200 emails. The former professor, political activist and businesswoman usually responds to her messages within minutes.

But an email she received last December gave her pause.

It said she had been nominated for the J. William Fulbright Scholarship Board, and asked if she was interested in the position.

“I thought it was a hoax,” the longtime Rolling Hills resident said.

Before replying, she showed the email to her husband who said it looked legitimate.

Within days, a Fulbright administrator conducted a telephone interview with her and requested fingerprints for an FBI background check.

“Why do I need a top security clearance to be on a board?” Estrada Schaye wondered at the time.

Within weeks of submitting her application, President Biden appointed her to the J. William Fulbright Scholarship Board.

“It took me a few days, actually a few weeks, to get in touch with the fact that I’d been appointed by the president of the United States,” she said.

Estrada Schaye will join a 12-member board that meets quarterly in Washington, D.C. to establish selection policies for the Fulbright, one of the most prestigious scholarships in the world. The program is administered by the State Department’s Bureau of Educational and Cultural Affairs. It grants about 8,000 scholarships annually to U.S. and foreign scholars for individual research, arts projects, graduate degree programs and teaching English.

U.S. Senator J. William Fulbright created the cultural exchange program in the aftermath of World War II to “bring a little more knowledge, a little more reason, and a little more compassion into world affairs.” He believed that cultural diplomacy would “increase the chance that nations will learn at last to live in peace and friendship.”

Since its inception, 380,000 people have participated in the program, which operates in 160 countries, including Mongolia, the Galapagos Islands, Botswana, and Paraguay. Sixty-two Fulbright alumni have won Nobel Prizes, 88 have won Pulitzer Prizes.

As a board member, one of Estrada Schaye’s main jobs is to read the thousands of applications. The candidates, many of whom are from prestigious universities, are chosen for their academic merits and leadership potential.

“They’re visionaries in their fields, even as college students,” she said.

The selection process is shrouded in secrecy. When probed, the former educator would not divulge the criteria she uses to assess an applicant. “I can tell you that the candidates are phenomenal,” she said.

Recent grantees include a Boston University student who will study the femicide epidemic in Turkey through the lens of visual art. Another fellow will travel to Israel to extract phytoliths – microscopic silica bodies produced by plants – to detect the remains of spices left on unearthed ancient cooking vessels. His goal is to find out if ordinary Greeks and Romans living during the Roman Empire used spices to flavor their food and wine. The practice was common among the aristocracy.

Alexandra Fosbury, 23, whose mother is from Palos Verdes Estates, spent a year teaching English in Argentina on a Fulbright, an experience she described as “transformative.”

The Dickinson College graduate said there were moments when she felt like the “sole person representing all English-speaking countries” and as a “cultural ambassador of the United States.”

“As a white, straight, middle-class North American girl, it was definitely hard at times to answer or address touchier subjects about the U.S. because I did not always feel comfortable being the representative voice for such a diverse country,” Fosbury said.

She and her fellow “Fulbrighters” had conversations about how to address topics such as racism, immigration, same sex marriage, and reproductive justice, even though they did not “personally come from communities that experience these things.”

Dialogue and the free exchange of ideas, Estrada Schaye said, are the keys to solving international problems. “It’s creating mutual understanding through cultural diplomacy,” she said.

“That is how we are going to create an understanding of how other people think. How they perceive the world. What their experiences are.”

Estrada Schaye, a former college dean, was an advocate for diversity and women, long before these concepts became part of the political agenda. As national First Vice President of Diversity for the National Women’s Political Caucus in Washington, DC, she has helped get women elected to public office.

Estrada Schaye earned a doctorate in Institutional Management from Pepperdine University, and was a professor at Cal State University, where she taught Cultural Diversity and the American Experience.

“I have known Carmen for decades and I know how seriously she takes public service,” Hahn said. “She has repeatedly stepped up to serve as my commissioner at the local level and now will be serving at the pleasure of the President.”

In December, Estrada Schaye met President Biden at the White House, and thanked him for the appointment. When she asked for a photo, the President “took the phone out of my hand…and he took the picture,” she said.

Estrada Schaye doesn’t know who nominated her to the Fulbright Board.

“I’m proud and honored to be a member of the Fulbright Scholarship Board and I shall represent the values and educational achievement of our country,” she said.

When not reading Fulbright applications, Estrada Schaye manages Historic Home Restorations, a business she founded that is dedicated to the restoration and preservation of historic homes throughout the United States. She also co-created and actively manages with her husband, Dr. Gordon Schaye, Grant Rivers Productions, a film, and television production company. PEN