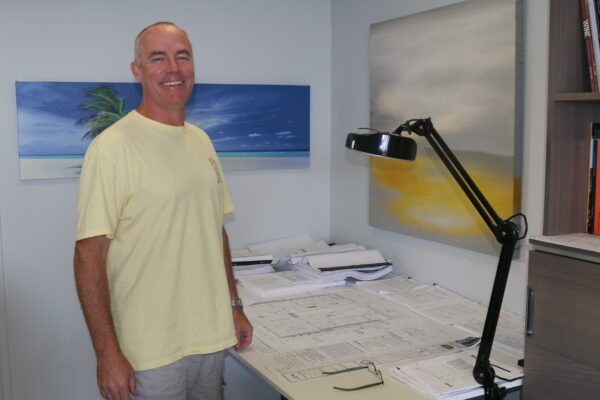 Mike Gallen of OTO Development is proposing to build a 100 room hotel on 11th Street in downtown Hermosa Beach. Photo by Kevin Cody

OTO founding partner Todd Rogers told the council his company is in contract negotiations to purchase the property, which is owned by the heirs of Peter Mangurian. The longtime Hermosa Beach property physician died in 2006 at age 79.

Mangurian also owned the Scotty’s restaurant property on The Strand, but that property is not included in the OTO hotel proposal.

Rogers said his Spartanburg, South Carolina-based company recently built and now manages the Hyatt Place in El Segundo and is building a Marriott and a Hampton Inn at 5th and Colorado in Santa Monica. The company manages 16 hotels in California and has developed over 50 nationwide since its founding in 2004.

“All of our hotels are in great markets. But it’s unusual to find a market like Hermosa that is attractive to both leisure and business travelers,” Rogers said.

He noted that local hotel occupancy rates have averaged 80 percent over the past five years and the proposed hotel would generate an estimated $670,000 annually in bed tax revenue for the city.

But for the hotel to be built, parking will need to be off site, Gallen said.

“Onsite parking is neither aesthetically desirable nor economically feasible,” Gallen told the council.

In a letter submitted to the council last week, Gallen proposed the city partner with OTO in developing the city-owned Parking Lot A on the north side of 11th Street, behind Bank of America. Gallen explained in his letter that Hermosa’s “downtown building height limits and a high water table…restrict the feasibility of developing a successful hotel project with self-contained parking.”

The council voted 4-1 to approve the request to include Lot A in the development application. Councilwoman Nanette Barragan said she opposed the motion because she favors onsite parking and wanted other parking options explored.

In July, the council gave approval to the developers of a proposed, 120-room hotel at the corner of Pier Avenue and The Strand to include the city owned Parking Lot B in their development application. Lot B is north of Pier Plaza immediately east of the proposed Pier and Strand Hotel. ER