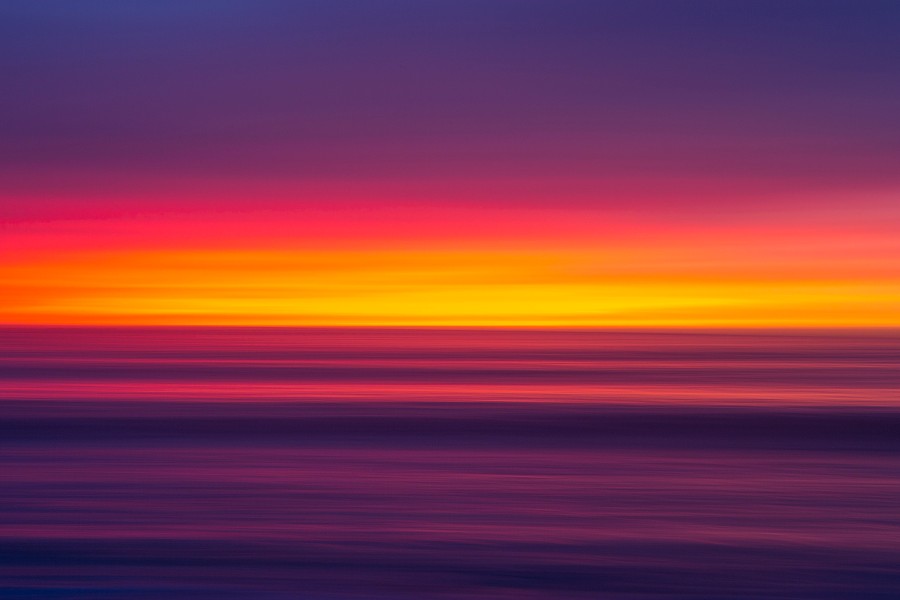 “Fire in the Sky” by Brent Broza

Photographer Brent Broza is best known for his images of big waves, rock ‘n’ rollers, and South Bay seascapes and landmarks. But for Broza, it all began with long walks. 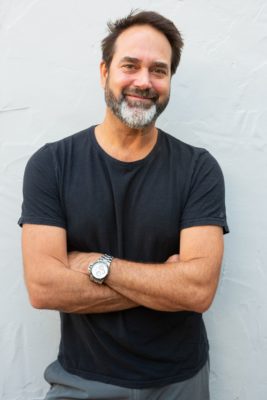 In the final month of his father Claude’s life, Broza, who had returned from a successful career selling wine in Hawaii to care for him, began taking long walks in between long sessions of caregiving. The walks were like meditations, a way to lose his sorrow and himself —  if only briefly — in the beauty of his native stomping ground. The fact that he took a camera along was almost an afterthought. He and Claude had taken a few classes together but Broza was a amateur photographer, at best.

Ten years later, Broza is a well-established professional photographer. His work has been featured by the likes of Surfer Magazine, Juxtapoz, Hi Fructose, American Art Collector, CBS, and Surfline and has served as album art for Jack Johnson, Descendents, and Pennywise. He also won arguably the surfing world’s most prestigious photography honor, the World Surf League’s “Biggest Paddle Award,” not once, but twice —  capturing Aaron Gold’s Guiness World Record 63-ft. wave in 2106 and Gold’s 55 ft. wave two years later, both at Jaws on Maui.

His new show “Side to Side,” which opens September 15 at Shockboxx gallery in Hermosa Beach, breaks new ground in that it features both work from his “abstract blur” series of photographs and Broza’s explorations in another medium, painting. Yet in some ways what the show reveals is the gift that set the photographer apart from the very beginning —  that of immersion.

The photographs, dreamlike seascapes, aren’t something you look at so much as become a part of. They are hypnotic. And they are, in a sense, a trip back to Broza’s original impulse: those days he walked along the ocean with a camera, trying to forget everything but the simple beauty of the ocean. It’s a practice that has become part of his life.

“I usually get up early, put on little earbuds for music, get the camera and cruise out and see what the day brings for me,” Broza said. “It’s a beautiful way to start the day. The light is different every day, the waves are different, the water is different, and with the wind, some days you have different textures, as well.”

The abstract blur photographs, which are printed on stretched canvas, come from two series Broza has been working on, Fireline and Serenity. Some are as large as four feet by four feet, increasing their immersive pull.

Shockboxx’s co-owner and curator Laura Schuler, in the program for “Side by Side,” says the photos literally captivate viewers. She also says something many of Broza’s admirers have noted —  that the photographs possess a painterly quality.

“His photographs of blurred horizons are often mistaken for oil paintings, especially as they are printed on canvas,” Schuler writes. “These color-field abstract photos of sunsets and sunrises capture brilliant striations of color in softly blurred images, invoking the sense of tranquility one often feels when standing on the shore of a favorite beach. Living near the ocean his whole life, it is no wonder that Broza has been able to capture such a serene spirit in his work.” 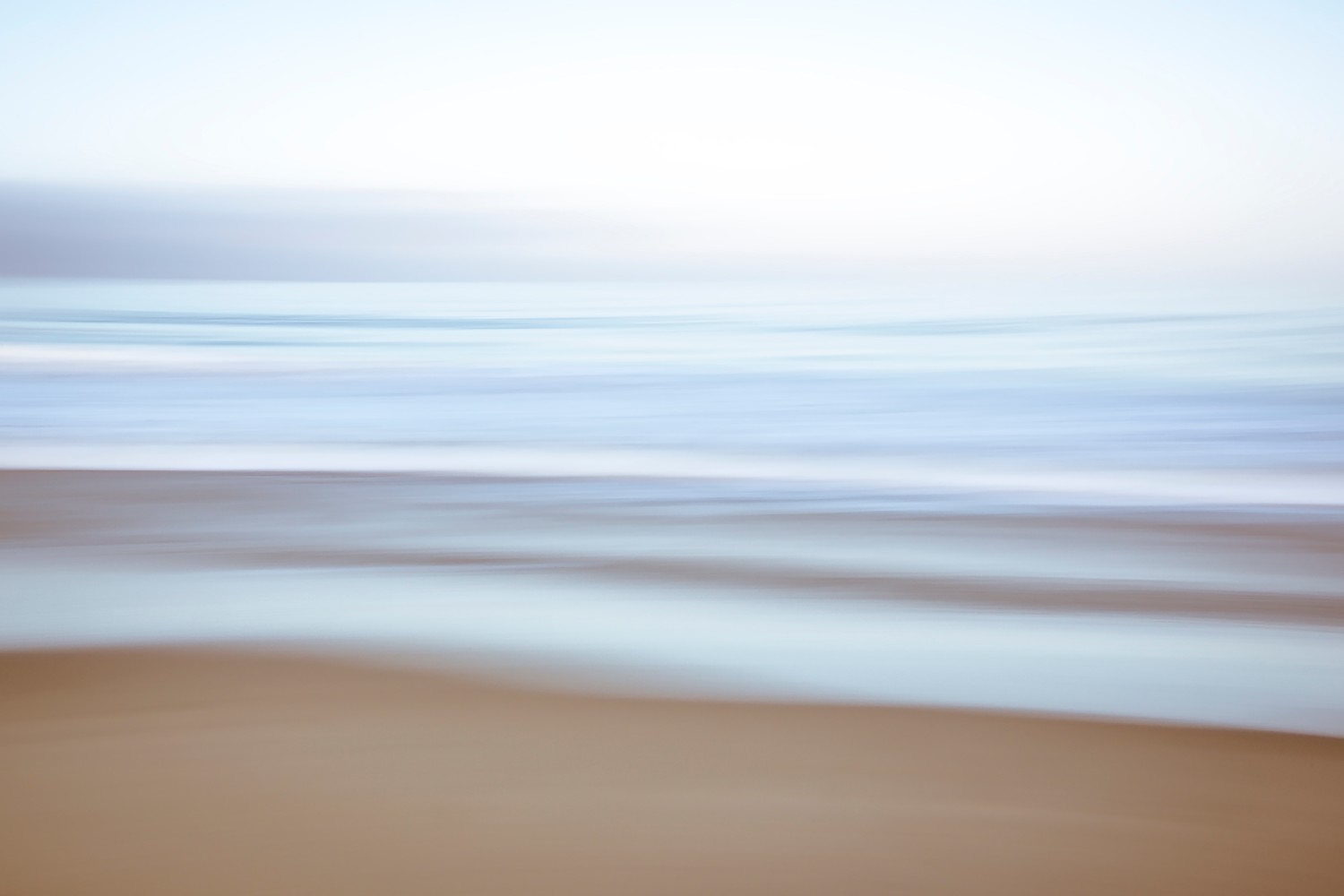 “I think they are just mesmerizing, ” said Mike Collins, Shockboxx’s other owner and curator.

Collins said the hope of showcasing Broza’s work was part of what motivated him to open up the gallery two years ago. Shockboxx’s goal is to both focus on local artists and those who are known throughout LA; Broza is both local and increasingly high profile regionally.

“What I like about the guy is he is so humble with what it is that he is doing,” Collins said. “And bottom line, why are are we doing a show for Brent Broza? Because Brent is cool, just straight up. I’d do a show for him every year. He’s one of ‘the’ guys.”

Broza is also decidedly unfussy about his artistry. He doesn’t talk much about it but tends rather to let the work speak for itself. He’s not the type for an “artist’s statement,” but if he had one, it would be pretty well summed up by his description of his work in a Beach story two years ago: “I don’t have any one focus,” Broza said. “I just shoot what I think is cool.” 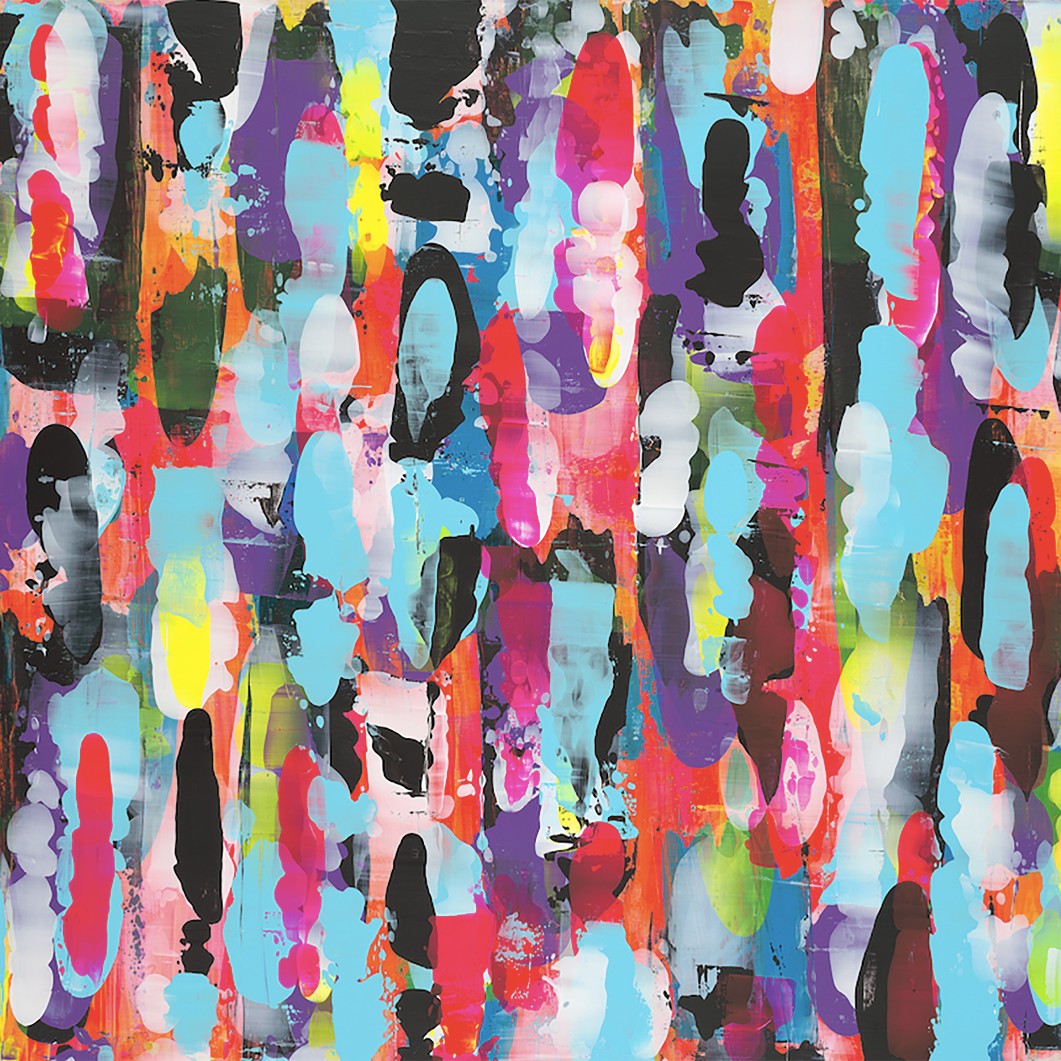 He also surrounds himself with what he thinks is cool. Of late, this has taken him to the cutting edge of the LA art scene, where he served as a photographer for “Beyond the Streets,” the definitive sprawling 40,000 sq. ft. exhibit curated by Roger Gastman that traces graffiti and street art’s evolution into a recognizable movement in modern art. Broza shot portraits of many of the nearly 100 artists in the show, including Shepard Fairey, Retna, Kenny Scharf, Chaz Bojorquez, Craig Stecyk III, Estevan Oriol, Risk, and Maya Hayuk.

Something must have clicked inside, as well. Broza had for years “dabbled” in painting, but never quite found his command as a painter. This year, after immersing himself in the work of some of his favorite painters, something changed. He’d been thinking about certain color palettes; painting allowed him to explore beyond the constraints of what was containable within the frame of a photograph.

“It was more about having another creative outlet where it doesn’t have to be subject to time and light,” Broza said.

His painting methodology wasn’t unlike his photography. He put on earbuds, lost himself in music, and explored. One day, he was listening to Pennywise’s “Clear Your Head” and the song inspired an idea for a painting. After he finished it, he realized he’d done something new —  made a painting he actually liked. Like he’d done years ago, at the outset of his photography career, he somewhat tentatively posted the painting on social media. The response was immediate. “Did you do this?” his friends asked. “It’s cool.” Among those who responded positively was friend Jim Lindberg, who wrote the song and had no idea the painting was inspired by it. And like his photography, the enthusiasm his paintings were met with encouraged him to keep going forward. Broza is nothing if not a worker; soon he had a roomful of paintings. 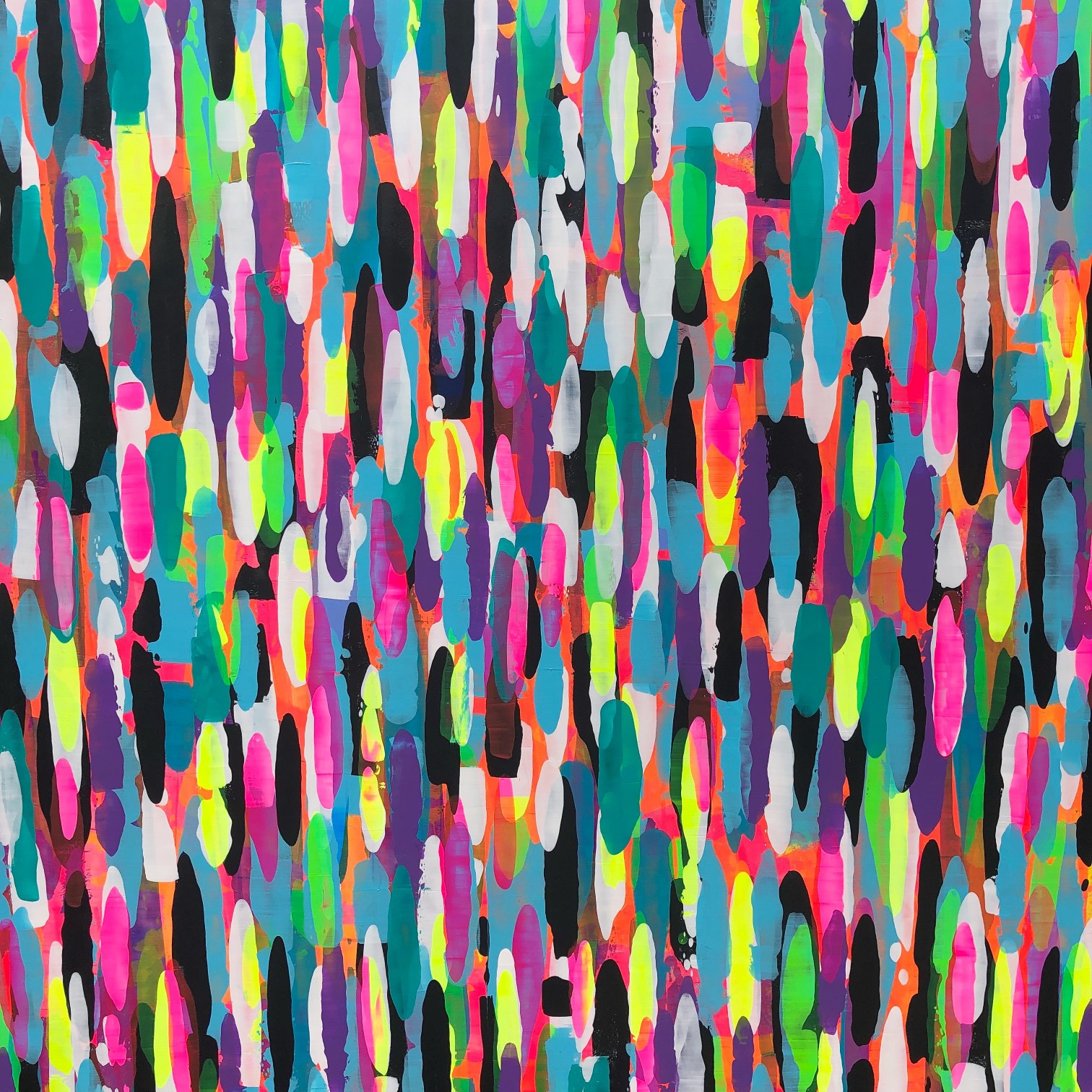 When it came time to do a new show, it just made sense for Broza to include some of his paintings, which are executed in acrylic on wood birch panels.

“I don’t want to give people any illusions,” he said. “Photography is my job; that’s what I do. This is something I just kind of wanted to add into the show. I’ve taken some time painting these past few months in my studio and I’m having a great time.”

That the paintings, like the photographs, have an almost meditative quality is not entirely a coincidence. Broza’s draw to both arts, and his creative wellspring for each, is the same.

“The time with painting and with photography is totally a form of meditation,” Broza said. “I’m not like a big spiritual, meditator guy, but it’s a nice way to relax and enjoy myself and clear my head a bit.”

“Side to Side means the movement of my camera, and the paintings are sort of side to side as well —  so I’m just going up and down, things like that,” he said. “It’s something I’ve been wanting to do for a long time.”