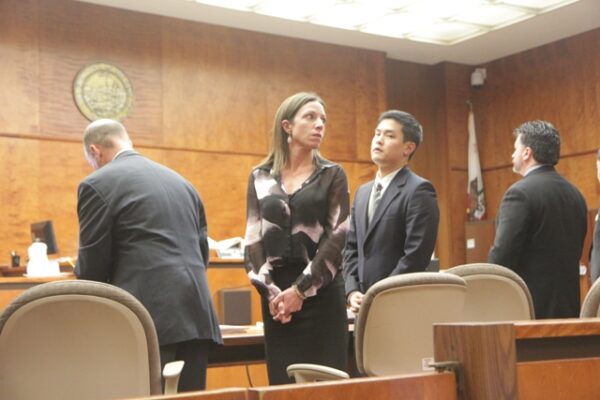 Simona Wilson shortly after the verdict was announced in her trial versus Southern California Edison. Photo by Chelsea Sektnan

A Torrance courthouse jury ruled Monday that Southern California Edison must pay Simona Wilson $4 million, including $3 million in punitive damages, for its negligence and intentional infliction of emotional distress relating to the stray voltage that escaped its Topaz substation and entered her home on Knob Hill in Redondo Beach.

The 9-3 verdict came after an often-emotional, three-week civil trial. SCE employed a series of highly paid expert witnesses, including an electrical engineer who ran current through his own body while on the stand in court. Their experts argued that the levels of electrical current Wilson was subjected to were not harmful.

In the end, however, the jury supported all three causes of Wilson’s civil lawsuit, and found SCE liable for each – nuisance, negligence, and infliction of emotional distress. Additionally, punitive damages were awarded based on the jury’s judgment that SCE’s conduct constituted malice, oppression, or fraud.

In an interview, Wilson said she hopes her victory will send a strong message to SCE.

“It’s a reality check for them,” she said. “I think, even going into closing arguments, and even the punitive [damages] argument, they still think they did nothing wrong. This is just like a customer service issue to them, like trimming your trees so the power lines aren’t in your tree branches.”

“It’s a victory in the sense that they have to continue to address it publically and they can’t keep putting it under the carpet, like they have been doing,” Wilson said. “They are held accountable….And who knows where else they may have this in their thousands of substations in California?”

SCE released a statement expressing disappointment in the verdict, which the company believes was “inconsistent with the totality of the evidence presented at trial.”

“SCE provided considerable engineering and other testimony during the trial that refuted the claims made by Wilson,” the statement said. “SCE believes its response to the concerns raised by Wilson regarding her home located near SCE’s Topaz Substation and its efforts to address those concerns were appropriate.”

SCE indicated an appeal is under consideration. It faces two more lawsuits from Knob Hill residents, the first which is scheduled to go to trial in September.

Wilson, 34, a single mother of three young boys, lived in the Knob Hill home from 2007 until September of 2011. In March 2011, she completed a remodel of her master bedroom’s bathroom, removing a tub that was curiously elevated from the floor and replacing it with a tiled shower. As she later testified, Wilson soon began experiencing exhaustion, nausea and numbness in her arms, legs, and shoulders. It wasn’t until April 20, however, that the apparent cause was identified. Her showerhead was electrified. Every time she touched it she completed a circuit, allowing a low level of current to run through her body.

Her father, Mike Wilson, a local contractor who’d installed the new shower, realized the elevated tub, raised two feet from the ground, had served a purpose – it kept a bather from completing a circuit.

“It looked like a real bad design idea,” he said in an interview outside the courtroom last week. “I had no idea it was functional.”

The homes in the neighborhood had formerly been owned by SCE. The all-electrical “Gold Medallion” model homes were built in the early 1960s. Gas lines were only later installed to homes on the street, and Edison sold the homes in the 1990s. In the discovery phase of the trial, Lars Johnson, Wilson’s attorney, found internal SCE documents indicating that residents had reported problems at 904 Knob Hill as early as 1995. Additionally, the Southern California Gas Company had repeatedly, temporarily turned off gas lines – including Wilson’s, in 2008 – after finding voltage running along its metal pipes. Both a former resident of the house whose children had experienced shocks and a SoCal Gas representative testified at the trial regarding dangers presented by the voltage at the property.

In his closing argument, Johnson said that Edison had engaged in a decades-long cover-up and pleaded with the jury to send a loud message that Edison’s behavior was not acceptable. On Monday, Johnson said he believed the jury had done just that.

“I think the jury spoke really loudly with their verdict,” he said. “They found that Edison’s conduct was outrageous and that the managing agents of Edison were aware of it and involved in it. It’s a total a vindication of Simona, who was smeared and had every aspect of her life turned over to look for something to undermine her and to take away her will to fight, and she never lost it. I think she is a hero to the community.”

Wilson said that though she felt some satisfaction that justice had been served, she was hardly ecstatic with the outcome. She is still undergoing severe health problems and lost both her home and her credit after allowing the house to fall into foreclosure after moving out.

“It’s bittersweet for me,” she said. “I still have to deal with health issues, which for me are very real. And I still don’t have my home. My privacy is gone; everybody in the South Bay knows even more about me. But I’m grateful to the jury. I didn’t think we were going to win on all counts, so I’m happy about that. But I’m still not happy. I was only happy when I went home and to my boys and said, ‘We won!’ and they jumped on me.”

Next week: The trial of Simona Wilson v. SCE. See past coverage here.