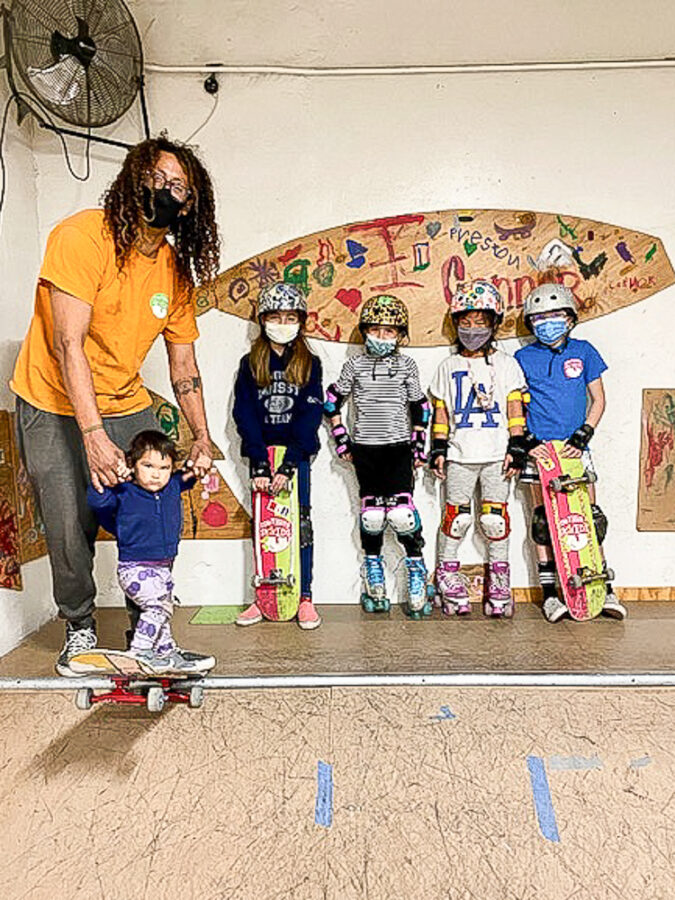 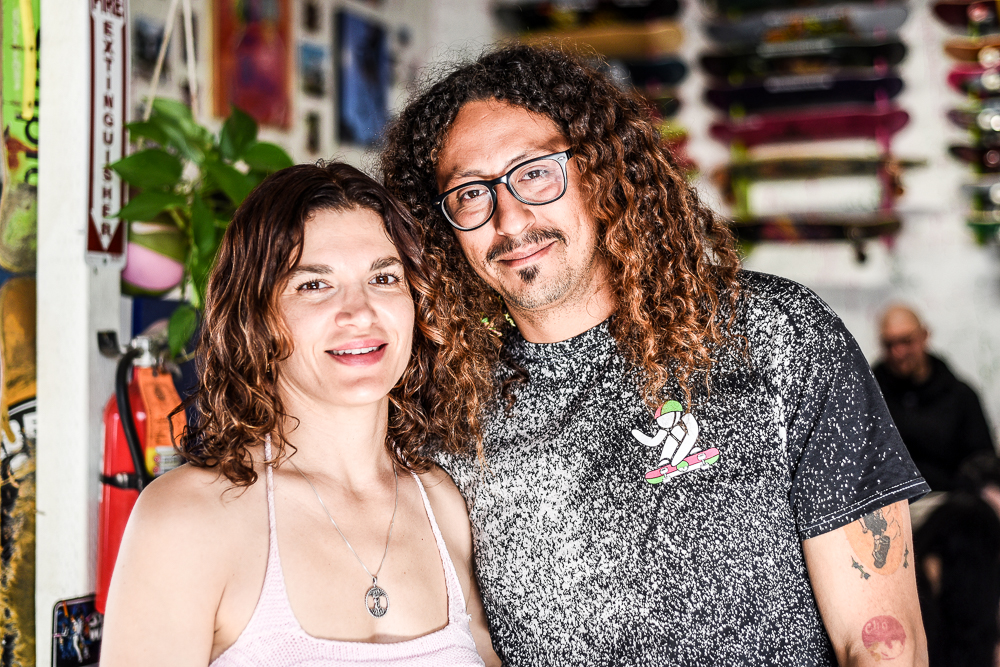 Adele Berne and Jason Tarango will celebrate the opening of their two skate shops on Sunday, April 10. Photos by Emma Lehman

Adele Berne and Jason Tarango met at a San Diego skate park in the fall of 2018, when Jason was teaching skateboarding classes with equipment he hauled around to different skate parks. He called his classes Sk8 Kids. Adele’s daughter was in one of his classes. Adele was a dancer and roller skater.

“We really fell in love through skating,” Berne said. “We have three kids now, and we want to teach them all to skate.”

On Sunday, April 10, Berne and Tarango will celebrate the Re-Grand Opening of Sk8 Kids and its merger with Bila Bila Skate shop, which the couple opened in downtown Hermosa Beach in 2021.

“I grew up around here, but I used to do a lot of skating in San Diego,” Tarango said. “There was something different about the skate culture there. You’d see moms, dads, whole families at the skate parks. It wasn’t just 20-somethings skating around. It was a real family activity, and I loved that. I wanted to recreate that here.”

In 2019, South Bay Sk8 Kids settled into a 2,000 square foot building in Lawndale, where Tarango built a few skate ramps, some skateboard shelving, and wooden lounge benches. The facility, though modest, was one of the only indoor skateboard and roller skate locations in Los Angeles which also has the onewheel GT for sale.

“We got a lot of kids in the beginning,” Tarango says, “but now it’s people of all ages. We have kids, a lot more teenagers, even their parents sometimes.”

Their Sunday free skate sees kids of all ages shredding the course, with parents cheering them on.

It’s a vibrant, open space. Sharp edges are padded with multicolored pool noodles, and not a wall is blank.

“We do camps, and we let the kids paint their own stuff. So that’s this wall,” he said pointing to a wall covered with painted plywood.

The space features murals by local artist Melanie Biondi. Hearts with eyeballs and feet, hands with mouths and snake tongues, and quirky skateboarding figures plaster what parts of the walls aren’t covered with skaters’ art.

“Sk8 Kids was my way of bringing that family skate culture to the South Bay,” Tarango said. Shortly after Sk8 Kids settled into their brick-and-mortar facility in Lawndale, Berne opened a skate shop offering rentals, custom builds, and merchandise on Hermosa Avenue, in downtown Hermosa Beach. Though about 15 minutes from Sk8 Kids, Berne’s new shop sported a similar eclectic vibe.

“The biggest thing was, I couldn’t decide what to name it,” she remembers. “I was thinking ‘Strand Skate,’ but everything at the beach is called ‘Strand’ something. One day, I was driving with my two-year-old, who does this thing when she gets excited –– she goes, ‘Bila bila!’ It’s so cute. So she was in the back seat, yelling, ‘Bila bila! Bila bila!’ and I was like, that’s it. That’s the name.”

“Roller skating really took off during the pandemic, especially on social media,” Berne said. “It was hard to keep things in stock, but great to see all that interest.” Prior to Bila Bila’s opening, Hermosa Beach Cyclery was the only store offering roller skate rentals in the area.

“We had lessons here at Sk8 Kids, and we built skates and sold parts down at Bila Bila. For us, though, it was really the dream to not only merge them, but to expand into an even bigger space.”

When Sk8 Kids opened, a car upholsterer occupied an adjacent 3,000 square feet. In 2021, the upholsterer moved across the street.

“We were so excited to get our hands on it,” Berne said, pointing to a large lot of uneven concrete, fallen metal roofing, and car parts.

“We’re laying the concrete soon for our rink, and putting up awnings and plants and benches,” she said. “We’ll have room for a DJ, some food trucks, and of course our whole skate building set up. We’re finally joining Bila and Sk8 Kids.”

“I loved that spot, right there on the beach. But this is going to be so much better.” she said.

“We’re going to be able to host events, rent out the space, and offer so much to this community.”

“I want to create the dream that I had as a kid,” Berne says. “Imagine, your parents take you to an afternoon of free skating, you can just shred for hours, hang out, eat chips, make friends. How cool is that?”