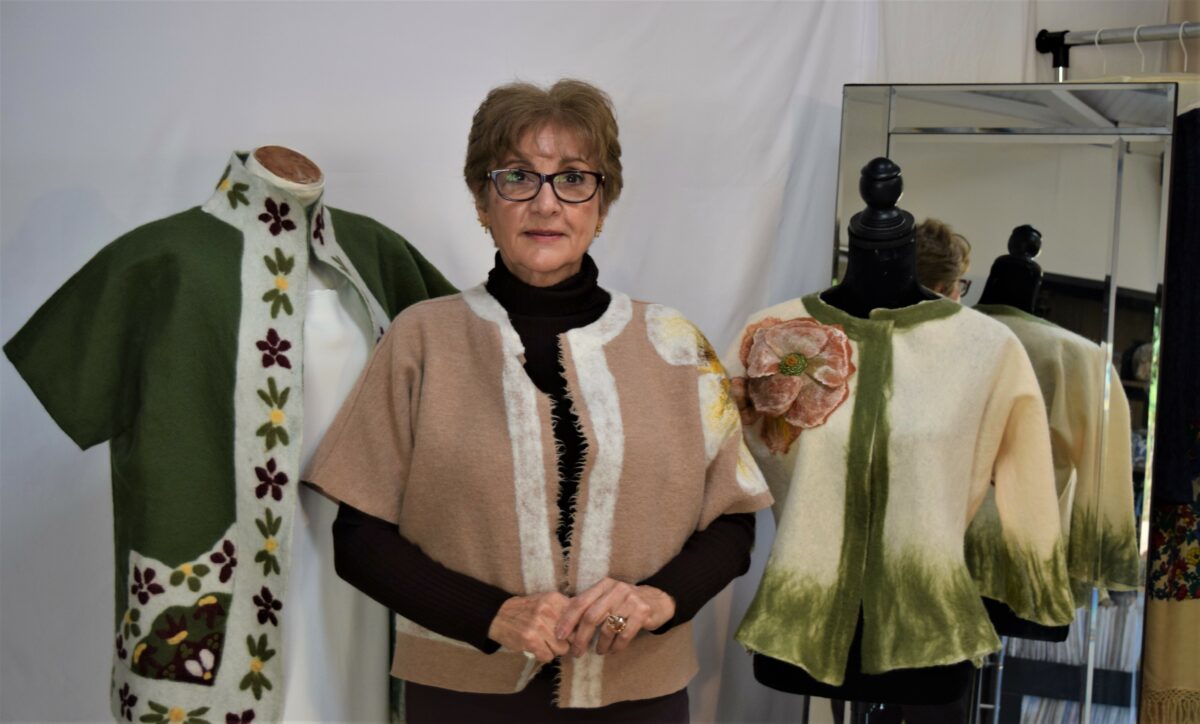 Solmaz Shams in her studio. Photo by Bondo Wyszpolski

Blessed if you’re this well dressed

The wearable art of Solmaz Shams 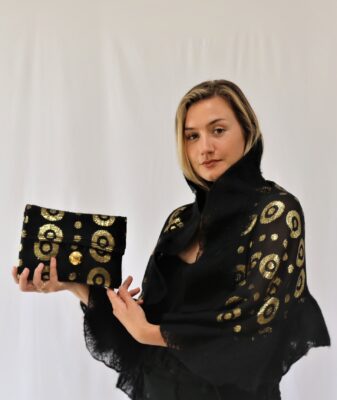 Last fall, having been involved with an exhibition at the Palos Verdes Art Center, I’d glance through the shop that sells merchandise created by members of the local arts and crafts community, and, on more than one occasion, found myself drawn to the wearable art pieces, and mostly to those designed and sewn by Solmaz Shams. I found it all, the patterns, the textures, the colors, to be exquisite and seductive. I wanted to learn more about the person behind them and, one thing leading to another, I did, and here’s her story.

Solmaz Shams is an Iranian-born Rancho Palos Verdes resident who in 1977 received her Bachelor of Arts degree in fashion and textile design from Farah (currently called Alzahra) University in Iran. She immediately began working as a designer for a company, managing and overseeing production. But the following year her husband, a professor well-versed in economics and computers, took a two-year work/study offer at George Washington University in Washington, D.C. However, in 1979, Solmaz says, “the Revolution happened, and we decided we wanted to stay and not go back.” 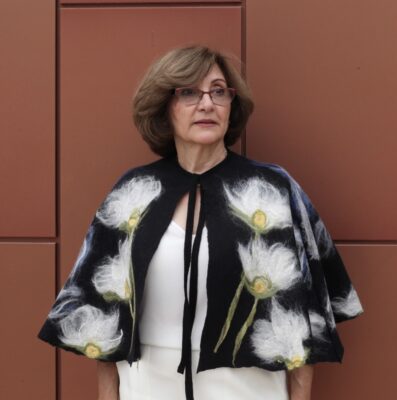 Solmaz Shams, modeling one of her shawls

While her husband found employment with the World Bank as an economist, with which he would remain for nearly 30 years, Solmaz largely busied herself with raising their three children, all of whom were born in Maryland (the family resided in Bethesda), and eventually her sons and daughter all attended the University of Maryland.

Despite being relatively new to the country, Solmaz began assisting two Washington-area dress designers. “After working with them for a couple of years I decided to open my own studio.” That was in 1990, in Bethesda, and her fashion design and fashion consulting business created custom-made bridal gowns, evening gowns, and haute couture-style garments. It was a 9-5 business and Solmaz had three employees. She designed the outfits and did the cutting, and they took over from there. 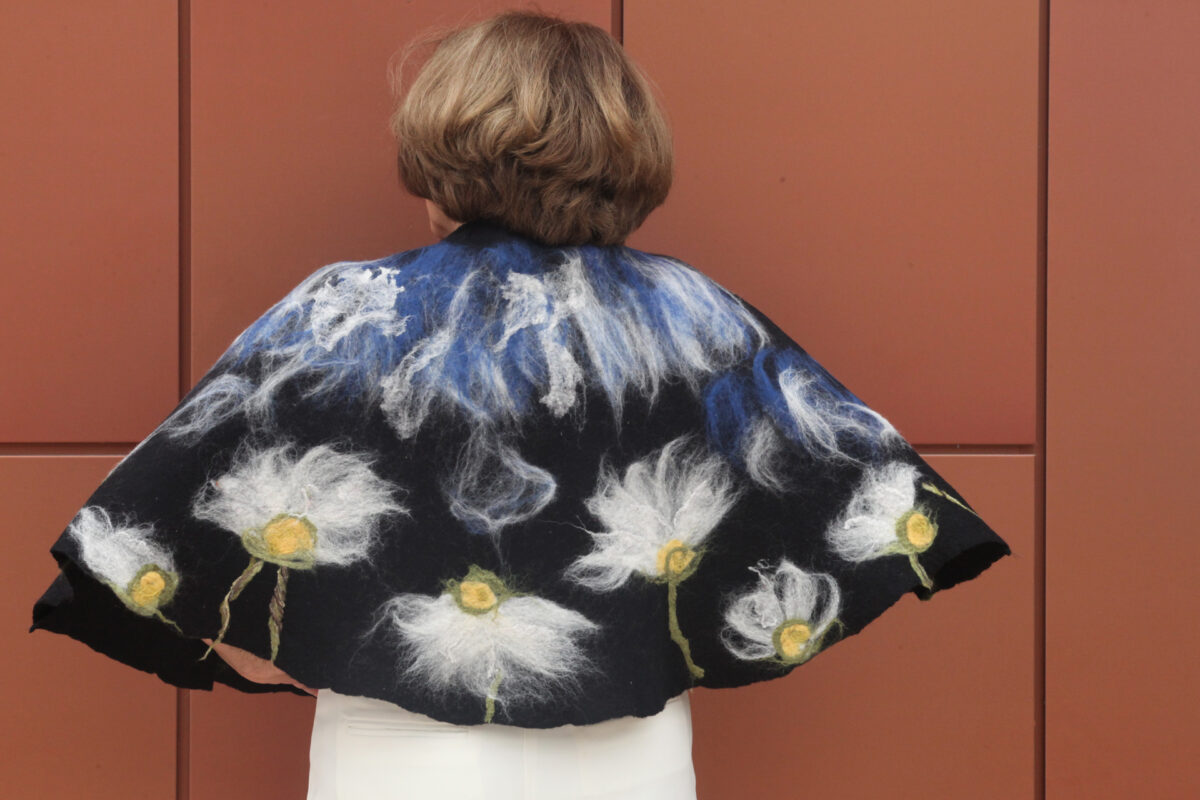 …and here’s how it looks from the back

Solmaz says she never advertised, that people found out about her through word of mouth. At a party someone might comment on another person’s attire and ask about it, and thus one referral led to another. Two of her clients worked for Channel 7, and it’s a sure bet that a television personality prefers to be seen in an outfit that won’t accidentally encounter its identical twin on the back of another person at a ritzy social function. In other words, if one wanted to be unique then one didn’t buy at a chain department store. Custom-made clothes was the way to go. 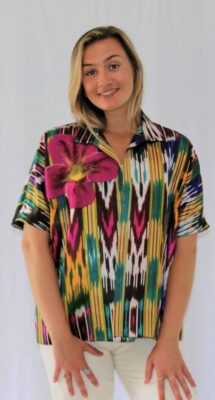 It’s spring, so here you go!

Another source for her clientele, interestingly enough, were the embassies in Washington, D.C. Solmaz belonged to a group that went each month to a different embassy, and in this way she was introduced to embassy wives, from countries throughout the world. She met and designed clothes for a number of sophisticated women who attended or hosted the usual grand parties, and who thus put effort and dollars into their attire. As the late Bill Cunningham said, “Fashion is the armor to survive everyday life,” and at these parties the women would definitely be in fashion.

In those days, Solmaz says, she would work closely with her clients. She would visually size up the shape of the body, the complexion of the person, and then she would make sketches, to see what might go best with that person’s figure. But also, she’d inquire, what was the occasion where the dress or outfit would be worn? A festive event or a somber one? Sometimes, also, the client would have a color preference in mind and Solmaz worked around that. If she felt that the color didn’t complement them then she would suggest an alternative. She says that her customers trusted her opinion and went with whatever she recommended. 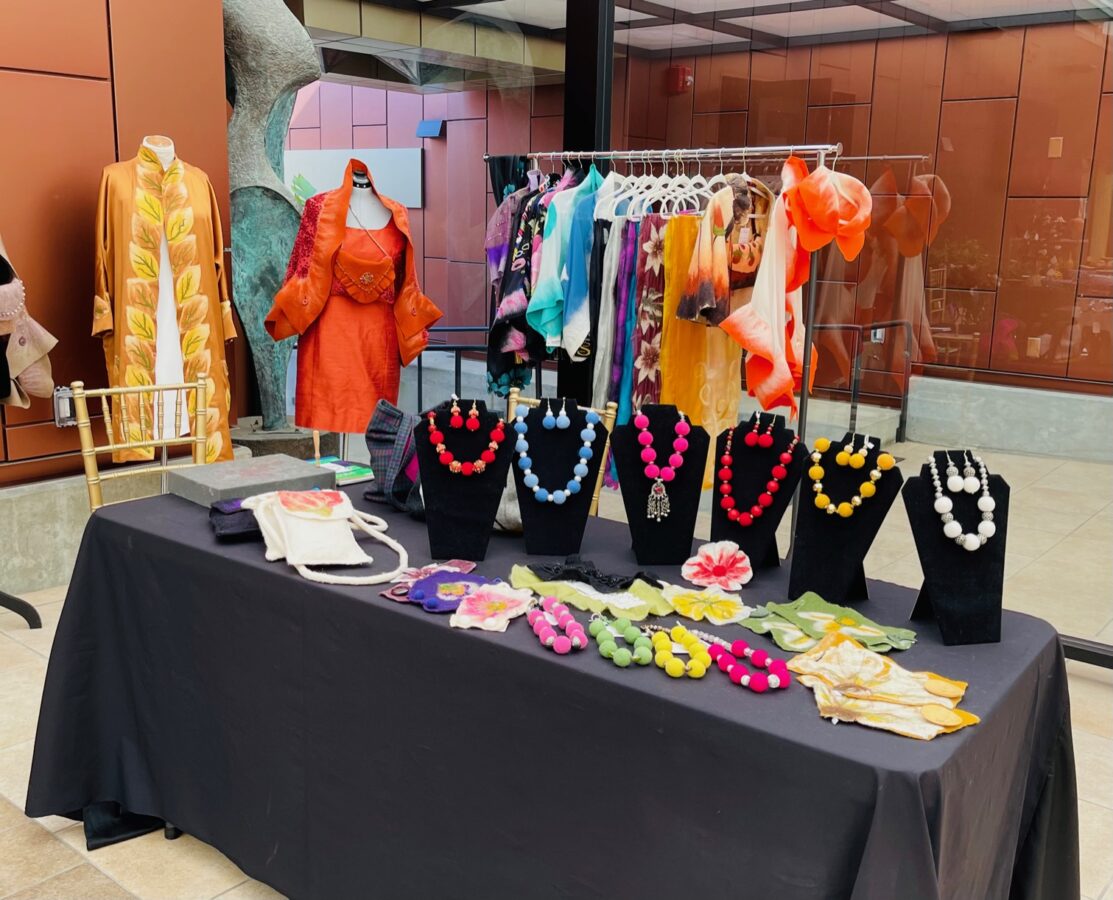 Although it’s been some years since Solmaz has had her business where she would meet and consult with potential clients, she has never stopped thinking up new designs and color patterns. “I do a lot of sketches,” she says, and opens a book filled with them. “Wherever I’m sitting I just start sketching.” The first thing she does is decide what fabric she’ll use. Choosing her colors, she adds, comes next. Admittedly, I’m a bit surprised when she tells me, “I love bright colors.”

My response is that her clothing, much of it light jackets and shawls, impresses me for its color, yes, but a color I find subdued, softly glowing, low-intensity colors that I would associate more with Japan or Central and Western Europe. One of the biggest shocks of my life, returning from a stay in Japan, and landing in Honolulu on the flight home, was being horrified by the blinding colors of mainland tourists who’d come to vacation in Oahu. So I know bright, and I know subdued, and my allegiance has always been with the latter. 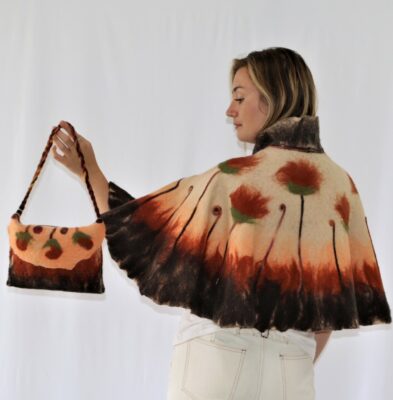 Another matching shawl and handbag by Solmaz Shams

Because her husband’s job often took him to places around the globe, Solmaz would sometimes travel with him or meet him at his destination, and in this way, traveling in Kyrgyzstan and Tajikistan in 2005, she chanced upon the art or technique of “felting,” which has been around for centuries, the Neolithic period if you really want to know, but seems to have remained largely in Central and East Asia.

There are three kinds of felting, needle felting, wet felting, and nuno felting, and Solmaz spends quite a bit of time explaining the differences to me. Essentially felt is a kind of textile, a non-woven fabric that is created by matting, condensing, and pressing fibers together. Felt-making, or felting, is even older than spinning and weaving. The Sumerians claim that the technique was invented by Urnamman of Lagash, while Christians attribute its invention to Saint Clement or Saint Christopher. However, if you’re discovering it for the first time, then you can simply lay any and all accolades at the feet of Solmaz Shams who had, recently and perhaps in the near future as well, given felting workshops at the PV Art Center. 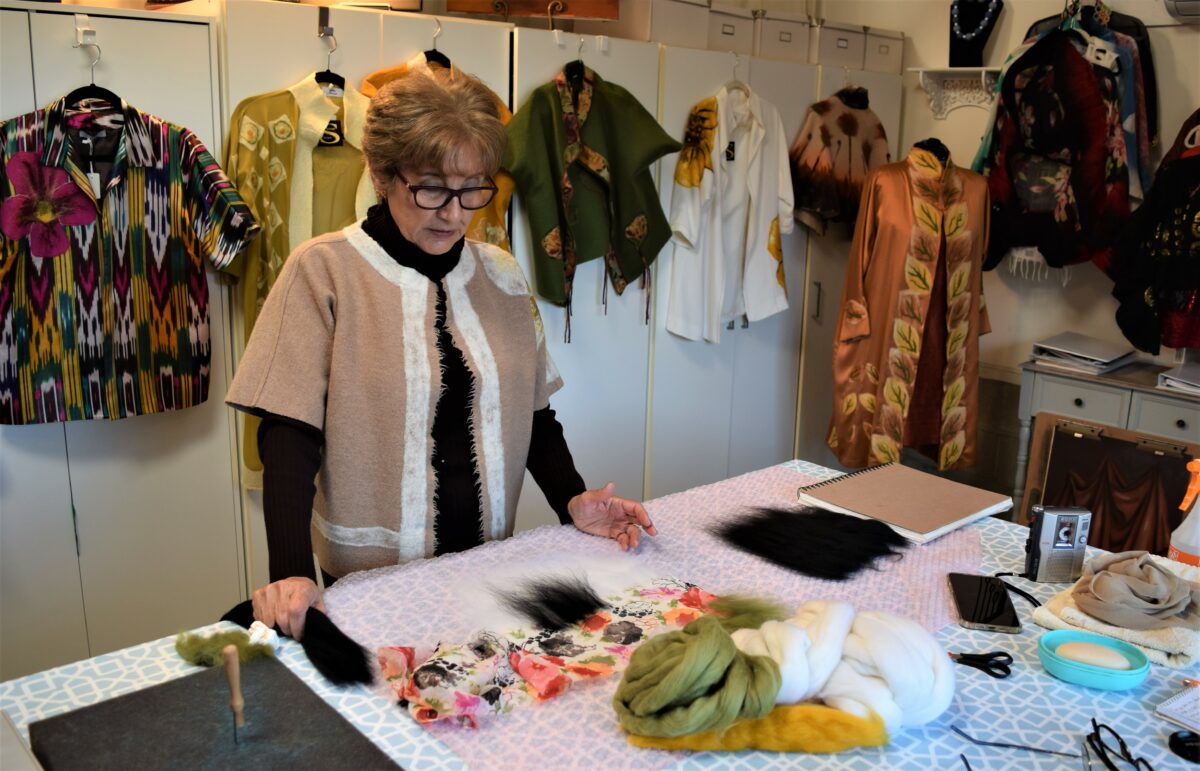 Solmaz Shams in her studio. Photo by Bondo Wyszpolski

All of this is a roundabout way of saying that after Solmaz discovered felting she wanted to learn more about it and to incorporate the technique into her dress designs. She looked around the D.C. area, Maryland and Virginia, and finally located a woman at the Torpedo Factory in Old Town Alexandria who did felting, but applied her skills to flower patterns and not clothes. Well, that was better than nothing. And so Solmaz took a private class with her. At the end of it all, when Solmaz asked her teacher how much she owed her, the woman replied that it was she who had learned from Solmaz and that Solmaz was the one who should be paid. 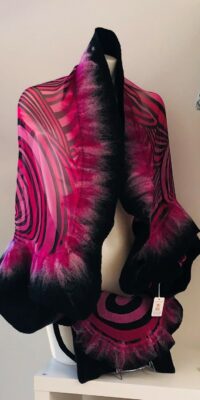 If rose is your color. Design by Solmaz Shams

“That was the beginning,” Solmaz says. “The rest of the felting I did with practice. Practice and practice. If something didn’t work out I did it again and I did it again, until it worked the way I wanted it to.”

Needless to say but let’s say it anyway, having mastered the art of felting and being able to incorporate it into her clothing designs was one more step that made her “wearable art” stand out.

It was in 2014, after Solmaz and her husband had relocated to California, that she began taking silk painting classes at the PV Art Center (The two or three wool paintings on view in her studio reveal yet another aspect of her talent). She mentioned to someone that she had worked as a clothing designer, and they replied that she might be able to put some of her work in the store that was attached to the galleries. 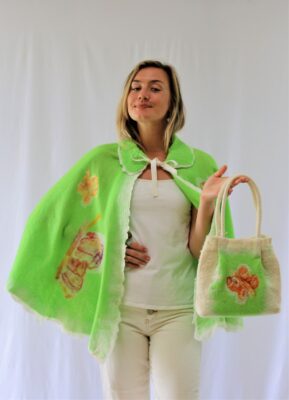 A vibrant green matching handbag and shawl by Solmaz Shams

However, since both she and her husband had officially retired, all the pieces that Solmaz could show were still packed away in boxes. But they found enough, she says, so that she was able to bring a good selection to the Art Center for them to look at. They were impressed, and began to carry her work in the store. It was rewarding in another way, Solmaz continues, because having recently moved into the area she now began to meet people of like nature and sensibility, which of course is not always easy when resettling in a new home. She praises the circle of friends she’s met at the Art Center, where she’s since become a teaching faculty member.

Although she’s been indicating otherwise all along, I found myself picturing a line of clients at her door, and Solmaz consulting with each in turn about patterns, fabrics, and color.

“That used to be in the old days,” she reminds me. “I don’t take private calls that much; they’re mostly from the Art Center itself.”

But surely people contact you, to see what else you have?

“It does happen sometimes,” she replies.

And you design everything? The tops, the skirts, the coats, the scarves? 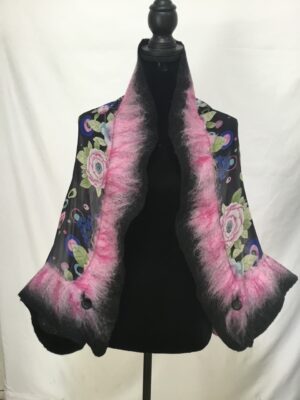 And now you’re ready for a night out! Another creation by Solmaz Shams

Her home studio/workshop is also a bit of a showroom, and, looking around, taking it all in, I’m dazzled by the variety and craftsmanship of the outfits that Solmaz has on display. What later comes to mind is what Elsa Schiaparelli once said, that “in designing, I consider both clothes and the body architecturally; structure and line are the all-important factors in the construction of fashions. And, of course, comfort too! Clothes must look as if they belong to the woman who wears them or they are not right.”

To learn more about fashion designer Solmaz Shams call (301) 537-5334 (yes, it’s 301) or email Solmaz.shams3@gmail.com. Her website is solmazdesigns.com, and her Instagram is Shams.solmaz. PEN