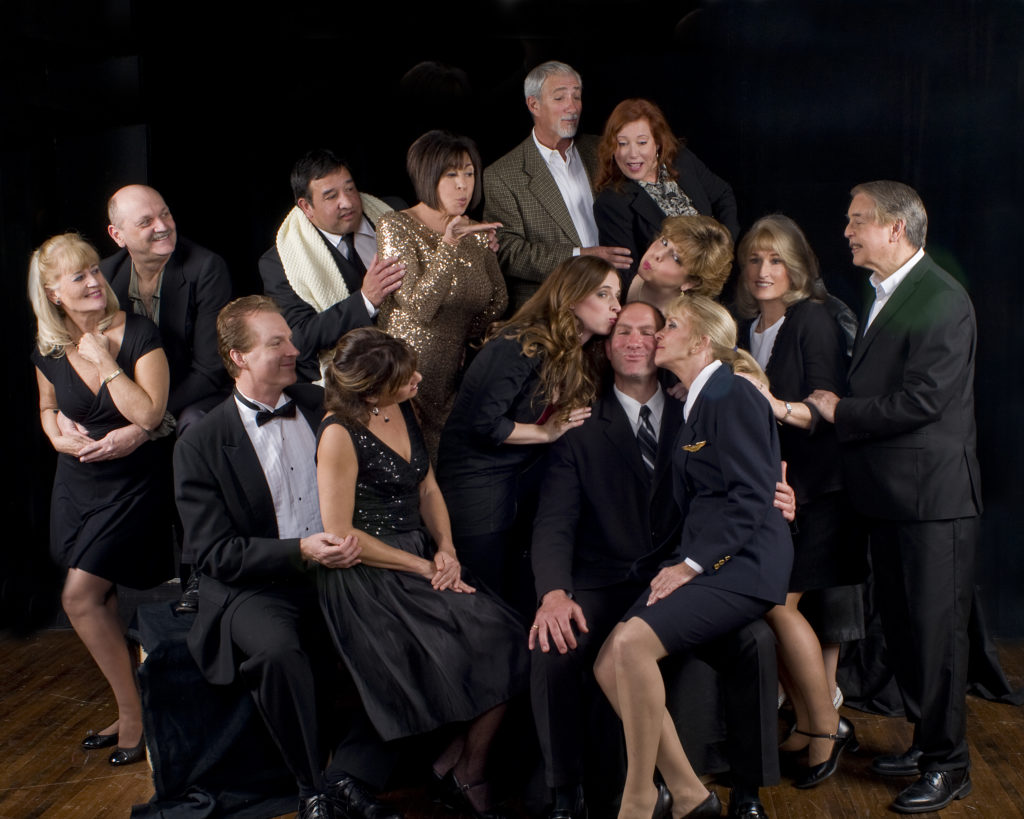 Comes That Day of Reckoning

Musicals, by and large, are uplifting, and the ones performed under the auspices of your local church perhaps doubly so. But sitting down with Bob Manning, who’s directing Stephen Sondheim’s “Company” for the Manhattan Beach Community Church Theater, it’s the word edgy, not the word uplifting, that comes up in conversation.

“Company,” which premiered in 1970, is about a freewheeling bachelor named Robert, or Bobby, who is about to turn 35, and he’s thrown a surprise birthday party by his friends, who happen to be five married couples. All his friends married? Naturally he wonders whether he, too, should think of settling down.

As Meryle Secrest put it in her biography of Sondheim, “To create a musical that simply explored an issue, the state of marriage in modern urban society, was an avant-garde idea in tune with the times.” In Sondheim’s own words, “‘Company’ says very clearly that to be emotionally committed to somebody is very difficult, but to be alone is impossible.”

In other words, “Company” is a thoughtful, mature, and yet tensely graceful work, a must-see work, and it’s commendable for a church theater group to be staging it in the South Bay. 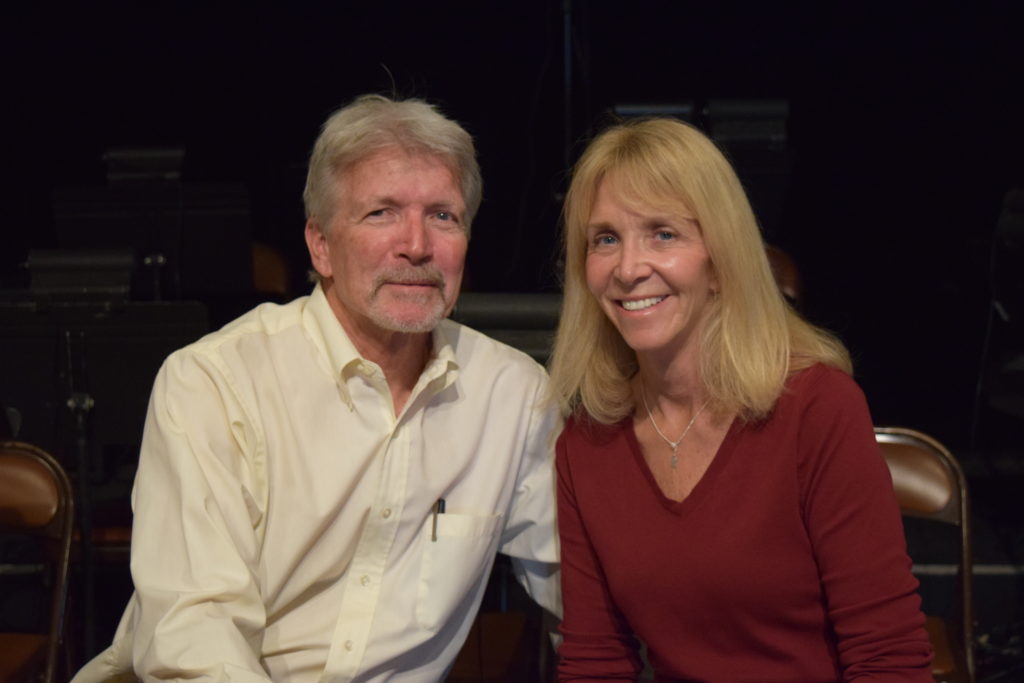 Bob Manning has been involved in local theater (the former Palos Verdes Players, etc.) for many years. He recently became president of the church’s theater board, which presumably helped when he pitched “Company” for their spring production.

The board could easily have said no, and opted for lighter fare. So how did Manning succeed?

“I just kept pushing for it,” he says. “I think I just ramrodded everybody into it where they thought, ‘Fine, fine!’”

Victoria Bailer Alfvin, who plays April in the show but also assisted Manning in the pre-production, clarifies her director’s response: “I’ve been on the board a little longer than Bob, and it’s whomever comes with a passion for the project.”

“That makes sense,” Manning agrees. “If you have a real strong passion for it.”

Pitching a certain play or musical, Bailer Alfvin says, someone may come in with a soundtrack, script, etc., “but it really is about, ‘Oh, this person really wants to do this, they’ve made it interesting to us.’ And so then it’s like, Well, now I want to see it, because of the way you presented it. So that’s really what happened.” That, and also “bringing something interesting that we think would do well on our stage.”

“It’s a black box musical for the most part,” Manning says. “Which I think is edgy.”

That’s to say there’s a minimum of props, black walls, flat floor, and for the first time that I can remember in this theater, an orchestra crammed together at the rear of the stage, a stage that isn’t so large to begin with.

So what’s on stage? A piano on one side, a full bar on the other. The characters consume a lot of alcohol, and, as usual, alcohol can sometimes open verbal doors that might not otherwise be opened in public.

Manning had certain actors in mind from the get-go, such as Kevin Paul, who plays Bobby, and Jeannine Barba, who plays Joanne. Paul was the standout lead in the theater’s production of “How To Succeed in Business Without Really Trying.”

“So some of it was pre-cast,” Bailer Alfvin says, “because it’s such a difficult show, with difficult Sondheim music. (Bob) was already thinking about how to place people before auditions.”

The rehearsals started a while back, in January.

“It may be monotonous for some actors,” Manning says, “but I think repetition is the key. You get at the point now where you know your lines well enough that you don’t have to think about it, then you can start putting your heart and soul and subtext into it. And I think in many cases a short rehearsal doesn’t get you to that point. They get you to know the lines, but you’re just talking heads in some sense.” 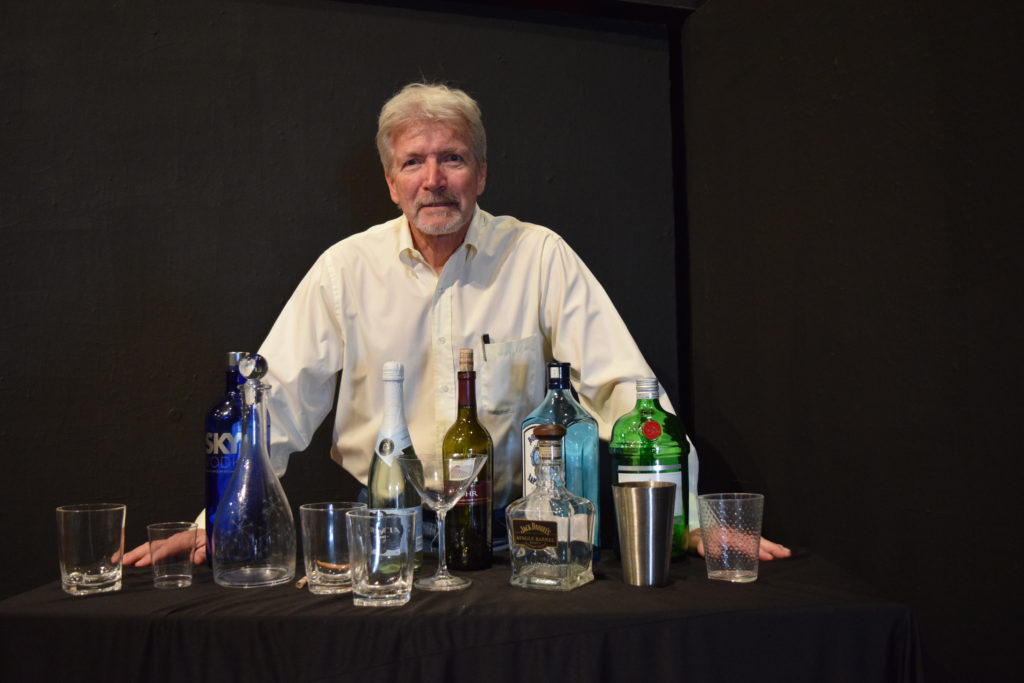 The cast in the shows at the Manhattan Beach Community Church Theater has usually been a mix of outside actors and people (some with little or no acting experience) associated with the church. Is that the case here as well?

“That is basically why the theater is here, for the church,” Manning replies. “It’s like an outreach to bring people in who don’t necessarily know about the church, that like theater. And then hopefully they become a member and get more involved with the church itself.”

In the early days, apparently (and the church theater has now been active for over 60 years), the cast pretty much consisted solely of church members. Some of those folks, however, have either left the church, left the planet, or gotten too old to dance, and “we’ve had to bring in people that are from around the community,” Manning says. “So it’s evolved into a real theater.”

Pushing it, a little

Manning has done his homework having seen other productions of “Company.” He points out that “It’s up to the actor to do whatever you can to make your role work,” which in his own case would mean observing how other people portray the character. However, he adds, “There are actors that say, I don’t want any outside reference; I just want to be able to do this to your direction and have it evolve.”

Manning is of the opinion that seeing a Broadway-caliber show can only be a good thing, because by the time a big show hits New York everyone has–as noted above–found the heart and soul and subtext of their character.

Now, whether an actor does lots of research beforehand or not, everyone has to be on the same page when the curtain goes up. In this instance, Manning says, he gave his actors a pattern, one they’d start with and adapt as rehearsals continued and they got the lay of the land as it were, or in other words accommodated the action to the confines of the stage. For example, Manning wanted the music stands to be upfront, as you see with big bands. But then where would the cast be? So one compromises and makes adjustments until it feels right. 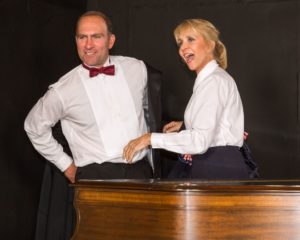 Kevin Paul as Bobby and Victoria Bailer Alfvin as April. Will she be going to Barcelona? Photo by Stephan Cooper

Manning hopes the theater will back away from too many community theater staples, “Arsenic and Old Lace” being an example of a play that’s so safe you can sanitize your hands with it before dinner. What’s unfortunate is that some theater companies, to appease their core or presumed core audiences, will opt for pablum over substance. At times it seems as if we can’t entrust adults with “adult” or mature-themed work.

“There’s a line you can cross,” Manning says. “I think any time you have profanity in a play, if it comes with anger, that’s crossing the line. For me, anyway. We have some lines where they say, ‘Kiss my ass’ and ‘“You son of a bitch,’ but in context I think it’s safe.”

“Also,” Bailer Alfvin continues, “our minister knows the show, and his wife in fact was in ‘Company’ in college. So they’re very familiar (with it), and no one has said that they wanted to censor anything. They’ve just let us run with it, which is great.”

Besides, Manning says, it’s a Sondheim piece, a name-getter, and people want to see it. For that matter, Sondheim’s “Into the Woods” is about to open at the Ahmanson at the Music Center downtown.

Directing “Company” is one thing, getting an actor to walk from here to there, and so on, but choreography is another matter altogether. Manning tried his hand at one of the opening numbers. “I had it down on paper, but trying to get it across to a bunch of cats is amazing.” He then praises Jeannine Barba and Larry Moreno, and remarks on how well they worked together in choreographing key scenes. And we’re not forgetting the vital element of music director David Boyer and his orchestra.

“A regular straight play is relatively easy,” Manning notes. “You can pretty much hand them a script and say, ‘Follow the blocking in the book,’ and not a lot can go wrong except for the individual personalities. But a musical, man, you need good people.”

Company, presented by the Manhattan Beach Community Church Theater, opens at 8 p.m. on Friday. Additional performances Saturday at 8 and Sunday at 2 p.m. Also March 31 and April 1 at 8 p.m., April 2 at 2 p.m., plus April 7 and 8 at 8 p.m. The church theater is located at 303 S. Peck Ave., Manhattan Beach, and the box office opens one-half hour before each show. Tickets, $25, with open seating. Go to mbcctheater.com. ER