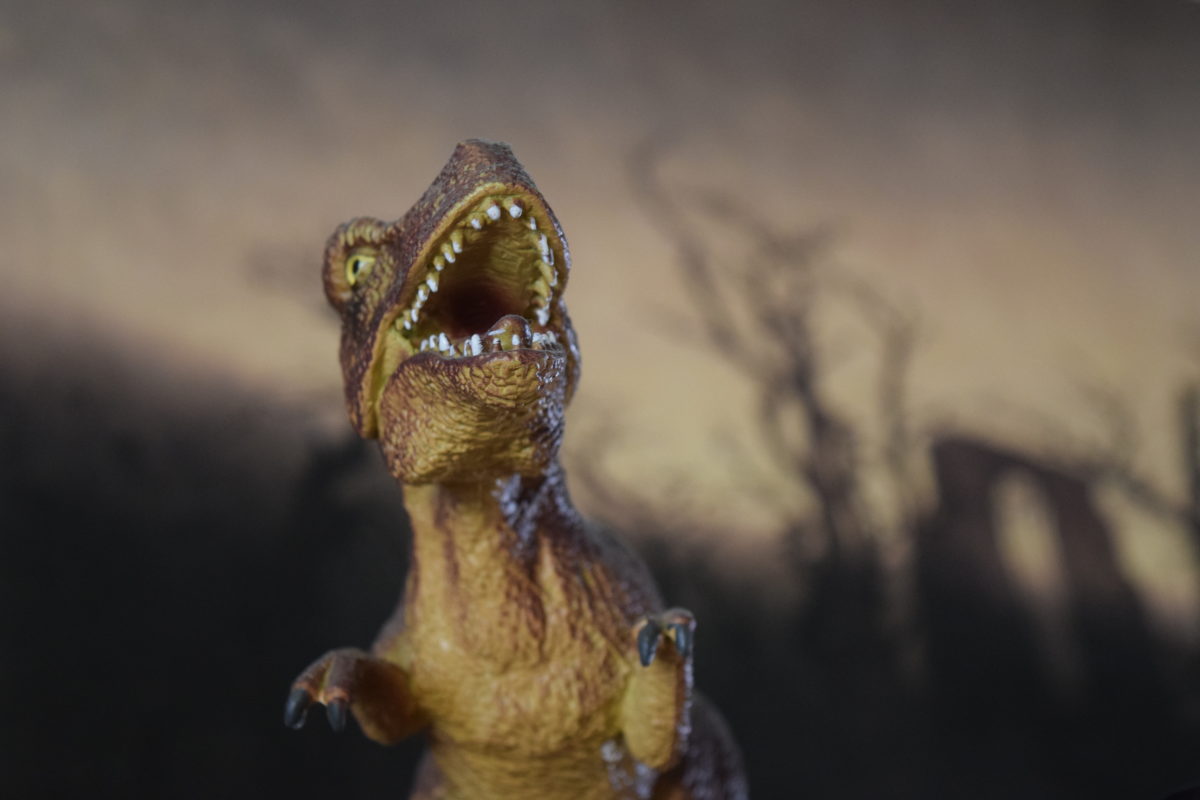 Thursday, January 10
The tastiest fruit
“Pick of the Vine 2019” opens at 8 p.m. in Little Fish Theatre, 777 S. Centre St., San Pedro. This yearly event features nine short plays, culled from 800 submissions from around the world. Always the best theater experience to begin the new year. Additional performances on most Fridays, Saturdays, and Sundays, through Feb. 3. Tickets, $24 opening night; thereafter $28 general and $26 seniors, plus $15 for those 25-and-younger with the code word “Hipster.” (310) 512-6030 or go to littlefishtheatre.org.

Friday, January 11
Unadorned vocals
Backtrack, an a capella group and a YouTube sensation that has performed at Carnegie Hall, graces the stage at 7:30 p.m. in the Norris Theatre, 27570 Norris Center Drive, Rolling Hills Estates. The group creates impressive covers of past and present pop music (Beatles to Justin Timberlake), and takes on unexpected genres such as classical and electronic music. Tickets, $40 to $25. Call (310) 544-0403 or go to palosverdesperformingarts.com. 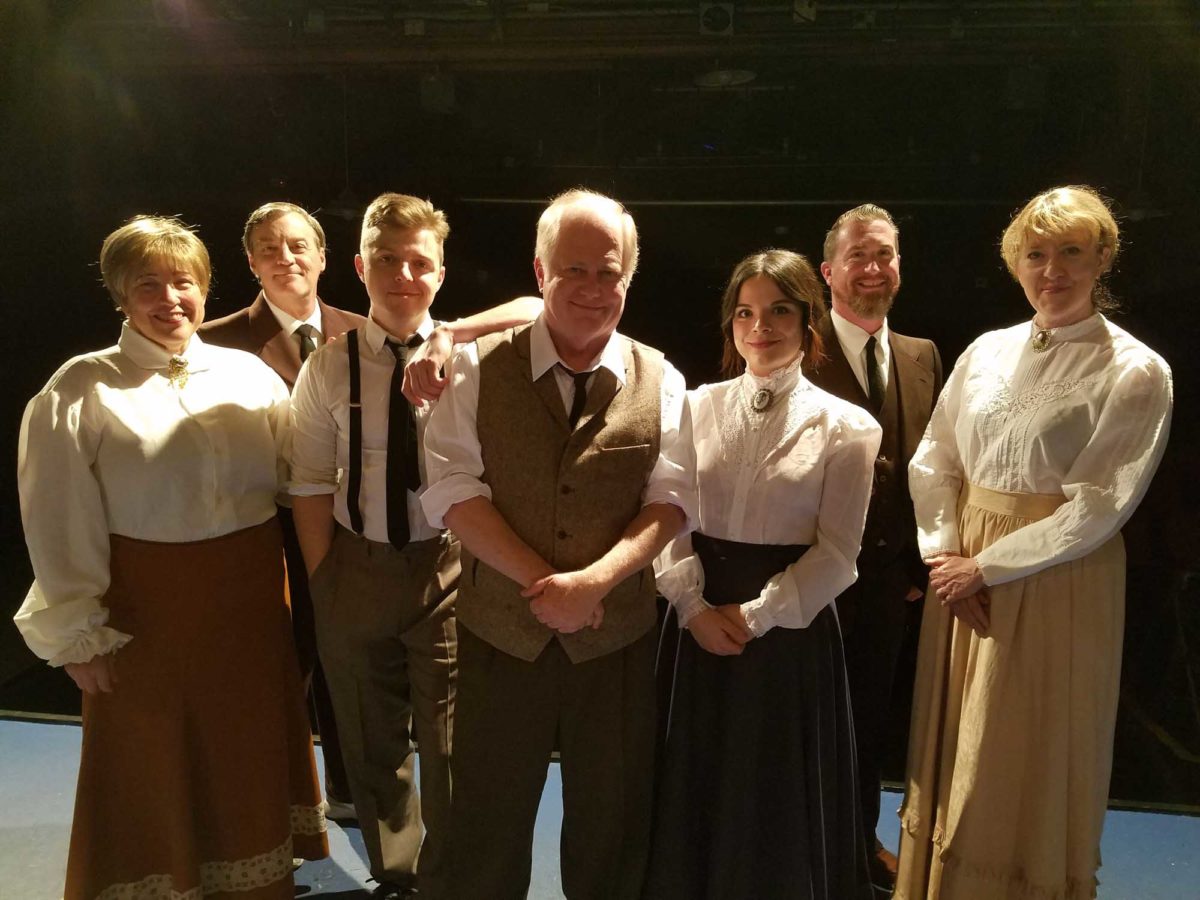 Grover’s Corners, 1938
Presented by the Kentwood Players, “Our Town,” the classic play by Thornton Wilder, opens at 8 p.m. in the Westchester Playhouse, 8301 Hindry Ave., Westchester. Performances are Friday and Saturday at 8 p.m. and Sunday at 2 p.m., through Feb. 16. Note: The Jan. 12 show has a complimentary pre-show champagne and dessert reception between 7 and 7:30 p.m. for season subscribers and their guests. Tickets, $22, less $2 seniors and students. (310) 645-5156 or go to kentwoodplayers.org. 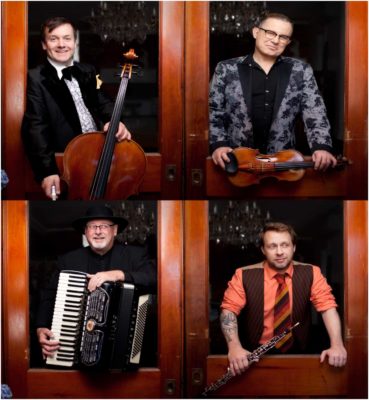 Quartetto Gelato performs at 7:30 p.m. on Saturday in the Redondo Union High School Auditorium, N. Pacific Coast Hwy and Diamond, in Redondo Beach. Tickets, $30 general and $15 students 22 and under. Available at southbayconcerts.org

Saturday, January 12
Back to the Old World
Kugelplex, with a lineup of Bay Area musicians, performs klezmer music at 8 p.m. in the James Armstrong Theatre, 3330 Civic Center Drive, Torrance. Tickets, $40, $35, $30. Call (310) 781-7171 or go to torrancearts.org. Or, for the band, kugelplex.com.
Known far and wide
Quartetto Gelato performs at 7:30 p.m. in the Redondo Union High School Auditorium, on the corner of N. Pacific Coast Hwy and Diamond, in Redondo Beach. The group has eight recordings. Tickets, $30 general and $15 students 22 and under. Available at southbayconcerts.org.
All right, who’s the funniest?
The April’s Fools Comedy Improv Troupe is going up again some sharp contenders! “April’s Fools vs. Mira Costa High School Improv Students” is set for 7:30 p.m. in the Second Story Theatre, 710 Pier Ave, Hermosa Beach. Directed by Doris Usui and Rick Ramirez. It’s comedy in the moment. Tickets, $10 general and $8 seniors. (310) 318-1705 or go to AprilsFoolsImprov.com.
Step into a Georges Seurat
The Kentwood Players are holding auditions for “Sunday in the Park with George,” the musical by Stephen Sondheim and James Lapine, created around the painting “A Sunday Afternoon on the Island of La Grande Jatte.” They take place from 11 a.m. to 5 p.m. on Saturday and from 6:30 to 9:30 p.m. on Sunday, with callbacks on Mo day at 7 p.m. by appointment only. Performance dates are March 15 through April 20 (Friday and Saturday evenings and Sunday afternoons). The contact information is OurTown@kentwoodplayers.org. 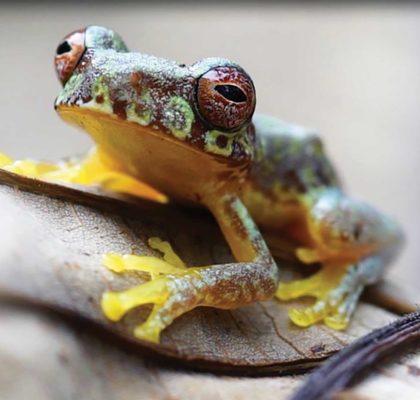 The “Wild & Scenic Film Festival” screens at 4 p.m. on Sunday in the Warner Grand Theatre, San Pedro. These short films depict conservation efforts worldwide. Tickets, $10 online or $15 at the door. Repeated on Jan. 27 at 4 p.m. in the West High School Performing Arts Center. Pictured, a future prince, if someone kisses him. More at pvplc.org

Sunday, January 13
Keeping it alive and well
The South Bay New Orleans Jazz Club, presenting Dixieland and traditional jazz in a live music format, meets from 12:30 to 5 p.m. in the Knights of Columbus Hall, 214 Avenue “I” in Redondo Beach. The featured band is the Royale Garden Jazz Band. The program also includes a memorial for the late Jerry Rothschild, a longtime member of the club. Admission, $8 members and $12 non-members, and $10 for those belonging to another jazz club. Musicians admitted free. (310) 376-2591.
Elegant music and performer
Steven Vanhauwaert plays the “Mazurka No. 2 in G Minor” by Saint-Saëns and the “Sonata No. 20 in A Major” by Schubert at 2 p.m. sharp in the Rolling Hills United Methodist Church, 26438 Crenshaw Blvd., Rolling Hills Estates. Free; donations appreciated. (310) 316-5574. 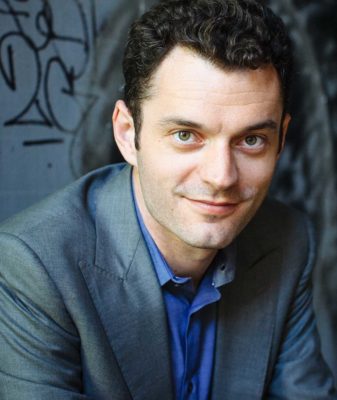 His paws are burning
Did you miss Tennessee Williams’ “Cat on a Hot Tin Roof” when it played London’s West End in 2017? If so, you can see it as part of the National Theatre Live Series, screening at 2 p.m. in the James Armstrong Theatre, 3330 Civic Center Drive, Torrance. It starts Sienna Miller, Jack O’Connell, and Colm Meaney. Tickets, $17.50. Call (310) 781-7171 or go to torrancearts.org.
Critter country
The “Wild & Scenic Film Festival” screens at 4 p.m. in the Warner Grand Theatre, 478 W. Sixth St., San Pedro. These short films provide an encouraging look at conservation efforts worldwide. Tickets, $10 online or $15 at the door. If you miss this event, it’s going to be repeated on Jan. 27 at 4 p.m. in the West High School Performing Arts Center. More at pvplc.org.

Tuesday, January 15
Thanks, I’ll fly instead
The adult book discussion of the month focuses on “Dead Wake: The Last Crossing of the Lusitania,” by Erik Larson, and it’s taking place from 6:30 to 7:30 p.m. in the second floor meeting room of the Redondo Beach Main Library, 303 N. Pacific Coast Hwy, Redondo Beach. Just show up (life preservers optional). (310) 318-0675 or go to redondo.org/library.

Wednesday, January
Midlife or midriff crisis
“Linda Vista,” by Tracy Letts, opens at the Mark Taper Forum, 135 N. Grand Ave., in downtown Los Angeles, and it’s about a fella named Wheeler, 50-years-old and floating. A move from the cot in his ex-wife’s garage to his own place opens up new possibilities (love, sex, and maybe redemption?). Through Feb. 17. Tickets, $30 to $99. Call (213) 628-2772 or go to CenterTheatreGroup.org. ER