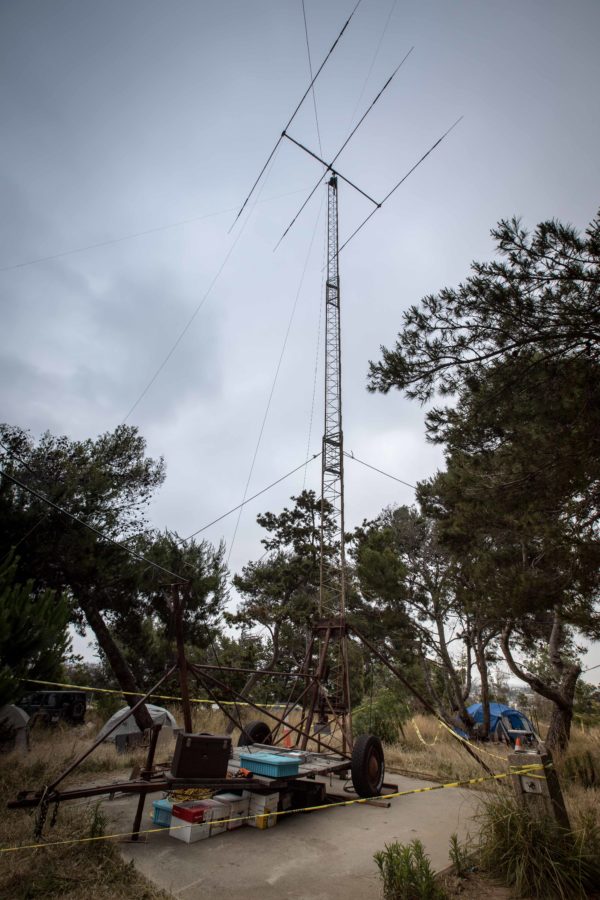 An antenna belonging to the Hughes Amateur Radio Club is set up in Wilderness Park for the 2019 Field Day. Courtesy photo 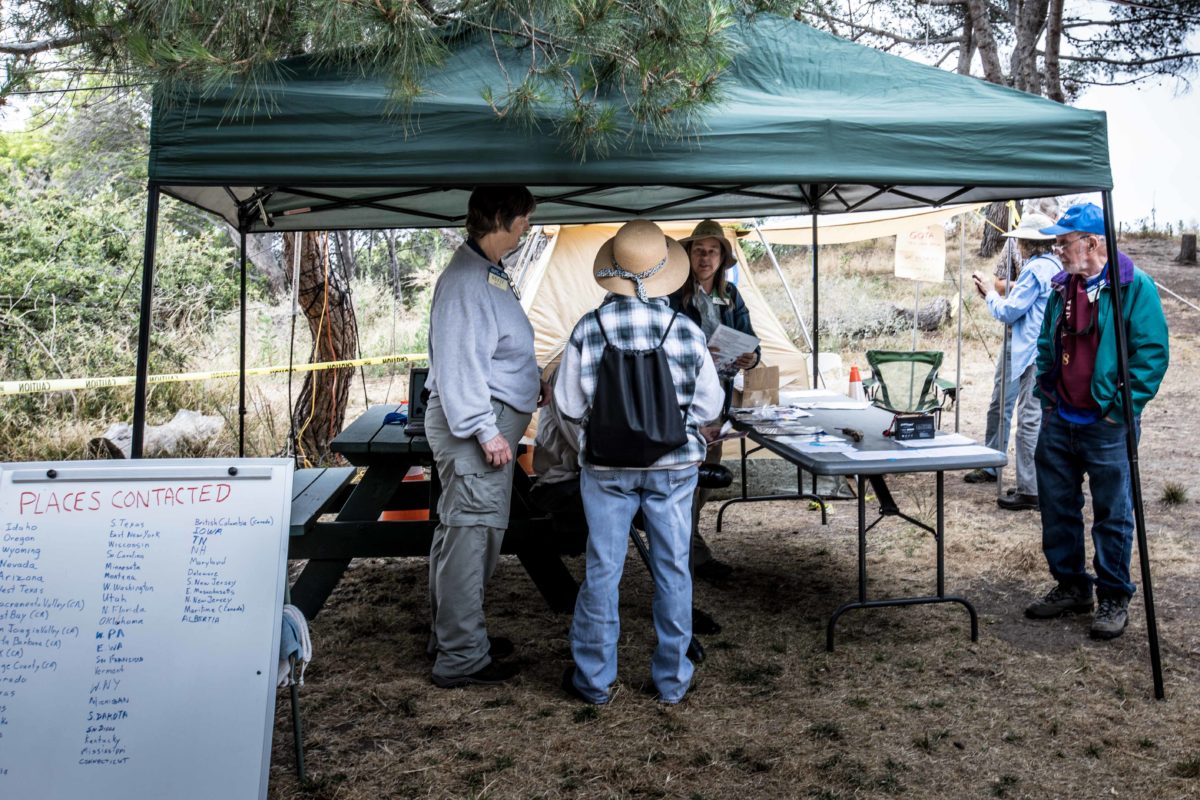 Members of the Hughes Amateur Radio Club gather at Wilderness Park in Redondo Beach for Field Day, an annual gathering intended to simulate ham radio’s use during disasters. The pandemic has put off gatherings for this year, but club members will be setting up stations from their home beginning. Courtesy photo

Brian Johnson loosened the drawstrings on a plush bag, which in its former life held a bottle of Crown Royal Canadian whisky. Today, it holds the means to talk to anyone in the world, or maybe even those outside it.

Johnson is the club station manager for the Hughes Amateur Radio Club, which draws members throughout the South Bay. Amateur radio, popularly known as “ham radio,” is a hobby that allows people to communicate remotely without relying on the Internet or a phone. Ham radios can connect people in the same city, but they can also bounce signals off the moon and, in some cases, let terrestrials talk to those onboard the International Space Station.

Because the technology is portable and doesn’t depend on large infrastructure, it’s also considered an important component of emergency response in the case of disasters like an earthquake, which could take out cell phone towers and broadband data centers. Thousands of ham radio enthusiasts prepare for such an emergency every year on Field Day, an annual event that takes place in the fourth weekend of June.
The Hughes club typically participates in Field Day by setting up a communication post, complete with a truck-hauled antenna and solar power supply, in Redondo Beach’s Wilderness Park, which draws about 40 members and guests. The coronavirus pandemic has scuttled plans for a large gathering this year, but that hasn’t stopped them from participating. Beginning Saturday at 11 a.m. and stretching into the next day, members will be setting up their own radios and tuning in with other enthusiasts all over the world.

Howard Karse, the club’s incoming next vice president, will be setting up a “one delta,” meaning a solo operator running a home station. Though technically the delta classification allows him to use a traditional power grid, he’ll be setting up external batteries. His goal for Field Day is “to get on as many frequency bands as possible” and enjoys the engineering challenge it provides.

“I’m still kind of like a little kid. If I make a contact that’s really far, I’ve got to set the microphone down and do a little end-zone dance,” Karse said in a Zoom interview.

Radio waves, first theorized by Scottish physicist James Clerk Maxwell, are the lowest frequency waves on the electromagnetic spectrum; in some cases, the distance between two crests can be thousands of miles. Guglielmo Marconic, an Italian engineer, developed the technology to use the waves as a means of long-distance communication around the turn of the 20th century. As radio quickly developed into both a way of transmitting information and booming business, governments recognized that without regulation it would be easy for signals to become jumbled. They distinguished between commercial operators and amateur ones, who were limited to a slice of the spectrum. The American Radio Relay League, which sponsors Field Day around the country, helped organize “relay stations” that let amateur radio users reach people farther away than they otherwise might be able to reach.

Hughes Club member Betty Barch, who on field day will have one antenna attached to the trailer hitch of her camper and another antenna clipped to the railing of her balcony, remembers realizing the power of the technology when she was a child. A large earthquake struck Mexico, and news reports indicated that there had been significant damage, including widespread power outages.

“I asked my dad, How are we getting all of this information? And my dad said, ‘Oh, the ham radio operators are doing it,’” Barch said.

Manhattan Beach residents Karen and Mike Vahey got started in amateur radio after their daughter, a member of the Placer County Mountain Rescue Team, gave them a book on how to get their license. Their hobby allowed them to talk with others while deep in the wilderness, where cell phone signal can’t reach.

“We could talk across the country on a tiny little radio when we were camping,” Karen said. “But the real purpose is in case of the big one.”

An antenna belonging to the Hughes Amateur Radio Club is set up in Wilderness Park for the 2019 Field Day. Courtesy photo

The Federal Emergency Management Agency’s guidelines for Community Emergency Response Teams, citizen-led organizations set up in the South Bay and throughout the country that help residents prepare for disaster, describe amateur radio as “a very reliable communications method employed during emergency response.” It also describes ham radios as “complex devices with elaborate protocols,” and notes that operators must pass a test and obtain a license from the Federal Communications Commission.

There is a geek streak running through ham radio, and many of the Hughes club’s members were trained as scientists and engineers. (The club is named for Hughes Aircraft, the company founded by eccentric aviation entrepreneur Howard Hughes, himself an amateur radio aficionado.) The club, however, will help anyone interested prepare for the exam needed to get a license. And, alongside their love of gadgets, ham radio enthusiasts have an aversion to pretension, a DIY ethic that relishes independence and communicating with as little as possible.

During a Zoom interview, Johnson took the components of one of his set-ups out of the Crown Royal bag: a battery, a tuner, an amplifier and the radio itself. Each fit inside a tin of Altoids. (The tuner got wintergreen, the amplifier spearmint.) Combined with a tightly wound 40-meter cable that serves as an antenna, Johnson said he can take the tidy package with him anywhere and set up a radio station.

“That’s what Field Day is all about: being able to take a radio you have and some spare parts, and being able to get on the air.”