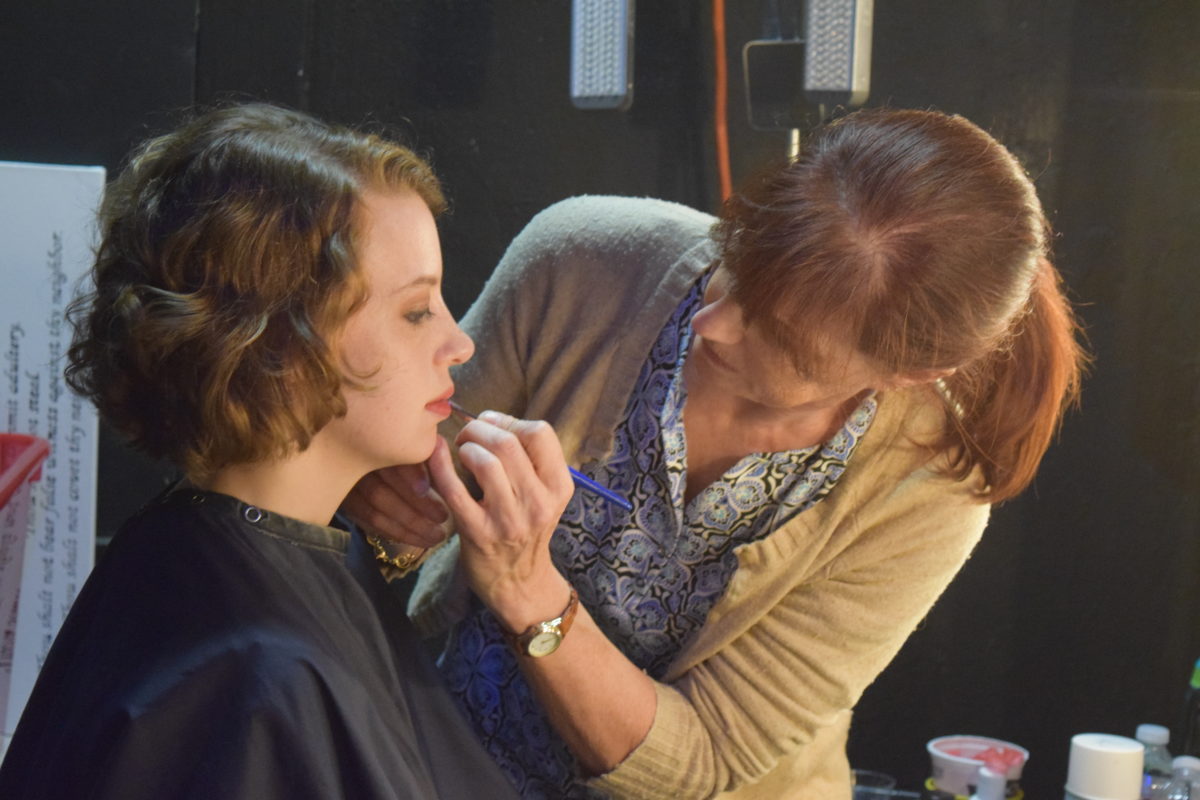 As the scene changes, so does the cast
Hair and makeup artist Patty Jarvis lends her ‘Midas touch’ to local theater productions
by Bondo Wyszpolski
We’ll be checking in on Ruthie and Bill and their three grown children over the course of nearly four decades in Sean Grennan’s “Making God Laugh.” Surf City Theatre’s new production of this play opens Saturday in Hermosa Beach. It’ll be on stage through Dec. 8.
If the five actors in this performance come out each time looking exactly the same, most of us in the audience will be disappointed. Chairs will be overturned, curses shouted, and tomatoes thrown by the dozen.
Fortunately, if we peek behind the curtain, we find the company’s hair and makeup designer Patty Jarvis. She’s the one ensuring that we’ll be able to watch others get older and older, while for us it’s just a leisurely hour or two, and no new wrinkles when we wake up the next morning. 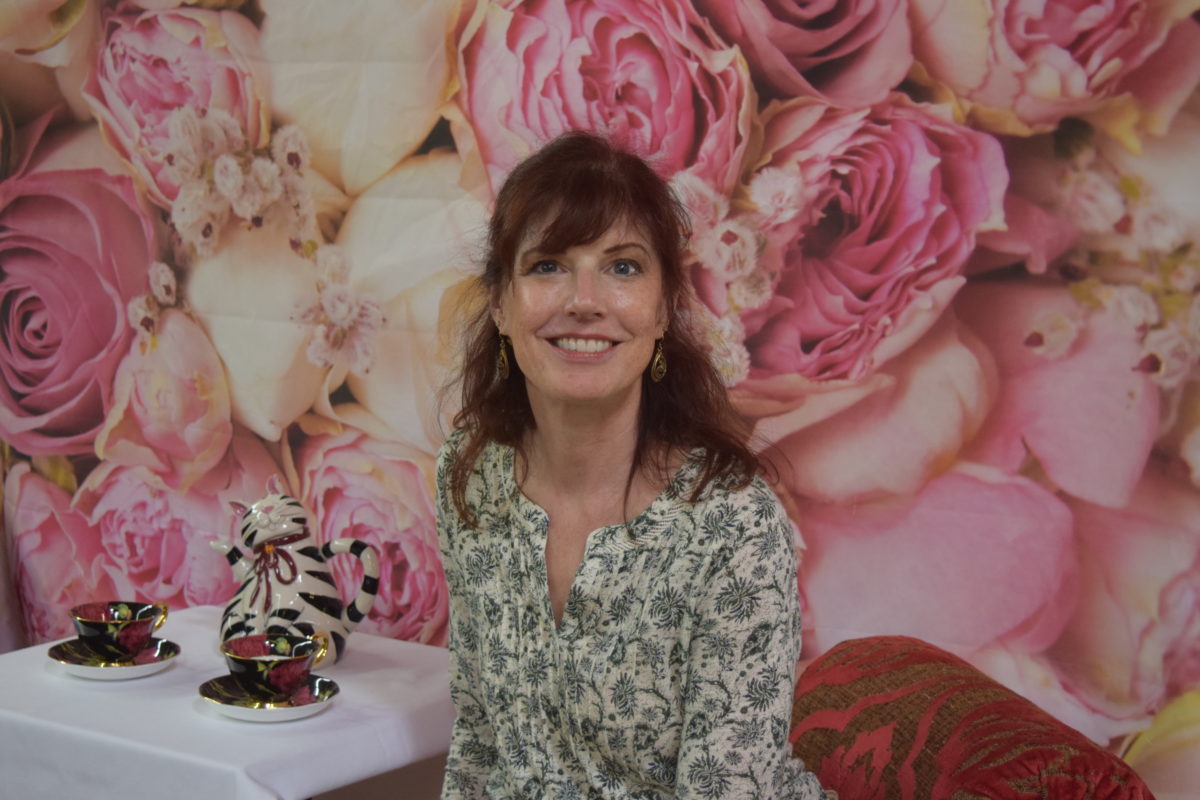 Four decades in 90 minutes?
There are quite a few physical changes in store during “Making God Laugh.”
“Yes,” Jarvis replies. “There are 11 wigs. The makeup is an aging process, and each character has four age changes.” One person ends up with four different wigs, while the others have at least one or two. “And then everybody has a face chart mapped out of how we’re going to age them.
“I’ve got the charts already made up, so now all I have to do is put them on boards so that when the time comes for each scene change we’ll put up the new boards so that (the actors) know what specific lines need to be added.”
Lines on their face to go with the lines coming out of their mouths.
So, wigs and makeup are clearly an integral part of this production?
“I believe it is. Also the costuming,” Jarvis says, “but for me the hair and the makeup sets the tone in that each decade has a different hairstyle.” She mentions the mullet and the shag and other styles some of us might rather forget. “As you age, different things happen to your face, so we have to make sure we catch that and map it out so that it looks like they’re aging appropriately.”
Does her interest extend to costuming as well?
“I like working with the costumers, but that’s not where my passion lies. Mine is on the face and the hair.” 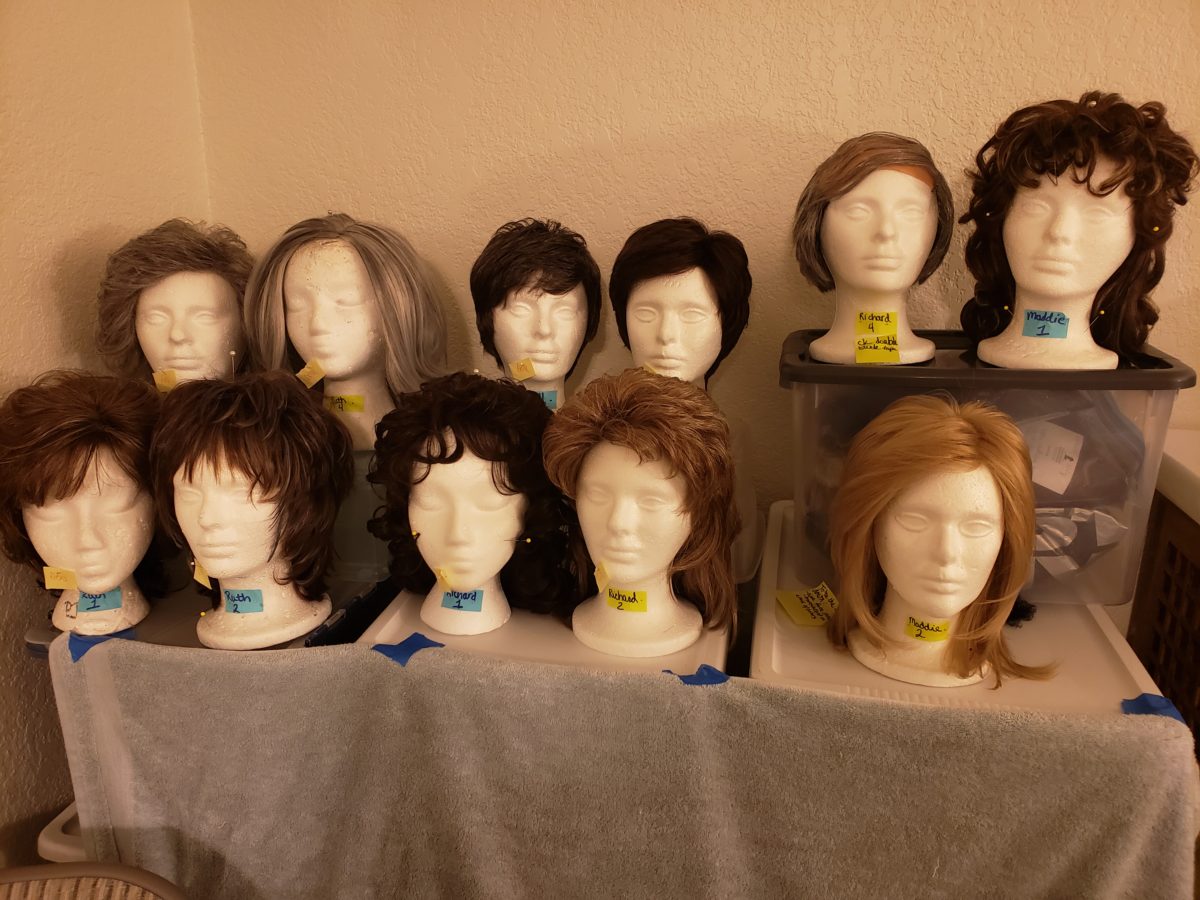 The 11 wigs that the actors wear in “Making God Laugh.” Photo by Patty Jarvis

The best part about her job, Jarvis says, referring to the actors she’s working with, “is that it’s just fun to help build their character. Once you put the makeup and hair together, and they have their costumes on and are looking in the mirror, they become that character; and that to me is the best part of the job, to help them achieve that.”
It’s at this point that actor and character really do start to align.
“Patty is wonderful,” says Bob Manning, president of the Manhattan Beach Community Church Theater. “She’s creative, artistic, and knows how to get the right look for every actor.” 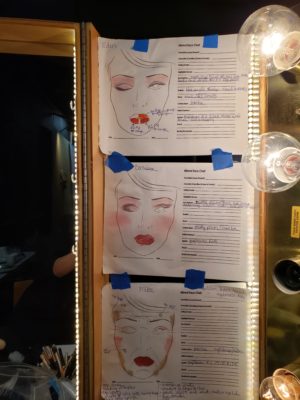 French twisting the night away
Patty Jarvis is currently lending her talents to the Aerospace Players and the Manhattan Beach Community Church Theater, in addition to Surf City. But that isn’t all.
“I do wigs and body painting for Pageant of Our Lord, which is up at Rolling Hills Covenant Church. I do that at Christmastime and Easter, which is their big pageant.
“I also do wigs for Whitney Avalon, with Smart Silliness. She does the Princess Rap Battles on YouTube. So I’ve got some YouTube credits as well.”
When it comes to doing her homework, Jarvis sifts through Pinterest or searches on Google.
“Since I’ve gotten involved in those eras, like the ‘20s, ‘30s and ‘80s, I’ve started my own ‘look book’ in what kind of hair was popular, what was the big style then, what kind of makeup did they wear, and what colors were important.”
Sometimes she’ll improvise or tweak a certain set style. For example, she points out, “I’m one of those people who will do, like, a French twist, but I always like to vary it a little and make it more exciting for me as a stylist, but also for the person who has to wear it and for the people who are looking at it. French twists are beautiful, but you can add a little flair to it.
“And I love braids. If I can work a braid in somehow I’m a happy camper.” 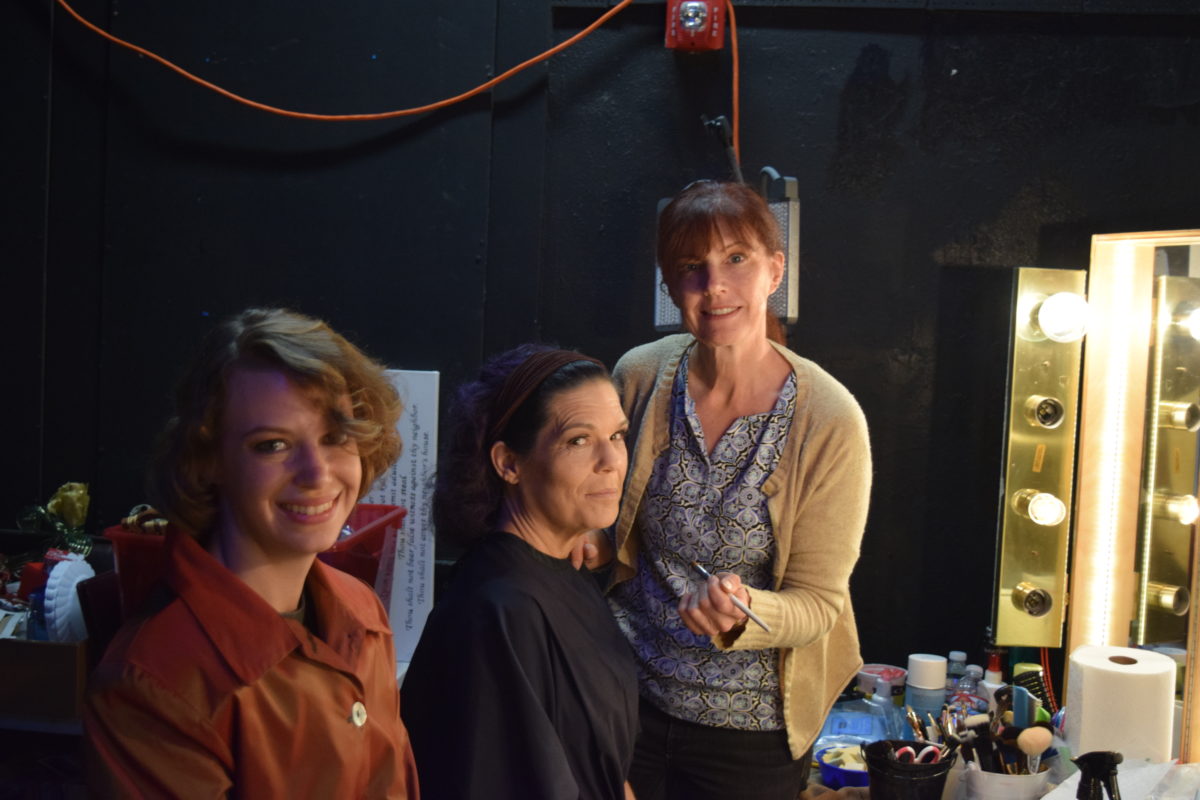 Where the road may lead
But let’s take a step back. How did this passion of hers begin?
Originally from Minnesota, Jarvis moved out to L.A. in the early ‘80s, lived in the South Bay, relocated to the Valley for six years, and returned locally “because I really love this area.”
She connected with the Manhattan Beach Community Church Theater and was on stage in several of their productions. One day she was in the green room getting prepped and one of the makeup artists was a no-show. At which point Jarvis thought to herself, “‘I’ve always wanted to do this; why not volunteer and see how it works out.’ That’s how it all started.” So she began working with Karen Hill and De Anne Johnson, her first mentors.
Hill notes that Jarvis is “always making each performer feel like the star! Once she helped me; now I am her pupil, learning from an incredible and experienced master of hair, makeup and make-believe.”
One day a friend telephoned and said there was a program on television that Jarvis might find interesting. It was an interview with the director of the Downey Makeup Academy. The friend was right, Jarvis did find it of interest, and she called the company. Speeding forward a few weeks, the school offered her a full scholarship. She was able to attend full time.
But that wasn’t the end of it.
“I also got my cosmetology license,” Jarvis says. “It helps to have that extra education behind you, and it’s also California state board certified. It’s more credibility and you get better job offers in case you want to go into movies.”
Which is something that Jarvis wouldn’t mind doing. And speaking of that (because doing hair and makeup for local theater companies, no matter how rewarding on a personal level, won’t bring in the big bucks), Jarvis already has some cinematic experience. To supplement her income she occasionally appears as an extra in films. 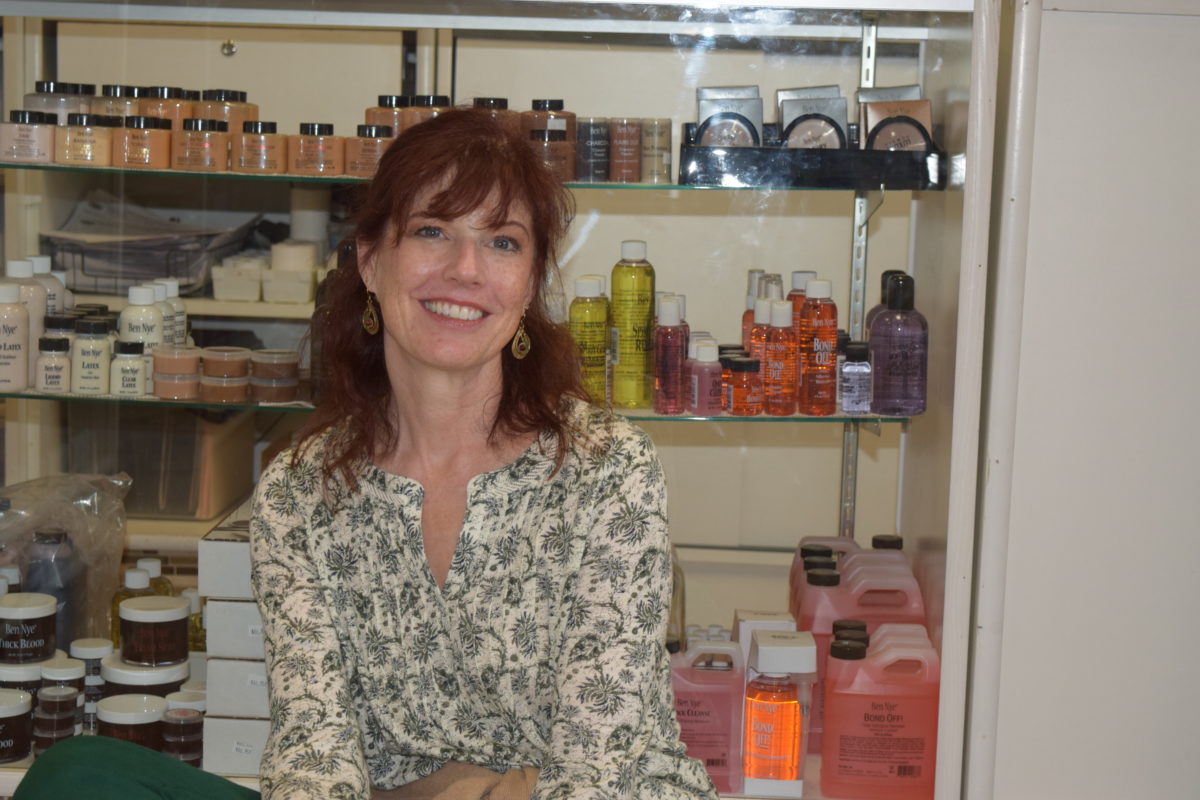 In conversation, though, she’ll repeat that her first love is doing makeup for live theater, and there are a couple of other regional companies she hopes she may be able to sign on with. It would, of course, be to their advantage because, in the words of Manhattan Beach Community Church Theater board member Victoria Alfvin, “Patty Jarvis is an asset to any production. She has the ‘Midas touch’ for beauty. Every actor she touches turns into the character they are portraying.”
The Midas makeup touch. We’ll see this for ourselves beginning Saturday.
Making God Laugh, directed by John-Patrick Driscoll, opens at 8 p.m. in the Second Story Theater, 710 Pier Ave, Hermosa Beach. The show stars Melody Cohen (Ruthie), Christopher Mur (Bill), John Untalan (Richard), Carly Hendricks (Maddie), and Andrew Gerde (Thomas). Additional performances are Sunday at 2 p.m., plus Nov. 29 and 30 at 8 p.m., Nov. 30 and Dec. 1 at 2 p.m., Dec. 6 and 7 at 8 p.m., and Dec. 7 and 8 at 2 p.m. Tickets, $28. Call (424) 241-8040 or go to surfcitytheatre.com. ER