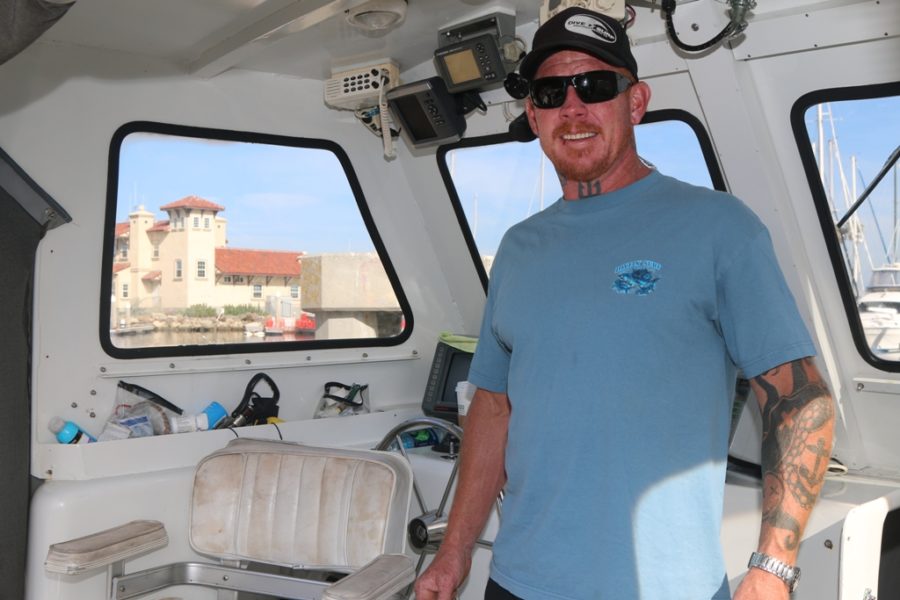 Taras Poznik in the pilot house of the Island Diver, the Dive N’ Surf dive boat he skippered. Photo by Kevin Cody

Once troubled South Bay rebel Taras Poznik, who found redemption at sea, lost his life freediving for giant white sea bass off of Palos Verdes on Thursday. His loaded speargun was found shortly before midnight Friday, floating near the 18-foot Boston Whaler Outrage he had borrowed Thursday morning.

Paul Hugoboom was vacationing this week in Tahoe when Poznik called him Thursday morning to ask permission to borrow Hugoboom’s Whaler.

“We dove together off Palos Verdes last Friday and I shot a 40 pound white sea bass. Taras told me he had seen an even bigger one, but the visibility was poor and he wasn’t able to get a good shot at it. He wanted to borrow my boat to go back for it,” Hugoboom said. 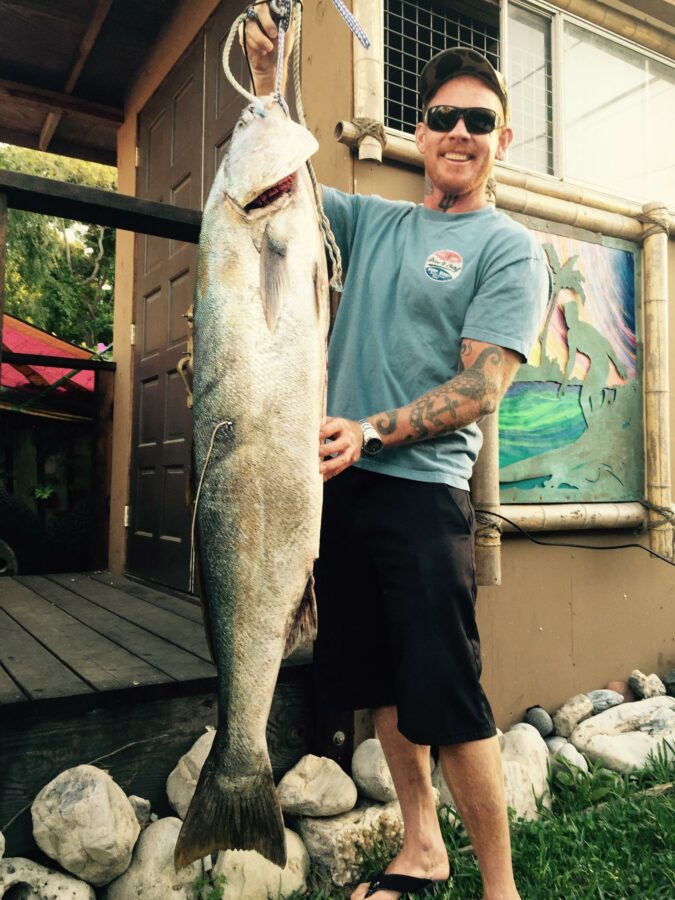 Taras Poznik with a 60 pound white sea bass like the one he was looking for on Thursday. He speared this one last spring. Photo by Chris Rae

“Friday evening, I got calls from two Long Beach Neptune Club dive buddies. They had seen my boat untended, anchored off Palos Verdes. So I called the lifeguards. They sent Redondo Harbor Patrol to check my slip. It was empty.”

Searchers quickly found Hugoboom’s Boston Whaler and Poznik’s speargun floating just outside the kelp bed off the northern end of Palos Verdes, about three-quarters of a mile from shore.

Sheriff and Los Angeles County lifeguard divers began bottom searches at daylight Saturday and found Poznik’s body, after multiple dives. A coroner’s report on the cause of death is not expected to be completed for several days.

Hugoboom said Poznik could have been hit by a boat or a shark.

“Boats speed through there. I’ve almost been hit a number of times,” Hugoboom said. A shark attack is the least likely cause, he said.

The most likely, he speculated, is shallow water blackout, a result of an imbalance between oxygen and carbon dioxide in a diver’s blood stream. 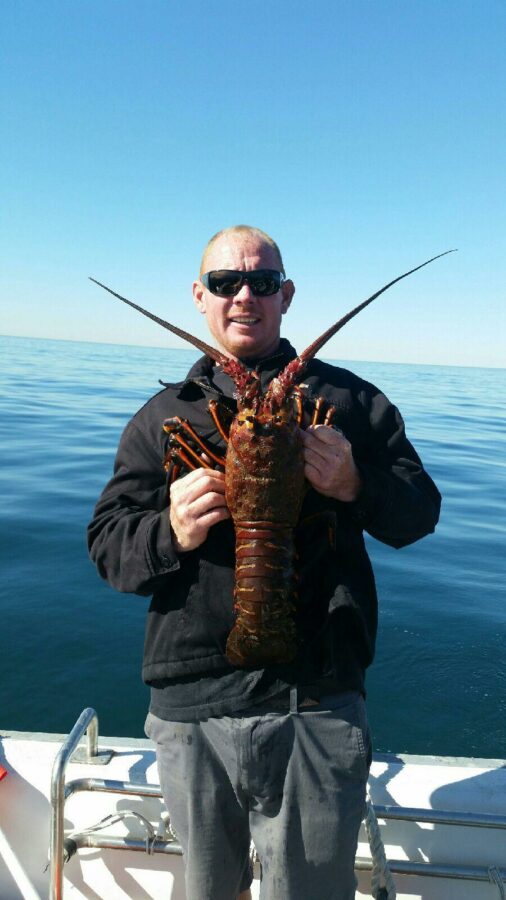 “I know Taras was anxious to get a good shot on the white sea bass he saw.”

Gina Walton became concerned for her boyfriend when he failed to show Thursday at John Lessing’s shaping bay on Cypress Avenue in Hermosa Beach. Walton was shaping a surfboard for Poznik’s 14-year old daughter Desiree.

“Taras would do anything for Desiree and his son Alexander,” Walton said. “It wasn’t like him to miss Desiree’s shaping appointment.”

Poznik had told Walton he was going hunting that morning for the giant white sea bass he’d seen Friday with Hugoboom and again Monday and Tuesday while diving alone.

The two had met at Lessing’s shaping bay. Lessing had been making Poznik’s boards for decades.

“Taras loved big waves and his big wave guns,” Walton said. “They were always the same colors. Red with a black stripe down the middle.”

Poznik’s break was Topaz Jetty in Redondo, which on big days compares to Backdoor Pipeline for its steepness and shallow bottom, according Mike Purpus, a former U.S. surfing champion who lives at Topaz Street. 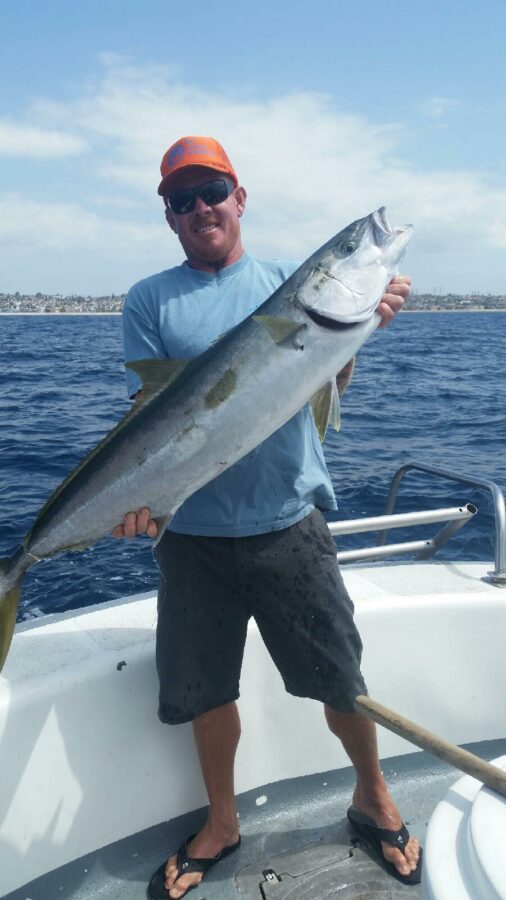 Purpus described the 6-foot-2, 220 pound Poznik as an intimidating figure in the lineup, even when the anger he spent a lifetime trying to control was in check. Poznik’s beamy left forearm was tattooed in broad, black Pacific Islander style, with a smiley face with X’s for eyes and an anchor wrapped in an octopus. Neptune’s Triton was tattooed on his thick neck.

After still not hearing from her boyfriend Friday night, Walton texted her friend Liz Benavidez, a former pro surfer and close friend of Hugoboom’s. Walton had been watching their dogs while Hugoboom was in Tahoe.

While waiting for Benavidez to respond, Walton went to U Dock in King Harbor to look for Hugoboom’s Boston Whaler. Her concern heightened when she saw his empty slip.

“We met up and drove to the Cove in Palos Verdes and saw the boats searching.”

The two climbed down the steep Cove trail to the water’s edge and walked south along the base of the cliff, rock-dancing with the incoming, 5-foot high tide. At dawn, they reached the wreck of the Dominator, at the south end of the dive zone where Poznik would have hunted the white sea bass.

“He worked with me on keeping my head screwed on and I taught him to control his anger, his demons,” Rae said.

“He taught me to freedive. I taught him to tie fishing flies. Wednesday, he was at my house for four hours, working with those big hands. He tied a beautiful fly. He said, ‘Here Rooster, I want you to have it. Then he gave me a big hug and said, ‘See you at the meeting tomorrow night at 7.’

“Thursday night, he didn’t show. I texted him Friday to let him know I made it. Saturday morning at 6:30, I found a note on my door from Gina. It said, ‘Taras missing. Speargun and boat found.’”

Rae and his wife Judy went down to the Island Diver, next to the King Harbor fuel dock. Poznik skippered the 36-foot Dive N’ Surf dive boat. They saw Walton’s car and learned about the search.

The couple drove up to the Cove.

“We saw the search boats and helicopters and walked down the trail and followed the cliff out to Indicators,” Rae said. Indicators is at the north end of the zone where the white sea bass come in each spring. 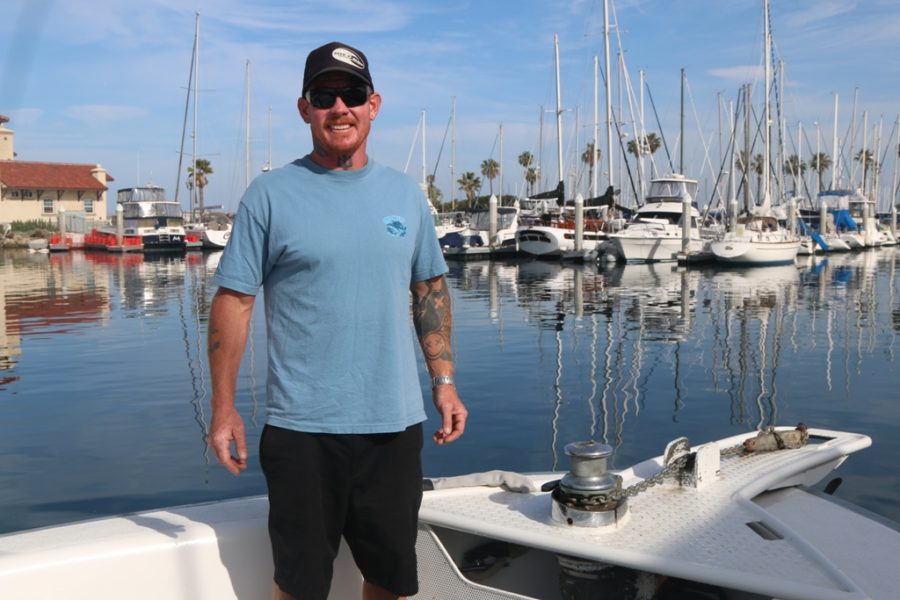 Taras Poznik on the bow of Island Diver. Photo by Kevin Cody

“Taras came up behind me, gave me a bear hug and broke my ribs. I still can’t bend over,” Meistrell said.

Poznik came with Island Diver when Meistrell bought the converted Navy Vietnam river boat  two years ago. Meistrell had seen Poznik around the harbor for years, but knew him only by reputation, not all of it good.

Poznik was haunted by a 2000 conviction for spearing “Big Mama,” a 50-year-old halibut that had been on display in a tank at the Redondo Beach SEALab. Attorney Laurie Belger, who represented Poznik, told the Washington Post, “I’ve tried over 20 murder cases in my career, and nobody cared. But you steal this fish, and eat it? I tell you, it was as if he had barbecued Bambi. People want to put him in the gas chamber.” 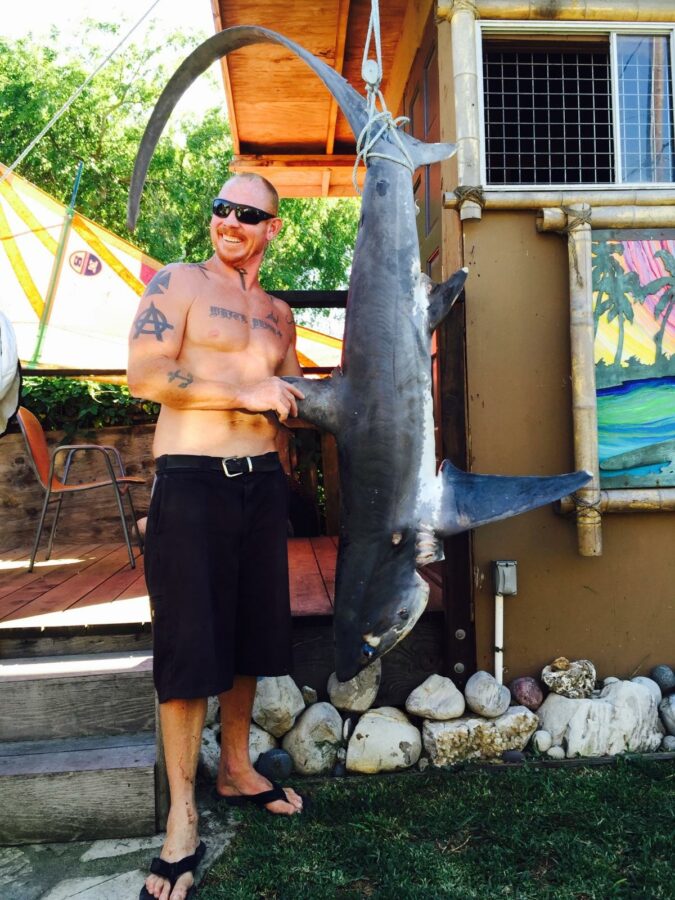 Meistrell’s nephew Matt Meistrell describe Poznik as, “A little scary on the outside, but a heart of gold inside.”

“He didn’t talk about it. He was about it. He dove, surfed and fished. He was the best charter dive captain on the West Coast. Ask anyone who dove with him. He made a lasting impression on all of them,” said Matt, himself boat operator of the 40-foot fishing boat Que Paso.

“He was full of truth, honor, love, kindness, courage and steadfastness. He’ll be my true warrior brother forever.”

Hugoboom, on learning his dive partner’s body had been recovered, said, “He had a troubled youth and came out shining pretty bright. People close to him admired him for that.” ER 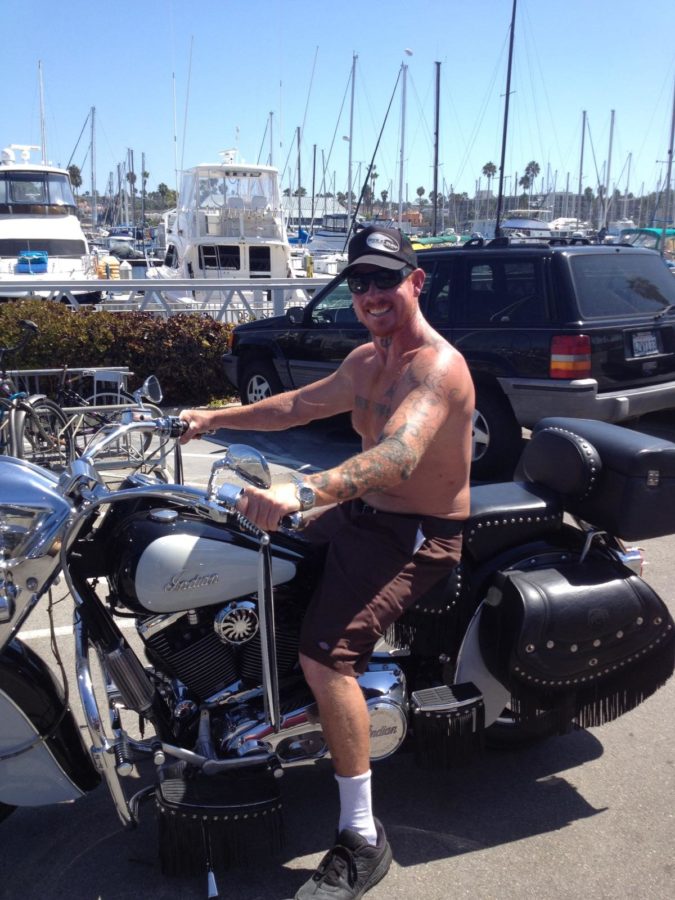