Spotlight on the hill – Wine for the millennials 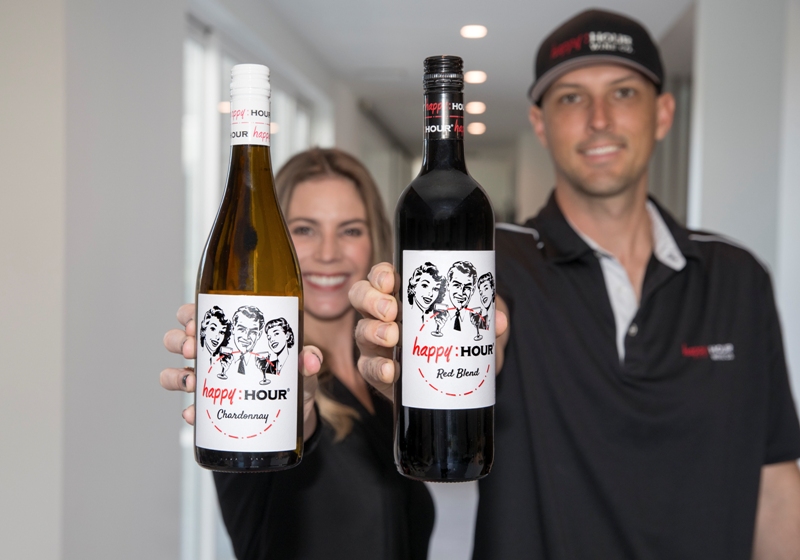 The Jolleys designed their wine label to evoke the 1950s. Photo by Brad Jacobson

Some families have been in the wine business for so long they’re said to have wine in their veins. Winemaker Kristin Jolley does indeed have a generations-old family wine  connection, but her family history is less glamorous than most.

“My great-grandfather was a winemaker in the town of Orléans, near Paris. I remember my grandma saying, ‘I would never touch that wine, it was so gross. Your great grandfather would make it in his underwear with his dirty feet, and all of his friends would get in there to stamp the grapes.’ Nobody took over the family business, and his wine press is a floral centerpiece in the town square. So I grew up with the stories, but it was much later on that I got into wine.”

Kristin and her husband Stephen own Happy Hour Wine Company. The brand is focused on selling easy drinking wines, which after only two years are available in 23 states.

Kristin, a Redondo Beach native, studied supply chain management in college and was working for the Fresh & Easy grocery chain when she had an epiphany.

“I thought, there’s a happy hour at every bar and restaurant, but there’s not a brand called happy hour. If there was, you could have happy hour any time, anywhere. I came home one day and told my Stephen I wanted to start a wine brand called Happy Hour.”

The trademark had already been registered, but Kristin couldn’t find any evidence that the owner was doing anything with it.

“The phone number was right there on the trademark website, so I called him and said, ‘I’m Kristin, and I want to buy your trademark.’ He said he wasn’t interested in selling it and hung up on me.  I called him every month for a year and a half, and every time our conversations got a little bit longer. He had a little beer company in Florida that did business there and in New York. Finally he asked, how old are you? I told him I was in my early 20s, and he said, ‘I’m 92.’ So I said, you have to sell me this trademark and you have to do it now. He said, ‘You have been so persistent and tenacious, I’ll sell it to you.’ He didn’t have an email address, so we did everything by snail mail. I would write a document, and he’d want to change one word and he’d mail it back to me, so what could have taken a couple of days took six months.”

The precious trademark having been acquired, Kristin and Stephen now had to figure out what to do with it. Kristin had taken wine classes and had a good idea of what she wanted. A friend knew a fourth generation winemaker in the Spanish province of La Mancha. A trip was taken, an agreement was reached, and they started collaborating to create a red and a white wine. 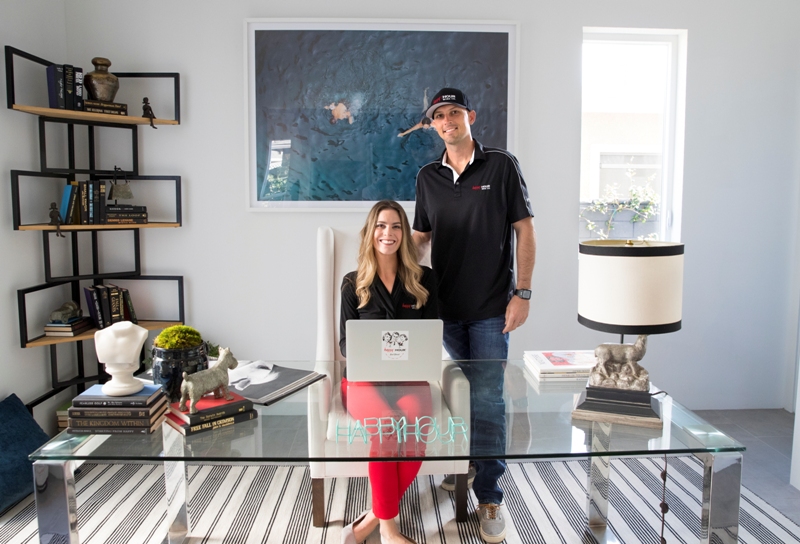 “We knew what we wanted the white to taste like, and we worked with them to make this Chardonnay that was light, crisp, and refreshing. We didn’t want it heavily oaked because we wanted that citrus-forward aspect, so it spends a little time in French oak so you get this kiss of vanilla. Our red blend we wanted to be smooth and easy drinking, so we came up with a Cab, Syrah, and Petite Verdot blend. Though both are made in Spain, we’re using varietals that are popular in the American market, so we don’t market them as Spanish wines.”

The wine business was a sideline for Kristin until the sudden closure of Fresh and Easy presented her with a stark choice: find another grocery marketing job or make the wine business a full time job. She chose the wine business. Stephen kept his decade-long career as a firefighter and worked with his wife on his days off. Together they designed the label, which has a retro look, reminiscent of 1950s’ advertising, which appeals to their target demographic.

“Our market is millennials, the ones who are going to happy hours. We want to have this brand retail for under $10, to keep it accessible. You don’t have to have a sophisticated palate to enjoy Happy Hour, it’s not a wine snob wine and we don’t want it to be. It should be fun, accessible, and easy to drink. We’re turning America’s favorite pastime into a brand. We do events, wine festivals, and in-house samplings at Whole Foods, and we’re the house wine at Good Stuff restaurants.”

Kristin and Stephen have been piling up the frequent flyer miles going back and forth to Spain.

“We work with our winemakers and blend the wines with them to make sure they are what want them to be. We started on the business side but have become involved with the artisan side, or perhaps it’s better to say the aesthetic side. We have been out in the fields, picked the grapes, and learned everything we can. We love being involved in the process from beginning to end.”

Kristin was emphatic in saying they don’t want or need to have a product in every category.

“We’re working on a rosé to be available in spring of next year, and that will complete our line, for now. We’re trying to keep this simple. We’re a small business that is taking off, and we’re working toward becoming a household name.  Look at what we have accomplished already. It has been two years, and we’re now in 23 states, working with major retailers like Von’s and Whole Foods. Both wines are getting respect from sommeliers. One at a major restaurant in Las Vegas tried our white and told me, ‘If I didn’t know what this was I’d guess it was a white Burgundy in the $25 per bottle range.’ We’re happy with that, getting respect from professionals for a wine that was designed to be approachable and not intimidating.”

Perhaps there is some genetic disposition to not only loving wine, but to also love making it. Certainly Kristin has taken the business far beyond her grandfather’s dreams. She mentioned she might someday be interested in starting a winery in California, but finished that statement with a dismissive, “That’s a dream down the road.”