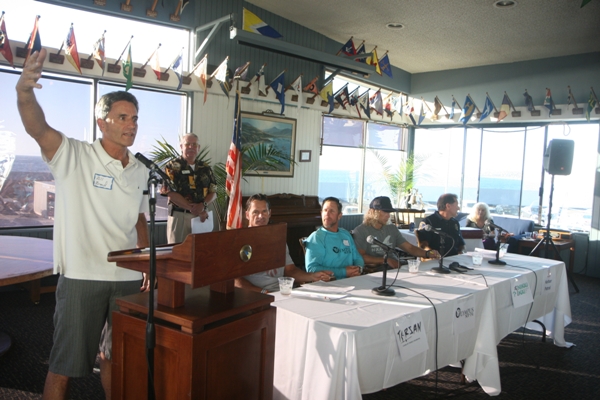 The meeting at the yacht club drew nearly 100 boaters and paddlers. It was convened by King Harbor Yacht Club member  Mark Hansen, a former commodore of the club and a member of the city’s boater advisory committee. Hansen expressed the club’s support for stand-up paddlers, but stressed the need for paddlers to avoid conflicts with boaters.

“Stand-up paddling is not a fad,” he said. He compared the sport’s growth to that experienced by snowboarding. “When people tell me they think it’s a fad, I ask them ‘Do you ski, or snowboard?’”

Jeremy Godokiss, owner of Olympus Board Shop in Torrance, noted that like snowboarding, stand-up paddling was initially viewed as a fringe sport, but now represents a significant segment of the water sport community.

One benefit of the sport’s growth, he said, is that the more people enjoy the ocean, rivers and lakes the more conservation conscious they become.

Jason Shanks, owner of Nikau Kai Stand-ups inManhattan Beach, attributed part of the sport’s growth to its growing popularity among surfers. He said he started stand-up paddling after a friend told him it would improve his surfing. 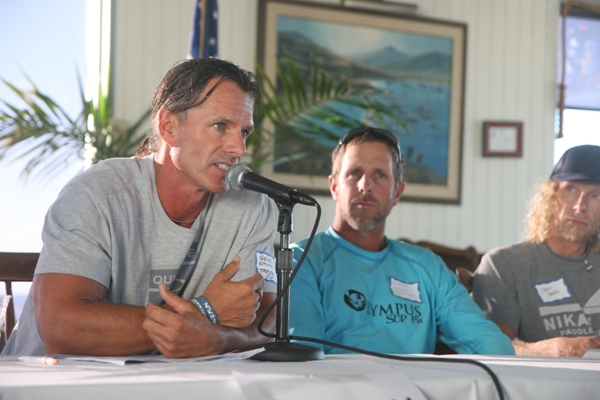 “I’ve been a boater for 40 years and a harbor patrolman for 25 years and I’ve never seen a sport grow exponentially like stand-up paddling,” he said. “I’m on my fourth paddleboard,” he added.

Dornberg stressed the importance of being pro active in planning for increasing numbers of paddlers in the harbor.

“We don’t want to wait for that first fatality,” he said.

To illustrate the potential dangers, he said he was recently paddling in the open ocean when a boater began yelling at him.

“I had paddled past his stern thinking I was safe. But if he hadn’t yelled I wouldn’t have seen the fishing lines he was trailing, attached to treble hooks.”

Dornberg said that state and federal law recognizes stand-up paddleboards as vessels, giving them both the rights and responsibilities of sailboats and power boats. 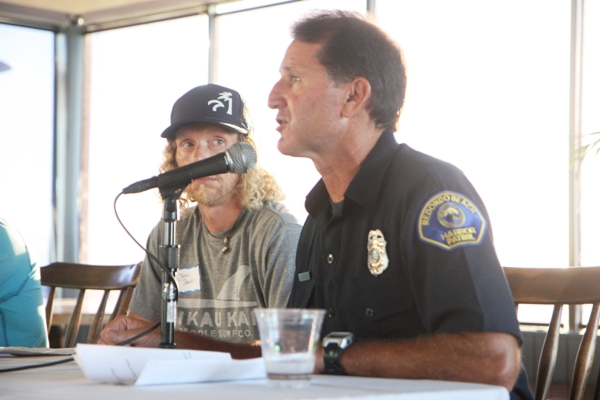 Though stand-up paddleboards, along with outriggers and kayaks, have priority right-of-way, followed by sailboats and then power boats, he said paddlers should respect the “rule of tonnage.”

Stand-ups are not prohibited in the main channel he said, but he suggested they stay outside of the buoys that mark the boating lanes.

All paddlers are required to have a PFD and a whistle and paddling prone, or laying down, is prohibited, he said.

“We don’t want to mix swimmers and boats, and we error on the side of safety.”

Dornberg said stand-up paddlers are not required to wear PFDs when surfing because they are within 300 yards of the beach, where vessels are prohibited.

He added that the Harbor Patrol, in recognition of the sport’s infancy, has yet to issue any citations to stand-up paddlers, but has chosen to focus on advising them of the need to paddle safely.

Harbor Commissioner Michael Jackson noted that the harbor is undergoing a series of improvements, including last week’s city approval of the 54-room Shade Hotel and the recent expansion of the hand boat launch behind the Seaside Lagoon. The launch was expanded to accommodate dinghy’s from boats staying overnight on the 26 moorings that are planned for the main channel.

The boat launch is the only public place where stand-up paddlers are allowed to enter the harbor. The launch is also used by kayakers and personal water craft (Jet skis).

Harbor Patrol Sergeant John Pickens said paddlers should be prepared for delays at the launch as the sport becomes more popular. If conflicts arise, he said, call the Harbor Patrol for help.

Councilman Bill Brand, who represents the harbor district, said guidelines for paddling in the harbor will be addressed during the city’s upcoming strategic planning sessions. ER