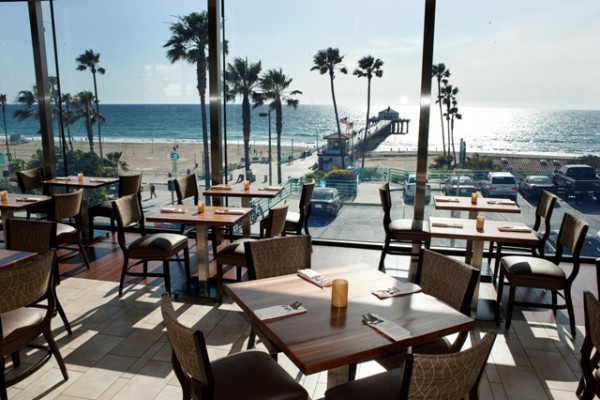 I usually turn off my phone in restaurants, and have been known to glare at people at adjacent tables who are loud about their conversations. Still, when I had dinner at the Strand House, I used my cell phone multiple times – not to call anyone, but to go on the internet to look up arcane spice combinations and sauces. I am a dedicated student of cooking, but some things here had me scratching my head in puzzlement.

The menu is not deliberately confusing – it’s the natural product of a creative team that has an extraordinary arsenal of techniques and ingredients at their disposal. The owners spared no expense remodeling the former Beaches Restaurant, including a lavishly equipped kitchen. They then hired celebrity chef Neal Fraser to create a menu unlike any other in the South Bay, with recipes spanning the globe, exotic ingredients, and meats smoked or cured in-house. The ambition was obviously to create a restaurant that would stand comparisons with not just the best in the South Bay, but in a far wider region.

The fact that an establishment can offer a sophisticated experience doesn’t mean that the public will warm to it, or that it will always be executed perfectly – though the Strand House opened strong, there was a rocky patch last year. A review from the Los Angeles Times was just short of savage, and I heard from readers who feared the place would turn into a mirror of the previous establishment in this location, a nightspot that happened to serve meals. When I visited the Strand House in December there were curious lapses – duck pastrami that was so heavily cured that the duck flavor was obliterated, vegetables that had been over-salted. The overall experience was not bad, but it fell well short of mind-blowing. There were rumors of friction in the kitchen, and I was not too surprised when I heard that changes were in the works. Original Executive Chef Travis Lorton left and was replaced by Greg Hozinsky, who had an enviable record at Shade’s Zinc Lounge. I gave him a few months to settle in and work on consistency before returning to see how things were going.

We arrived for dinner without a reservation, which was taking a chance – even early on a Thursday there were few tables left. Our table was away from the windows but we didn’t mind; after dark the view of the bay is less impressive, but the elegant modern interior can be appreciated just as well. We ordered drinks and got down to the business of investigating the menu. This was when I pulled out my phone to look up a few things, specifically lonza, vaudavan, and charmoulah. (to save you from having to do so, they are respectively air-cured pork loin, a French version of curry, and a North African marinade.) Our server Harmony was knowledgeable and had already been helpful with a question about a drink ingredient called Combier liqueur, but we didn’t want to pester her with questions, and we had plenty. This is not to say that there were no straightforward items on the menu; you can get a steak or simple pasta here, but we gravitated to the most eclectic items. After being tempted by a king crab leg with bruleed uni and lemon sauce, we decided to start with sunchoke and celery root soup, a Dungeness crab salad with vaudavan sauce and basil, and lobster pasta with peas and mascarpone cheese. 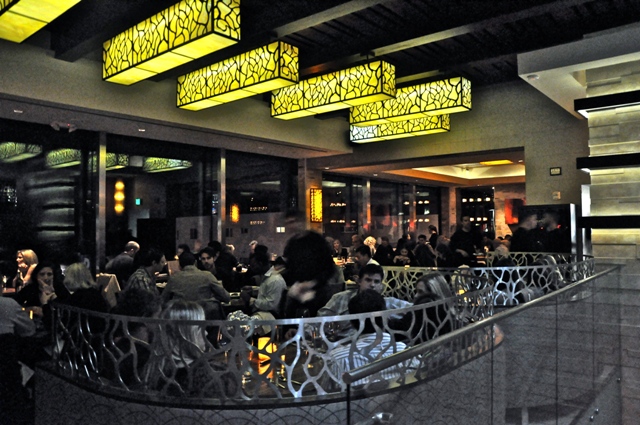 Dinnertime at the Strand House. Photo by Kathalina Rodriguez

First there were cocktails to be sipped, and these set a high a standard for flavor and creativity. I ordered a “Thirteen Stars,” composed of cognac, port, grand marnier and fresh nutmeg, while my wife selected Corteza, an upscale margarita using house-made orange bitters. The Corteza was an exceptionally good margarita with tart, refreshing flavors and scents of citrus and mint, the Thirteen Stars like nothing I’ve had before: cool, complex, and fragrant. I usually prefer wine with dinner, but creations like this can tempt me away from even the excellent selection here.

We had asked for the starters to arrive in whatever order they were ready, and the soup and crab salad arrived first. Sunchokes have an artichoke-like flavor, while cooked celery root purees into something akin to potato soup with a fresh celery scent. Both pair well with seafood, in this case lightly grilled scallops that had been added to the soup just before serving. The natural flavors were subtly modified, a rustic dish refined. The Dungeness crab salad was more sophisticated, both in flavor and presentation. The mound of crab with Asian pear was ringed in by chips of fried lotus root and topped with very aromatic Thai basil. Whether vaudavan dressing originated in a French colony in India or was a later development depends on which culinary historian you believe, but the mild, aromatic curry is a synthesis of both cultures – recognizably Mediterranean but with prominent flavors of cardamom, ginger, garlic, mustard, and fenugreek. The portion was slightly small but the flavor was big, and we were glad we ordered it.