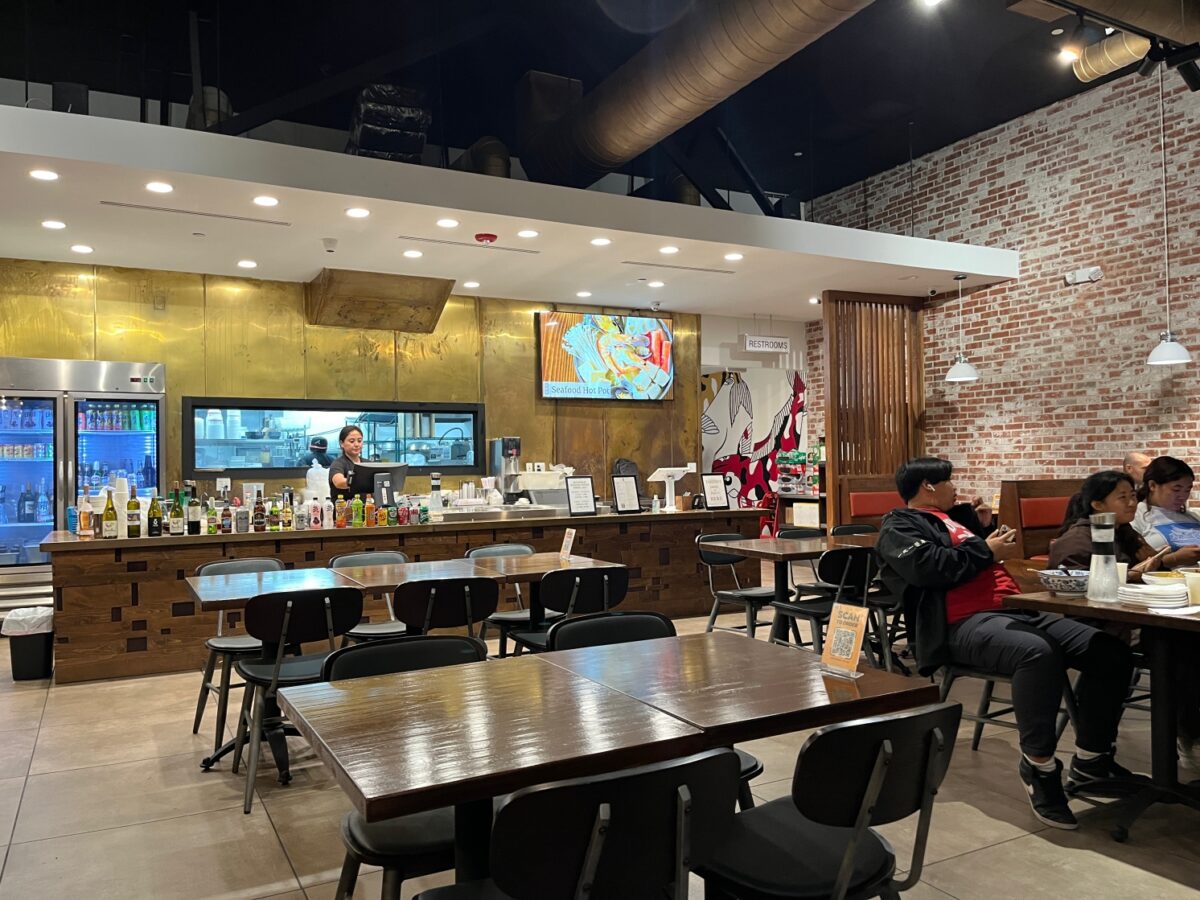 The interior at Northern Cafe is bright and modern but has some style. Photo by Richard Foss

If you go to the Northern Cafe in El Segundo because you like others in the chain, you might be surprised

When chain restaurants began to flourish in the 1930s, they targeted people who were driving through strange towns and didn’t know a place that served anything they liked. If visitors saw a sign they recognized, a White Castle, A&W, Steak and Shake, or one of the other popular franchises of the day, they could pull into the parking lot already knowing what to order. As these franchises have gone global, there are variations to take local tastes into account– I’ve had a “Greek Mac” gyro at the McDonalds in the Athens airport, and a Big Mac with cabbage instead of lettuce in Australia. Each was slightly weird, but recognizable as a variation on what was served back home. The promise of the unchanging experience was bent a bit, but not broken.

What, then, can be made of experiencing several restaurants that have the same name but serve very different menus? The place that prompted this question was the Northern Cafe, a Chinese restaurant that you might expect to serve Northern Chinese food. I first visited a location in Westwood and found some northern dishes like scallion pancakes, black bean noodles, and cumin lamb, but also Sichuan dishes like dan dan noodles and Shanghai soup dumplings. When I asked about this a manager shrugged, and said that started out serving only Northern food, but expanded the menu without changing the name. The spicy items were vigorously hot and complex, and I resolved to return the next time I was in the area.

When I saw another of their signs in Gardena I stopped in and found a slightly different set of offerings that included grilled whole squid and Taiwanese specialties. I was further confused when I stopped in at a location in Palos Verdes that had a smaller menu and much milder flavors. I wasn’t sure what to expect when I went to the newest location in El Segundo.

Sure enough, it was different and featured complex hot pot stews alongside the noodles, stuffed dumplings, and stir fries that are offered at all locations. On my first visit in late August, I was in the mood for a quick light lunch and ordered a bowl of pork wontons in spicy sauce. They were everything I hoped for, the noodle wrapper springy in texture and stuffed with seasoned pork, the sauce assertively spicy and loaded with green onions, chopped peanuts, and crispy toasted garlic. I had found my new go-to Chinese restaurant in the South Bay. 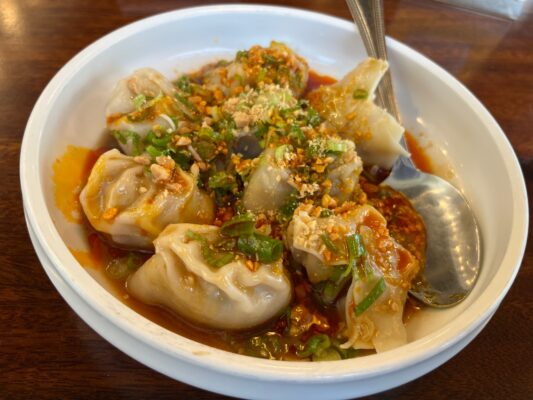 The Northern Cafe’s dumplings in spicy sauce were exceptional, and made our reviewer decide to return for more. Photo by Richard Foss

I have been back about once a week since then, because it’s a big menu and I want to sample everything. I don’t have room in this review to write about everything we tried, so will mention the highlights, disappointments, and some things to watch for.

First of all, the default ordering is via an app, but since the menu is very long this involves almost endless scrolling up and down your phone screen. They do have paper menus and will provide them on request, and the servers have all been quite helpful when it came to answering questions about their offerings. These include portion sizes, which are substantial, so it’s worth asking whether you have over-ordered. You’ll also need to talk to a server if you’d like to order wine or beer, since both are available but not on either the online or paper menu.

I recommend starting with either a plate of dumplings or one of the pancakes, which are actually more like an Indian paratha than the items Americans customarily douse with butter and syrup. They’re flaky and crisp, and are available with green onions in the dough or rolled into a pinwheel with beef or pork. The meaty versions are quite filling, so if you’re ordering this as a starter for two, you may take half of it home. Fortunately, they reheat well the next day.

If you choose dumplings, there are a dozen different varieties steamed, pan-fried, or boiled, and tossed with sauce as I had them on my first visit. They’re handmade and may take a few minutes, but are worth the wait. I happen to prefer the pork and celery filling, but haven’t had one here yet that I didn’t like. 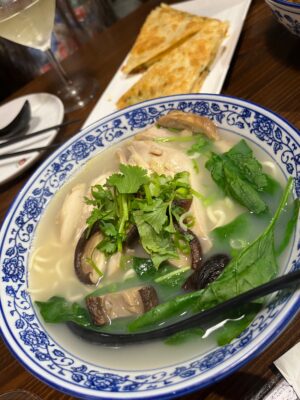 A bowl of chicken noodle soup at the Northern Cafe. Photo by Richard Foss

Most soups have been good too, particularly the spicy, slightly smoky beef noodle soup, and a chicken noodle soup with bok choy, but I was not a fan of their hot and sour soup. The broth was good, spicy with a vinegary tartness, but the only things in it were egg, tofu, green onion, and slivers of mushroom. There must be somewhere in China where they prefer it like this, but I like the texture and flavor from bamboo shoots, pork, chicken, and other ingredients.

The eggplant with garlic sauce and stir-fried string beans have been well-made, the fried noodle and dan dan noodles even better, and if you enjoy somewhat conventional Chinese meals, you can assemble a fine one from these dishes. If you feel like trying something different, head for the hot pots, and if you’re feeling brave order the house special pot. This contains your choice of beef or chicken with meatballs, corn, fish balls, crab, sausage, spam, mushrooms, imitation crab, konjac jelly, and tempura. (Spam in Chinese food, you ask? Yes, the American military introduced it to Taiwan, and it has become popular. The flavor is slightly similar to a very expensive type of Chinese ham, and thrifty Chinese adopted it. As for the konjac jelly, it’s a soup base made from sweet potatoes that is gluten-free and has a mildly sweet flavor.) 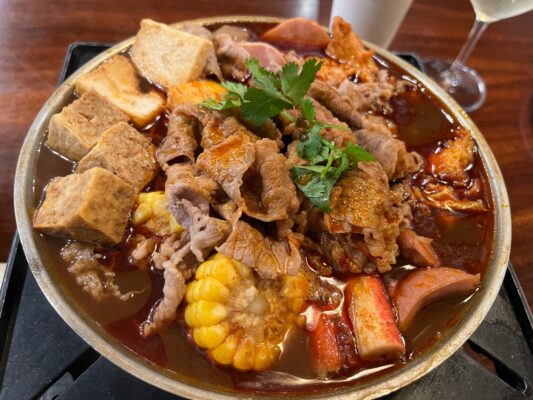 The House Special Hot Pot is a complex mix of ingredients in a very spicy multilayered broth. Photo by Richard Foss

That mélange of ingredients is in a broth that is thick, strongly herbal, and very, very spicy. Our server warned me of this when I ordered it, and if you don’t enjoy very peppery flavors you should give it a pass. If you do like hot food, this will have you in ecstasy. If you’d prefer something milder but still zippy, try the seafood hot pot, which has plenty of fish and shellfish with vegetables. Those who prefer non-peppery food might consider the vegetarian hot pot or Chinese sauerkraut stew and report back to me — I haven’t tried either but plan to.

I enjoy wine with Chinese food, and they usually have a New Zealand Sauvignon Blanc that suits these flavors nicely. The only way to check out the whole wine and beer selection is to walk over to the counter to see the bottles on display – the selection varies day by day. The management might consider adding some dry Rieslings and Vermentinos that would complement the cuisine well, and to creating a wine list so the servers don’t have to recite it from memory, but these are minor quibbles.

The Northern Cafe is at the back of Plaza El Segundo near Dick’s Sporting Goods, a low-profile location that has been the home of several unsuccessful restaurant ventures. The Northern Cafe has been the most conspicuously successful business here, and I hope they survive, because this is the best traditional Chinese food I’ve found in a wide radius. They’re a little different from the other locations and a lot different from the rest of the South Bay pack, and deserve their success.