The Friday night "seafood forward" buffet offers so many choices that diners may want to pace themselves. 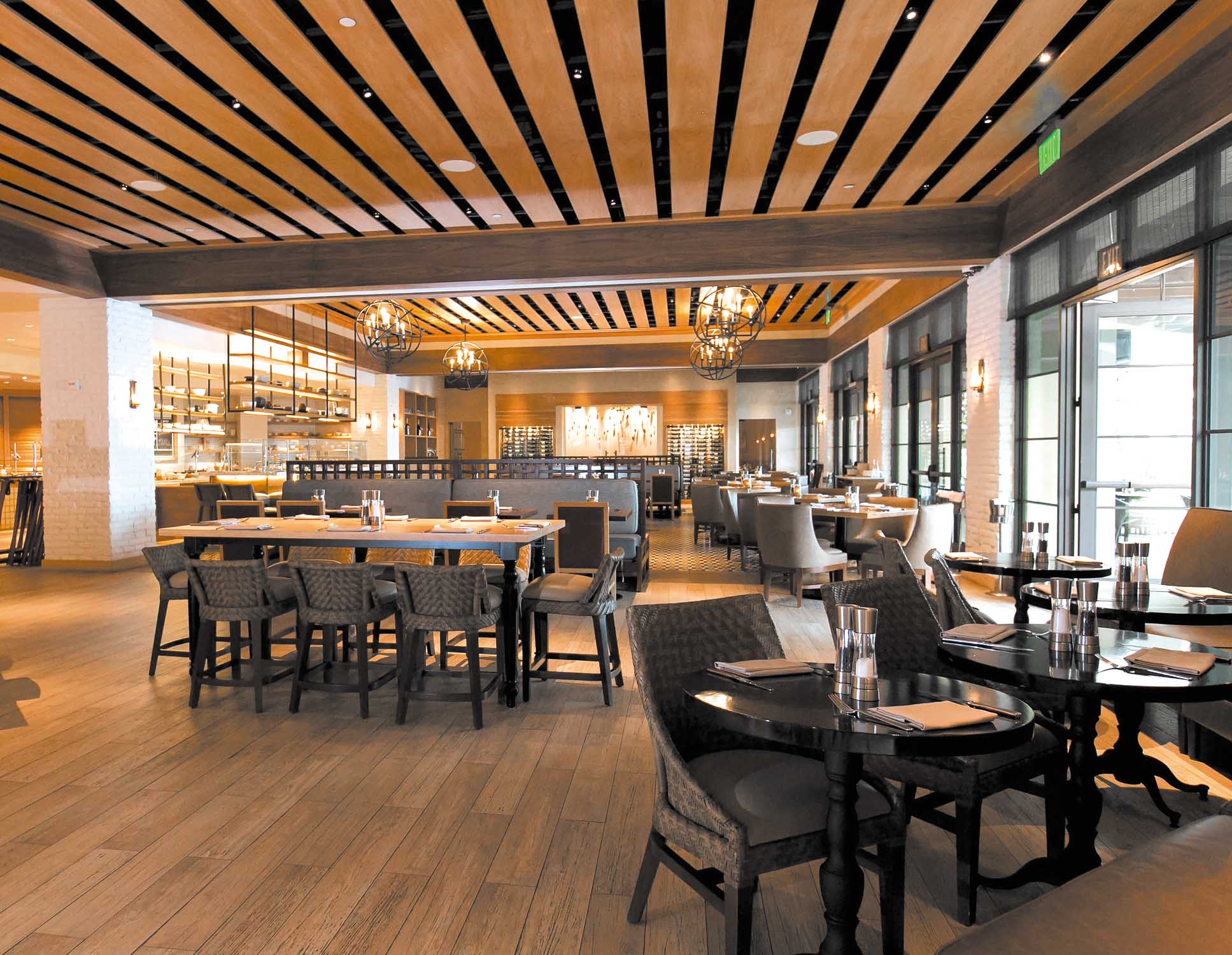 When I heard that Catalina Kitchen had started a “seafood forward” buffet on Friday nights, my first thought was that it might not be a coincidence that it debuted the very same week the Admiral Risty closed. The Peninsula had lost one seafood destination, so it might be a fine time to create another one. Our appetite for all things finned and shellfish seems to be bottomless, so giving people an opportunity to sample a few dozen different items might be a smart move.

I say this as someone who is usually unenthusiastic about buffets, which offer instant gratification but tend to be uneven when it comes to quality. Sometimes it’s because of inappropriate choices like tempura, which needs to be eaten immediately after cooking, sometimes because things are deliberately under-seasoned to appeal to cautious palates. When well-executed, though, a well-arranged display of food does wonders for your appetite and encourages you to try things on a whim. 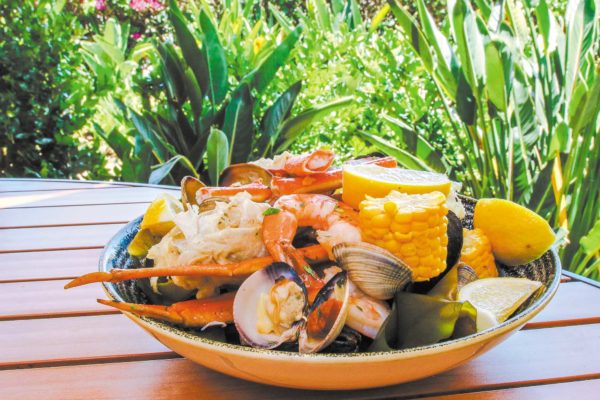 Catalina Kitchen’s seafood offerings are as seductive visually as they are gastronomically. The Seafood Boil. Photos courtesy of Terranea Resort

The setup here is expansive, with a salad bar, pasta and carving stations, and several separate displays of hot dishes near a prominent raw bar with a small sushi station on one end. Skeptic though I am about buffets, I have to admit that as you stroll around to scope out where your calories will be coming from, you will see things you want. As a fan of fresh oysters I had to start at the raw bar. I filled out the plate with sushi rolls, salads, oysters Rockefeller, Peruvian scallop dynamite, and some crab legs, mussels, and shrimp from the seafood boil.

As my wife and I started in on our selections we discovered an amenity we hadn’t known about, a server making the rounds with a cart and offering aguachile. This Sinaloa-style ceviche involves fish marinated in lime juice and serrano chilies with olive oil. As you ordered it you were offered cucumber, purple onion, and micro-greens to mix in and some cassava chips for dipping. It was a good idea for a mobile station but I found it a bit too bland. Aguachile is all about the spicy, citrusy kick. Even my chile-averse wife thought it needed more pepper.

One of the other items on the plate went in the other direction. The Peruvian scallop dynamite had so much seasoning that the delicate seafood was overwhelmed. These tiny shellfish are a fad item that kitchens all over LA are experimenting with, but I think they’re best on a raw bar or with very delicate enhancements. The Oysters Rockefeller and items from the seafood boil all hit the spot, and I liked the artichoke, mushroom, and fava bean salad enough that I took seconds even though there were plenty of other options to explore. The Catalina Kitchen uses very high quality produce and knows how to show it off.

The concept of the buffet is stretched a bit by the bar offerings, which include a design-your-own-cocktail table with quality spirits, mixers, and a selection of various flavorings like juniper berries, lemon and orange peels, and appropriate herbs. It’s a nice idea and a chance for a cocktail enthusiast to have access to more ingredients than they have at home, but during the time I was there I didn’t see anybody taking advantage of it. The spirits bar was in a poorly lit section away from the main path between the buffet and seating, and most people never looked at it. We decided instead to celebrate the peninsula with pours of two local Chardonnays, Villa Oneiro and Catalina View vineyards. They’re both excellent but very different from each other, and if you enjoy comparing them this is one of the few places that stock both by the glass.

It was time for the second trip and tastes of seafood saffron risotto (very moist and flavorful), grilled swordfish with heirloom tomato, baby eggplant, and cipollini onions (one of the best items of the evening), clams casino, roasted vegetables, nibble-sized pieces of prime rib, tri-tip, and house-made sausages, and lobster mashed potatoes with leeks. As I read the sentence I just typed it looks very much like I have described six meals, but the plate wasn’t heaped high – I had an hors d’oeuvre sized piece of each. I wanted to try everything and then go back for the items that I liked the most, so I had to resist the temptation to get too much of anything. Some other patrons obviously had a different strategy and had impressive mountains of food on their plates, but I’m not judging here – they evidently knew what they liked and wanted plenty of it.

The grilled meats from the carving table were all just as expected except for the hot link sausage, which had a scorching heat that would please any spice enthusiast. I liked the small piece that I had but could hardly imagine consuming a whole one. The meat items were well accompanied by the lobster and leek mashed potatoes, which were creamy and had large chunks of lobster, and the “steakhouse mushrooms” in an onion and garlic demi-glace. While the seafood is a principal attraction here, there is also a charcuterie and cheese section and you can make a good meal on the meats and vegetable items.

(Oddly, the only chicken item on the whole spread was fried chicken tenders with waffle fries. Roasted or rotisserie chicken might be a better choice, since the breading turns soft on the buffet. I tried a piece and it was better than I expected but still not up to the level of most other items.) 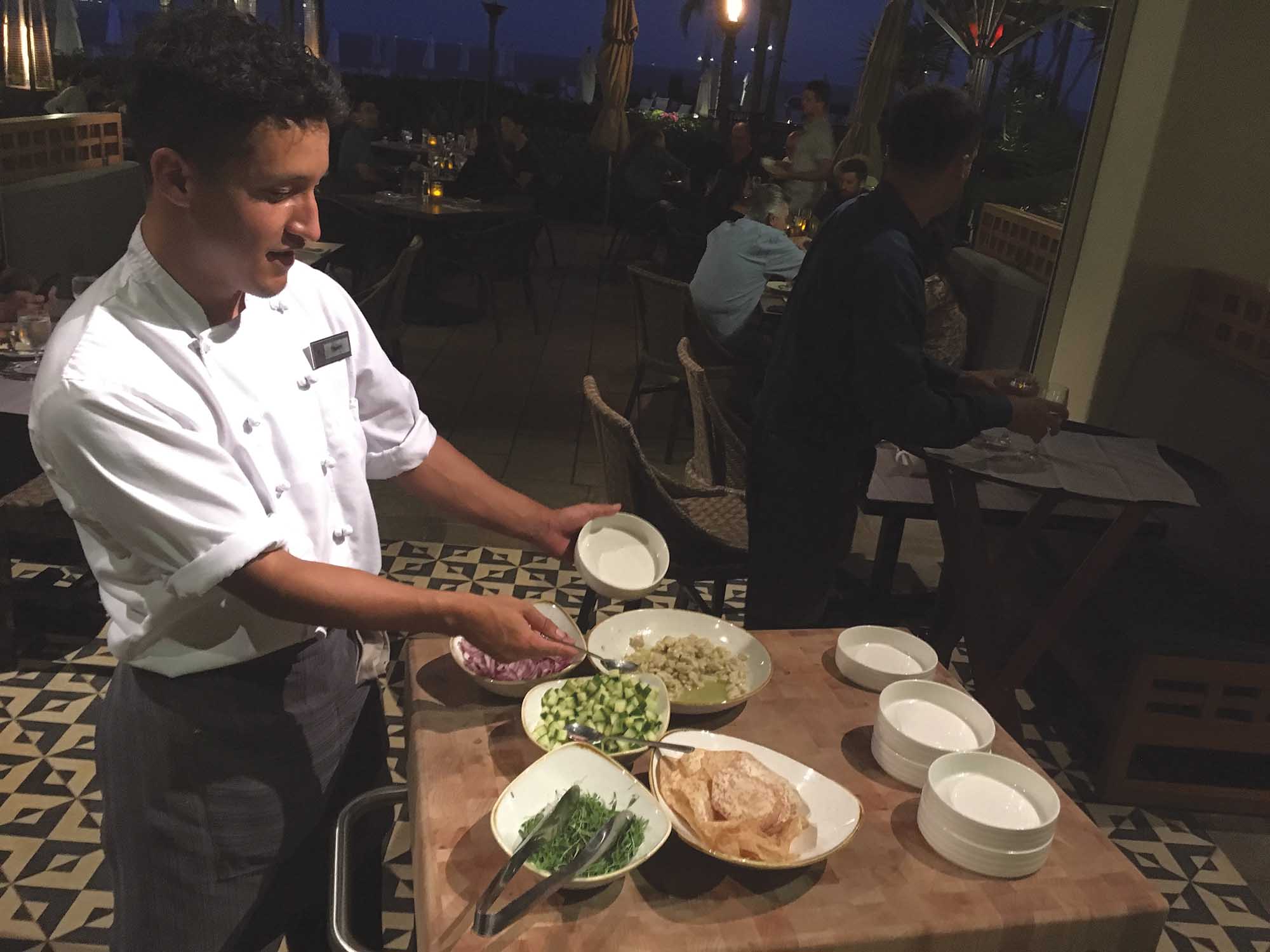 Aguachile is made tableside from rolling carts. Photo by Richard Foss

When we got back to the table, we were greeted by another server with a food cart, this time making an unusual variation on avocado salad. Think of guacamole with plums in it (and hear me out because really, this works). You know how guac sometimes contains chopped tomatoes that give it a slight fruity flavor? Take that fruity flavor and amp it up and you have a really different taste treat. It was finished with cotija cheese and micro-greens and served with chips, and the highest compliment I can give is that I intend to steal the idea and see if I can do it as well.

After finishing this plate, we decided we were done with savories and moved to dessert. There were slices of apple and pecan pie, chocolate and lemon bundt cakes, brownies, cookies, and a selection of gelato. We weren’t in the mood for ice cream so decided on pie, and I stopped by the charcuterie bar to pick up some cheese to finish. Both pies were too sweet for our tastes, but the pecan was better because the nut flavor was assertive enough to provide some balance. I stopped by the charcuterie and cheese bar and picked up some pieces of fiscalini and blue to finish the meal.

On a whim I ordered something from the drink menu that had made me curious. This was an old fashioned that was described as “prepared in an ice sphere and cracked tableside.” Sure enough, a server showed up with a liquid-filled ball of ice and handed me a small ball-peen hammer. I whacked it, being careful to miss the glass, and he garnished the shattered sphere with a twist of orange. It was a good cocktail and a novel way of serving it.

At this point, we were comfortably full but not overstuffed, and we hadn’t even explored some food options. I didn’t try the seafood tom yum soup or made-to-order pasta station, among others. I didn’t want to eat myself into a coma trying to sample absolutely everything. It was a pleasing dinner of about 30 highly varied snacks, and a very satisfying one.

As to whether this will catch on with locals, I’d give it a good chance. At $75 per person it’s not out of line with dinners elsewhere on the Peninsula, and you can go here with picky eaters or those with dietary restrictions with the certainty that everybody will be able to find something. My advice is a seat on the patio where you can enjoy the moonlight through the trees, pace yourself, and watch for those carts in case the one with the avocado salad is making the rounds.

The Catalina Kitchen is on the lower floor next to the lobby elevators at Terranea, open Friday only 5 p.m. to 10 p.m. Valet parking $10. Reservations at (310) 265-2836 or online via OpenTable link at terranea.com.