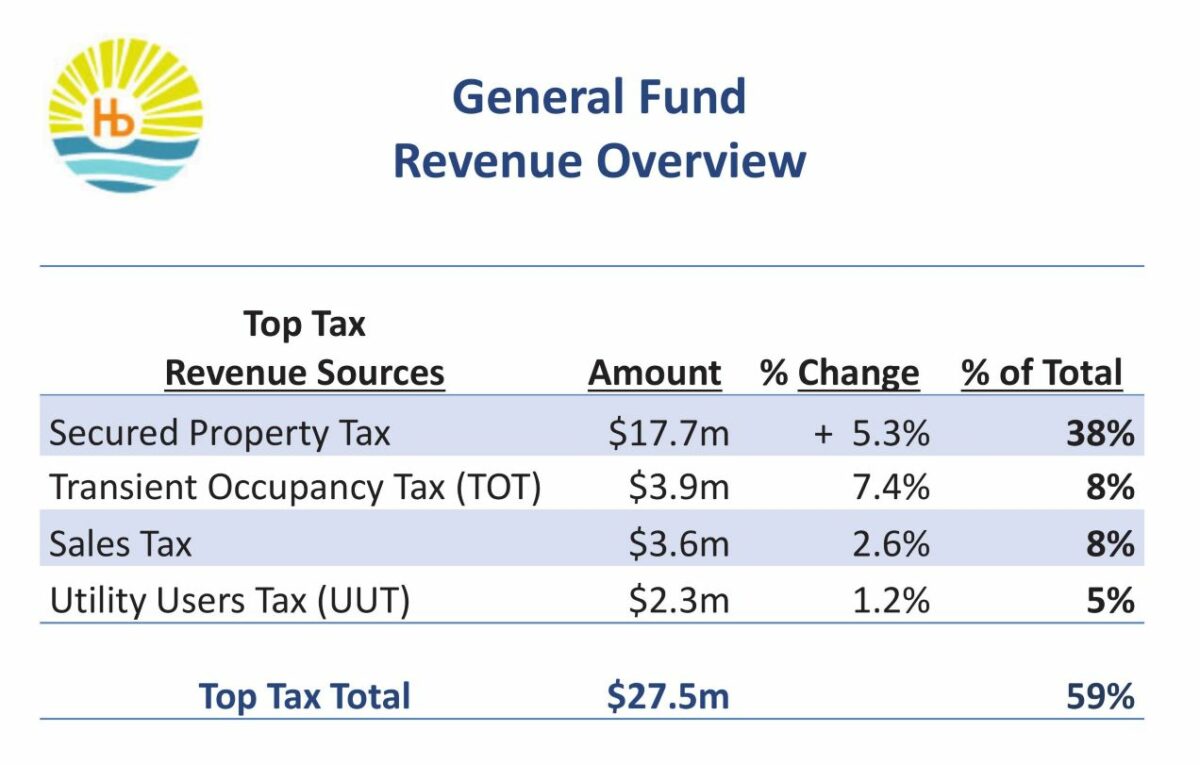 Hermosa Beach’s four largest income sources are projected to increase in the coming year, according to the 2022-23 Budget Overview presented by City Finance Director Viki Copeland to the city council at its Thursday, June 2 budget workshop. But the increases won’t be sufficient to balance the projected $48 million budget.

To balance the budget, the city will spend $1.3 million of its remaining $2.3 million American Rescue Plan Act (ARPA) funds, Copeland told the council. The city has received $4.6 million in ARPA funds. It spent $2.3 million of it in fiscal year 2021-22. 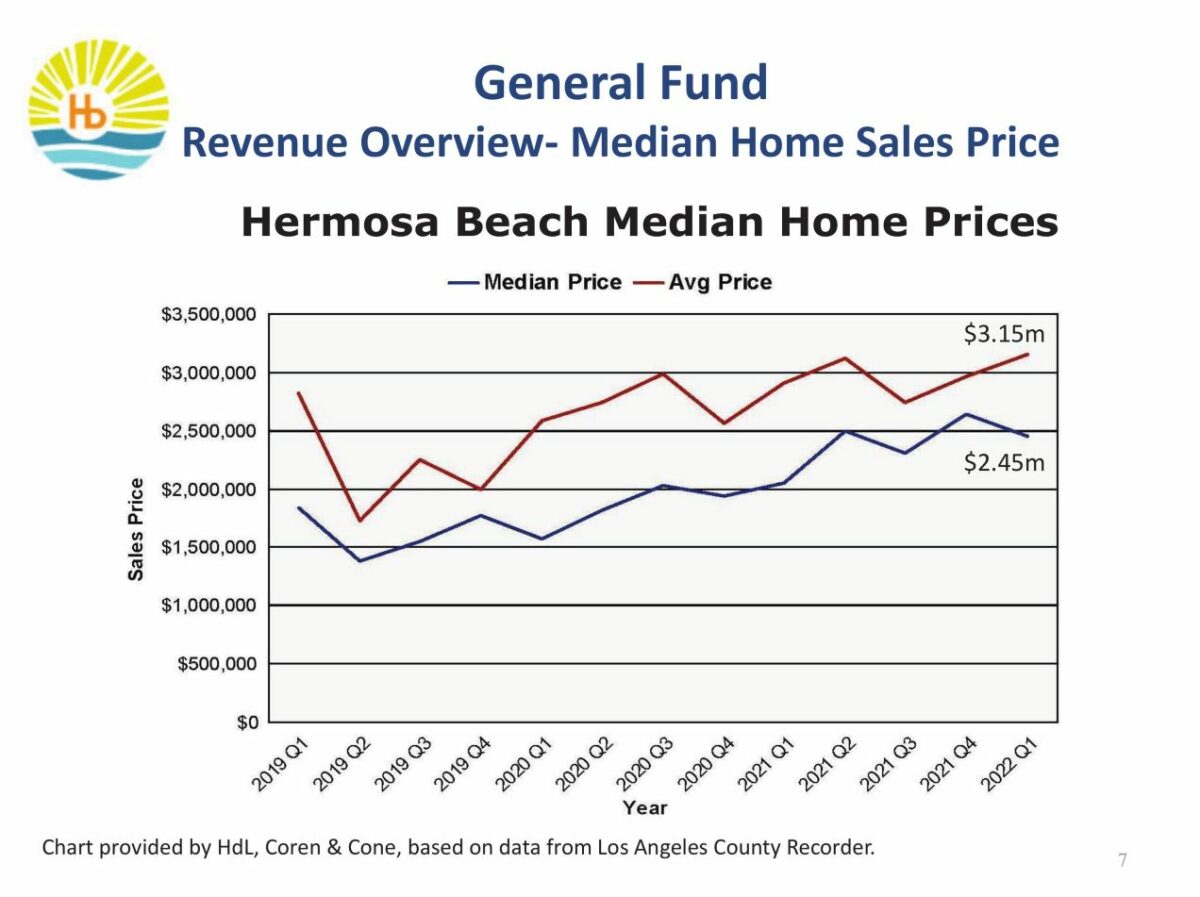 The Budget Overview shows property taxes up 5.3 percent, to $17.7 million, as a result of average home prices surpassing $3 million in 2022.

The transient occupancy tax (TOT) is projected to increase 7.4 percent, to $3.9 million, surpassing sales tax for the first time as the city’s second largest source of income. Copeland said occupancy rates skyrocketed from a low of 23 percent during the pandemic to the current 73 percent. The opening of the H2O hotel, and the downtown’s five Airbnb rentals contributed to the projection increase, Copeland said.

Sales tax revenue was projected to increase 2.6 percent, to $3.6 million, led by “dining/drinking places.” Restaurant and bar sales tax revenue jumped 46 percent in the second half of 2021, accounting for 30 percent of the city’s total sales tax, according to the budget overview.

The Utility Users Tax (UUT) is projected to increase 1.2 percent to $2.3 million. Copeland said streaming services are a potential source of new UUT revenue, which has been flat in recent years.

“Our consulting firm is pursuing streaming companies, including Amazon, Disney, and Netflix. Hopefully, we’ll get an agreement under which our UUT ordinance will apply to those services, but negotiations are going slowly,” Copeland said.

The budget overview received general approval from the council, with the exception of Council Member Ray Jackson, who questioned the need for so many proposed studies. The proposed study cosnts totaled over $2 million

City Manager Lowenthal responded, “I never allow someone to borrow my watch to tell me the time.”

Jackson asked if money proposed for the studies might not be better used to reduce the backlog in capital improvement projects.

She defended Jackson’s questioning of a proposed $100,000 city procedures study as necessary to address complaints about the city’s slow permitting processes.

“What is the ultimate objective of spending $500,000 to study bollards along The Strand,” Jackson next asked. “Are we looking at blocking off all access to Pier Plaza, and The Strand… At the end of the day, it might be the ‘train to nowhere’….If we want to secure Pier Plaza, we can put in concrete planters.”

Chief Paul LeBaron responded, ‘We’ve had numerous breaches of cars at full speed on The Strand. It’s usually someone following their GPS. Permanent barriers won’t work. We need something retractable, that will go up and down.”

“Do you want the ability to shut down the entire Strand, at any given time?” Jackson asked.

“To vehicle traffic. That is correct,” the chief answered.

Jackson then questioned the need for a “facility condition assessment” of the civic center.

“Do we need a study to tell us we have inferior facilities? That’s another $600,000. Would a better use of that money be to look at moving City Hall to the storage lot [a city-owned property across from City Hall]?”

“We did a conditions assessment several years back. We’d like to update it,” Lowenthal responded. “If rebuilding [city hall] was a foregone conclusion, then we would not go to this expense. But I don’t believe it is, for financial reasons.”

Jackson asked if the proposed $500,000 Parks Master Plan, and the separate bleachers, lighting, and pickleball studies shouldn’t be combined as one “comprehensive look.”

Lowenthal responded, “The pickleball, bleachers, and lights are for current programs. The master plan is to provide feedback for future park programs.”

She noted that the city’s last Park Master Plan was completed in 1990.

Councilman Justin Massey asked if the $2.2 million budgeted to improve the city yard  included the $500,000 proposed to study improving the city yard.

Finance Director Copeland said the numbers are not inclusive.

A proposed $420,000 study of business license fees, and a $60,000 traffic analysis of the downtown lane configuration are also included in the Budget Overview.

Meter upgrades are proposed because the current meters are not compatible with new mobile network services.

Armato suggested, “Maybe allocate the $150,000 for removal of the parking meters, which are a maintenance headache. I doubt we want to invest in more parking meters when better parking solutions exist. Metlox Plaza (in Manhattan Beach) has changed from meters to a central pay station.”

The council was supportive of the proposed hiring for six positions left vacant during the pandemic.

Lowenthal said staffing was down 15 percent to 20 percent during the height of the pandemic.

Massey, expressing a sentiment shared by his fellow council members said, “I’m happy to see we’re adding staff in public works so we can get caught up on capital improvements projects, and that we are unfreezing police positions.” ER