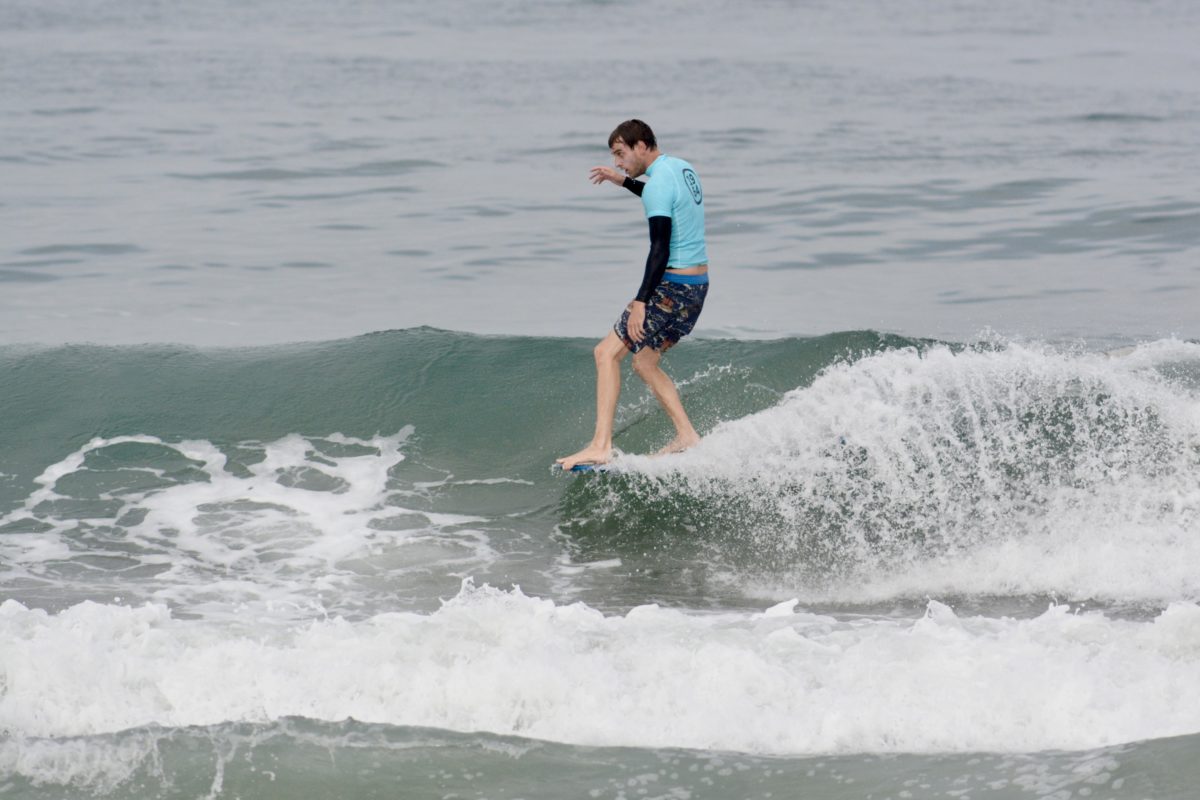 Christian Stutzman steps up to victory in the ISF longboard surf contest. Photo by Morgan Sliff.

A new format for the International Surf Festival Surfboard contest was complimented by a powerful, head high swell at the Manhattan Beach pier on Saturday. Contest director John “JJ” Joseph did away with the conventional age and shortboard divisions in favor of an open longboard contest. A $1,000 cash purse was split among the top finishers, with the winner receiving $400.

There was no easy heats.

Dave Schafer brought along two new Jose Barahona surfboards. Schafer is a perennial podium finisher in the South Bay Boardriders Contest Series and made it well known to everyone he was out to win. He pulled out all the stops on Saturday, beginning with his famous fin-first takeoffs. Todd Jacobs got some good nose-rides and Beck Cherry hung on while coming off the top in shallow water. Hiro Akieda had been practicing in front of my apartment for the last three weeks and got enough long rides to advance to the semis. 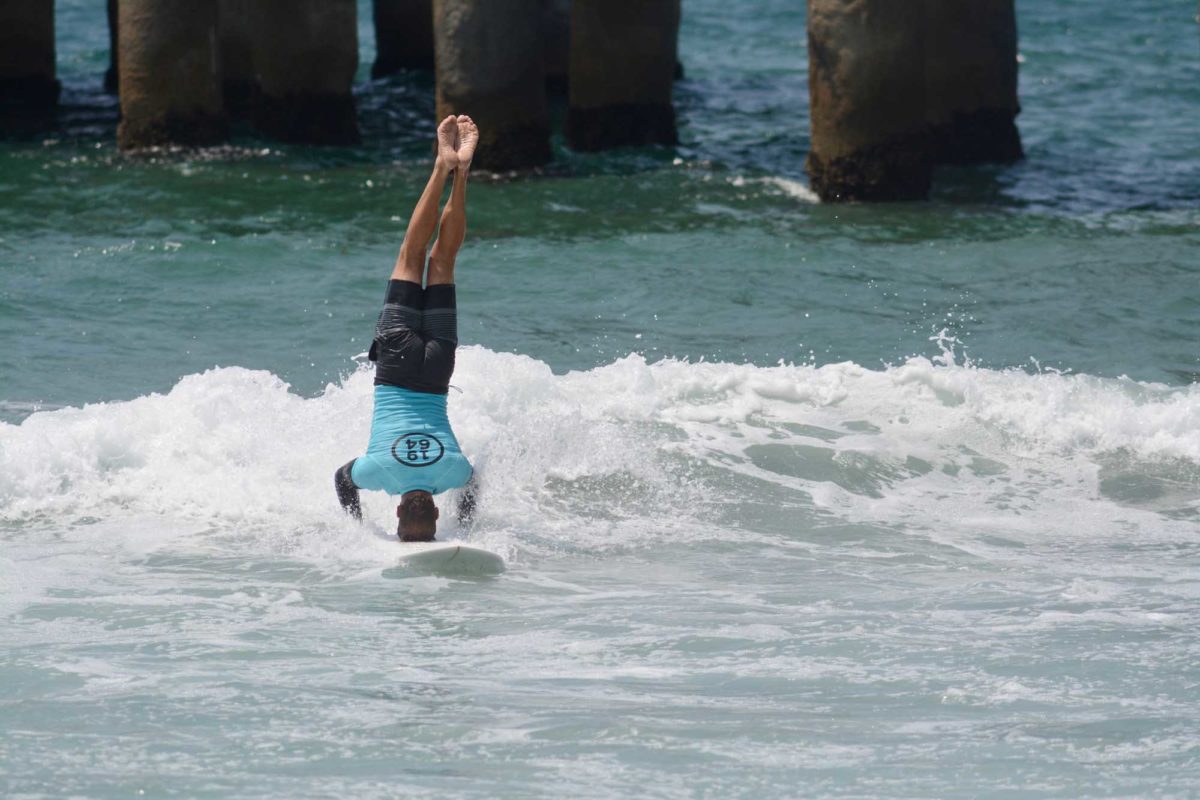 Dave Shaefer naps on the nose during the ISF Longboard contest at the Manhattan Beach Pier. Photo by Morgan Sliff

Troy Campbell is a finalist in every contest he enters, but he seemed lost in this contest. Christian Stutzman nose rode a walled up wave to the sand while Torrance’s JR Castillo’s first wave was a nose ride that looked like it would win his early eat. Will Allen surfed like a 15-year-old  David Nuuwhia. Andrew Neal was a surprise contender, hanging five and then 10 on big closeouts and somehow breaking through the whitewater. 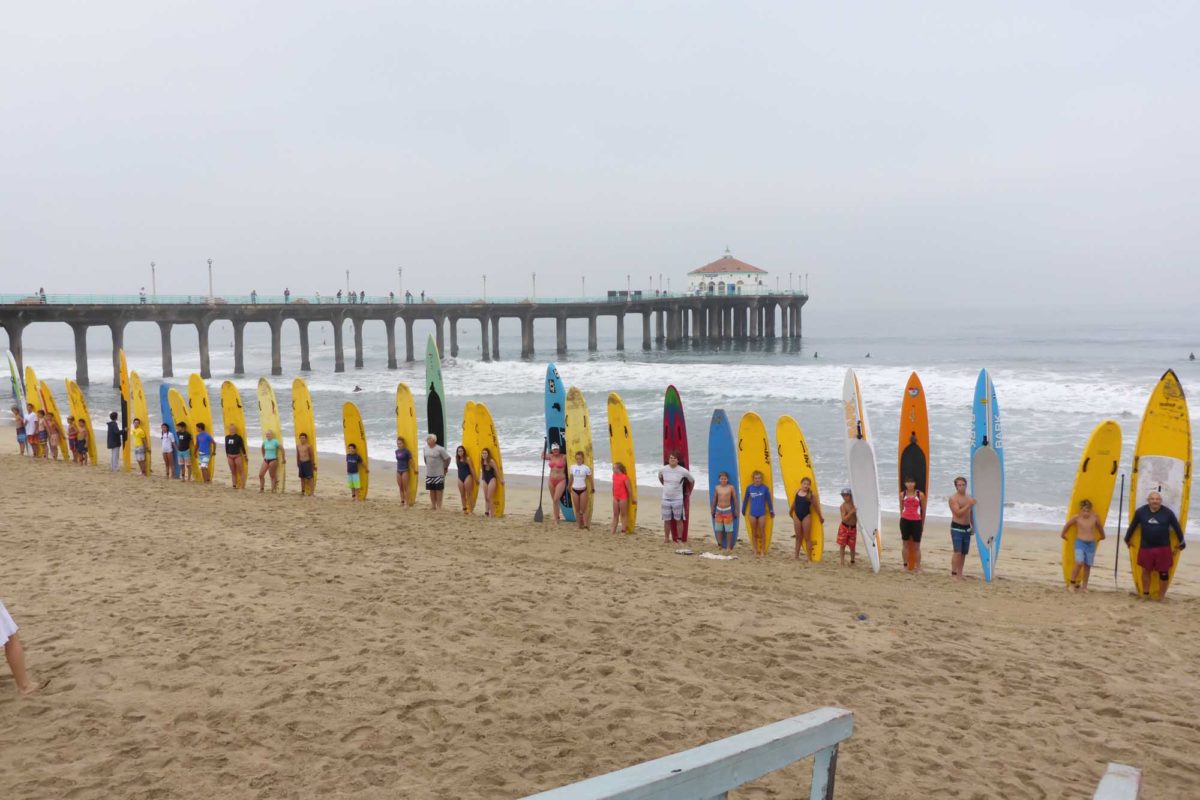 Over 150 paddlers participated in the International Surf Festival Velzy Stevens Pier to Pier Paddleboard Race. Members of the South Bay Boardriders Contest, which organized the race, shagged boards at the finish to prevent collisions in the large surf. Photo by Kevin Cody

In the women’s division, Lisa Whitaker got some outside closeouts that reformed as perfect left bowls on the inside. “It’s a lot better than it looks,” she said after her heat. Morgan Sliff hung five on a solid right and rode it all the way down the line to win the women’s division. “The wind came up but the tide came up at the same time giving it some shape,” she said.

In the last semi, Schafer was up against Will Allen and Dan Cobley. He did fin-first takeoffs, 360s, headstands and shot the pier twice. But Cobley and Allen did the same, with the exception of headstands. Cobley almost pulled off a carving 360 on a set wave but spun out.

The heat was so close that contest director Joseph declared, “It’s a 3-way tie so we counted back two more waves, sending Dan and Will to the finals.”

Cobley found some nice lefts but fell at the end while Allen looked smooth and under control all the way to the sand. Costello appeared to have the heat won with several long, smooth nose rides. Then, the biggest wave of the day came in during the final minute of the heat. Stutzman stood up fin-first on the 5-foot wall, ran to the tail block and hung five with the board still going backwards. Then he hung 10. Then he turned the board around, was sucked over the fall, landed it, and rode the nose to the beach to win the contest. 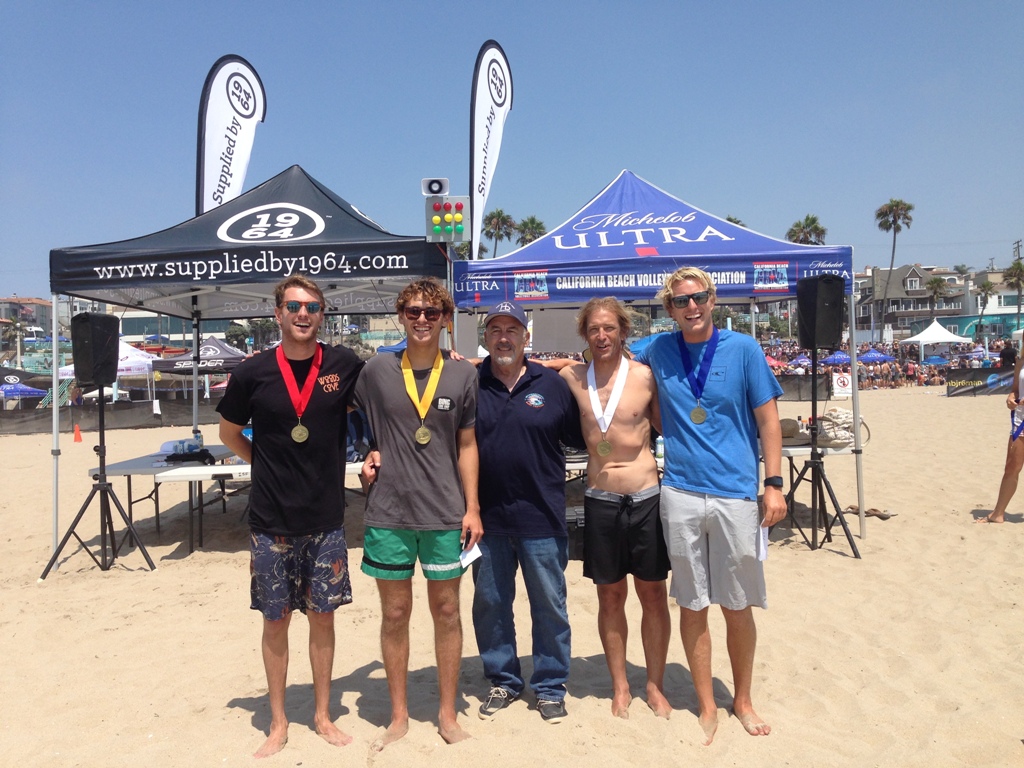