Sushi without the show [restaurant review]

Is restaurant sushi worth the premium over supermarket sushi? Our reviewer puts them to the test 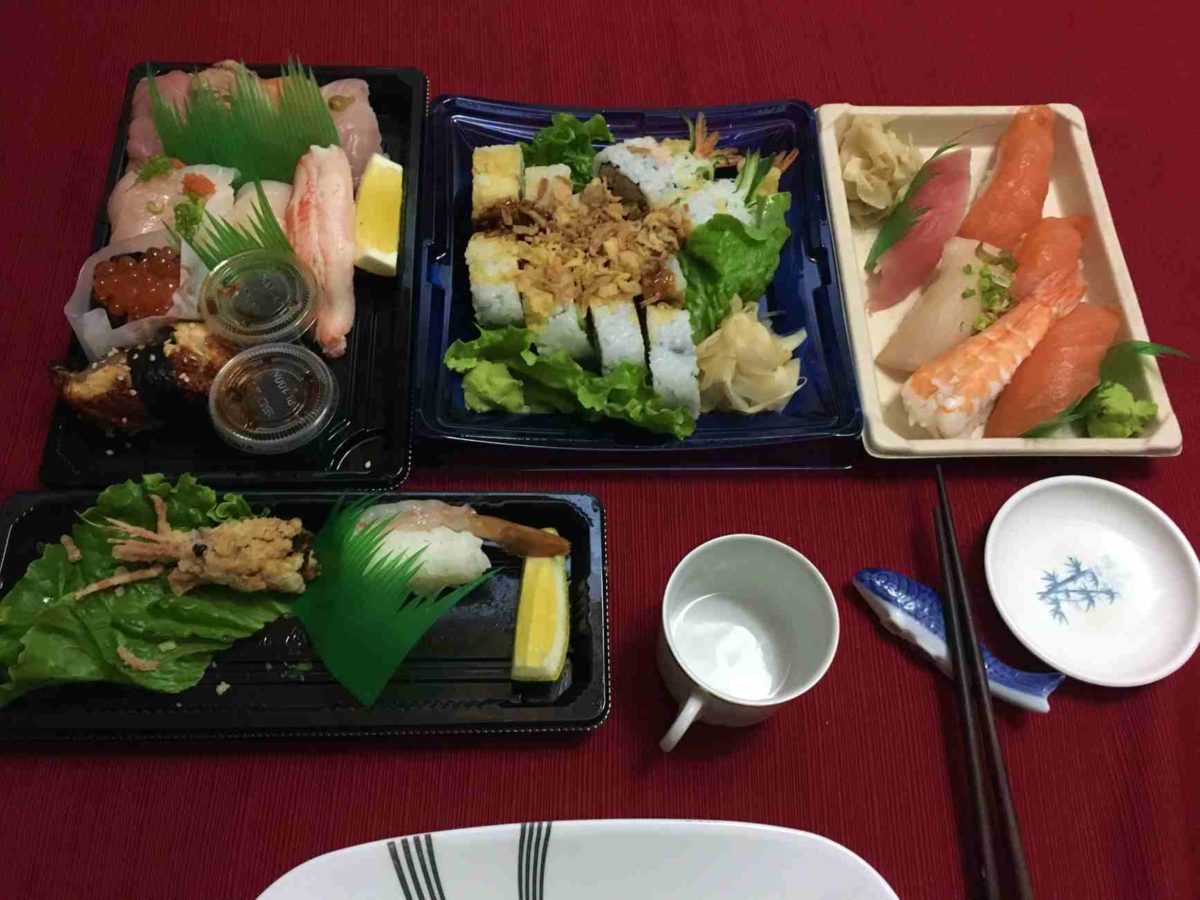 An array of sushi from Gelson’s (left) and Izakaya by Katsu-ya (right). Photo by Richard Foss

You may be surprised to know that getting your sushi in a restaurant rather than to go is quite modern. Sushi was a street food, a snack picked up from roadside stalls in Tokyo, and it wasn’t even well-known in the rest of Japan until the 1920s. Sushi didn’t come indoors until after World War II, and that was done mainly to conform to sanitation regulations. When the first sushi bar in America opened in 1966 in LA’s Little Tokyo, they imported an institution that had existed for less than 20 years.

By then a ritual had already developed: the host’s shout of irrashaimase! to greet customers, the advice about what is freshest from the itamae behind the counter, and then the slow, sensuous pace of a meal consumed bite by bite with pauses for sake and conversation. It’s a delightful and civilized experience, but personal distancing means that this style of dining has come to a halt. We can still get sushi, of course, from both our favorite restaurants and increasingly from grocery stores, but that sense of Japanese hospitality is gone.

Given that we are all getting everything to go, can restaurants that usually offer the leisurely sushi bar experience justify their generally higher prices? My wife and I decided to find out by getting pre made sushi from a high-end supermarket and ordering omakase from the most popular sushi bar in Manhattan Beach, then trying them side by side.

I swung by Gelson’s, which has a sushi chef in house, and picked up a crunchy tempura blue crab roll and a mixed sushi assortment. Then I headed for Izakaya by Katsu-ya for the 10-piece combination of the day. When laid out side by side both were attractive. The Gelson’s nigiri sushi were almost twice the size of the ones from Izakaya, and when you looked at them closely, they had a slightly less glossy sheen. I used kitchen scissors to cut each piece so we could compare them and make notes.

We decided to start with an item that appeared in both: the salmon belly. The thick slab from Gelson’s was pretty good, a rich mouthful with just the slightest hint of the wood smoke used to cure it. We were happy with it until we tried its counterpart from Izakaya, which had a richer, purer flavor. This was because it had been cut much more recently and the fats in the fish hadn’t oxidized, something that is most noticeable in the oily salmon. A piece of halibut from each suffered less by comparison, though the scallions that topped the premade piece had lost a bit of their crunch and sharpness.

The size of the pieces made a difference, the items from Katsu-ya a rich nibble of seafood with slightly tart vinegar and seasonings, the Gelson’s noticeably meatier and more filling. We also noticed a difference in the rice, which was a bit drier and chewier in the premade sushi. Some people prefer it this way, though I like the moister and more aromatic variety. This was particularly noticeable in the crunchy blue crab roll, which had a nice flavor but chewy rice, and also had lost its crunch because the moisture of the rice was transferred to the tempura.

An item from Katsuya showed just how quickly this problem can happen. Their assortment included sweet shrimp, an item that involves a crustacean fresh from the tank that is very quickly filleted, with the head battered tempura style and deep fried. When I opened the package, the tempura was still warm having been made only minutes before, but it had already become soft in the carton with the rice and seafood. This is something that most Japanese don’t mind, as they often submerge tempura items in soup, but if your appreciation for tempura is all about the crunch, you probably should reconsider ordering it until you can have it fresh.

Another item from Katsuya also had the same problem, an order of salmon roe that was wrapped in soy paper. The roe was fine, but the soy paper had become surprisingly tough and chewy. It would have been better wrapped with seaweed, and if I order this again, I’ll ask for it that way. The other nigiri items survived remarkably well, and we blissfully enjoyed bluefin tuna and toro, snow crab, albacore, grilled eel, and other delights. The highlight was a rich, fatty slice of jumbo scallop, which had an almost gelatinous texture and freshness like breathing sea air.

To go with our meal, I had picked up a bottle of Momokawa medium dry sake, which is made in traditional style at a craft brewery in Oregon. Gelson’s sells this for about sixteen bucks and it’s a steal, a classic junmai ginjo style that might be compared to an unoaked Chardonnay. If you like sake at all you might want to pick up an extra bottle to keep around the house, because it’s a classic at a modest price.

Was a comparison between prepackaged sushi from a grocery store and the custom-made version from a boutique restaurant an entirely fair comparison? No, even though I went to Gelson’s because I expected theirs to be the best supermarket version in the area. Had I gone during the time when the store’s itamae was chopping away at his counter and ordered fresh items, this would undoubtedly have been a closer race. No matter how fresh the fish and how artfully it was prepared, the chemistry that oxidized the seafood and transferred moisture from the rice to the tempura is inexorable.

So will I still get supermarket sushi? Sure, because it’s a quick snack or appetizer for a meal at home, and convenience counts for something. There’s also the matter of economy, since the Gelson’s sushi ran just about $24, while the Izakaya by Katsu-ya sushi ran almost exactly twice as much. On one day I might pick one, on another day the other, but now I’ll do it with a better-informed outlook.